Nearly three million Iraqis have been displaced since January 2014 due to fighting between the self-proclaimed Islamic State and government forces. We explain the different waves of displacement.

In late December 2013, a group of Islamist militants crossed into Iraq from Syria in a bid to claim the cities of Fallujah and Ramadi, in Anbar province west of Baghdad.

The Iraqi government responded with an aerial bombing campaign and a siege ensued. In the weeks and months that followed, several hundred thousand people fled the area, many going north to the semi-autonomous Kurdistan region.

As early as January, the United Nations raised the alarm about a “critical humanitarian situation” developing, but few registered these events in Anbar, putting them down to just another chapter of unrest in post US-invasion Iraq.

Five months later, when the same militants – rebranded by now as the Islamic State (IS) – seized control of the Iraqi city of Mosul, triggering more than half a million people to flee their homes in just a few days, the world woke up.

Aid agencies, already struggling to support some 400,000 people who had fled Anbar, on top of a Syrian refugee population of 240,000, scrambled to respond. 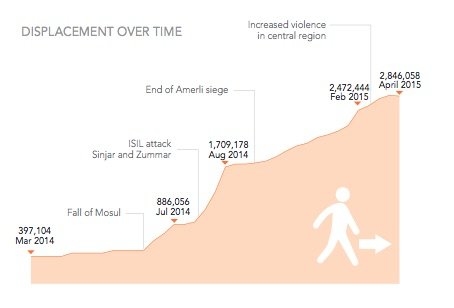 Among those fleeing their homes were large numbers of Christians, as well as thousands of Yazidis, followers of an ancient religion related to the Zoroastrian faith.

IS, which advocates a hardline interpretation of Sunni Islam, is highly intolerant of other faiths, and views Yazidis and even Shia Muslims, as apostates.

SLIDESHOW: Life after death in Iraq

As IS has seized new territory, and as various military factions, including the Kurdish Peshmerga, the Iraqi armed forces and other militia groups, some from Iran, have fought back, there have been steady streams of people seeking refuge.

Yazidi children, women and men who fled Sinjar Mountain re-enter Iraq from the Syrian Arab Republic, at a border crossing in the town of Peshkhabour in Dohuk Governorate. August 2014 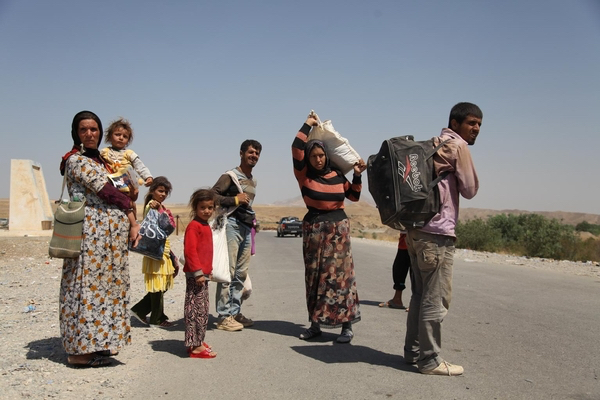 In March this year, IS was driven out of Tikrit, causing yet more people to flee, many of whom had been trapped in the city for months.

In May, the Iraqi military tried to seize back parts of Anbar, but ended up losing territory to IS, and in the space of few weeks more than 230,000 people had again been displaced, according to UN estimates.

As of June, the UN’s displacement total had reached 2.9million, on top of an existing one million still uprooted from early conflicts.