Read about what we achieved.
MAGUINDANAO

Humanitarian agencies are struggling to cope with a growing number of people displaced by fighting in the southern Philippine region of Mindanao.

In the town of Talayan, a lone fire truck distributes water every day to the more than 1,000 families who’ve sought refuge there. “The fire truck can load up to 1,000 litres of water. It is not nearly enough for the people,” said Edzela, adding that the truck is only able to make a maximum of three trips a day.

Alikan Santiago, a 24-year-old fish vendor, his wife, two young children, mother and grandmother joined around 300 other families sheltering in a covered basketball court. Fighting broke out last week around their home some nine kilometres away.

“It’s very hot and there is not enough water. My young kids are getting sick,” said Santiago, sitting on a mat that doubled as a bed. “Even if there is no more fighting, we have been hearing things about unexploded bombs left in the field. What if we accidentally step on them?”

Santiago and his family at least have a solid roof over their heads.

In more remote areas where road access is difficult and few public buildings are available people are living rough under makeshift shelters constructed by tying tarpaulins and blankets to poles or trees.

Hoping for an early return home

Muhaipha Tasil, 13, and her family have not bothered to unpack most of their belongings, hoping that the military offensive will be short-lived and they can soon go home.

“Sometimes it’s hard to sleep in the evening when you hear the gunfire or the airplanes. The louder the scarier—it sounds so near,” said Tasil.

More than 120,000 people have displaced by the latest fighting between government forces and rebels of the Bangsamoro Islamic Freedom Fighters (BIFF) in the southern philippine region of Mindanao. The fighting erupted in January 2015 following an anti ter 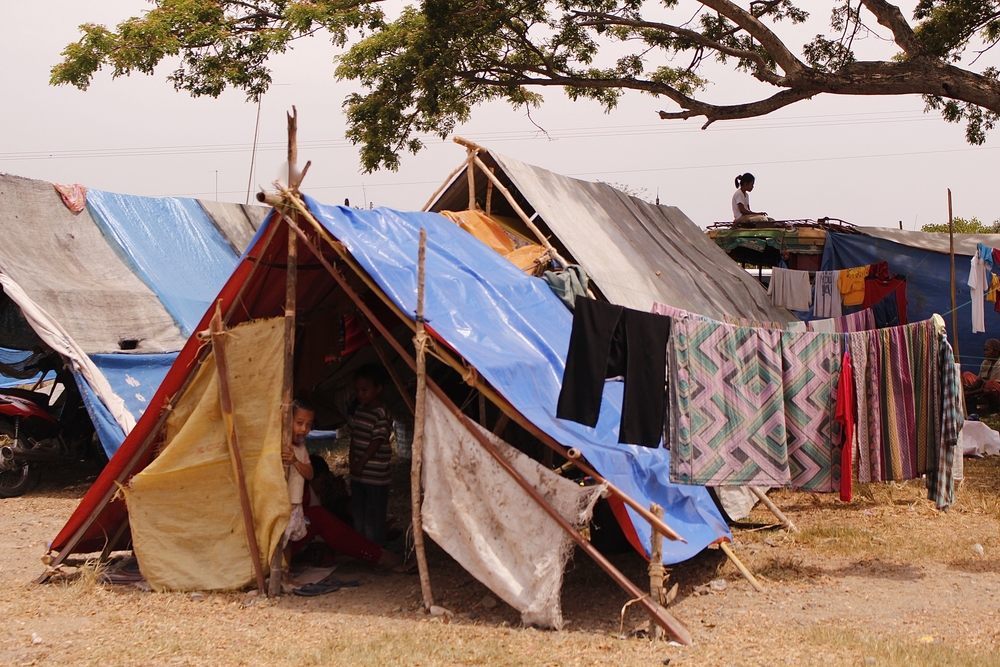 Banking on an early end to the crisis, regional authorities have not set up formal camps for the displaced.

But a military operation originally intended to last just 3 days has now dragged on for more than three weeks, and despite assurances that the fighting will soon be over there is little sign of this.

“As long as there are threats from these lawless groups, these peace spoilers, we will continue with this law-enforcement operation,” said army spokesman Lt. Col. Harold Cabunoc.

“It’s very hot and there is not enough water. My young kids are getting sick.”

The fighting follows a botched operation on 25 January to capture or kill three suspects the government accuses of terrorism – including a Malaysian alleged bomb-maker known as Marwan, who is believed to have been involved in the 2002 nightclub bombings in Bali, Indonesia. The men were being sheltered by BIFF who responded forcefully to the attempted raid. At the end of the initial firefight, 44 special police troops, 18 rebels and 6 civilians were dead. Marwan was also killed but the other two suspects escaped.

Over its four decades, the conflict has repeatedly caused people to flee their homes. An estimated two million were displaced between 2000 and 2007, according to the Internal Displacement Monitoring Centre, a Swiss-based think tank that monitors displacement around the world. There had been hopes that peace would bring a measure of stability and allow people to restore livelihoods in this mineral rich province.

But instead, the latest fighting has added to the numbers being assisted by overstretched local authorities. Rains due in April are likely to worsen the situation.

The regional government is currently spending about Php12M (USD 217,000) per week for the distribution of food packs containing rice, noodles and canned goods that can sustain a family for three days.

If the fighting extends beyond March, local government could run out of supplies, according to Laisa Alamia, executive secretary of the Autonomous Region in Muslim Mindanao.

“We were not expecting this (protracted fighting). Our budgets were all allocated for the transition to the new government. We are calling on other partners and aid agencies to help us.”

Local families are doing what they can to pitch in.

Abdullah Sema, a 64-year-old farmer, and his wife Ida are hosting more than 20 relatives who fled the recent fighting.

Sema’s home, made of boarded up wood and corrugated steel, was barely spacious enough for the couple and their four children. Now they are struggling to accommodate the new arrivals. Sleeping has become a nightly challenge, with some forced to bed down in the outside kitchen.

“Even the dining room table becomes a bed,” said Sema, who would never dream of turning his relatives away, but admits that “budgeting food and having to sleep like sardines every night” is becoming increasingly difficult.

“The unstable security situation makes it difficult to assist the displaced especially in the far-flung areas,” said Lany dela Cruz, communications officer for the International Committee of the Red Cross (ICRC).

Many of the displaced have been unable to access their farms, so crops due to be harvested in April and May have spoiled.

“This could only mean food insecurity in the short-term and deeper poverty in the long term,” said Lyca Sacrenas, conflict transformation manager for Oxfam.

“That is what feeds the conflict in the first place.”