The UN refugee agency has placed an order for 10,000 flat-pack refugee shelters designed by a social enterprise arm of furniture giant IKEA, with first delivery planned within months to camps across Iraq, where some 2.5 million people have been displaced by conflict.

Work on the Better Shelter units began more than five years ago and a prototype was unveiled in 2013.

Now, after an 18-month pilot involving 40 families in refugee camps in Ethiopia and Iraq, UNHCR says the design is ready to be rolled out to scale. Each shelter is designed for a family of 5 or 6.

“The units comprise the best elements of a tent in that it’s pre-packed, of minimal weight and produced to core standards, but it also has a rigid, self-supporting frame and it provides more physical security and dignity for its occupants,” explained Shaun Scales, chief of shelter and settlement at the UN's refugee agency UNHCR, making the roll-out announcement at the Dubai International Humanitarian Aid and Development (DIHAD) conference.

With floor space of 17.5 square metre and made from a lightweight steel frame and plastic panels, the shelters have been designed to withstand both extreme heat and severe cold.

They are 1.75 metres high and, unlike tents, allow people to stand up straight inside. They have lockable doors, ventilation, solar panels, mosquito nets and lights. 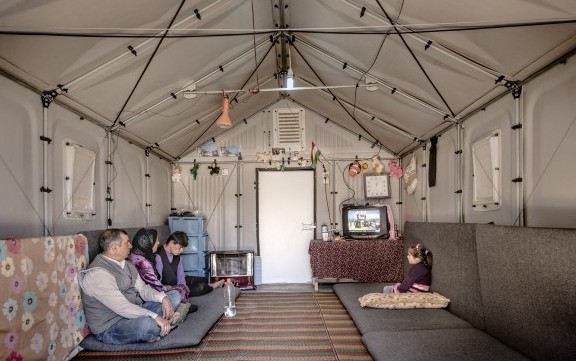 Anders Rexare Thulin, managing director of Better Shelter, the non-profit social enterprise funded by the IKEA Foundation to design and produce the structures in partnership with UNHCR, told IRIN: “The refugees have been involved in the process from the beginning.

"We have received regular feedback from families living in the structures, and we made sure we incorporated their comments in our design.”

At a cost of US$1,150 each, the shelters cost three times more than a standard UNHCR tent, but while tents are designed to last for just six months, these new shelters last for a minimum of three years in harsh conditions, and up to 20 years in more temperate climates.

“They may cost more initially, but they last a lot longer and are therefore better value,” Olivier Delarue, UNHCR Innovation lead told IRIN.

He added: “This is a real example of how the private sector and public sectors can come together to make something new. UNHCR shouldn’t be designing shelters, we should be harnessing the expertise of others, and who better to make a flat-pack shelter than IKEA.”

The IKEA shelter is not the first non-tent solution for refugees and IDPs: the Norwegian Refugee Council is piloting a similar type of structure in a refugee camp in Jordan and elsewhere in Jordan a number of Syrian families are living in container homes provided by Gulf donors.

More than 2.5 million people have been internally displaced in Iraq since January 2014, the majority fleeing the territorial advance of the group calling itself the Islamic State. The country is also hosting more than 220,000 Syrian refugees.