Frustrated by a resurgence of intercommunal conflict, Kenya's top humanitarian official has called on President Uhuru Kenyatta to make good on a threat to deploy the army in perennially restive areas in the country's northeast.

"The head of state is fully aware of this situation," Abbas Gullet, secretary-general of the Kenya Red Cross Society (KRCS), told IRIN in the wake of renewed clashes between the Garre and Degodia communities in Mandera County.

"He has met the leaders of these two communities [in 25 June] and he had given them his own ultimatum that they either put their house in order or he will be forced to go in [with army troops]. It is now time to act," Gullet said.

He added: "These are militias; these are men who are fully armed, trained and sometimes wear uniform, and go totally unobstructed to do what they want to do."

The June meeting led to a lull after months of intermittent hostilities in the county left dozens dead and more than 13,000 displaced from their homes.

This lull was broken on 22 August when the armed group stormed the town of Rhamu, (population 40,000), 76km west of Mandera town.

As of 28 August 2014, a total of 18,000 households had been displaced and are currently living in seven displacements sites within Rhamu in Mandera North sub-county. About 77 people have lost their lives and more than 95 have been injured since January due to the conflict between the two main clans in Mandera, according to KRCS. Several houses have also been torched.

"Many are living in police camps and hospitals while others have fled to neighbouring villages. The security situation has not improved and people are still living in fear of possible attacks. They are in need of humanitarian assistance," Abdi Omar, an officer with the Rural Agency for Community Development and Assistance, told IRIN.

KRCS said: "The Mandera North situation is worsening both in terms of the conflict and drought [including] fresh attacks... The county [government] has released to KRCS 340 metric tonnes of assorted food to distribute to the displaced households in the seven sites."

On 31 August, unknown people attacked a police post in Mandera County and destroyed a building before they were repulsed by security forces.

Apart from Mandera, intercommunal conflict has affected other northern counties such as Wajir, Garissa and Marsabit, where 95 people died in clashes between January and June 2014.

Between January and June 2014, at least 125 people were killed country-wide, scores injured and 215,479 uprooted from their homes, many of them in the northeast, according to KRCS and the UN Office for the Coordination of Humanitarian Affairs (OCHA).

Sanitation, shelter and healthcare services have been badly affected in many areas affected by conflict, according to the KRCS.

This has led to a spike in cases of diarrhoea, malaria and pneumonia, according to aid workers.

"while devolution was meant to reduce the feeling of marginalization, it has created minorities among minorities, as clans form political pacts and those left out have a feeling of being excluded "

Communities and clans in northeastern Kenya have historically fought over resources such as pasture and water for their livestock. The more recent conflicts have been attributed to disputes over the allocation of jobs and resources to 47 counties created under a new devolutionary political dispensation outlined in a 2010 constitution and put into effect after elections in 2013. The polls saw the election of entirely new positions: governors, senators and members of county assemblies.

Mubarak Haji, a local politician from Marsabit, said of the mood at the last elections:"All Kenyans were happy that at last resources allocation will not be determined by numerical or population strength. For our case it was same; we celebrated [after county governments were established] for weeks and intended to continue. The festival was short-lived, cut short and replaced with gun battles and mourning."

According to Abdi Mohamed, a Nairobi-based Horn of Africa peace and security analyst, "while devolution was meant to reduce the feeling of marginalization, it has created minorities among minorities, as clans form political pacts and those left out have a feeling of being excluded,"Mohamed told IRIN. 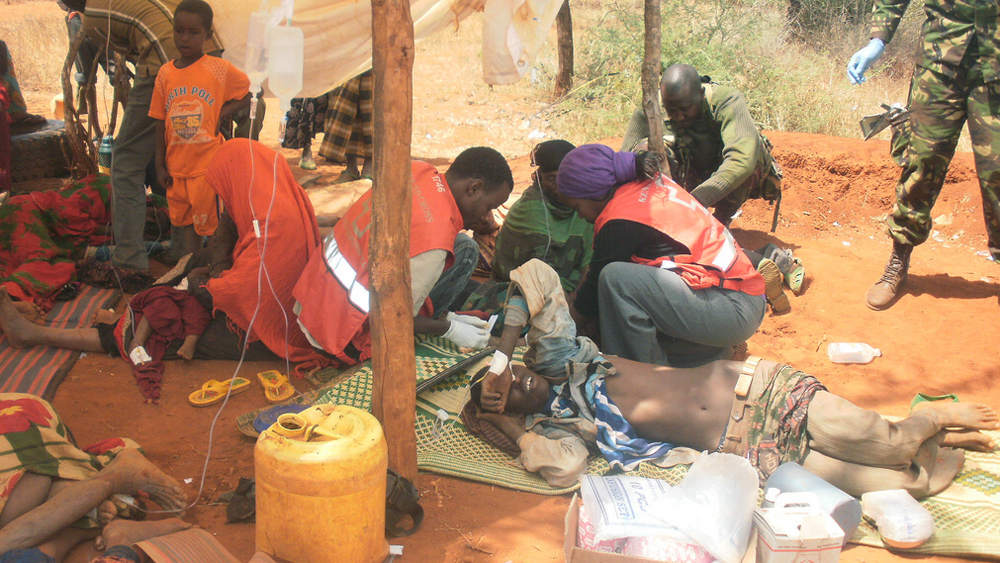 The county governments are now in charge of overseeing functions such as the provision of health care, pre-primary education, and maintenance of local roads - which were previously the responsibility of Kenya's national government. In turn, these county governments will receive a share of national revenues.

The county governments will also be expected to mobilize revenue from other sources within their counties, such as taxes on property and entertainment.

However, since becoming operational, they have collectively spent less than 14 percent of their budgets - in Mandera's case zero percent - on development projects, according to the office of the Controller of Budget.

According to analysts like Mohamed, the Degodia felt left out after the Garrre, the largest ethnic group in Mandera, forged political alliances with other smaller communities which saw them capture most of the locally elected political positions.

"That is the problem in Mandera now where the Degodia feel excluded politically, and [have] a feeling of not getting a place at the dinner table," he said.

The police and some political leaders have blamed politicians and militias from neighbouring countries like Ethiopia and Somalia for interfering in the current conflict.

"The way the conflict is emerging shows it is just a spillover into Kenya. The conflict actually started in Ethiopia, where the same communities are represented. This is [a] spillover into our country and we are dealing with it. We are yet to establish any political connection," Grace Kaindi, the deputy police chief, told local media on 27 August.

On 22 August, David Kimaiyo, the inspector general of police, said: "The problem here is the leaders [politicians] and we are going to take drastic action. Some of them will have to go to court once evidence is gathered against them."

Ali Roba, the governor of Mandera County, told IRIN that one of the clans involved in the fighting had sought the support of Al Shabab elements.

"I have information that the Degodia sought the assistance of the Al Shabab elements and they [Al Shabab] were part of the gunmen who launched the attacks here," Roba, said.

Fatia Mahabub, the Mandera County women's representative, told IRIN: "It doesn't matter whether foreign fighters are involved or not as this is all about the fight for political dominance."

Mohamed said: "The settlement in Rhamu by the Garres who were uprooted from Wajir a few months ago has also angered the Degodia because of the feeling that this might further tilt the political balance in 2017 given that voting during elections here is done along clan lines."

Kenya's next elections for governors, senators, members of parliament and the president will be held in 2017.

"This is all about politics and those responsible must be held accountable," said KRCS'Gullet.