The latest conflict in South Sudan has undermined much of the progress that had been made in education there since a 2005 peace accord between Khartoum and southern rebels ended decades of civil war.

Children account for around half of the 1.5 million people displaced internally or across borders since fighting between rival army factions broke out in mid-December.

Many of the internally displaced are living in Protection of Civilian centres, sites designed to accommodate UN peacekeepers, where there is little space to set up temporary schools.

“The temporary camps where the displaced are living were never meant to hold so many people and this has meant that even setting up of temporary schools is a big challenge we continue to face. The conflict has made the education situation in South Sudan worse,” Doune Porter, Chief of Strategic Communications at UNICEF, told IRIN.

In areas worst-affected by conflict almost 100 schools have been destroyed or are occupied by government troops or armed opposition forces or displaced civilians.

“The violence has brought with it malnutrition, insecurity and diseases outbreaks like cholera, all of which affects education for many children here in South Sudan,” said Porter.

According to Save the Children’s Hollyn Hammond, the co-coordinator of the education cluster in South Sudan, “Many teachers in the three most affected states have not been paid since December 2013.

“We have heard that children and their families are fleeing to the borders to refugee camps to access education because it is not available in the affected areas. We know that people want these services. Children and adolescents residing in the IDP camps and UNMISS [peacekeeping] bases are idle and disengaged and this presents safety concerns for them and others,” she added.

Since mid-December, 110,463 children have received emergency education, against the cluster’s target of over 200,000. The cluster is one of the poorest funded in South Sudan. As of 31 May, it had received 32 percent of its requirements (compared to 53 percent for health and 74 percent for mine action).

“The current [funding] efforts are not adequate,” said Hammond, noting that this has a “dire effect on the organizations able to provide emergency education services.”

Betty Gorle, Emergency Response Advocacy and Communication Coordinator with Plan International, told IRIN that one of the main problems “for schools both in non-conflict locations and IDP centres is the problem of over-crowding. When we visited Gudele Primary in Juba in March there were close to 300 children in one classroom while some listened from outside.”

She added that lack of funding was a major issue. “Consequently, there are limited learning spaces and learning materials to cater for the high demand for education.”

In Unity, Upper Nile, Lakes, Jonglei and Central Equatoria states, the occupation of schools by armed groups had prevented an estimated 120,000 children from attending school, according to UNICEF.

“Children are willing to come to school but they can’t learn well every time the school gets flooded and they can’t sit down on the mud. Many children are showing signs of trauma,” Henry Anyuol Nyieth, a volunteer teacher in Juba, told IRIN.

Even before mid-December, South Sudan, because of the civil war with Khartoum, had some of the worst education indicators in the world, with around 1.3 million—approximately 50 percent—of primary school-age children not attending school. In 2012, the Overseas Development Institute reported that less than two percent of the country’s adult population had completed their primary education. 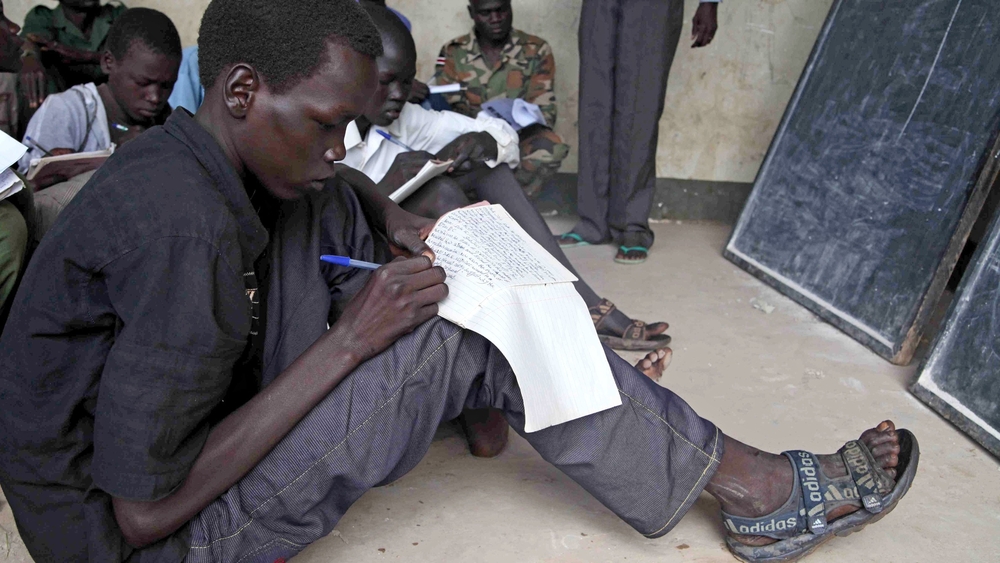 Yet significant gains were made after the 2005 peace deal, which led to the large-scale return of refugees. According a World Bank report also published in 2012, “about 700,000 more children enrolled in primary school between 2005 and 2009. A child in South Sudan now has a 60% chance of receiving some schooling, up from 40% a decade ago.”

In May, World Vision, concerned with the erosion of these achievements, said it was ”imperative that parties to the conflict immediately vacate schools for civilian use in accordance with international law.”

“It is also important for humanitarian organizations to scale up access to inclusive, safe and protective emergency learning spaces for children and youth affected by the conflict, as well as provide life-skills training and psychosocial support,” the agency said in a report entitled Sounding the Alarm.

An aid worker with an international NGO told IRIN anonymously that even in relatively safer areas, schools remained closed either because teachers were absent or parents remain reluctant to send their children back to school for fear of attacks.

“Some parents also say they fear rebels or government soldiers can still launch attacks even in schools as it happened in some health facilities. They are very fearful,” she said.

Still, aid agencies have continued to use volunteers to mobilize parents to allow their children to attend schools.

In Awerial County for instance, Save the Children has set up three temporary schools with 23 classrooms while supporting 20 more schools in Akobo, reaching over 4,000 children while Plan International has set up seven temporary learning spaces across the county. However, they remain overcrowded with classes holding up to four times more pupils than they were designed for.