While thousands of Central Africa Republic (CAR) refugees have settled in villages in neighbouring Cameroon after fleeing violence, many third-country nationals with whom they escaped are still stranded in border areas, surviving on occasional aid and frustrated by unfulfilled repatriation pledges.

Unlike refugees who are protected by international conventions, third-country nationals (TCNs), who neither belong to the country of refuge or the one they fled, are not covered by any global rights conventions. It is often up to their governments to look after them and arrange for their repatriation. However, 13,571 nationals of 12 African countries have been in limbo for months in eastern Cameroon.

“The main problem arising from such a situation is confusion about the two issues [refugees and TCN]. Often the TCNs consider themselves as refugees, yet they don’t benefit from the rights of the refugees,” said Roger Charles Evina, head of the International Organization for Migration (IOM) in Cameroon.

Many of the TCNs are living in rented houses in small towns just inside Cameroon, in villages or transit camps set up by IOM, which has helped repatriate some of the former migrants to their countries of origin. But financing such operations is costly. For instance, it cost IOM US$500,000 to repatriate around 700 Malians earlier this year. Many African governments are unable to finance and provide logistics for such mass transportation, Evina explained.

Eighty-five-year-old Aliou Djakité told IRIN they had been informed by the Malian consul in Cameroon, who has been paying their rent and handing out cash to a group of Malians in the eastern town of Kentzou, that the rent payments will stop by the end of May due to financial constrains that have also indefinitely put off their repatriation.

“We feel abandoned. The government is incapable of providing us with food or shelter. We don’t know where or who to turn to,” said Djakité who fled to Kentzou from CAR in February.

IOM, which has so far repatriated around 4,000 Chadians and Sudanese from Cameroon, is planning to repatriate another 5,000 Chadians over the next three months after it received $850,000 from the UN Office for the Coordination of Humanitarian Affairs’ Central Emergency Response Fund and the USA. The organization had halted its operations in April due to lack of funds. Chadians make up the bulk of TCNs in Cameroon.

Aid groups have been stretched by the influx of refugees and migrants from CAR since the escalation of violence late last year. Only 12 percent of funds have been received for the $274 million regional response plan by relief groups, said the UN Refugee Agency (UNHCR) which has made a fresh appeal for funding to help some 85,000 refugees who have arrived in eastern Cameroon since January. The agency has relocated more than 25,000 refugees from border areas to villages where they are settled in communal sites.

Cameroon currently hosts nearly 200,000 refugees from CAR and Nigeria, where Boko Haram insurgents are increasingly targeting civilians in their bloody raids which are ongoing despite military deployments in the country’s northeastern region.

Pledges, but no repatriation yet

In Kentzou, embassy delegations have visited their nationals, including Malians, Nigerians, Nigeriens and Senegalese, offering cash and other donations of basic necessities, but not flights back home. The majority of the TCNs had lived in CAR most of their lives. Some were born there to parents of other nationalities, or have mixed parentage, while others do not speak their own national or ethnic language.

As they fled attacks by armed gangs fighting a rebel coalition that toppled President François Bozizé in March 2013, families were separated, with members ending up in different transit camps along the CAR-Cameroon border. Others lost loved ones, and most lost their livelihoods, which they hope to restore once transferred to their countries of origin.

“We are just managing without much assistance. We borrow money or sell our phones to buy food,” said Lawan Bukar Soye, a Nigerian trader who left his Borno State home region for CAR in 1992. He said embassy officials had informed them that fighting Boko Haram currently remains Nigeria’s top priority and their relocation from Cameroon would have to wait. 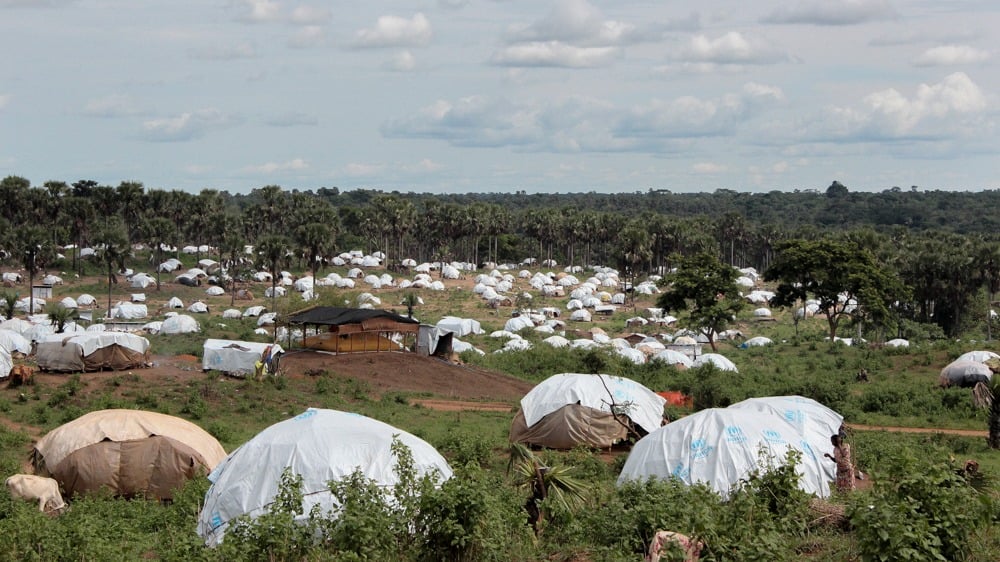 “We live by the grace of God,” said Aissatou Abdoullahi, who told IRIN that her husband was killed in the attacks and she has been separated from some of her family members who live at another transit camp in eastern Cameroon. “If we eat at lunchtime we skip dinner.”

“Survival here is difficult. If we eat once it’s OK, twice is good and three times is more than good,” said former diamond trader Abdoul Aziz Ly from Senegal, explaining that some of his countrymen and women have left for home on their own, and that he doubts Dakar’s promises of repatriation. Most TCNs currently in eastern Cameroon fled CAR at the beginning of this year as the conflict worsened.

States responsible for their citizens

IOM’s Evina said they are in talks with various African embassies to first relocate their nationals from far-flung areas to transit camps in Kentzou and Garoau-Boulai (another Cameroonian border town in the east). Settling in camps is important for recognition of the former migrants as TCNs. It also facilitates aid provision, said Evina.

“It’s very difficult especially for African embassies, both technically and financially, [to evacuate their nationals]. We approached European and other Western donors, but they all said that each country is responsible for its own citizens. The most urgent priority for IOM is to give the TCNs protection and basic necessities,” the IOM chief explained.

The conflict has also caused crisis for TCNs with family ties in CAR and other countries, and desperation for others who have lost IDs. Bintou Touré, who was born to Senegalese parents in CAR and married a Senegalese man with whom she later divorced, said she wanted to relocate to Senegal, where her ex-husband had returned with their seven children. She is now counting on the Senegalese embassy in Yaoundé where she registered for documentation for help.

Nigerian student Faisal Kadir said he has been struggling to obtain a declaration of loss for his documents from the CAR authorities since conflict drove him out of a southern CAR town where he was studying French in February.

“I am looking for a way to go back to Nigeria. This is my main problem,” said Kadir, recounting that his mother was killed in the attacks and that he has also lost contact with his family.