Become a member of The New Humanitarian.
DOYABA/SIDDHO/BELOM/N’DJAMENA

Abdou Abdoullahi stands beside the drenched makeshift shelter he built with his family in Doyaba camp in southern Chad: a few flimsy cotton shawls stretched over thin branches twisted into a cone-shape. Ten metres away lies a fetid rubbish dump and seven latrines reeking of human excrement.

“This isn’t the right way to live. This does not interest us,” he said, gesticulating to the dump and the toilets beside him.

Abdoullahi, a driver from the capital, Bangui, fled with his extended family of 25, after their houses, businesses, cars and shop were looted and destroyed. He is one among the 10,000 residents of 17,143-strong Doyaba camp who has received no shelter - aid agencies simply ran out, and no one has picked up the slack.

After the government of Chad transported tens of thousands of at-risk families of Chadian descent from the horrific violence in the Central African Republic (CAR), and provided food for some for the first couple of months, their aid fizzled out.

Charlotte Ouagadjo, head of the Ministry of Social Action in southern Chad’s Sarh town, a few kilometres from Doyaba camp, says they have zero resources other than some children’s clothes that they sporadically hand out.

Most of the inhabitants here are Muslim, are of Chadian descent though many were born in CAR, and most witnessed terrible atrocities before their escape with the help mainly of Chadian troops and Burundian peacekeepers.

“I was at home when the anti-balaka militia attacked my house. They grabbed my children and burned them - decapitated them - before my eyes.” The girls, Khadija and Zara, were aged two and eight. He set off on his moped to catch the men but was shot on the way and fell. He then fled to the local mosque with the rest of his family. “The next day they brought 120 corpses to the mosque - two of them were those of friends I had seen the day before. We were too frightened to leave the mosque.” His family stayed there three weeks until Burundian peacekeepers helped escort them to safety.

Hadjan Mohamed witnessed two of his daughters, Khadija 2, and Zara 8, decapitated and burned by the anti-Balaka in CAR. He says he cannot get the images out of his mind and needs help. He is currently at Doyaba camp in southern Chad near Sarh, with his fa 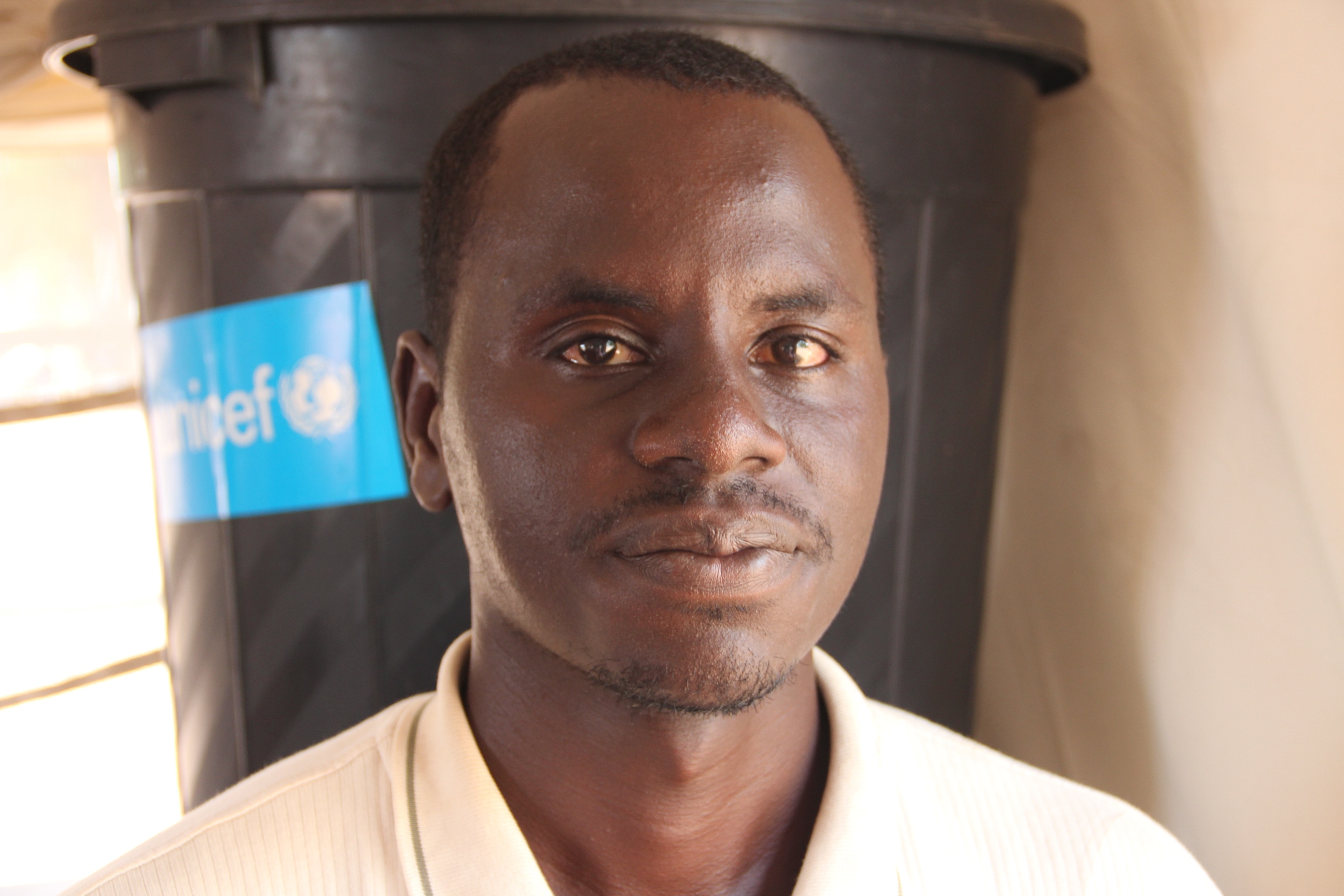 Many of these traumatized families welcome their relative safety but their lives are a daily struggle. Most are hungry - saying the 4,000 CFA per month (US$8) per person food coupons do not last beyond a couple of weeks; many came with no possessions and have not yet received cooking equipment or other basics; many have no change of clothing, no soap to wash with. Everyone IRIN spoke to told of having lost everything they owned: their houses, shops, animals, businesses - everything. Abdoullahi held up his driver’s license. “I used to work. This is what I know how to do, but it’s all gone,” he said. His son Ibrahim Oumar, 25, added: “We do nothing all day. I want to finish my studies, I want to work.”

The World Food Programme (WFP), which is running a cash voucher scheme , said it tallied the amount following a market analysis, and that it covers the grains, protein, fat and sugar required to make up a 2,100 kilocalorie daily intake. Some people may run out earlier because they are choosing to buy high-value items, speculated WFP head in N’djamena, Lauren Landis, “but the programme is popular: it gives people choice.” Some say not enough people are being targeted with food: 4,000 registered camp dwellers in Siddho site receive aid out of the 10,000 estimated refugees and returnees (others have spread across villages along the border).

Several women at Doyaba and the camp’s security chief, Saïd Seleh, said teenage girls and young women regularly left the camp at night for Sarh town to exchange sex for small sums so they can buy food. “It happens here in the camp too, they have no choice,” said camp-dweller Ashe Attou, who used to run a small shop in CAR earning the equivalent of US$20 a day.

WFP cannot scale up its operations in any direction, though would like to increase distributions from reaching 96,000 to reaching 150,000 people. “We have $3 million in the bank,” said Landis. “That money will last us until June. We need $11.4 million to keep this emergency programme going for the next six months.”

Global acute malnutrition levels in the camp were at the emergency 15 percent threshold level, when last assessed, with these levels higher in Bitoye camp on the border (24 percent) and in Doba (20 percent). In Doyaba, the International Rescue Committee runs a nutrition centre and holds health consultations, but is overwhelmed, with one doctor treating up to 250 patients a day.

The UN Children’s Fund (UNICEF) provides much of the nutritional supplement Plumpy’Nut but the pipeline has dried up, said UNICEF head in N’djamena Bruno Maes. UNICEF has just $2 million of the $14 million it needs to step up its response in water, sanitation and hygiene; nutrition and health services; and to support schools for the tens of thousands of out-of-school children.

Thus far UNICEF has set up hundreds of water points, showers and latrines in camps, and helped vaccinate 780,000 children against measles. Unless support is stepped up, “cholera is just waiting to happen,” said Maes. Some 33 of Doyaba’s 100-plus latrine tanks are already full; while in Siddho transit camp on the CAR border, all of the latrines overflowed in the first heavy rain.

To top it all, a countrywide measles outbreak has also hit the south: Doyaba camp has registered 15 cases thus far, and despite an extensive vaccination campaign targeting 700,000 people, one third of the children in Doyaba have not yet been vaccinated, estimates the UN Office for the Coordination of Humanitarian Affairs (OCHA).

Amid the squalid living conditions in the camps, not all feel safe. Women and girls in Doyaba complained of male youths hanging around the latrines at night preying on girls. Some take amphetamines and attack women at the stalls, said security chief Seleh. “They would bang down the door and we had no protection,” one woman told IRIN. “We have stopped the four biggest amphetamine dealers in the camp” - part of a crackdown effort - said Seleh.

Some 10,000 inhabitants of Doyaba transit camp in southern Chad, home to 17,143 people who fled the violence in CAR and were helped across the border by the Chadian military, have not yet received shelter. Aid agencies are severely under-funded and reside 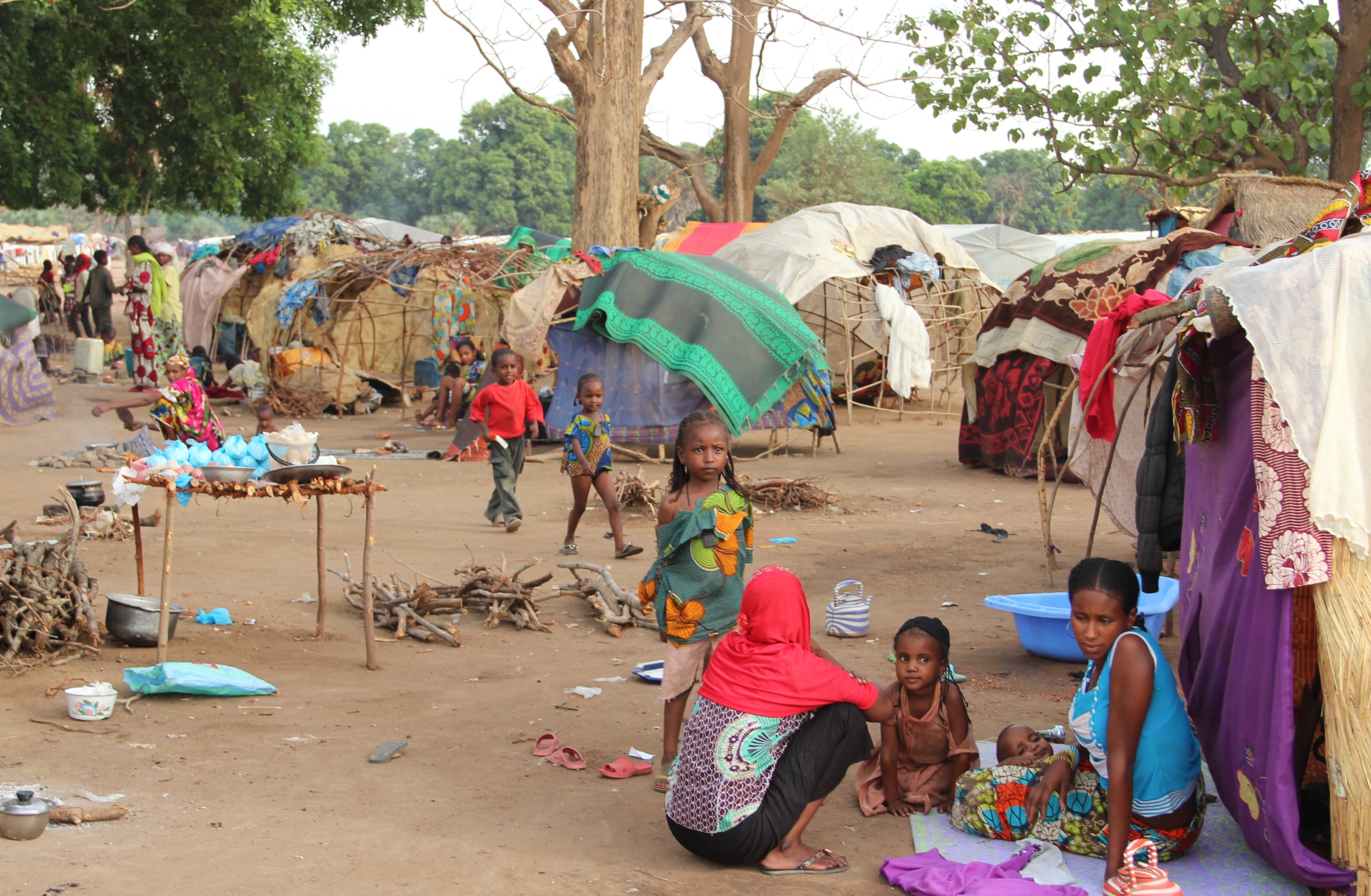 Unaccompanied minors are particularly vulnerable - some 106 remain in Doyaba, with 1,160 reunited thus far according to the Ministry of Social Affairs. Some witnessed both parents being killed, others were separated from their families in the chaos of their flight. In Doyaba, UNICEF, NGOs and the Ministry of Social Action are looking after them, with cooks and guardians for them at night, but those who remain separated are losing hope.

Isssaka Younoussa, 10, was separated from his parents and siblings at PK12, a Bangui neighbourhood, when the Chadian military escorted him out of the country. “I don’t have much hope left that I’ll find them,” he said.

Male youths IRIN spoke to denied that such things were happening in the camp. “There are many frustrated youths here. There is nothing to do. Back home we worked or studied, but here we just hang around,” said Souleman Adraman, aged 19. Mohamed Khalim, 31, and Abakar Mahamad, 29, brothers who witnessed the anti-balaka killing their parents and three brothers, said they were stranded. “We’re lost… We don’t talk about our loss as it is too painful... We just want things to do to take our minds off what has happened,” said Mohamed.

Football is a focus: In the late afternoon boys start impromptu football matches and even girls were seen playing their own separate game, and teachers from CAR have set up an informal school with 3,200 children registered thus far.

Some families who arrived with some savings are starting to make a small living. Khadija Brahim, 28, of Arab descent, who is here with her brothers and her children, makes millet porridge which she sells in sachets for the equivalent of 16-20 US cents, bringing her a profit of $4 per day.

Livelihood support activities will be available for refugees and some returnees over the long term, said UNHCR, but aside from the lack of money, one of the complications is that Doyaba and Siddho are just transit camps - residents will eventually be moved to a new camp near Maro town that UNHCR and NGOs are starting to set up following government approval.

UNHCR is struggling to keep up with the ever-increasing flow of returnees and refugees, said its programme manager in Maro, Jean Bosco. “Every few months our numbers triple - it makes it hard to plan.”

Last week the government launched an inter-ministerial emergency response for the refugee and returnee crisis, pinpointing three local NGOs to implement it and calling for US$53 million in support. Aid agencies say it is a good start and shows a concerted effort on the government’s part. The UN has also issued an appeal - for $124 million - which will support the government's plan. Thus far, donors have pledged to support just 25 percent of the government plan.