Read about what we achieved.
GOROKA

When Mary, aged 45, got sick, residents in her remote highland village in Papua New Guinea (PNG) did not take her to the doctor, but to a traditional healer believed to have magical powers.

“They said a witch had put a curse on me. They had to remove it. Had they not brought me to the nearest health clinic, however, I could have died,” she said. Her symptoms involved respiratory difficulties, in a country with a high incidence of TB.

Such stories are not uncommon in PNG, a largely traditional society with 836 languages and where belief in witchcraft or sanguma as it is known in Tok Pisin, the lingua franca, continues to undermine health care in the country.

“People routinely delay seeking proper medical care when they attribute their sickness or illness to witchcraft rather than natural causes,” said Sibauk Bieb, executive manager of public health within the Ministry of Health. “At that point, however, it can be too late.”

“Whether it’s diarrhoea, diabetes or heart attacks, people think witchcraft is involved and are not open to a medical explanation,” said Josephine Andreas, a registered nurse with 36 years of experience working in PNG’s Eastern Highlands Province. “This is the biggest problem and one deeply entrenched in people’s mind.”

“When people get sick they don’t think in terms of the medical cause, but rather who is to blame,” said Jack Urame, director of the Melanesian Institute (MI), an ecumenical cultural research centre in Goroka, Eastern Highlands Province.

For many, old age is the only “natural cause” of death, regardless of what a hospital autopsy might say, according to Richard Eves, a noted Australian anthropologist. All other deaths are invariably viewed with suspicion.

The problem is made worse by PNG’s deteriorating public healthcare system.

“The serious decline of health services in PNG has undoubtedly exacerbated the degree of recourse to sorcery and witchcraft as an explanation of illnesses and death,” Eves said.

Despite strong economic growth rates in recent years (and a projected 6.2 percent growth rate in 2014) fuelled by significant oil, gas, and gold reserves, the country’s public health system is dysfunctional at best.

According to the PNG Department of Health, less than half the population has access to health care; a problem pronounced in rural areas, where 87 percent of Papuans live. Here residents are largely dependent on more than 2,000 community health posts - the mainstay of PNG’s healthcare system - many of which have fallen into disrepair or closed due to lack of funding and corruption.

Jacinta Edson, 55, a pediatric nurse, outside the Asaro Health Centre in PNG's Eastern Highlands Province. In less than 10 years, 50 percent of the work force in the health sector will either have retired or moved elsewhere 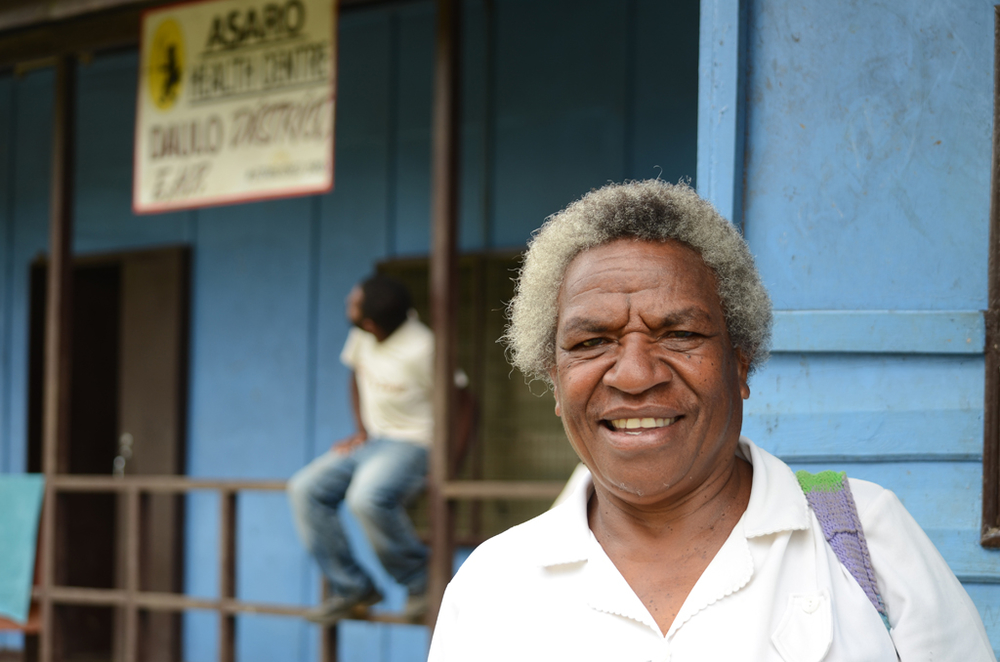 In the Highlands province of Ora, nearly 40 percent of all health posts are shuttered, the authorities confirm, due to shortages in funding, and insufficient staff, especially midwives and doctors.

At the same time, a fragmentation in institutional relationships (for example, when some health workers at the village post level do not recognize or fail to refer patients to hospitals or district clinics), compounded by an unclear allocation of responsibilities for service delivery, has exacerbated healthcare woes.

All this in a country where babies, children and mothers continue to die in large numbers from preventable causes. At 230 per 100,000 live births, PNG has one of the highest maternal mortality ratios in Oceania region (a collective name for the 25 islands in the tropical Pacific Ocean) and more than 3,000 percent more than neighbouring Australia, while poor drug distribution and PNG’s largely rural and remote population find it difficult and expensive to access basic medical services.

Fuelling the problem further is the inability of health staff to effectively convey health messages and treatment decisions to patients and their families in a way they can readily understand, a fact which can further strengthen people’s belief in a universe of magic.

Doctors and nurses unable to properly diagnose a specific illness will routinely suggest to patients and their families that their sickness might be sik bilong ples (sickness from the village), which serves as a code word for illnesses of magical origin stemming from social disharmony in the village, suggesting that someone with a grudge had caused the sickness by sorcery or witchcraft.

People distinguish between this and sik nating (ordinary sickness), which can be cured by modern medicine, according to MI.

“When delivering health messages, people need to recognize that such beliefs [witchcraft and sorcery] exist and do impact people’s understanding of health,” Lillian Siwi, head of health in Eastern Highlands Province, said.