“Learning from the bitter experience of Cyclone Nargis, the government and the communities have become [better] prepared for a disaster, especially a cyclone for which extreme weather forecasts or early warning can be provided,” Toily Kurbanov, country director of UN Development Programme (UNDP), told IRIN.

According to the government, more than 2 million people were affected by the category-4 storm (category 5 is the worst), which swept across Myanmar’s low-lying Ayeyarwady Delta and parts of Yangon Division on 2 and 3 May 2008, killing close to 140,000 and destroying or damaging more than 700,000 homes.

Myanmar’s meteorology department started to send out warnings six days before the storm struck, based on information from the World Meteorological Organization. However, many residents were taken completely by surprise as authorities lacked radar to predict the high tidal waves that resulted in most of the fatalities.

Experts and authorities cite improved weather forecasting and message dissemination as the primary factors behind the progress.

“Everything in that process has been improved,” Than Than Myint, a project associate for the Asian Disaster Preparedness Centre (ADPC), agreed. “Improvement has been made in the forecasting, detection, and community preparedness, as well as early warning message generation and dissemination,” she explained, a sentiment echoed by residents on the ground.

“We never guessed that the storm would affect us like that or how powerful it could be,” Yee Pyone, 45, in the coastal village of Thagyar Hin Oh, home to some 650 residents in Dadaye Township, one of the worst affected areas by Nargis. “Now we feel better prepared.”

Although villagers in places like Thagyar Hin Oh had been warned of the storm one day earlier, many had failed to act as they did not understand its strength or lacked confidence in the reliability of the warning. When the storm struck, it was too late and 58 residents lost their lives.

“We didn’t trust the weather forecast. It had been wrong before,” Kyaw Sann, another cyclone survivor recalled. “We failed to prepare, which cost us some very painful lessons.”

Today, the government has been working to improve its early warning capacity through the country’s Department of Meteorology and Hydrology (DMH), whose primary responsibility is to provide early warning to the higher authorities, local government, and disaster risk reduction agencies, media, international NGOs, Myanmar NGOs and the general public.

Earlier this year, Myanmar received US$40 million from Japan to establish three weather radar stations in Yangon, Mandalay and Kyaukpyu (a major town in Rakhine State, in western Myanmar) as well as 30 automatic weather observation stations across the country by 2017.

"There have been improvements at the DMH since Cyclone Nargis. It’ll  be much better when we have three radar stations  operational,” Tun Lwin,  former director of the Department of Meteorology and Hydrology (DMH), said, citing a much more proactive approach by the government.

When Nargis struck there was only one radar station in the country which had not been operational since 1997.

"A change of government helped DMH to make improvements. In my time, there were barriers. I had submitted several proposals to upgrade equipment of DMH. But the then government didn't consider them seriously.”

Although Myanmar had an early warning system in place at the time of Nargis, it did not work properly and was slow in disseminating information that the military government might deem sensitive or result in panic, he explained.

A fisherman works the rivers in Myanmar's Ayeyarwady. The area was badly impacted by Cyclone Nargis in May 2008, which let close to 140,000 people dead 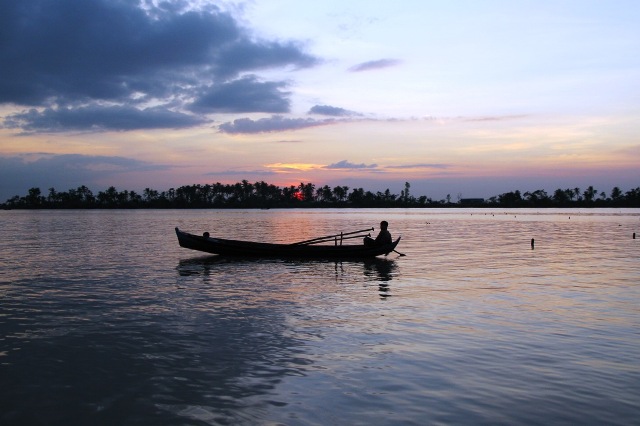 Today’s early warning system now links the DMH with each region, state, township, and district level via phone or fax (In 2012, only 3 percent of the population had a mobile phone), while from the township to village tract level, storm warnings are passed on either by phone or an officer dispatched to the area, with the village authorities making announcements on public loudspeakers.

“It’s hard to tell with 100 percent certainty, but one thing is certain that we should not expect the same level of fatalities seen after Cyclone Nargis,” Peeranan Towashiraporn, director of the ADPC, said.

At the same time, weather warnings are now being more actively broadcast through radio or TV - something that is already paying dividends.

When Cyclone Giri, another category-4 storm, struck Myanmar’s western Rakhine State in October 2010, triggering storms, heavy rains and huge tidal surges in coastal areas, the death toll (45) was only a fraction of that experienced during Nargis, partly the result of better early warning, including dissemination by the media, along with prompt actions by authorities and the Red Cross in moving people away from high risk areas, aid agencies say.

According to the UN, when Giri struck, communities were more resilient, and authorities had partnerships in place which allowed them to respond more effectively. In 2013, the Burmese government’s overall preparedness for Tropical Storm Mahasen was also positive.