While the death of a mother during childbirth has obvious emotional and personal implications, a new study in Kenya that quantifies the precise economic burden on households has found that it can be debilitating for a family and push them into poverty.

The report, entitled A Price Too High to Pay and released in March found that families were paying upwards of an entire year of their household income to cover the medical and funeral costs of such a death.

“A mother’s death begins a chain of disruption, economic loss, and pain that, far too often, leads to the death of her baby, loss of educational and life opportunities for her surviving children, and a deepening cycle of poverty for her family,” warned James Macharia, Kenya’s cabinet secretary for health.

Findings of the report

The report looked at almost every case of maternal mortality in parts of Siaya region in Western Kenya over a period of 22 months, and interviewed 59 households who had experienced a maternal death (death of a mother). Interviewers also spoke to households who had delivered a healthy child about the cost of their pregnancy care.

The data revealed that, on average, the total cost during a normal pregnancy was 934 Ksh (US$11), while for cases of maternal mortality, the hospital bill averaged 7,322 Ksh ($85). Further, “across all wealth levels, families’ funeral costs exceeded their total annual expenditure on food, housing, and all other household consumption.”

A lot of the women who died were economically contributing to their families, and their loss - and the gain of a child - meant that households were further driven into poverty. The study found that many of the women had worked on their own or on family farms, or were running their own market stalls, shops, or other small businesses.

“Over more than a decade of surveying the population in this part of the county, we have seen, over and over again, the devastating consequences of maternal death for children and families,” said John Vulule, director of the joint US Centers of Disease Control and Kenya Medical Research Institute (KEMRI/CDC) Research and Public Health Collaboration.

The study was conducted from 2011 to 2013 by KEMRI/CDC, FCI and the International Centre for Research on Women (ICRW).

In Kenya, there are 360 maternal deaths per 100,000 live births, according to government figures. The country’s MMR has come down by 0.5 percent each year over the last 20 years, not enough to meet the MDG targets to reduce the ratio by three quarters. Less than nine months remain before the MDGs expire.

“We are still very far from achieving the maternal the goal,” Simon Mueke, head of reproductive and maternal health services at the Ministry of Health, told IRIN by phone. “Some of the factors are beyond the Ministry’s reach, for instance rampant poverty levels and cultural issues.”

MMR in developing regions, according to the UN, is still 15 times higher than in the developed regions.

Most maternal deaths are due to causes directly related to pregnancy and childbirth, unsafe abortion and obstetric complications such as severe bleeding, infection, hypertensive disorders, and obstructed labour.

“Many of our health facilities don’t have simple resuscitating equipment for pregnant women. Sometimes women brought here don’t get needed assistance,” Shikanga O-tipo, head of the integrated disease surveillance department in the Ministry of Public Health and Sanitation, told IRIN.

“In such scenarios health workers have little to do, but sometimes to hold back their hands and wait for the patients to die,” added O-tipo.

Although the government introduced free maternal care last year, it has been unable to cope with the increased demand for hospital deliveries.

“The government failed to address personnel deficit. In a major hospital, like Nyanza Provincial Hospital in Kisumu where deliveries were between 15 and 20 patients per day, sometimes only two nurses are attending to the mothers,” said O-tipo.

Before free maternal health care, only 35-40 percent of pregnant women had their babies at these facilities.

The study data shows that of the 59 cases of maternal death cited, even though 31 infants survived delivery, 8 died during their first week and another 8 died within the next few weeks. Therefore, a total of only 15 babies survived from the 59 pregnancies.

“The research, which is critically important, shows yet again that the costs of maternal death are indeed far too high for the Kenyan people to bear,” the Health Ministry’s Mueke noted.

In Kenya, health officials and the government are at odds over who is responsible for the high MMR.

“There is total confusion in the government [over] who ought to recruit more staff,” said Mueke.

A nurse listens to the heartbeat of a foetus of a pregnant woman at a local dispensary in the village of Emukhangu in Lurambi division, of Kakamega district in western province. Malaria is the number one killer this area. 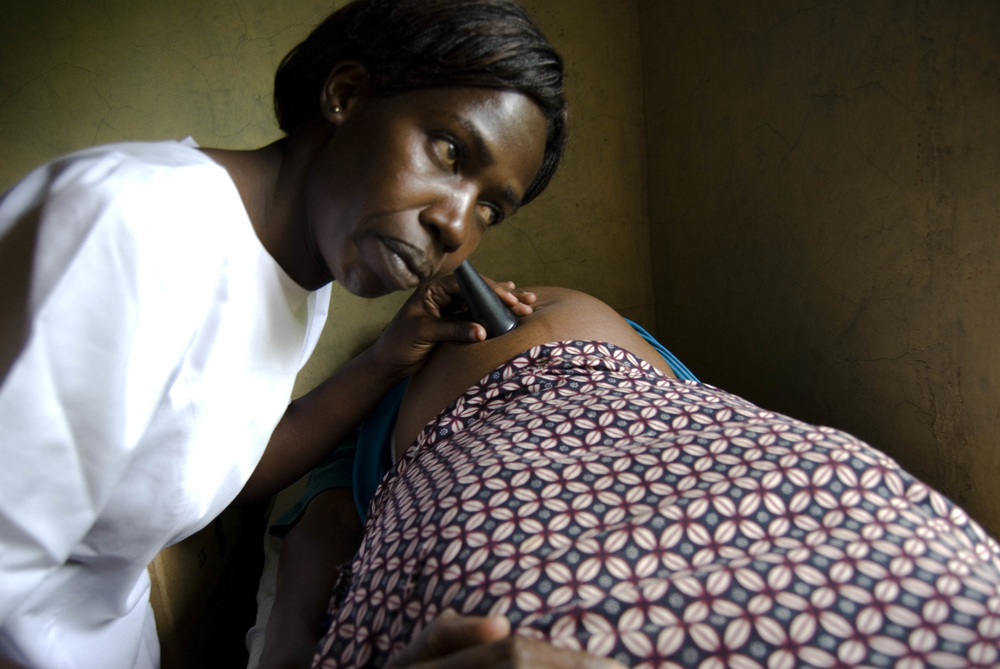 O-tipo said that for Kenya to prevent maternal mortality, the government needs to put more resources into the sector, and urge pregnant women to attend maternal clinics and buy enough drugs.

“There is need for enough staff and functional facilities with functional theatre services. On top of these, we need a functional non-pharmaceutical and pharmaceutical supplies like simple drugs to stop bleeding,” he added.

“Across Kenya, in every county, we must commit ourselves to ensuring that every woman has access to high-quality antenatal, maternity, and postnatal care, and that the families who suffer these devastating losses receive the support services they desperately need,” said Mueke.