They went in a bid to escape poverty, but few really succeeded, even if they did find work. Many were abused by their employers. Now, 144,000 Ethiopians have returned home, deported from Saudi Arabia, which began a crackdown on undocumented foreign workers in November 2012.

The authorities in Ethiopia were expecting migrants to return, but, anticipating a mere 30,000, they set aside just US$2.6 million to help with reintegration.

“The assistance they are receiving now is short-term, but once they get back to their homes, they will need long-term assistance, like finding jobs and reintegrating into the community, and the government must work towards these goals,” Sharon Dimanche, from the International Organization for Migration (IOM), told IRIN.

The government has also banned its citizens from travelling to the Middle East, a move migration expert say will not only lead people to head for new destinations, such as Sudan, but could flout international laws on freedom of movement.

According to Chris Horwood, of the Regional Mixed Migration Secretariat (RMMS), the main drivers of migration from Ethiopia are “endemic poverty caused by economic inequality, poor education and training options.”

He added, “We also know about pressures on access to natural resources and the impact of climate change making some areas very fragile. So people migrate as a coping strategy to poverty and lack of opportunity, and some migrants from Ethiopia particularly identify political oppression (particularly the Oromo).”

In 2010, Ethiopia came up with its Growth and Transformation Plan, a five-year blueprint for economic growth. “Four million jobs have been created in the first three years… We hope, if this trend continues, we will have a substantially reduced number of migrants going out of the country very soon,” Abdulfetah Abdulahi, Minister of Labour and Social Affairs, told IRIN.

Yitna Getachew, of IOM, agreed that such initiatives could help stem migration, but said that the effects were unlikely to be immediate.

“It takes time before people can begin to feel comfortable with economic prospects at home. The early stages of economic growth - the World Bank estimates that it will exceed 7 percent in Ethiopia between 2013 and 2015, while in 2012, its economy was the 12th fastest growing economy globally - currently being experienced in Ethiopia are likely to increase cases of migration,” said Getachew. “People who hitherto had no money [are] begin[ning] to get [an] income, which they can invest in migration by… bribing smugglers, migration officials and buying fake documents.”

IRIN met some of the deported migrants, who spoke of the reasons they left home, of what life was like in Saudi Arabia, and of their hopes and their fears now that they have had to return to Ethiopia.

Mekuria’s parents sold the only cows they owned to raise the 8,000 birr [$417] smugglers charged for her passage to Saudi Arabia. The journey by sea took her to Yemen. From there, she travelled by truck to the Saudi Arabian city of Jiza, where she found a job as a maid.

“It takes time before people can begin to feel comfortable with economic prospects at home. The early stages of economic growth currently being experienced in Ethiopia are likely to increase cases of migration”

Through her salary of 2,000 Saudi Riyal [$530] a month, she was able to support her parents back home in Dessie town, in the Amhara Regional State in northern Ethiopia. Still, she had no savings by the time she was arrested by Saudi authorities and sent home in late December 2013.

“My main aim was to go there and earn more money, since I have seen a number of people from our locality that traveled there and changed their lives. My status was actually illegal since I [did not] have proper documents to live and work there,” Sophia told IRIN.

Her parents used the money she sent home “mainly to buy food,” she said.

She told IRIN she would not consider returning to Saudi Arabia.

“I will work here in my country because I have seen enough suffering in the past month alone. They kept us in camps in an inhumane way until our arrival here.”

Mursan Ali, a 36-year-old father of two, travelled to Saudi Arabia two years ago. His journey involved walking to the coast of Djibouti, on the Gulf of Aden, surviving only on the food he carried and a bottle of water, and sleeping unprotected on the ground at night for five days. From there, his smugglers put him on the boat to Yemen.

But the boat was wrecked off the coast of Yemen; Ali was among 35 people rescued. He and the other migrants were taken to a Yemeni prison, where they spent six months before being transferred to a camp to await deportation.

“A number of us managed to escape out of it [the camp] and joined the workforce,” Ali told IRIN.

After his escape, he trekked overland to Saudi Arabia.

“I was working as a metal worker and was earning [about] 1,500 Saudi riyals [$400] at the time. I cannot make that much money here in Ethiopia.”

An informal settlement in the ethiopian capital Addis Ababa 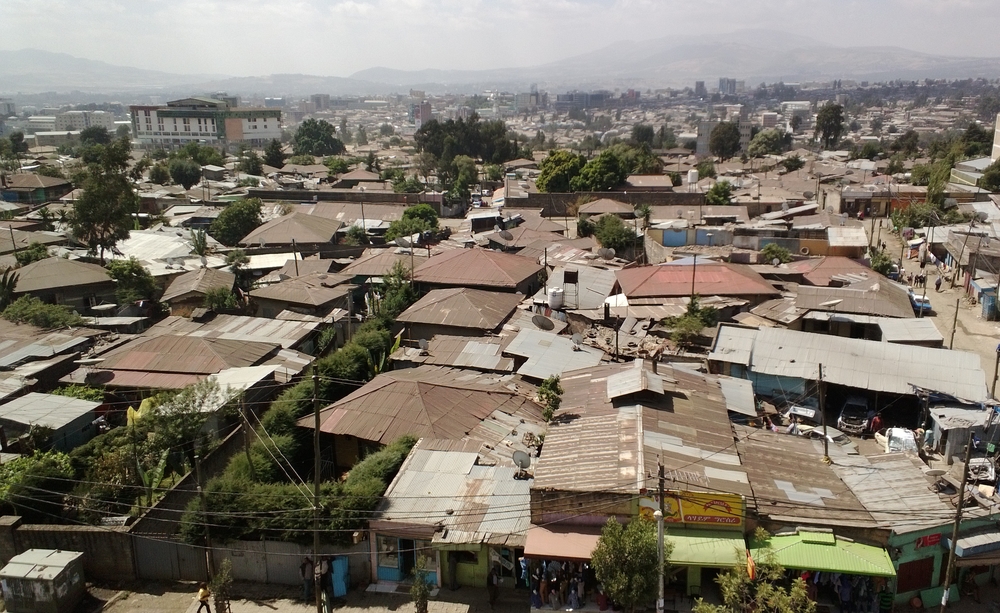 To pay his smugglers, he had saved 4,000 birr [$209] out of the 50 birr daily wage he earned as a construction worker in the capital, Addis Ababa.

“My family is poor, and all I have known is poverty. I wanted to earn enough money to help my family, and people told me about jobs in Saudi Arabia which were paying [better] than what I earned as manual laborer in Ethiopia,” he told IRIN.

He hopes that the Ethiopian government’s promise to create more jobs can help halt irregular migration to the Middle East.

Tassew lives with his sister, Negash, a 35-year-old cleaner and mother of one, and another sibling, Mesfin, in a tiny tin-walled shack in Addis Ababa.

Tassew and Mesfin were among those deported from Saudi Arabia. Negash now supports both of them.

“They could support me when they were there,” Negash told IRIN, “but now, I will use my small salary to support the four of us. It is hard because they came with nothing, and they will take a long time to get jobs here. They will burden me, but I can’t send them away.”

She added, “I saved a little of what they sent me to start a business, but now I can’t [save money] because I will use it to provide for them and myself.”

Tassew does not rule out looking for opportunities outside again. “If it is hard to go to Saudi Arabia, I will look out for other countries where I can find work. I can go to Sudan or somewhere, because here, it is hard to be employed,” he said.

According to the International Fund for Agricultural Development (IFAD), Ethiopia “remains one of the world's poorest countries. About 29 per cent of the population lives below the national poverty line”.

Fatima,* 23, stayed in Saudi Arabia for just six months before she was deported.

She told IRIN, “I haven’t finished paying my smugglers, and now they will want their money. I still owe them 5,000 birr [$260], and they will now auction my parents’ property” through their agents in Addis Ababa, where her parents live.

“I was to pay them when I arrived and found a job in Saudi Arabia. I was deported before I could get enough money,” she said.