Cattle bred for meat and dairy in some poor countries can emit 100 times more earth-warming carbon dioxide than those in rich countries for each kilogramme of protein (milk, meat) produced, says a new study.

The study, published today in the Proceedings of the National Academy of Sciences (PNAS), is the newest comprehensive assessment of what cows, sheep, pigs, poultry and other farm animals are eating in different parts of the world; how efficiently they convert that feed into milk, eggs and meat; and the amount of greenhouse gases they produce.

Globally, the scientists found that cattle, bred both for beef or dairy, are the biggest source of greenhouse emissions from livestock, accounting for 77 percent of the total. Pork and poultry account for only 10 percent of emissions.

Sub-Saharan Africa is identified as a global hotspot in terms of emissions. Cattle grazing in the arid lands of Ethiopia, Somalia and Sudan, for example, can release the equivalent of 1,000kg of carbon dioxide for every 1kg of protein they produce, said a fact sheet provided by the research institutions. By comparison, in many parts of the US and Europe, the emission intensity is around 10kg for every 1kg of protein.

This new data offers a more detailed way to help countries establish their emission baselines as related to the livestock sector, compared to other studies and data generated in the past.

"Cattle grazing in the arid lands of Ethiopia, Somalia and Sudan, for example, can release the equivalent of 1,000kg of carbon dioxide for every 1kg of protein they produce"

Among the major warming gases, methane (44 percent) accounts for most of the livestock emissions, a report by the Food and Agriculture Organisation (FAO), said earlier this year.

This is followed by nitrous oxide (29 percent) and carbon dioxide (27 percent).

Better diets, feeds and feeding techniques can reduce the methane released during digestion, as well as the amount of methane and nitrous oxide released by decomposing manure, say scientists. The nutrient balance in the feed can affect the amount of gases an animal produces. Rich countries provide feeds that are more balanced in their nutrient mix. Scientists areworking with different types of grasses to help poor countries reduce their livestock-sector emissions.

More information on how the livestock sector affects us is critical, as demand for livestock products is expected to increase by 70 percent by 2050.

The new study found that grass accounts for most of the feed consumed by livestock in developing countries (73 percent) - with cattle chewing up by far the most.

Mario Herrero, lead author of the study, who earlier this year left ILRI to take up the position of chief research scientist at CSIRO in Australia, told IRIN that livestock in the developing world emit more methane because “there are more animals in the developing world,” and “what they eat is of lower quality, and hence it releases more methane per unit of feed consumed.”

A cow in North America or Europe likely consumes at most about 75-300kg of dry matter to produce 1kg of meat protein, while in sub-Saharan Africa, a cow might require between 500-2,000kg of dry matter to produce 1kg of meat, said the fact sheet. "The differences in feed efficiency are mainly due to the higher nutritional and digestive quality of pastures in more temperate regions such as North America and Europe," it said. However, feed efficiency is calculated based on the output of an entire herd, and in Africa, relatively high livestock mortality rates and low reproduction rates also contribute significantly to the overall inefficiency of their livestock systems, added the fact sheet.

Herrero admits that for the small farmers in the developing world, it is easier to let their animals graze on grass as few are able to afford quality feed.

“What we need is to intensify smallholder systems in a sustainable manner,” said Herrero in an email. “This not only means improving feeding of animals, but also to develop markets so that farmers can sell their products, create policies and regulations so that farmers in formal and informal markets can also sell quality products and adhere to health regulations and so on.

“For this we need the right types of investments for markets to develop and for creating incentives for farmers to intensify their systems and produce more milk, meat and crops.”

There are also examples of how efficient small-scale livestock farmers can be. Jimmy Smith, director general of ILRI, recently provided examples of how competitive these farmers are in the developing world.

"In East Africa, one million smallholders keep Africa’s largest dairy herd, Ugandans produce milk at the lowest cost in the world, and Kenya’s small- and large-scale poultry and dairy producers have the same levels of efficiency and profits," says the ILRI website. Small-scale farmers in India account for at least 70 percent of the milk produced nationally.

The need for the data

Herrero explained that the idea behind the study was to produce a data on the interaction between livestock, consumption of biomass such as grass, land and feed, and the impact it has productivity, emissions of gas and manure.

Luisa Antonio was among 5,000 people in Mozambique’s northwestern Tete Province resettled by Brazilian mining company, Vale. The company has paid for the start-up costs of a poultry breeding business, but she will have to repay the money 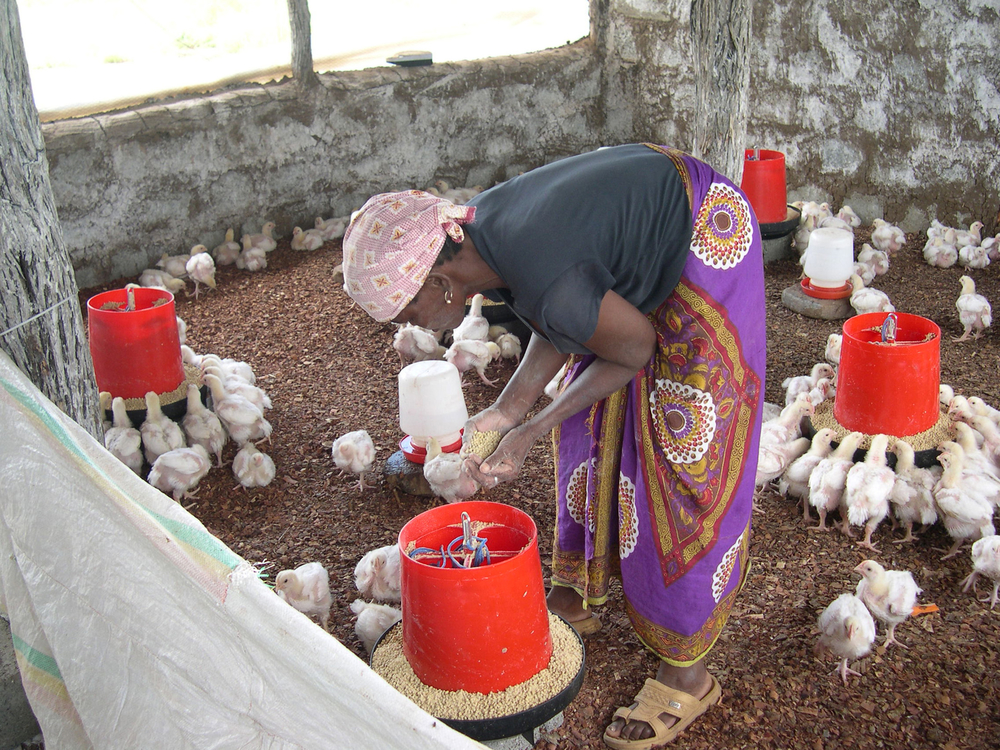 He added the new data could be used to study other dimensions of livestock systems - such as incomes, vulnerability, social conditions and adaptation to climate change.

The data, which reveals the different ways people around the world raise animals, could help inform the “debate over the role of livestock in our diets and our environments and the search for solutions to the challenges they present,” he said.

While the new data will help to assess the sustainability of different livestock production systems, the authors caution against using any single measurement as an absolute indicator of sustainability, said the fact sheet. For example, the low livestock feed efficiencies and high greenhouse gas emission intensities in sub-Saharan Africa are determined largely by the fact that most animals in this region continue to subsist primarily on vegetation inedible by humans, especially by grazing on marginal lands unfit for crop production and on other residues of plants left on croplands after harvesting.

“While our measurements may make a certain type of livestock production appear inefficient, that production system may be the most environmentally sustainable, as well as the most equitable, way of using that particular land,” said Philip Thornton, another co-author and an ILRI researcher, in a press release on the study.

Pork and poultry versus cattle and sheep

Policymakers can make informed choices based on the detailed data generated by the report. For instance, the study confirmed that pigs and poultry are more efficient at converting feed into protein than cattle, sheep and goats.

“The large differences in efficiencies in the production of different livestock foods warrant considerable attention,” the authors note. “Knowing these differences can help us define sustainable and culturally appropriate levels of consumption of milk, meat and eggs.”

However, the authors caution that the lower emission intensities in the pig and poultry sectors are driven largely by industrial systems, “which provide high-quality, balanced concentrate diets for animals of high genetic potential.” These systems also pose significant public health risks with the possibility of transmitting of zoonotic diseases.