While security in some northern Mali towns has improved, continued sporadic attacks by militant groups in Timbuktu and Gao, as well as fighting between separatist Tuareg groups and Malian forces in Kidal, are still hampering some aid operations and keeping refugees from returning home.

The most recent attacks took place on 21 November, when three rockets were fired by militants towards Gao town from 10km away, and on 20 November in Kidal, when a landmine injured three French soldiers just outside Kidal town.

In Kidal, insecurity is worst in the northern Ifoghas Mountain region and around the town of Tessalit; in Gao Region, it is worst in the Menaka and Ansongo towns, close to the Niger border, according to UN peacekeeping mission in Mali (MINUSMA) Deputy Special Representative David Gressly.

Insecurity in these areas has hampered aid deliveries, said Fernando Arroyo, head of the UN Office for the Coordination of Humanitarian Affairs (OCHA) in Mali, which has offices in Gao and Timbuktu but not in Kidal. "Very few agencies have access to northern Kidal at the moment," Arroyo said.

Humanitarian needs assessments have also been limited in Kidal, said aid agency staff, noting that UNICEF's May nutrition assessment, for instance, covered Gao but not Timbuktu or Kidal due to insecurity. Insecurity is also slowing down operations, as UN agencies wait for MINUSMA troops to secure or patrol areas before going in.

But some agencies say they are continuing to work throughout the north's danger zones - unimpeded. Attaher Maiga, with the International Committee of the Red Cross (ICRC) in Gao, said the ICRC continues to access all 11 of the region's "cercles", or districts. "There are no areas where we can't go," he told IRIN.

ICRC works in the hospital in Kidal town and in health clinics around the region, among other activities.

Yssoufou Salah, Médecins sans Frontières (MSF) head of mission in northern Mali, said, "So far there have been no areas we haven't been able to go."

MSF works mainly in Timbuktu's regional hospital and recently opened a clinic close to the Mauritania border, though it also travels all over Timbuktu, as well as Gao, where it works in Goundam. "Our biggest worry is homemade bombs on the road. We have to be very careful and always consult with the Malians and MINUSMA before we go on a mission," he told IRIN.

The last attack in Timbuktu took place in September, when four suicide bombers, driving a truck loaded with explosives, blew themselves up outside a Malian military camp, killing two civilians and six soldiers.

Moulaye Sangaré, a doctor at the regional hospital in Gao town, said he worries that some vulnerable populations in rural areas are not being reached because many families are too fearful to leave their homes. "I'm afraid there are more malnourished children that are not being treated simply because their mothers can't bring them here to the hospital," he said.

Some locals have expressed anger that more is not being done to secure rural areas and villages, where they say members and former members of militant groups continue to lurk.

"We know that these people are out there. To feel safe we need the army to control who moves in and out of town," said Ousmane Maiga, member of a youth coalition in Gao. "The government has already agreed to negotiate with the rebels. The problem is they don't know who is MNLA [National Movement for the Liberation of Azawad], MUJAO [Movement for Oneness and Jihad in West Africa] or AQIM [Al-Qaeda in the Islamic Maghreb]. We do. When the negotiations start we would like to participate," he said.

Residents of Gao town have become used to constant attacks, resident and radio journalist Amy Idrissa told IRIN. "The rebels have left Gao and are hiding in the bush not far from here, maybe only in the next village or across the river. They've been trying to get back into town since it was liberated," she said.

Gao-based bus driver Soumeila Koné said he is nervous working in the area, but he has little choice. "The north is a violent no man's land where bandits and armed groups roam," he said.

In Kidal, the security improvement expected to follow a June 2013 accord signed by the Malian government, the MNLA and the Arab Movement of Azawad (MAA) has not materialized.

Amid the continued attacks, there has been confusion over who is in charge; French troops, MINUSMA forces and Tuareg rebels all control different parts of Gao town. But according to Kidal mayor Arbacane Ag Abzayack, "There's no doubt it's the Tuareg rebels who control Kidal."

French troops with Operation Serval in Kidal focus on anti-jihadist operations, while MINUSMA and Malian troops are tasked with securing the town. Despite these efforts, two-thirds of adult residents carry a gun for protection, Ag Abzayack told IRIN from Bamako, where he was travelling. "Because there is no government, everyone does as they please."

Malian soldiers were only allowed back into Kidal in July, because of fears of clashes between them and Tuareg rebel groups. Since then, they "haven't left camp a lot" said the mayor.

Earlier this month, the MNLA, MAA and the High Council for the Unity of Azawad (HCUA) joined to form a united front in peace talks with the Bamako authorities, which are scheduled to start this month.

In early November, when the MNLA/MAA/HCUA coalition handed over the keys to administrative buildings to MINUSMA in preparation for the Malian government to take them over, women and youths gathered in front of the governor's office, launching a protest in support of the rebels.

"So far no government officials have returned, and no one knows who's in charge," he said.

While troops with France's Operation Serval, the Malian army and MINUSMA are all present in the north, there are not enough troops to secure the vast area, said experts.

A French soldier passes out safety material on mines in the damaged market area of downtown Gao, after fighting between radical Islamist rebels and French and Malian forces left it in ruins in Gao, Mali, 2 March 2013. 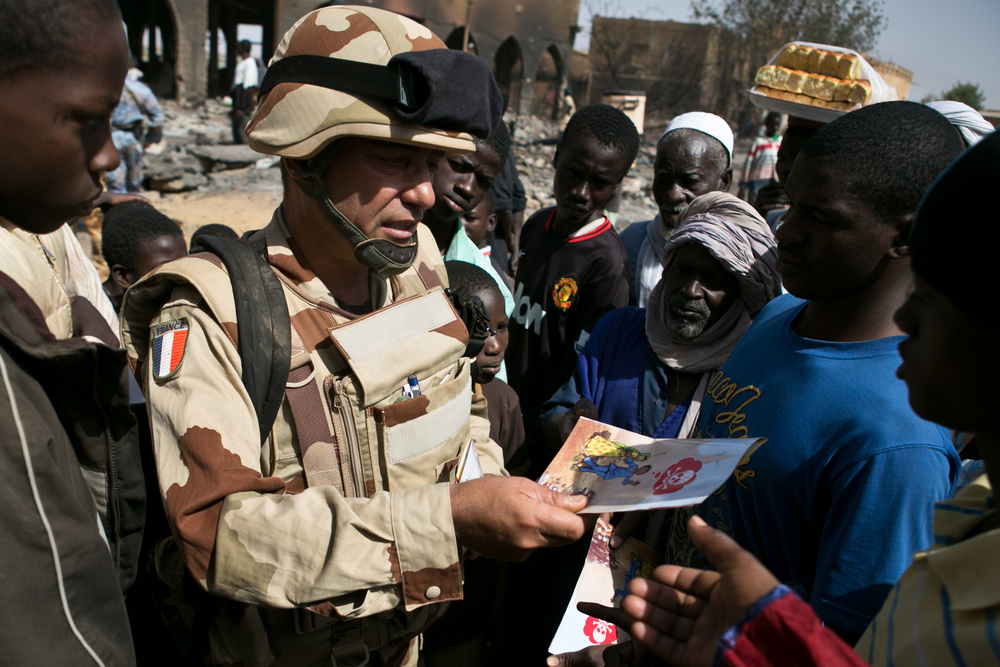 Some 1,800 of the remaining 2,000 French troops in Mali are deployed to the north - most of them to Gao, and the rest to Timbuktu, Kidal town and Tessalit.

Following the murder of two French radio journalists in early November - which AQIM has claimed responsibility for - France reinforced its troop presence in Kidal to 350, according to its spokesperson, Hubert de Quievrecourt. But it is still scheduled to follow through with a drawdown to 1,000 troops following the legislative elections.

This process was supposed to coincide with the build-up of the MINUSMA force to 12,600 troops - but thus far only 5,162 MINUSMA personnel are in Mali.

Multiple reasons for the poor showing, include a drawdown of forces by Nigeria as it faces its own security crisis, and a reduced commitment by Chad following heavy troops casualties in combat in the north and mounting violence in Chad's neighbour, the Central African Republic.

Some 2,675 MINUSMA troops are in Gao, Tessalit, Aguelhok, Kidal, Ménaka and Ansongo; 1,823 are stationed to secure Timbuktu, Gossi, Douentza, Sévaré, Goundam and Diabaly; and 664 are serving as military and police in Kidal.

More military and police are expected to arrive soon from Bangladesh, Burkina Faso, Cambodia, China, the Netherlands and Rwanda, according to Quievrecourt.

Amid this inadequate capacity, the Malian army is gradually building up its presence, while European Union trainers try to get troops fit for purpose. Thus far, it has boosted checkpoints and patrols outside of Timbuktu and Gao towns and increased its presence towards the Mauritania border and in Gourma-Rharous on the Niger border, where rebels kept a presence several months after the north was liberated, said its head in the north, Maj-Col Abdoulaye Coulibaly.

The army continues to struggle in its fight against sleeper cells in towns and rural areas, said Coulibaly. The Timbuktu bombings and Gao rocket attacks, in his view, "had help from people inside and around Gao. They are the husbands, sons and brothers of Gao and Timbuktu citizens, and that's why we are asking the population to help us in chasing down these criminals."

He added: "My main concern is not how many peacekeeping troops are on the ground but where they are deployed."

Though some internally displaced people are voluntarily returning, unless security improves, few of the 140,000 or so Malian refugees in neighbouring countries are likely to return, said Coulibaly.

Among Timbuktu residents living as refugees in Mauritania's Mbera camp, distrust is pervasive. Few had imminent plans to return. Mohammed Ag Adnana, a Tuareg from Timbuktu, told IRIN he did not trust any of the troops in place.
"If you have light skin [if you are a Tuareg or Arab], they will attack you in the north," he said.

Returns are a Catch-22, said Coulibaly: "Returns [of IDPs and refugees] as well as the reopening of clinics, schools and government institutions are all important to improve security and prevent the terrorists from taking back some areas."