Many times before, Abdul Rashid, 30, a general practitioner, has volunteered in emergency situations.

“I believe it is my duty to use my medical skills to help. I went to Sindh Province in 2011 to help flood victims; I helped victims of the 2007 cyclone in Balochistan; and I worked in Pakistan-administered Kashmir as a medical student after the 2005 earthquake for months,” Rashid told IRIN.

But now, while he is eager to reach the district of Awaran in southwestern Balochistan Province, the area worst hit by a magnitude 7.7 earthquake that struck in the afternoon of 24 September, Baloch friends have advised him against going. “Ethnically, I am Punjabi. And Awaran town, and the district in general, is a stronghold of Baloch nationalist groups, locked in battle against state forces,” he said. “They have regularly attacked non-Baloch people before.”

The security situation is a concern for many international humanitarian agencies trying to help the victims of the earthquake, which has killed at least 348 people and wounded hundreds more, with the death toll still rising.

The Baloch ethnic group has long had nationalist aspirations, complaining it is excluded and marginalized by the government and does not receive its fair share of revenue from the natural resources in Balochistan. The region has a long history of insurgency, which has intensified since the 2006 killing of Baloch nationalist leader Nawab Akbar Bugti. Baloch nationalists blame the Pakistan military for his death.

“The security situation is always unpredictable anywhere in Pakistan,” Haseeb Khalid, senior media officer at the Islamic Relief’s office in Pakistan, told IRIN. “In Awaran, there may be some security threats for relief and aid workers, especially for those who are non-Baloch.”

Since Islamic Relief already had a presence in the area and could work with local people, Khalid said, “the situation may be safer for us.

On 25 September, unknown persons opened fire on a team of doctors and paramedics attempting to reach the quake zone. There were no casualties.

According to an update the same day by Islamic Relief, this was just one of three recent incidents since 23 September in which assailants opened fire in Balochistan against aid workers or security forces, leading to reported deaths.

As he flew into Awaran on 26 September to assess the situation, Maj-Gen Mohammad Saeed Aleem, chairman of the National Disaster Management Authority, also came under attack; his helicopter was targeted by rockets, according to media reports. He escaped unharmed.

“The truth is we are scared and won’t be going in,” the head of an NGO based in Karachi, who asked not to be named, told IRIN. “This is bad for affected people.”

The security concerns come on top of other challenges. The logistics of assessment and rescue are daunting, with Awaran district spread over 21,000sqkm of inhospitable territory, which houses around 300,000 people. It is served by an inadequate road network and takes hours to reach, even from the closest major cities.

“No one has come to help us, and we urgently need shelter, food, water and medical help,” Inayat Baloch told IRIN over a crackly phone line, from just outside Awaran town. He said his house had been reduced to a pile of rubble. “My three-year-old son has a broken leg; he has been crying in pain but there is nothing I can do.”

The number of confirmed deaths, meanwhile, continues to rise as reports come in from remote areas.

According to Balochistan’s Provincial Disaster Management Authority (PDMA), there are now 348 confirmed deaths and over 500 injuries.

Entire villages in and near Awaran district have been reduced to piles of debris after a 7.7-magnitude earthquake struck Pakistan's Balochistan Province on 24 September 2013. 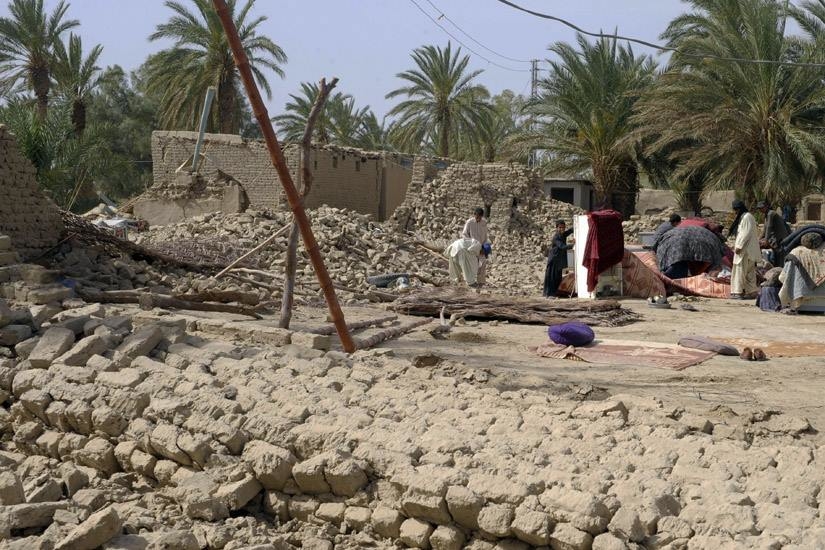 The PDMA says “almost all homes” in Awaran town and nearby surrounding areas are destroyed or damaged. Reports from other parts of the district are coming in, with some media accounts saying 80 percent of mud houses in the district have been destroyed. Most of the homes in the rural areas of Awaran are made of unbaked mud bricks.

The extremely poor medical infrastructure in the district does little to help. “There are just no means to help the injured, and because of the security situation health workers won’t go there,” said Jan Muhammad Buledi, a spokesman for the provincial government.

The Chief Minister of Balochistan has reportedly asked nationalist groups for calm, but a local administrative official in Awaran, who wished to remain anonymous, said: “This may not be effective.”

As the PDMA and UN begin a rapid assessment of needs, major humanitarian organizations are weighing their options.
Awaran “is not easily accessible by road due to damaged road links and the security situation, as non-state armed groups are present in the area and one attack on the medical team has been reported,” Arif Jabbar Khan, Oxfam’s country director, said from Islamabad. “It is going to be challenging for the aid workers given the security situation and inaccessibility issues,” he said.

In the meantime, people are desperate.

“My parents, two sisters, their husbands and small children are out there,” said Nazir Ahmed, a native of Awaran who works in Quetta. “I can’t even get in touch because the telephone networks are so bad. I understand they are all out in the open, but this is information from others.” He said getting to his home village could take “three days or more” since many roads were just dirt tracks.

“It is terrible not to know.”