World leaders and others who have pledged to help Mali recover from nearly two years of conflict will gather in the Mali capital, Bamako, today for the official inauguration of the newly elected president, Ibrahim Boubacar Keita.

"I want to reconcile hearts and minds, restore true brotherhood between us," said President Keita, echoing his campaign speech after taking the oath of office on 4 September. "So that all the different people can play their part harmoniously in the national symphony."

This came days after protesters jeered and threw stones at government officials visiting the northeastern city of Kidal - a Tuareg-rebel stronghold and the base of the National Movement for the Liberation of Azawad (MNLA), which seized the north of the country with the help of various Islamic factions last year. The delegation from the newly formed Department of National Reconciliation and Northern Development came to meet with the local leadership ahead of negotiations to restore national unity.

Thanks in part to his reputation as a strongman, IBK, as the president is known, was elected with over 70 percent of the vote over his second-round opponent, Soumaïla Cissé. He was touted as the candidate who could bring order back to Mali and enjoyed widespread support at home and abroad - including thinly-veiled favoritism from France, which remains a presence in Mali after leading the push to liberate the north nine months ago. But analysts say the current situation requires more than strength.

"People want credibility, but the president is aware that any unilateral move on his part will be dangerous," said Gilles Yabi, the West Africa project director for the International Crisis Group. "This is a time for dialogue. This is a time for compromises. But it's also a time to signal important principles."

On 18 September, three northern Mali armed groups pledged to negotiate a return to peace in the country's north. The Tuareg separatist rebels who had first swept through the north were later ousted by Islamist militias; the Islamists occupied the three regions of north, often brutally, for nine months, following the March 2012 overthrow of Amadou Toumani Touré.

UN, French and Malian forces are maintaining stability as the government forms a reconciliation plan, but there is distrust on all sides. Some in the capital talk nervously about negotiations between MNLA and Malian officials and the possibility of a pardon for rebels, saying that would only re-start conflict in places like Timbuktu, Bourem and Gao, capital of the short-lived and unrecognized Islamic Republic of Azawad.

"Impunity is not an option," said Abdoulaye Boncana Maïga, the pacific leader of the Young Patriots Movement in Gao, guitar in hand after strumming a song about love. "Without justice, there can be no reconciliation. Each community must bring its offenders to be judged."

Gao was the site of the occupation's greatest resistance, as well as some of its gravest crimes. When local teacher Idrissa Omorou was killed in June 2012 by MNLA members, the Young Patriots' Movement, along with other youth groups, confronted the rebel group in the streets of Gao and dispersed only when they were fired upon, leaving 15 wounded and two dead. There were three marches of this kind over the course of the occupation.

"There were those of us who did not protest for fear of being shot by the MNLA and MUJAO," says Maïga. "We do not fear the government and protests will be much larger if they do not listen to us."

The exodus of government officials and the military in the spring of 2012 left a power vacuum in the city, which was filled by civil society. Gao's leaders remain influential for the roles they assumed during and after the occupation. And because the state has not fully returned to the north's largest city, they still govern many aspects of life here.

In lieu of paid sanitation workers, the women's group "Don't Sit, Work" currently cleans streets, schools and riverbanks in broad daylight. But its activities took on a more clandestine approach during the occupation - when members were forced to cover themselves if it was necessary to leave their homes. The group often met in secret to council the normally headstrong women of Gao to comply with the new morality laws in order to avoid the Islamic prison. And if women were taken into custody, they would mobilize to prevent punishments prescribed by the Islamists' interpretation of Sharia law - or treatment condemned by it.

Teaching about the impact of war 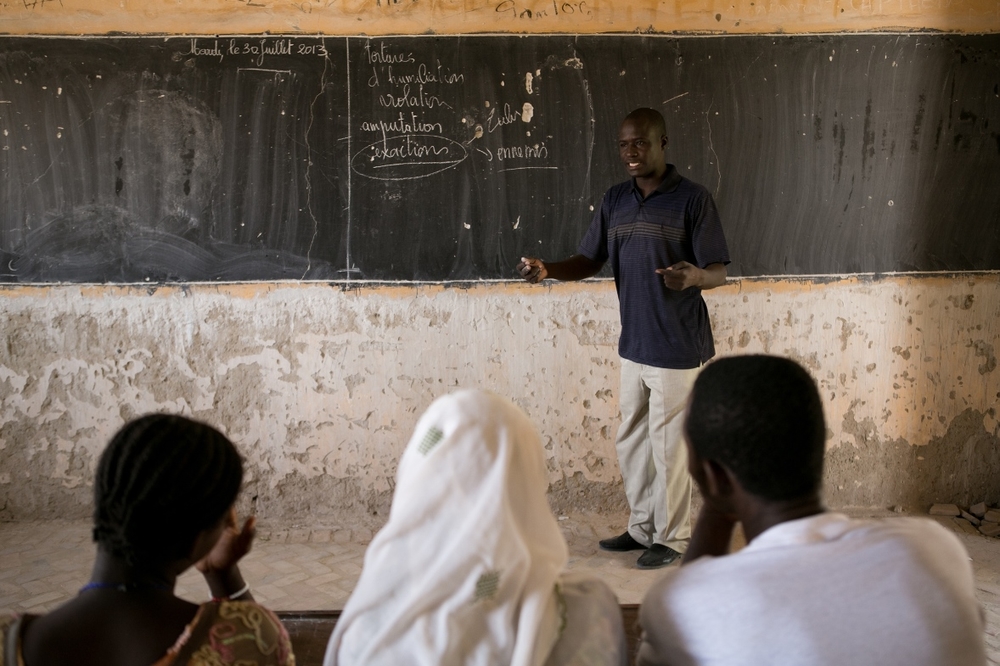 Aminata Idrissa Maïga encourages forgiveness and reconciliation during her semiweekly radio show on 86.8 FM, but she says many of the women in her audience are not ready for that. She asks for the same consideration from the new government.

The Department of National Reconciliation and Northern Development will first have to reconcile the spectrum of positions on how to handle Malians who joined, abetted or were complicit with occupying forces.

Idrissa Maïga says that many of the crimes committed were, unforgivable, but that the "sons of Gao" who would dare come back should get the benefit of the doubt. "We can pardon them because they didn't have a choice. Someone who doesn't even have anything to eat, if you offer them $100 or $200 a month, they will go with you," she says.

Fellow broadcaster Malick Aliou Maïga disagrees. After repeated arrests and detentions for refusing to change his anti-occupation message on Gao's private AADAR FM station, he was taken from the studio, beaten with chains and pipes, and left for dead in a football field in August 2012.

He maintains that his community in the region of Gao holds the tradition of Al-Kawal, an ancient peace accord between the light-skinned Berber populations and the black Songhay people.

"We need them and they need us, since before French colonization," said Ag Alhassane, a Gao resident, former tour guide and Tuareg community representative. "But now we're afraid that there are people who want to divide us by color."

Kidal is the birthplace of the rebellion, and, thanks to a last-minute deal signed between the Malian and MNLA leaderships that allowed elections to take place in all of Mali's eight regions, it remains a sanctuary for many Tuareg militants who took part in the rebellion and subsequent occupation.

Many analysts say new economic programmes will have to reach further, agreeing that the lack of economic opportunity in the north was the most significant factor leading to the rebellion - one which Bamako can no longer ignore.

Northern rebellions, dating back to 1962, have never achieved independence but have led to past increases in northern autonomy, as well as racial diversity in government and the military. Although Zahibi Ould Sidi Mohamed, a member of Mali's Arab minority and a former rebel leader, was given the reins of the foreign ministry, the army has voiced intolerance for the practice after many Tuareg troops defected to the MNLA at the start of the latest rebellion.

For Ag Alhassane, a Gao resident and Tuareg, who lost his once-successful business following the rebel occupation, justice is important. But justice is temporary, he said, and the only way to make sure it never happens again is through development.

"If we achieve that, you will see, all of these problems will dissolve like sugar in hot water," he told IRIN, while sipping a cup of sweet tea.