When Linda Lukambo, 21, asked his parents why they had neglected to get him the polio vaccine, “they told me, ‘we did’. So why have I got polio?” he told IRIN in North Kivu in the Democratic Republic of Congo (DRC). “Maybe they took me for vaccinations, but maybe not for polio.”

Lukambo first started having difficulty walking while at a pre-school in Tchambucha Village, near the North Kivu town of Walikale. After six months he was, he says, “still walking a little bit. And then I started to move on my bottom, and then on my knees, and it got worse and worse.” By the time he was in primary school he was “crawling on all fours”.

Polio, or poliomyelitis, a highly infectious, viral disease causing paralysis and in some cases death, has been eradicated in most countries through large-scale vaccination programmes. According to the UN Children’s Fund (UNICEF) only Nigeria, Pakistan and Afghanistan still have endemic polio transmission. UNICEF, the largest buyer of children’s vaccines in the world, recommends children receive at least three doses of the oral polio vaccine to ensure full immunity against the disease.

DRC is considered an “importation country”, meaning it experiences outbreaks of the disease because of low levels of immunity among the population. Polio eradication campaigns face myriad obstacles, including large-scale population displacements caused by DRC’s persistent conflicts, poor access to isolated communities, religious objections to the vaccine and weak infrastructure.

In 2007, Lukambo had a series of year-long leg-straightening operations at Goma’s public hospital, paid for by local NGO L´Association Congolaise Debout et Fier. (ACDF). ACDF then provided free leg braces, which enabled him to walk upright. He remembers being “very happy - I did not like the ground,” he said.

He has since become the caretaker at the ACDF centre, where polio survivors come for leg brace fittings or to just hang out or sleep over in a non-judgmental environment, as society often treats the disabled with suspicion and prejudice.

Claudine Muhombe, 7, from Rugare near Masisi, arrived at the centre in April. She now scampers around the centre’s yard, uses the window frames as a climbing frame, and is quickly discovering how to walk with the aid of crutches and braces, also called callipers.

“It’s not difficult to walk,” she told IRIN. “I like walking. My dad came [in June] to visit. He was very happy when he saw me, and I was happy to see my dad happy.”

Joseph Kay of StandProud, the international and fundraising arm of ACDF, told IRIN that Claudine’s rapid progress meant she would probably not stay at the centre for long.

Learning to walk with the callipers and crutches can take weeks or months, requiring intensive physiotherapy to regain strength and balance. But even then, not all are able to.

"It was difficult to learn to walk with leg braces. It took a lot of time to learn. I had no strength in my lower back"

Lukambo’s transition from crawling on the floor to standing on his feet was not as swift as Claudine’s. After his leg-straightening operations, the wounds from the surgery continued to weep and would not heal. He had to undergo a skin graft, with skin taken from his thighs for his knees.

The years of crawling also damaged his hip, and an operation was performed to correct it. When he was finally ready to don callipers, it took nearly four months of daily practice to walk upright.

“It was difficult to learn to walk with leg braces. It took a lot of time to learn. I had no strength in my lower back, so I had to wear a corset,” he said.

After a few months of walking, the muscles in his lower back recovered and the corset was discarded, but Goma’s broken streets were an “obstacle course.”

“It’s something you have to get used to… But I am at the same level now as other people,” Lukambo said.

The first polio vaccination campaigns in the country began in the mid-1980s. At one stage, after no cases were recorded between 2001 and 2005, polio was considered eradicated in DRC.

In 2008, after an “epidemiological situation evolved in the central African region,” resulting in dozens of new infections in the country, the government and donors announced a polio vaccination programme targeting seven million children.

A polio suffer at the a local NGO, l´Association Congolaise Debout et Fier [(ACDF) Standing and Proud] centre in the eastern Democratic Republic of Congo city of Goma washing clothes 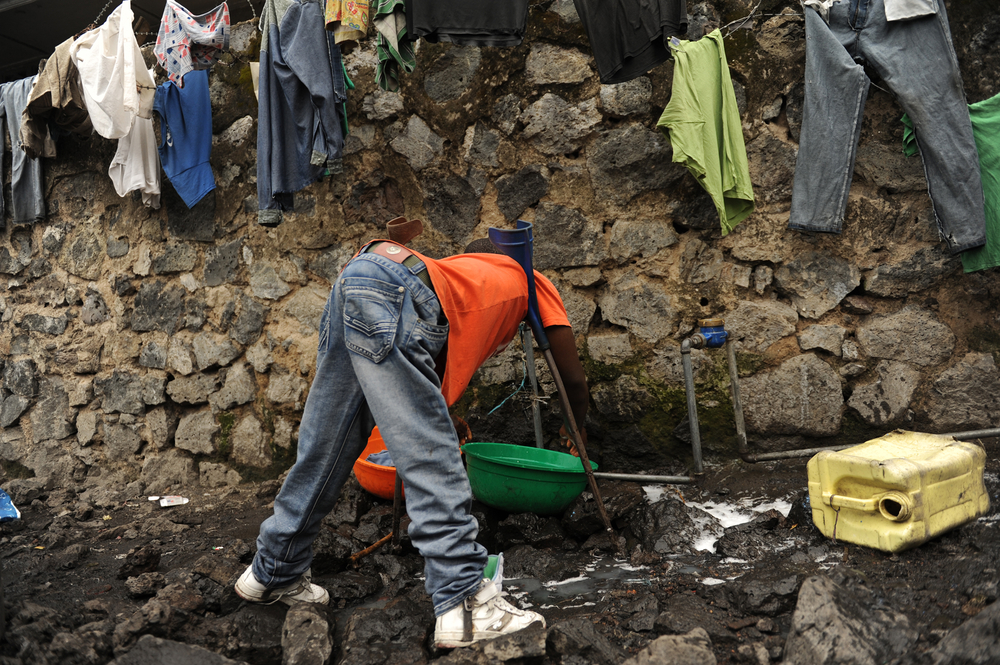 Emmanuel Nomo, UNICEF’s DRC polio team leader, recently told IRIN there had been no registered cases of polio in the country since December 2011.

“Authorities, vaccination teams and parents are doing the best they can to reach all children everywhere, including in the Kivus, despite the challenge of insecurity and lacking access,” he said.

This August, during the country’s National Immunization Day (NID), officials will hold a second round of vaccinations targeting 1,374,836 children up to five years old in North Kivu and 1,144,750 in South Kivu. According to independent monitoring by the World Health Organization (WHO), 3.5 percent of targeted children in North Kivu were missed in the July first round of vaccinations, while in South Kivu the number was 5 percent.

“Even though the situation remains difficult in both Kivus, the second [round] of the NID is scheduled to take place throughout both provinces,” he said.

Nomo said issues with maintaining the cold chain, the system of temperature controls required to keep vaccines potent, were being addressed through the introduction of solar fridges by the government, with support from UNICEF, the Global Alliance for Vaccines and Immunization (GAVI), and the World Bank. Currently, only 30 percent of the country’s health centres have a functioning refrigerator.

“Providing good quality vaccines at the beneficiary level remains a challenge,” he said.

“We've made thousands and thousands of callipers. Hard to know exactly how many since 1998, but there are at least 5,000 individuals who have benefited over the years,” Kay said.

Louis Nwande-Muhala, a calliper technician at the Goma centre, says it takes about two days to construct the custom-made leg braces - if there is electricity and the materials are available. The braces are made of steel, with leather used for the joints and hip support. The workshop also does repairs on braces, which have to deal with the country’s broken streets.

Nwande-Muhala’s left leg was paralysed at the age of five, not from polio, but from a quinine injection into his hip muscles, an old treatment for malaria that is still practised by some nurses despite the availability of safer treatments.

He first encountered the NGO when he wanted to acquire a leg brace. After being fitted for the brace, he decided to give up his tailoring job to make callipers. “I have made a lot [of leg braces]. I don’t know how many, but many, many, many.”