The precarious security situation in the Central African Republic (CAR) is worsening seasonal food insecurity and increasing the burden of disease, especially among children, warns a humanitarian official.

“In our projects, we do see increasing numbers of children with severe acute malnutrition (marasmus and kwashiorkor) [but] the increases seen in MSF projects are so far in line with seasonal experience. However, the instability has aggravated pre-existing food security problems: a poor harvest, poor food supplies and volatile food prices and, as a result, the country could also be at risk of a rise in malnutrition cases,” Ellen Van Der Velden, the head of mission of Médecins Sans Frontières (MSF) in CAR, told IRIN in an e-mail.

Kwashiorkor is a health condition caused by severe acute malnutrition (SAM) and is characterized by oedema. (See: IRIN’s Food and nutrition jargon buster).

Marasmus is the most common form of acute malnutrition in nutritional emergencies and, if untreated in its severe form, can very quickly lead to death, according to the UN Children’s Fund (UNICEF). UNICEF notes the disease “is characterized by severe wasting of fat and muscle, which the body breaks down to make energy.”

Diseases on the rise

According to Van Der Velden, MSF’s recent exploratory mission in southwest CAR, in the areas of Nola, Boda, Berberati, Gamboula and Gadzi, revealed an increase in levels of global acute malnutrition (GAM), which ranged from 6 percent to 10.3 percent. SAM levels ranged from 1.3 to 5 percent. (GAM refers to the total rate of acute malnutrition in a given population, while SAM is a sub-category of GAM.)

“This situation, together with the malaria peak, increases the vulnerability of children in CAR,” she said.

Between January and March, MSF-supported health facilities in CAR treated 74,729 patients for malaria, a dramatic increase over the same period in 2012, when 50,442 patients were treated for the disease.

A burnt village on the road to Bocaranga, northwest CAR 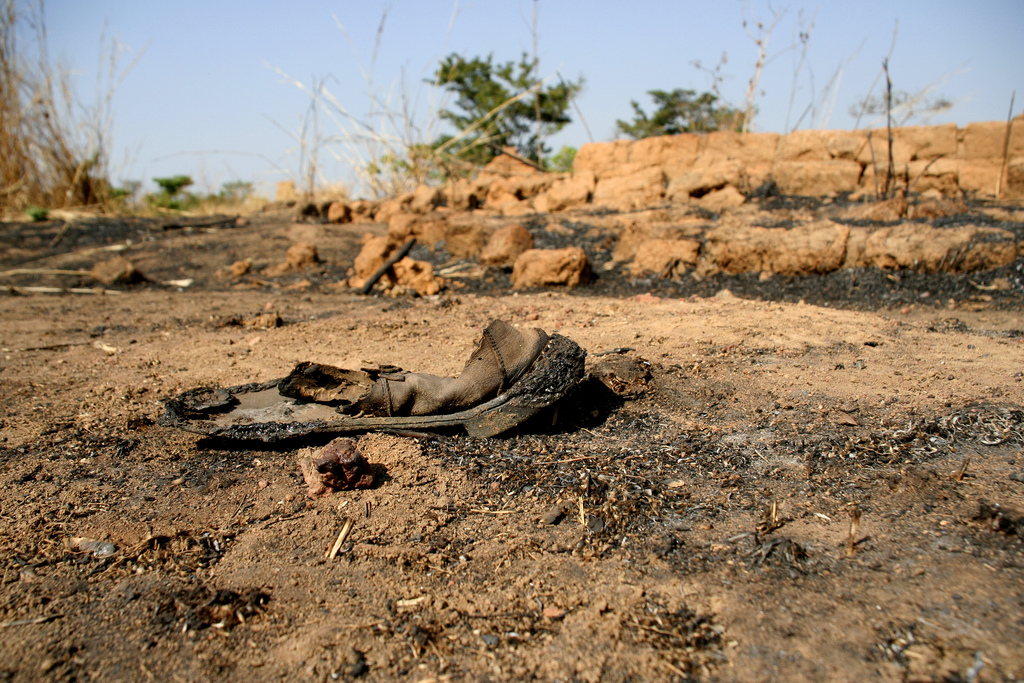 In the area of Boguila, in western CAR, for example, malaria accounted for 61 percent of outpatient consultations for under-fives in the first quarter of 2013, compared to 41 percent over the same period in 2012.

The spike in diseases comes as health services are severely disrupted. Health infrastructure were looted and staff fled amid the general insecurity following the 24 March Séléka rebel ouster of the government.

Access to healthcare and medical supplies is also a problem.

“In a country which already had the second-lowest life expectancy in the world, at just 48 years, the people are now even more at risk,” said Van Der Velden. “The impact of the recent crisis has been tremendous. Fear of movement has further reduced access to healthcare, loss of income has made it even more difficult to pay medical fees, and unreliable drug supply systems have been completely collapsed. Mortality rates are only likely to worsen in the coming months.”

In a 28 June situation report, the UN Office for the Coordination of Humanitarian Affairs (OCHA) noted that malnutrition treatment services at therapeutic feeding centres and units in Berberati, Mambéré- Kadéï Province (South) had stopped due to a lack of nutritional supplies.

The population in Berberati is susceptible to malnutrition, and the lack of money to buy food has forced households there to reduce the number of meals they eat per day from two to one, according to OCHA.

"The impact of the recent crisis has been tremendous. Fear of movement has further reduced access to healthcare, loss of income has made it even more difficult to pay medical fees, and unreliable drug supply systems have been completely collapsed. Mortality rates are only likely to worsen in the coming months."

According to Van Der Velden, “Some medical nutritional supplies are available in the country, but [it] is beyond anyone’s capacity to bring them to all health facilities in the country and assure their correct use.”

According to OCHA, in the areas of Damara and Sibut, “the population continues to live in their farms or in the forest and come to town only during the day to obtain essential items and return by 3:00pm”.

Seleka forces have installed their own local administrative and judicial authorities in Damara and Sibut, negatively impacting humanitarian access to affected populations there, notes OCHA.

In a 5 July CAR briefing, the UN Refugee Agency (UNHCR) noted, “Overall, there remains a serious absence of security, and lawlessness is widespread.”

Human Rights Watch (HRW), in a 27 June report, called on the UN Security Council to sanction those involved in rights violations. “Séléka fighters are killing civilians and burning villages to the ground while some villagers are dying in the bush for lack of assistance,” stated Daniel Bekele, HRW’s Africa director.

The Séléka movement is also grappling with internal problems, the latest being the arrest of a minister from one of its constituent groups, the Convention Patriotique pour le Salut Wa Kodro, who is accused of recruiting mercenaries. Clashes between Séléka members and armed civilians on 28 June caused several deaths in the capital, Bangui.