The northeastern Kenya county of Mandera is experiencing a spike in inter-clan clashes, with several deaths recorded in the past week. Episodes of insecurity, since March 2012, have affected the delivery of aid to thousands of displaced people as well as access to basic services, say officials.

On 23 June, an attack in the village of Choroqo, in the Banisa area of Mandera, left at least 16 people dead, according to the Kenya Red Cross Society (KRCS). "The KRCS evacuated six critically injured casualties to Mandera by chopper. Hundreds of families have moved to Olla and nearby [bush] due to fear of more attacks," said KRCS in a statement.

The Choroqo raid followed an incident in which several people were hacked to death and others shot dead in Mandera and the neighbouring district of Wajir.

Leaders from the warring Garre and Degodia clans, both of Somali ethnicity, had on 23 June signed a peace agreement to stop the clashes, with hefty fines set for those engaging in violence.

But on 24 June, four people were injured after a grenade was hurled at a crowd near the stadium in Wajir, and security officers narrowly escaped death on 25 June after an improvised explosive device detonated.

Since March 2012, the violent inter-clan conflict in Mandera has led to the deaths of at least 85 people, internally displaced 25,000 and affected thousands of others, according to an update by the UN Office for the Coordination of Humanitarian Affairs (OCHA).

But residents say the toll is even higher.

"Not all the fighting in far-flung remote areas has been reported. The minimum number of those killed is more than 200, [including] herders, elderly people, women and children in remote grazing fields, and [people] across the border in Ethiopia who have been killed while escaping. Many fighters have also been killed," said a worker from a community-based organization in the Banisa area.

The county of Mandera straddles the Ethiopia and Somalia borders and, like most of the northern counties of Kenya, is largely underdeveloped, with low access to basic services.

Causes of the conflict

"The protracted tensions and conflict between the two communities largely result from competition for natural resources and political disagreements over governance issues in the new devolution structures," states an OCHA bulletin for 22 May through 22 June.

The Degodia and Garre clans are mainly fighting for political interests, according to residents.

"The Garre clan is fighting to protect and defend its political gains. The rival Degodia are using violence to avenge the spate of attacks and to express their displeasure and bitterness for the [political] loss. Their anger is towards the Garre, who they believe planted barriers that denied them any political seats or nominations," said a long-serving civil servant in the area, who is from a different Somali clan.

Ali Abdille, of the Degodia clan, said politicians had sought to displace his clan ahead of the March general election. "People were killed for months. Almost all the Degodia fled Mandera and, in particular, Rhamu [town]. We were disenfranchised and forced to be far from voter registration points," said Abdille.

After the elections, he added, the Degodia had been promised nominations to the Mandera County government but were short-changed.

"Politics is competitive; the community with a good strategy won. Nobody can force or demand leadership. A community can only negotiate but not use force," said Adan Noo, a Mandera legislator from the Garre clan.

The process of devolution is expected to bring resources to the counties and has raised the stakes in local-level elective posts.

The northern Kenya counties in particular have been affected by conflict related to devolution due to perceived new opportunities in the previously neglected and underfunded regions.

At present, the Kenya Red Cross Society (KRCS) is helping to deliver emergency support to affected residents in Mandera, according to the communication officer Nelly Muluka.

But there are challenges. 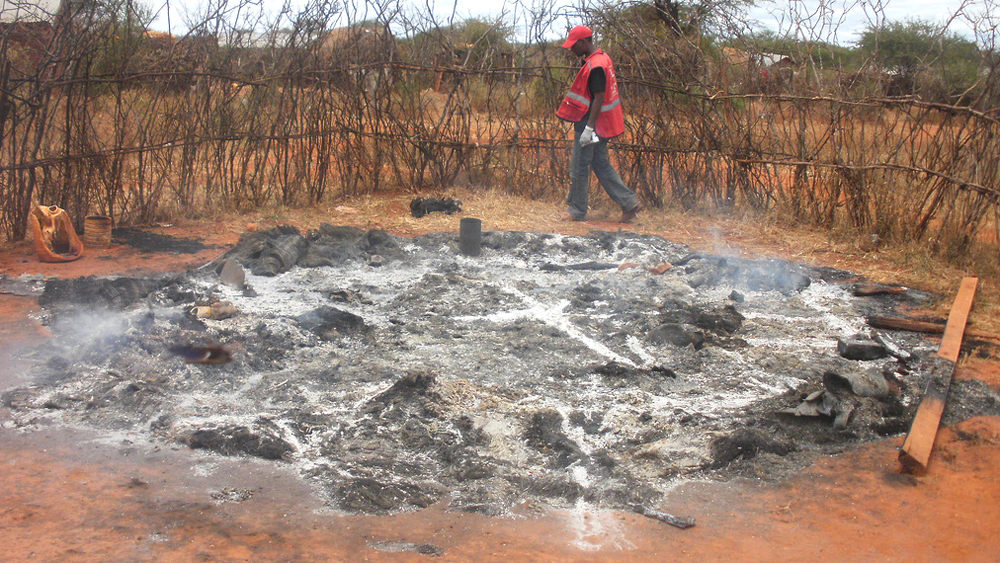 "The increasing number of those displaced is overstretching us. We were doing our best to respond, but we are faced with depleting stocks of non-food items," said Muluka.

The KRCS is often the first responder to emergencies and disasters in Kenya.

She added: "The county of Mandera is vast. The terrain is very bad - it's expansive and therefore costly to deliver [aid] to respond and offer emergency and relief assistance."

KRCS is relying on helicopters to airlift injured persons from the remote areas where the latest attacks occurred, due the poor roads and the poor state of health facilities. The use of helicopters is exponentially increasing the cost of delivering assistance.

"We have to trace the fleeing families. The injured have to be airlifted to Nairobi because the local hospital lacks the facilities required to deal with complicated cases like bullets lodged in victims' bodies and wounds [in] critical areas,'' she said.

"We have suspended our water, sanitation, and health programme in Takaba area [in Mandera]. We were threatened and accused on several occasions of supporting one of the rival groups," added the project manager of a local NGO, who requested anonymity.

According to OCHA, at least 5,000 students have been forced out of school due to the insecurity in Mandera.

Some 21 schools have so far been closed, with pupils and teachers among those displaced, Ali Abdi, a Kenya National Union of Teachers' northeastern executive committee member, told IRIN.

"Mandera was in the last position in the Kenya national primary exams last year. It was second last in the secondary examinations. I am afraid it will be the same and not any better this year," said Abdi.

Students taking the University of Nairobi's extramural courses in Mandera have also been forced to relocate to the town of Mwingi, south of the northeastern capital of Garissa.

"More than 100 students are now in Mwingi. It's costly, as we are renting hostels. This is making the cost of learning very expensive. All the lecturers moved so we had to follow them," said Abdullahi, a student.

Medical and teacher-training colleges have similarly been affected, with some civil servants seeking job transfers from the region.

Health services have also been adversely affected, with a polio vaccination campaign being suspended in areas close to the Somali border.

At present, the government has deployed security officers and commissioned a disarmament exercise in the affected areas, according to OCHA.

President Uhuru Kenyatta recently called for a peaceful solution to the clashes in Mandera so the army will not have to be sent in. The military option is often criticized by human rights groups in northern Kenya due to associated rights violations.

According to OCHA, food supplies have been prepositioned in Mandera, but "needs continue to emerge as the conflict persists, with current response gaps in shelter, food and medication".

"The conflict has further resulted in tensions among related groups of affected communities in Ethiopia, who are reportedly engaged in retaliatory attacks. Both communities are reportedly mobilizing support from their relatives across the border. The situation on both sides of the border remains tense, and there is fear of retaliation," adds OCHA.