Hit hard by hot and dry weather, farmers near Laos’s capital are looking for new ways to adapt to climate change and protect their cash crops as the temperature in recent months rose above 40 degrees Celsius.

Khamphou Phanthaboun, the chief of an organic vegetable growers’ group in Nontae, a village in Xaythany District near Vientiane, said his vegetables are dying in the unseasonable heat.

“The bore well is dry so there is not enough water [for] the vegetables,” he said.

Weather experts say that irregular weather patterns since 2007 have caused the monsoon season in Laos, typically first seen in mid-May, to come as early as March or as late as June. This year, it came in early May after drought-like conditions left central and southern parts of the country parched.

A recent US Agency for International Development funded study on climate change in the lower Mekong Basin (including parts of Thailand, Laos, Cambodia and Vietnam) identified climate change “hotspots” where conditions will become unsuitable for crops currently grown there. Two Lao provinces (Khammouan in the country’s centre and Champasak in the south) are both projected to lose crop yields.

The study projected higher-than-global average temperature increases in the basin (a 4-6 Celsius degree jump versus the global estimate of a two degree increase), which will mean “dramatic changes in the comfort zone of crops... which could have serious negative consequences for the livelihoods, health and food security of the local communities in these areas.”

Bounteum Sysouphanthavong, acting head of the Laotian government’s Weather Forecasting and Aeronautical Meteorology Division of the Meteorology and Hydrology Department, told IRIN temperatures so far in 2013 have climbed above the average high of around 31 degrees Celsius for this period.

Rainfall in central Laos, around Vientiane, has also been less than normal. From January to April, the region recorded just 92mm of rain, which averages 157mm during those months. The wet season started off slowly with 176mm of rain, almost 100mm below the average for May. 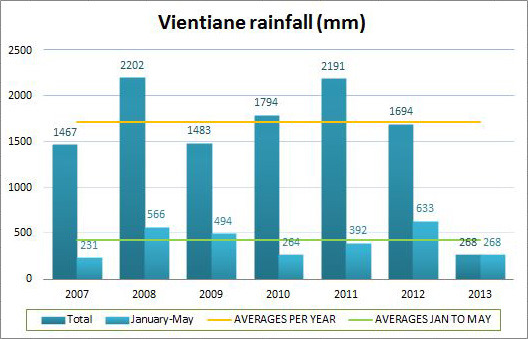 Phanthaboun, who started growing vegetables in 1996, has struggled to adapt to drought-like conditions. Organic crops are usually in high demand and can earn up to three times more than those grown with chemicals. The recent weather, however, has cut his vegetable sales by nearly half. Friends in his village face similar issues, with many families’ cultivable land shrinking.

Since 2005, the government has encouraged farmers to abandon pesticides and chemical fertilizer to exploit a growing organic foods market.

Most of the 170 families in Phanthaboun’s village grow cash crops (including turnips, lettuce and Chinese cabbage), with about 130 families using chemical fertilizer. About a dozen families cultivate organic vegetables.

The Xaythany District, with a population of about 167,000, mainly produces crops for Vientiane’s markets, supplying some three tons weekly of organic vegetables.

In 2009, Khamphou began to have some success growing vegetables that withstood hot weather and pests after rotating his crops post-harvest. “If we grow the same vegetables in the same pot the whole year, the pest will stay permanently,” he said.

With guidance from local agriculture officials, Phanthaboun built a greenhouse with special netting as roofing. “I tried to grow some kinds of vegetables in the house, but they did not grow well and died the same as if they were planted outside,” he said.