West African and Sahel countries are setting up measures to minimize flood damage as the annual rainy season approaches. The African Centre of Meteorological Applications for Development (ACMAD) in a seasonal weather outlook says near-average or above-average rainfall is likely over the western Sahel, which stretches across Mauritania, Senegal and western and central Niger.

These regions are “expected to be the area with the highest risk of above average number of extreme precipitating events that may lead to flash floods”.

Heavy rains in 2012 triggered extensive flooding in Cameroon, Chad, Niger, Nigeria and Senegal, with hundreds killed, millions left homeless and vast areas of farmland inundated. In many of these countries, the flooding was the worst in years.

Average or below average rainfall is likely in Lake Chad and central Chad regions as well as along the Guinean coast from Cameroon to Liberia, ACMAD said.

Allegra Baiocchi, head of the UN Office for the Coordination for Humanitarian Affairs (OCHA) in West Africa, at the annual meeting of the regional committee for disaster management last week, said globally 4.4 billion people have been affected by natural disasters over the past 20 years.

According to the UN Office for Disaster Risk Reduction (UNISDR), direct losses from disasters have been underestimated by at least 50 percent. The cost to the global economy is in the region of US$2.5 trillion since the start of this century, said Baiocchi.

At the meeting, representatives of the Economic Community of West African States (ECOWAS) agreed to better harmonize their disaster response, find ways to collect better climate-related data and share it with those who need it - farmers and pastoralists - and to focus more on preparedness. “ECOWAS nations [must] work towards building regional drought, flood and epidemics early warning systems and search and rescue platforms that will enhance our cooperation,” said Nigeria’s National Emergency Management Agency (NEMA) head, Alhaji Mohammed Sani Sidi.
An efficient, operational disaster platform should include actors from several different sectors, said Dufour, including government, civil society and the private sector.

The financial impact of last year’s flooding in Nigeria was a “wake-up call” to governments, he said. “There’s more attention this year as decision-makers have realized the human and financial costs involved.”

Awareness-raising of at-risk communities is expanding, said Dufour, pointing to community-level efforts in southern Nigeria, Togo and Benin, but this needs to grow further. “There is a need to work with local level communities so they know what is at stake,” he said.

IRIN spoke to disaster management officials and aid agencies about what they are doing to prepare for potential flooding this year.

We learnt a lot of lessons after last year’s floods,” said Ibrahim Farinloye, an information officer with NEMA. “There is need to invest in disaster prevention. The state and local government authorities are now showing commitment…

“Having realized what some states went through last year and with these predictions, the local authorities have started expansion of drainage, construction of new drainage, demolitions of structures that are blocking water ways. The traditional rulers are also now showing much more interest in flood preparation,” Farinloye told IRIN.

He said NEMA has conducted public information campaigns, trained volunteers (including a unit of volunteers), and organized training on emergency responses such as first aid and the identification of high ground and other safe areas for evacuation. Teachers have also been urged to train pupils on how to stay safe during flooding.

“We have also signed memoranda of understanding with private companies to use their equipment during emergencies,” he said.

Nigerian weather and hydrology experts in April forecast an increase in rainfall across the country this year compared to 2012. Nigeria Hydrology Services Agency has suggested lowering water levels on major reservoirs to accommodate the expected floodwater.

NEMA spokesman Ezekiel Manzo said they are advising state authorities to relocate people in flood-prone areas, particularly those living on the plains of the River Benue and River Niger.

“In all our eight offices across the country we have stockpiled basic household items, food, clothing and sanitary materials for women and children - not only for the floods but for any disasters,” he said. They have also bought earth-moving equipment and they are doing a lot of awareness-raising of flood risks.

“The government must move very fast to enhance the awareness to prevent any disasters,” he said.

In 2012 Niger experienced the worst floods on record since 1929, with almost half a million people displaced and at least 68 deaths, affecting 70,000 households in total.

The fifth neighbourhood of the capital Niamey, on the banks of the Niger River, was seriously affected by the flooding, with 400 households taking refuge in schools and other public buildings.

Almost one year later, some of these households are still in tents managed by the municipal authorities.

“They will be there for some time,” said the mayor of the neighbourhood, Issa Hamni Hima.

The neighbourhood, with the help of the state, started an ambitious rehousing project of the flood-displaced. Some 200 families have been moved to higher ground and given new land, which is half of the population concerned - but only in that neighbourhood.

Some families living on the new site told IRIN they were pleased they had water pumps - and according to the mayor, the authorities are negotiating with the electricity company to provide them with power.

Oxfam held a disaster contingency planning workshop last week, according to its disaster manager Patrick Andre, but implementing it will be a longer-term project, he said. “Most agencies have not yet put in place contingency stocks in at-risk areas, for instance,” he told IRIN.

Following torrential floods in 2012 which displaced hundreds of thousands and swamped 255,720 hectares of cropland, several hundred families in the capital N’djamena were moved to higher ground, according to Qasim Sufi, head of the International Organization for Migration (IOM) in Chad, which drilled wells for re-housed families. 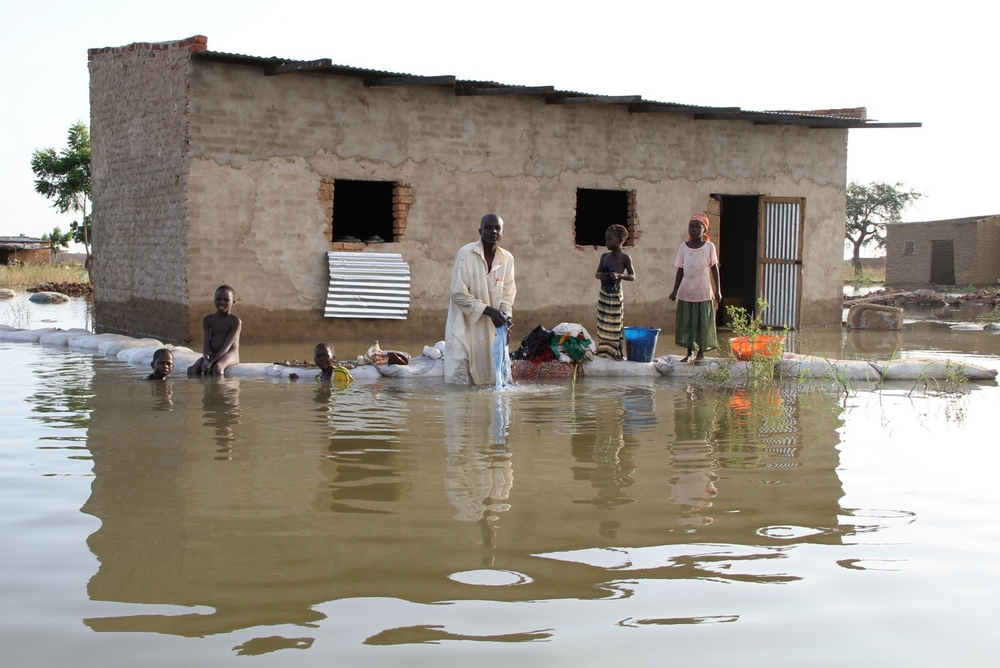 During the 2012 floods the Chadian government reinstated a crisis task-force made up of members of several ministry focal points, such as Health, Urban Planning, Civil Protection, Social Acton and others. The structure will be reinstated if floods hit this year, said Pierre Peron, spokesperson for OCHA.

According to him, governors and mayors of N’djamena and flood-affected cities in the south such as Bongor, are trying to identify the right sites for flood-displaced people this year. Southern Chad, which is most affected by floods but least frequented by aid agencies, complicated response efforts, said Peron. OCHA is working with local authorities across the south and has trained dozens of humanitarian focal points to improve information collection and needs analysis to share with aid agencies and others when floods occur.

But much more needs to be done on the preparation front, according to Sufi. Last year IOM received 500,000 euros from the German government to respond to flood-affected people, and IOM wanted to extend these efforts to preparedness this year, but has not received any of the $1 million it requires to do so.

Activities include cleaning canals, repairing water pumping stations, training local officials, putting in place disaster contingency plans in at-risk areas and training field brigades who can respond rapidly to an emergency. “We shouldn’t wait for these problems to happen, we should be prepared,” said Sufi.

The government has invited engineers to propose possible infrastructure solutions for neighbourhoods that are perennially flood-prone, but no concrete projects are yet under way.

The Senegalese government has undertaken several flood action plans over the years, including rehousing families living on flood plains, and building reservoirs to contain flood-water, but many of its past programmes have stalled, and an urban population explosion means that as families are moved out of flood plains, others move in.

At the end of 2012 the government set up a Rainwater Management and Adaption to Climate Change Project (PROGEP) in partnership the World Bank. Through this project it aims to invest $132 million in flood management projects in 2013, reaching $1.4 billion over the course of 10 years. Since 2012 the Ministry of Restructuring and Management of Flood Zones has focused on short-term flood preparation, including clearing draining systems, ensuring pumping stations are working, and moving some families. It also plans to relocate 2,000 families living in high-risk areas, with the first relocation scheduled for 30 June.

To plan for an emergency response, the Senegalese Red Cross has been trying to raise awareness of proper hygiene to prevent water-borne diseases during the rainy season. It and the UN Children's Fund (UNICEF) have been stocking up and pre-positioning emergency supplies and hygiene kits to distribute when floods occur. Between them, these include jerry cans, soap, sleeping mats, mosquito nets, water-treatment chemicals and information cards on good hygiene practices.

Meanwhile, the UN inter-agency humanitarian country team is starting to prepare to respond with the Department of Civil Protection, according to OCHA.