As violence rages in northern Nigeria, and international peacekeepers gear up to keep the peace in northern Mali, fears abound that Islamist movements will spread across borders, stoking instability elsewhere in the region, including Senegal which is not immune to the spread of extremist rhetoric, argues a just-published report by the Institute of Security Studies (ISS).

Four Islamic brotherhoods dominate religious and political life in Senegal: the Qadiri, the Tijani, the Mouride, and the Layenne, each of them made up of leaders (or shaykhs) and followers (murids). In general, they are perceived as providing a barrier against the spread of fundamentalist dogma in the country, but the report says growing radical rhetoric is creeping in.

In the past, fundamentalists seeking to wield power in Senegal’s mosques pitted themselves against the brotherhoods, saying they needed to reform their form of Islam, said report author Bakary Sambe of the Centre of Religious Studies at the Université Gaston Berger de Saint Louis. But they soon realized this strategy would not work, and instead went for a strategic truce, he said, focusing on common causes such as a call to stamp out what they call "bad values" such as homosexulaity and the secular state.

Brotherhood  imams are increasingly asserting how “clean” and pure the form of Islam that they preach is, and thus they have taken on this reformist discourse, said Sambe.

According to the report/study, which involved researchers interviewing 400 Senegalese in the capital Dakar, its suburbs, and the towns and surrounding areas of Thiès, Mbour and Saint Louis, some 30 percent of interviewees said they had encountered the argument that they were not practising a true form of Islam.

Wahhabists (a conservative form of Sunni Islam) have allegedly criticized the brotherhoods for promoting the worship of individual imams - known in Senegal as marabouts - over worship of the Prophet Mohammed, said Sambe. In Thiès, for instance, many interviewees spoke of a mosque that did not support the right kind of Islam, and that worshipped men, over the faith.

“More and more, fundamentalist groups, such as Al Qaeda in the Islamic Maghreb [AQIM], are tapping into national causes and giving them a religious spin, to create national ideologies - that is part of their new strategy,” said an imam in the Dakar neighbourhood of SICAP Baobab, who preferred anonymity.

While the majority of mosques shy away from fundamentalist preaching, the rhetoric has become more extreme in a significant minority, he said.

Senegal sits at a sometimes uncomfortable crossroads: It is both an important African member of Islamic networks, and at the same time a traditional ally of the West.

According to the report, Senegal has inherited its former colonizer France’s secular governance structure, yet 95 percent of its inhabitants are Muslims, and they are increasingly voicing concerns about the way the country is being run. While the brotherhoods have great influence in determining who gets into power in Senegal, their impact is often greater in other areas. For instance, while 90 percent of Senegalese children attend non-religious state-run or private schools, many thousands attend Koranic schools, run by marabouts, with an unregulated curriculum, and in many cases unknown funders.

“The idea of strict secularism in a 95 percent Muslim country does not necessarily fit comfortably,” said Sambe. “Many see the French-educated elites who have led the country, as having failed… They want an Islamic alternative.”

Many youths - at least 40 percent of whom are estimated to be unemployed - feel they have been failed by a political system that cannot provide jobs, yet they are also disappointed with the brotherhoods, and thus seek a more modern version of Islam.

“We met youths who were determined; who were prepared to plant bombs if they were asked to… This is new here, and it’s serious,” said Sambe, adding: “The brotherhoods must adapt to attract more youths.”

Radical discourse can appeal to a minority of these youths, who want to join a cause and feel they have few alternatives, said the Dakar imam.

Of course, there is a big difference between pushing for a more fundamental form of Islam, and a moving towards practising violent Jihad: the two should not be conflated, said participants at an Open Society of West Africa (OSIWA)-hosted seminar to launch the ISS report.

Nevertheless, given Senegal is a neighbour of Mali, and given it has “structural, institutional and geopolitical vulnerabilities, it could become a target of reprisals by radical Islamists who have occupied northern Mali,” said Col Djibril Ba, ex-second-in-command at the National Gendarmerie, at the seminar. Since the start of the Mali crisis, Senegal’s security and defence forces have been running a security early warning system to avert any instability, he said.

The detonation of two car bombs on 23 May in Niger - one near a military barracks in Agadez, the other in Arlit, the site of a French-run uranium mine, reportedly instigated by militant leader Mokhtar Belmokhtar - has rattled security forces across the region. Senegal, like Niger, plays host to France’s economic, military and diplomatic interests, and is contributing troops to the International Support Mission to Mali (MISMA), which could make it vulnerable as a target, said Col Ba.

Riot police in Senegalese capital Dakar, during protests in the run-up to the 2012 presidential elections. 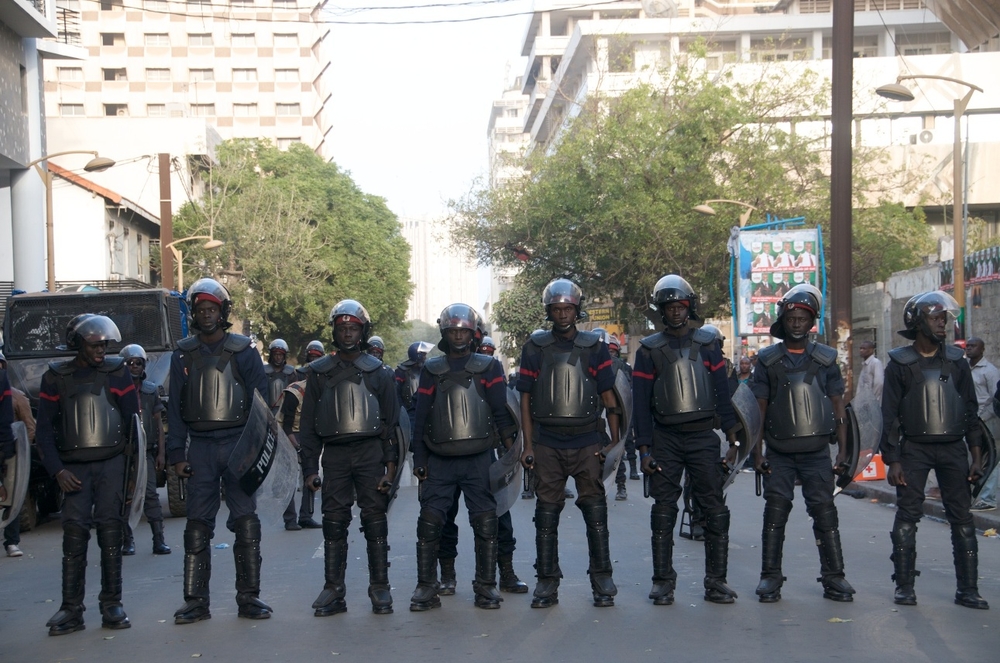 Senegal’s porous borders with its neighbours - Mauritania, Mali, Guinea, Guinea-Bissau and Gambia - and insufficient capacity and resources to sufficiently control these borders, create the conditions for trafficking and criminality of all sorts, including weapons, said Ba. “Even the USA, with countless highly sophisticated techniques and a newly erected border wall, cannot control its southern borders,” he said.

But not all are too concerned. Idrissa Diop, a researcher at the Ecole Normale in Dakar, reflected the views of many others IRIN spoke to. He is a Muslim and was seated beside his Christian friend and colleague from Kolda Region: “We live together here - he is my big brother, we share all our religious festivities. Religion should bring people together. The moment it starts separating people, there is something wrong. The kind of fundamentalism we see among certain groups in Mali could never be replicated here,” he told IRIN. “We wouldn’t tolerate it.”

ISS says more needs to be done to avert any trouble. It calls for an early warning security alert system to be set up, with religious groups, government ministries, security personnel and others involved to track and analyse incidents that occur.

It also calls on leaders to start a dialogue with religious leaders in Senegal to try to jointly limit the spread of extremist discourse in mosques and elsewhere.

The long-debated problem of how to better regulate what goes on in Koranic schools was debated at a Dakar seminar discussing the report’s findings.

Senegal’s police, military police (gendarmes) and army should work very closely together, exchanging information and intelligence on any security concerns, said Ba. The synergy between them needs to be improved both in Senegal, and among regional allies’ security and defence forces, he said.