Lul Mohamed, director of the paediatric ward at Banadir Hospital in the Somali capital, Mogadishu, treated five children after two bomb attacks killed 30 people on 14 April. "And they were shooting last night. One died, a bullet in his liver," she said of an eight-year-old boy.

Yet these are conditions of relative peace in Mogadishu. While the conflict is not over, insecurity has diminished since the withdrawal of insurgent group Al-Shabab in 2011. This relative security is allowing Mohamed to focus on preventative healthcare, a luxury she did not have two years ago.

In March 2013, she admitted 26 cases with measles, 19 with tuberculosis, 14 with tetanus and nine with meningitis. She is frustrated because all of these diseases are immunizable. Six of the children admitted that month died.

Mohamed hopes this year to immunize 1,000 children per month in the hospital's tiny but brightly painted vaccination room. Two volunteers sit at a desk, another monitors those coming in and out. They say they became volunteers when donors pulled out and staff were let go. By 1pm that day, they had vaccinated 28 children.

"A huge improvement in a short time - if peace holds," Mohamed said.

Coinciding with World Immunization Week, the Somali government announced on 24 April its intention to vaccinate all children under the age of one with a new five-in-one vaccine, known as a pentavalent vaccine, funded by the GAVI Alliance, with the UN Children's Fund (UNICEF) and the UN World Health Organization (WHO) as implementing partners.

"Children in Somalia are dying of diseases that are prevented in the rest of the world," said Maryam Qasim, the Minister of Development and Social Affairs, speaking at the vaccine’s launch. "Introducing this vaccine is a milestone in history."

President of Somalia Hassan Sheikh Mohamud also presided over the launch, showing unprecedented support for improving child and maternal health in Somalia, two of the eight UN Millennium Development Goals. He also announced that his government would consider co-financing the vaccination programme, as other countries do, in the future. 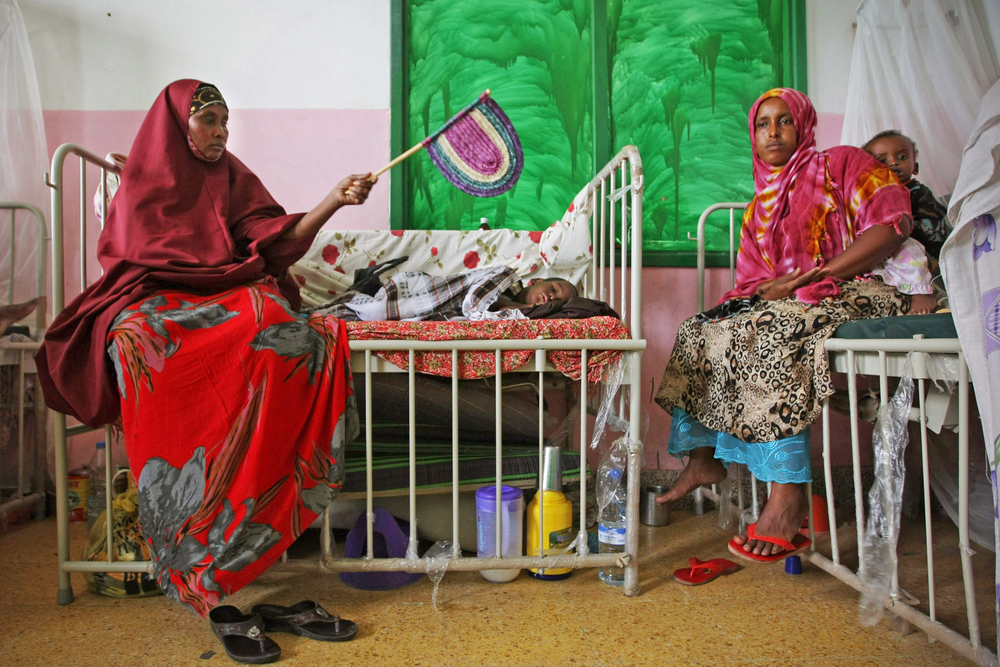 The pentavalent will protect immunized children against these three diseases, as well as heptatitis B and Haemophilius influenzae type b.

"Coming from such a low base, if we have system strengthening, we should see a huge improvement in a short time - if peace holds," Zeindl-Cronin said.

Eighteen months passed between country's decision to use the pentavalent and implementation of the programme, and Zeindl-Cronin recognizes that difficult tasks still lie ahead for GAVI's implementing partners. "It's easy to come here and put [the vaccines] in [a] fridge. It's getting them into the children that's the challenge."

There is not a great deal of infrastructure to rely on. Somalia has suffered close to 25 years of civil war. Its health system is fragmented, supported by an unregulated pharmaceutical industry and dominated by private practitioners who offer help only to those who can afford it. Private doctors in Somalia are earning up to US$10,000 per month.

A legal framework for healthcare is absent, and the federal state, which includes the semi-autonomous regions Somaliland and Puntland, raises questions about how any system might be structured.

"Normally, there is one food and drug administration. But where? Is it in Mogadishu? Or in each of the zones [south-central Somalia, Somaliland and Puntland]?" said Marthe Everard, WHO's representative for Somalia.

In addition to the systemic and infrastructural challenges of delivering healthcare in Somalia, large areas of the country are still controlled by Al-Shabab; others are inaccessible due to armed groups that have filled the vacuum left by Al-Shabab. Omar Saleh of WHO estimates that 30-40 percent of southern Somalia is accessible to external healthcare providers at any one time.

In his speech at the pentavalent launch, President Mohamud condemned Al-Shabab for blocking access: "In the certain areas they control, there have been no vaccinations at all in the past few years. Al-Shabab needs to understand that they are not only killing people through explosions, but every child that misses vaccinations they have practically killed."

The pentavalent vaccine launch is being accompanied by an awareness-raising campaign. Sikander Khan, UNICEF Somalia Representative, hopes that, once demand is created, the vaccine will reach women even in areas that Al-Shabab controls. "There is no parent in the world who doesn't care about the well-being of their child," he said.

Farhiyo Mohamed, who has six children, brought her youngest to an outpatient clinic in Benadir, Mogadishu, to receive the pentavalent at no cost. The mother says she visited the clinic when Al-Shabab was still in the city, but that it was dangerous to do so. "Al-Shabab would question you when you came back. Today, we are happy," she said.

While prospects are improving, inequitable access remains a major challenge. Paediatrician Mohamed, at Benadir Hospital, calls for a three-pronged commitment, not only from the government, but also the community and health workers. She says motivating and engaging private and public sector workers is critical to improving the reach of healthcare, and the reach of vaccines in particular.