The search for the Ugandan rebel group the Lord's Resistance Army (LRA) in the rainforests of the Central African Republic (CAR) will continue despite the ouster of President François Bozizé by rebel group Séléka, officials say.

Séléka overran the capital, Bangui, on 24 March, putting Bozizé to flight. The rebels named their leader, Michel Djotodjia, the new head of state.

“I don’t think the overthrow of President Bozizé by Séléka will change our mission and position in the hunt down of LRA rebels. We are in CAR with the mandate from [the] AU [African Union] and UN [United Nations],” Uganda’s state minister for international relations, Henry Okello Oryem, told IRIN, adding that his country is committed to capturing LRA leader Joseph Kony.

Uganda has some 2,500 soldiers deployed around the border areas of CAR, the Democratic Republic of Congo (DRC) and South Sudan, where Kony and his fighters are thought to spend most of their time. The Ugandan troops are joined by 500 Congolese fighters, 500 South Sudanese and 350 CAR troops, all operating under the auspices of the AU. In late 2011, the US deployed 100 special forces to the region as military advisers to the effort.

According to Thierry Vircoulon, Central Africa project director for the think tank International Crisis Group (ICG), “the fall of Bozizé will not change much the situation on the ground, except if the Séléka leaders insist on the departure of the foreign troops as stipulated in the Libreville agreement [a peace agreement brokered in January and breached by the latest fighting? but never successfully implemented].”

Some analysts say, however, that the AU’s decision to suspend CAR from the organization following the coup could have negative consequences for the hunt for the LRA.

“The AU’s suspension of CAR poses a great challenge and will slow down the hunt for Kony and his rebels. Uganda has to re-negotiate with Séléka rebels… in order for its troops to have the mandate to operate in their territory,” Ronald Ssekandi, a regional political analyst based in the Ugandan capital, Kampala, told IRIN.

Angelo Izama, a political affairs analyst at the US-based Open Society Foundation, said the hunt for Kony and the LRA would largely depend on Séléka’s control of the country.

“The deterioration of government in CAR is a significant complication for the hunt against Joseph Kony. The LRA's asymmetrical, low-tech survival strategy thrives in conditions of lawlessness and violence, especially in the hinterland,” he told IRIN.

The ruins of a house that was torched by LRA fighters in Nguili-Nguili village, 12 kilometres from the town of Obo 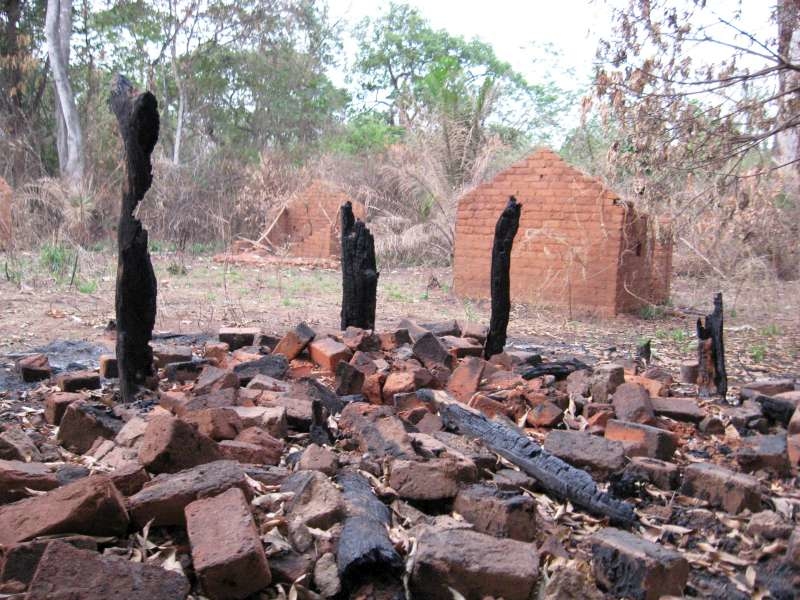 “Already the geographical terrain, as well as the size of CAR, has been a practical constraint against the forces hunting Kony. If Séléka is unable to consolidate control, it would further the physical and tactical net within which LRA can seek opportunities to rebuild weapons caches,” he added. “The Séléka rebels do not have the capacity [to limit LRA activities]… In addition, Kony is not their problem; there are much more important emergencies to deal with.”

According to Lt Gen Edward Katumba Wamala, commander of the Uganda People’s Defence Forces’ (UPDF) Land Forces, Kony’s fighters currently number about 400, and they continue to roam around CAR, DRC, Sudan and South Sudan. He said some LRA defectors recently reported that Kony was in Sudan’s western region of Darfur, while his senior commanders, Dominic Ongwen and Okot Odhiambo, are thought to be in CAR.

Kony, Odhiambo and Ongwen are wanted by the International Criminal Court (ICC) for alleged war crimes and crimes against humanity committed in Uganda.

“The LRA no longer pose a big threat, but there are still [a] few pockets of LRA rebels operating in CAR under Odhiambo and Ongwen. They are a nuisance. They have continued to abduct, maim and kill unarmed people,” Katumba told IRIN.

“It is important to recall that, despite [the] relatively small number of remaining elements, the LRA continues to pose a serious threat to civilians, with dire humanitarian consequences, in the affected areas in CAR, DRC and South Sudan,” Abou Moussa, head of the UN Regional Office for Central Africa (UNOCA), told IRIN via email.

In February, the UN Office for the Coordination of Humanitarian Affairs reported that in the country’s southeast, “there has been an increase in the LRA attacks against communities and hostages being taken.”

According to LRA Crisis Tracker, the LRA was responsible for 13 civilian deaths and 17 abductions in CAR February 2013. UNOCA says an estimated 443,000 people are currently displaced in LRA-affected areas, many of them depending on international assistance for food, shelter, health care, water and sanitation. This includes an estimated 347,000 people in Province Orientale’s Haut-Uélé and Bas-Uélé districts in DRC.

Fatou Bensouda, the ICC’s chief prosecutor, recently sent a message to the LRA, assuring them that, should they be arrested, they would not be “tortured or killed” and would receive a fair trial.

Commitment to the cause

Analysts say if the LRA threat is to be laid to rest once and for all, countries in the region must show more commitment to finding Kony.

“It requires committed governments to arrest Kony. The ICC can only base its optimism in this practical possibility. There is no government in CAR, soft states in South Sudan and Chad, and support for LRA from Sudan. It’s plausible that the situation above favours the LRA and not the ICC,” said Open Society Foundation’s Izama.

“Kony's continued existence, and that of his entire group, is part of a much larger problem in the Great Lakes region: failure by governments to resolve internal political problems and to work together in a concerted way to bring to an end cross-border insurgencies in the region,” said Frederick Golooba-Mutebi, a political scientist and senior research fellow at Makerere University’s Institute of Social Research. “Their proliferation points to the existence of problems or grievances that ought to be addressed - questions to do with citizenship and nationality, land ownership, access to services and opportunity.”