The process of integrating armed groups into the Democratic Republic of Congo’s (DRC) army, FARDC, has stalled again amid heavy fighting at a base where hundreds of combatants had assembled.

The clashes, which started in Kitchanga, North Kivu Province, could jeopardize community reconciliation across much of the province's Masisi territory, which saw outbreaks of ethnic violence in 2012.

In this briefing, IRIN looks at armed group integration and community pacification in eastern DRC and asks how these processes might develop in Masisi and elsewhere in the region.

What has happened in Kitchanga?

Heavy fighting broke out on 24 February between FARDC and the Alliance of Patriots for a Free and Sovereign Congo (APCLS) militia, and continued until 27 February. It broke out again on March 3; as of 5 March, at least 70 people had been killed and thousands displaced from their homes.

Between 500 and 700 APCLS combatants are believed to have been in Kitchanga, alongside a regiment of about 1,000 FARDC soldiers. The combatants had been sent by their commander, Janvier Bwingo Karairi, who was negotiating with the army over the possible integration of his forces.

UN Radio says discussions broke down over the murder of an APCLS officer and attempts by the APCLS to attack ethnic Tutsi living in a displacement camp, who they alleged were hiding weapons. A witness to the fighting, Samson Ndako, said many houses in Kitchanga were burned as the fighters targeted each other's communities. The APCLS are largely ethnic Hunde, and many soldiers in the town are Hutu or Tutsi.

Most of the town’s estimated 120,000 inhabitants have fled towards Tongo in the northwest.

Why are these latest clashes significant?

There is fighting between the FARDC and armed groups in many parts of DRC, but Masisi is a key area for political and strategic reasons. Tensions within this densely populated territory have repeatedly sparked or fuelled wars.

The area straddles an ethnic fault line between Banyarwanda people, who have Rwandan ancestry and include the Hutu and Tutsi, and other so-called “indigenous” communities, such as the Hunde, Nyanga, Tembo and Nande.

In 2012, the violence in Masisi was worse than at any time since the 1990s, contributing to the displacement of up to half a million people in North Kivu.

That violence died down in December, when Hutu, Hunde and other armed groups agreed to a ceasefire. There was even a plan for APCLS’s Janvier to take command of other armed groups and shepherd them into a mass integration into the army. That idea may now be shelved or abandoned.

Masisi is also at the frontline of the stand-off with the M23 rebels, who control most the neighbouring territory of Rutshuru.

What is the risk of a return to ethnic violence in Masisi?

The fighting in Kitchanga is not simply Hunde versus Hutu and Tutsi. Oxfam worker Eddy Mbuyi told IRIN that elements of the Rwandan, Hutu-dominated rebel Democratic Forces for the Liberation of Rwanda(FDLR) have been siding with the APCLS, and other local Hutu militias appear to be neutral. Still, he said, there is virtually an ethnic war in Kitchanga, and it threatens to spread.

Yet progress towards reconciling Hutu, Hunde and other communities has been made in recent months. Since December 2012, at least three large pacification meetings have been held in the territory. The Jesuit Refugee Service described a meeting on 5 February at Masisi Centre as "historic" - it was the first time hundreds of Hunde and Hutu combatants had met at such a gathering.

The leaders of the APCLS and of the Hutu Force for the Defence of Human Rights (FDDH) militias were present at that meeting, and in an apparently strong gesture of solidarity, FDDH coordinator Emmanuel Munyariba said the FDDH would take orders from APCLS's Janvier.

However, that solidarity may have been conditional on good relations with the army (Munyamariba is also a local police chief), and the FDDH is not the only Hutu militia, nor is it united - three groups call themselves FDDH. In a recent Rift Valley Institute report, Congo expert Jason Stearns referred to 15 mostly Hutu splinter militias in the neighbouring territory of Kalehe.

Destruction caused by an attack on the village of Mashaki in Masisi territory, DRC 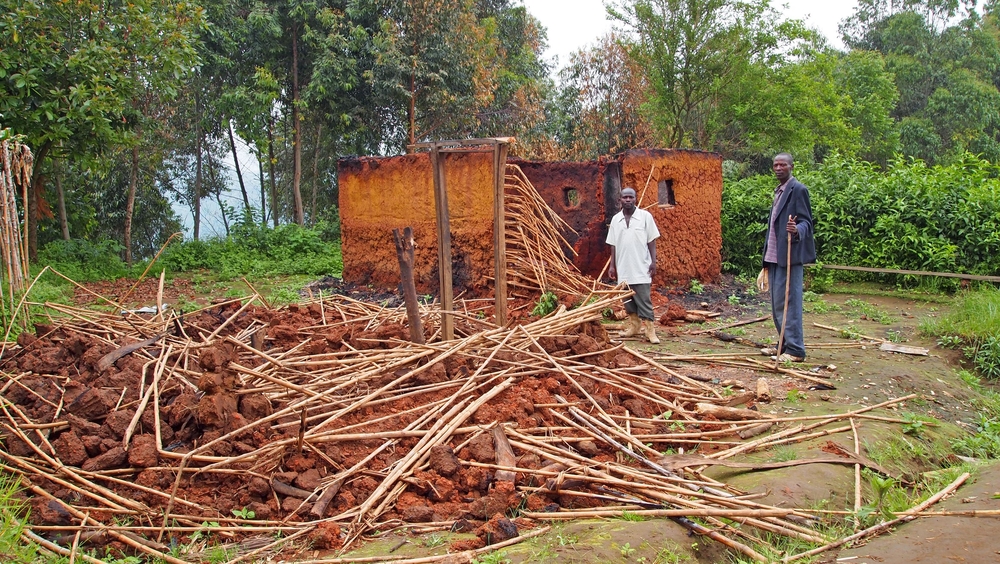 Reconciliation has a long way to go in the villages. The NGO Concern found some villages in Masisi still empty, and many formerly ethnically mixed villages are now inhabited by only one ethnic group. Forty-five percent of the villagers Concern interviewed said they had only just returned after fleeing the recent violence, and many remain displaced.

Notably absent from pacification meetings were representatives of the Tutsi community. The research head for the North Kivu Civil Society Association, Djento Maundu, said this was a major reason some community chiefs have not attended the meetings.

There is a serious risk of armed groups banding together against the Tutsi, who are widely blamed for the M23 rebellion although many Tutsi have died fighting alongside the rebels. Most of the M23's senior officers are Tutsi, as are many generals in FARDC who were integrated into the army after fighting for Rwandan-backed rebel movements.

Some complain that past peace agreements have given the Tutsi too much power, and that they are using it to defend their large land holdings and dominant role in the economy.

Hunde elder and APCLS spokesman Kingi Mbayo told IRIN on March 4 that the APCLS is not against the Tutsi, and has some Tutsi in its ranks, including “Colonel” Philemon. He also said Tutsi ranches have not come under attack in the past year, which appears to be true.

But he added that many Tutsi who claim to be Congolese refugees, whose return to their land is one of the M23’s demands, are not genuine Congolese, and called for more pressure on the Congolese and Rwandan governments to address this issue.

APCLS spokesman Jannot Makale Kale told IRIN on 4 March that the group would not leave Kitchanga but was willing to coexist there with FARDC, which it still regards as its ally.

Where has this left the army integration process?

In 2012, the UN Stabilization Mission in DRC (MONUSCO) reported that there were at least 31 armed groups in eastern DRC. The only large militia to integrate into the army since 2009 was the Hutu Nyatura, a group of around 1,000 fighters, now known as the Tango Four regiment. MONUSCO has a list of 12 groups in North Kivu that have been in integration talks.

MONUSCO lists nine of the armed groups in North Kivu as pro-FARDC and only four as pro-M23. But the list considers APCLS a pro-FARDC group, so it may need updating. Even so, the APCLS's hostility to the Tutsi means an alliance with the M23 is unlikely.

The M23 is believed to include some 3,000 fighters, while the Congolese army may have deployed some 20,000 against them. The other armed groups in North Kivu cumulatively have several thousand fighters.

Without significant armed support, the M23 will have difficulty advancing far from the Rwandan border. The proposed deployment of drones to monitor the border will put them under further pressure.

The M23 also has serious internal divisions. Two M23 factions, one led by Bosco Ntaganda and the other by Sultani Makenga, were fighting at the end of last month, allowing FARDC and allies to move into the M23 zone before withdrawing again on March 3.

The armed groups that MONUSCO lists as pro-M23 are generally smaller than the pro-FARDC groups, so the odds seemed to be stacked against the movement. By June, it could also be facing a possible reinforcement of MONUSCO – which has some 17,000 peacekeepers - by a South African Development Community-led neutral international force of up to 4,000 soldiers with a more robust mandate.

Where next for integration and pacification?

Spokesmen for armed groups like the APCLS, FDDH and Movement of Action for Change (MAC) have told IRIN that the reason they have not yet joined the army is because it has been infiltrated by the M23. There is widespread suspicion that Tutsi officers within FARDC are M23 sympathizers, and militia members will be reluctant to join the army if they think the senior ranks are dominated by a hostile community.

Meanwhile, government negotiations with the M23 have been ongoing since December. The government is trying to avoid reintegrating senior M23 officers; it has offered to reintegrate all ranks up to major and to treat colonels and above on a case-by-case basis, offering some of them “retirement packages”. MONUSCO supports this position.

If a deal is reached with the M23, the army might try to deal with the region’s other armed groups by force, with the help of MONUSCO. A military source said the SADC-led troops would probably conduct some operations against the FDLR, some of whose core leadership was involved in the 1994 Rwandan genocide.

In a letter published on 12 February, 19 mostly international NGOs called for "non-military solutions to [the] conflict… based on the failure so far of military action to fully address the presence of non-state armed groups and the negative impact of such action on the civilian population".

But militia commanders' ambitions may not be limited to integration in the army. For instance, the territory of APCLS's Janvier's is rich in high-grade cassiterite, which has been largely unexploited.

Researcher Maundu suggests that a key to peace could be establishing which people are the real stakeholders in the mines, and then encouraging the mines’ exploitation by demobilized militias.