Over the past two months, an estimated 1,000 families have been forced from their homes in Baringo, a district in Kenya’s northern Rift Valley, because of recurrent conflict between the local Tugen and Pokot communities.

Residents blame the escalating conflict on politics ahead of the 4 March general elections.

“The politicians want to become popular by sending us away so that they can expand their supporters’ grazing land,” Michael Kandie, an ethnic Tugen, told IRIN in the Sibilo area. “By arming the Pokot to steal our livestock, the politicians are assured of winning in the forthcoming elections.”

The Pokot blame the Tugen, and an insufficient government presence in the region, for the violence.

Joseph Todokin, an East Pokot resident, said, "The police have lost the battle. They are scared, [and] gangs of bandits roaming in Baringo, Pokot and Turkana are very confident. They know the police are few in number. They are bolder and can now kill the police at will."

In November 2012, at least 40 police officers were killed in a botched operation to recover stolen livestock along the Suguta Valley, in the northern Rift Valley area of Baragoi, exemplifying the security challenges there.

In Baringo, the violence is being carried out by young men who seem to have received training, according to a recent report by the National Council of Churches in Kenya (NCCK), the Internal Displacement Policy and Advocacy Centre (IDPAC) and the Peace Corps.

“Raiders appear well coordinated and are reasonably trained, assuming formations similar to police and military manoeuvres during raids,” it states.

Government officials deny the involvement of security officials in training these groups.

“Late last year, we had army officers training here. The rustlers could have observed [them] from a distance, practiced and perfected their manoeuvres,” Daniel Kirui, the Baringo East district commissioner, told IRIN.

Kirui attributed some of the violence to political incitement over disputed administrative boundaries. “This is a major cause of the recurrent conflict and cattle rustling.”

"Garissa has suffered the worst and highest number of grenade [and] gun attacks. Civilians, policemen and military forces have been killed. This town is the most dangerous place in Kenya. Nobody is safe."

Kenya’s new devolutionary constitution has raised the political stakes in the neglected northern regions considerably by promising real political and budgetary power at the county level.

Peace talks have been unsuccessful.

“Every time we meet as elders and agree to keep peace, politicians re-incite the youth, and we are pushed further away, and our animals stolen,” Stanley Rottok, a Tugen elder, told IRIN, adding that many people will be unable to vote in the 4 March elections as a result of their displacement.

“If the government gets serious, there would be peace and co-existence among all pastoralist communities, but for now, we remain neglected and rejected.”

The NCCK/IDPAC/Peace Corps report urged the government to put in place measures to prevent further violence; it also recommended revamping the education sector there to boost basic literacy.

“But peace and protection remains our most basic needs,” said Rottok.

The Kenya Red Cross Society’s (KRCS) has distributed food to the displaced families and is providing free medical care. Malaria, upper respiratory infections and waterborne diseases are the most common illnesses being reported.

Some of the displaced are sleeping out in the open, while others are staying with host families or in KRCS tents.

According to John Lokaala, KRCS Rift Valley logistics officer, there is a need to construct pit latrines to stem the spread of diseases. “They also need non-food items like mosquito nets, blankets, utensils and others.”

At least 12 schools in the area have also been shut down, with some teachers fleeing insecurity.

“It is unfortunate to see children fail to attend school due to human-caused conflict, especially [in] an area where literacy levels are already wanting,” added Lokaala.

The violence has also led to the closure of the main Ngiyang livestock market there.

"We ask the government to urgently open the Ngiyang market. Many people have lost their work [and] source of food. The closure is creating more problems and poverty,” Pepe Kitamba, an ethnic Pokot, told IRIN.

Turkana youths in northern Kenya, near the Sudanese border. Small arms such as the AK-47 are widespread among pastoralist communities in east Africa, where increasingly severe and unpredictable drought has contributed to an increase in conflict between d 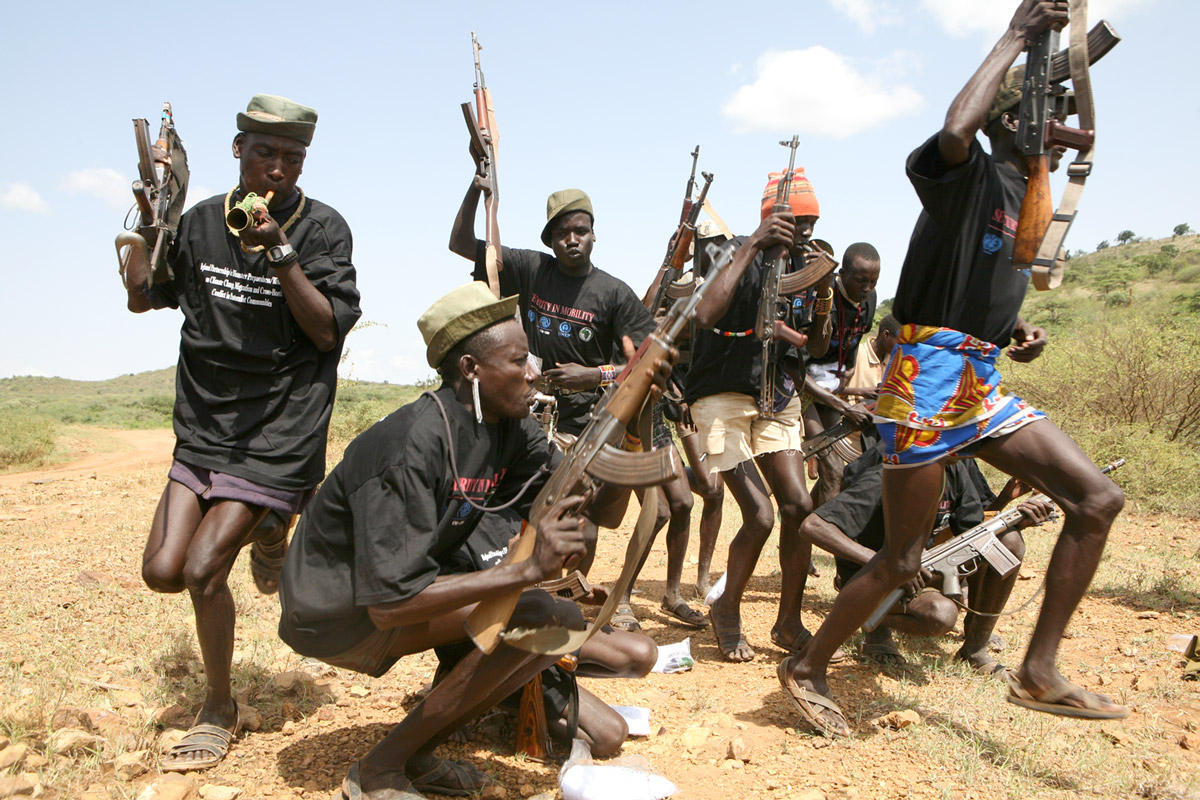 According to Joshua Onyango, the Baringo North district commissioner, “Finding a solution is hard and slow.”

Police officers from the anti-stock theft unit have so far been deployed to hot spots in the region such as Loruk, Chemoi, Kapturo and Chepkesir, added Onyango.

The Independent Elections and Boundaries Commission is also expected to help to address boundary disputes in the Baringo and Pokot administrative areas.

Garissa, in Kenya’s North Eastern Province, is also experiencing a rise in insecurity due to the activities of armed gangs.

According to Osman*, a civil servant in Garissa, residents are living in fear.

"Last week, a police sergeant was shot dead in public. A day earlier, a military personnel died in a grenade attack in [neighbouring] Wajir. Two policemen were [also] injured in the attack close to the police station. They [gangs] are targeting security officers right in the towns. This is worrying," said Osman.

Abdi Haji, another Garissa-based civil servant, told IRIN that insecurity had worsened despite the massive deployment of security forces there. A number of attacks have taken place in the area since Kenya invaded Somalia in 2011. The attacks are often attributed to sympathizers of the Somali insurgent militia Al-Shabab.

"Garissa has suffered the worst and highest number of grenade [and] gun attacks. Civilians, policemen and military forces have been killed. This town is the most dangerous place in Kenya. Nobody is safe."

Mistrust between the public and the police contributes to the problem.

"We are afraid. In case you report these guys, you will find them back in the streets. Two people at Bulla Iftin [Village] have been killed after they allegedly submitted the names of the suspects who had attacked police posts and police on patrol. It’s a clear case of corruption," said a resident of Bulla Iftin, on the outskirts of Garissa town.

Residents have threatened to arm youths to retaliate against the killer gangs. "We know them [gang members]. Two are retired military officers, some were police officers, while a few were formerly bandits. Their financiers are wealthy traders and Somalia’s Al-Shabab group," said a resident who preferred anonymity.

A member of the area’s Islamic Council of Imams and Preachers, Sheikh Muhumed, said, "Those people who are committing these crimes are known. They have been reported to the police, but it’s strange not even a single arrest or conviction has been made after all the killings and attacks."

According to Garissa County Commissioner Maalim Mohamed, 100 police reservists are being recruited to help the regular police. However, he stressed that unless local communities actively participate, efforts to curb the violence would be futile.

"Let the truth be told, these criminals are being harboured by our people. We can only win this fight with their help," he told IRIN.