Reprieve for urban refugees in Kenya, but fear persists 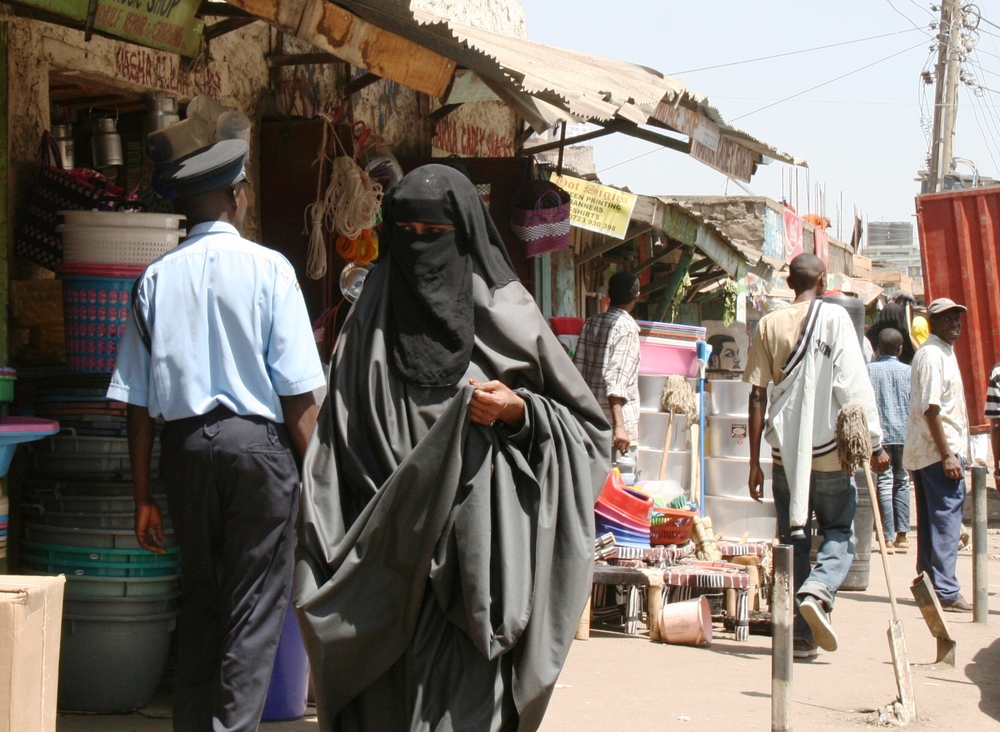 NAIROBI, 24 January 2013 (IRIN) - Urban refugees in Kenya, threated with relocation to overcrowded refugee camps, are breathing a sigh of relief following a High Court ruling that has provisionally halted the move.

On 18 December 2012, Kenya's Department of Refugee Affairs announced that all refugees should leave urban areas and move to refugee camps - the northeastern Dadaab complex for Somali refugees, and the northwestern Kakuma camp for all others. It further ordered an immediate stop to the registration of refugees in urban areas.

The directive was in response to a number of grenade attacks that have occurred in urban areas, follwoing Kenya's invasion of Somalia in October 2011. The attacks have been widely blamed on the Somali militant group Al-Shabab, although the group has not claimed responsibility.

The government was due to begin the relocation of an estimated 100,000 urban refugees to camps on 21 January, but a ruling on 23 January by Justice David Majanja halted the government's plan until 4 February, when a petition against the directive filed by Kituo Cha Sheria, a local legal rights group, is scheduled to be heard.

"I am satisfied that, in view of the international obligations Kenya has with respect to refugees, and the fact that under our Constitution refugees are vulnerable persons, the petitioner has an arguable case before the court, " the ruling stated. "A conservatory order... is hereby issued prohibiting any State officer [or] public officer agent of the Government from implementing the decision evidenced by and/or contained in the Press Release dated 18th December 2012 pending further orders of this court."

Defenders of refugee rights have welcomed the judge's decision. "This is a very positive ruling by the court. We hope it will be widely spread and reduce the fear the refugee community has experienced since the December announcement," Melanie Teff, a senior advocate with the NGO Refugees International (RI), told IRIN. "Of course, a lot of harm has already been done since the press release, and many urban refugees have already fled."

Fatuma Diriye lived in Nairobi's Somali-dominated Eastleigh neighbourhood for over five years. There, she ran a small business and sent money and supplies to her children in Dadaab. She recently moved back to Dadaab after the directive and police harassment.

"The police attacked my business several times. I had to pay them some money to stay safe from the harassment," she told IRIN, adding that she feels helpless now that she is totally dependent on aid for her family's needs.

"Here is where our children call home... The government has put us in a condition of fear, and we can't even move out of our houses. We are lacking freedom of movement. We don't open our businesses"

For many refugees, the journey to from Nairobi to Dadaab is a treacherous one; Jelle Ibrahim, a father of six in Dadaab's Hagadera camp, said he had to go through five different police check-points along the way.

"We were asked to bring identification cards - when I showed my travelling document, they put us in a separate place [for questioning]," he said. "We were harassed until the conductor of the bus intervened and paid some money to the police."

Dadaab refugee complex, originally built to house 90,000 refugees, currently hosts an estimated 500,000 Somali nationals. An influx of refugees from Kenya's towns and cities would have a serious impact on the ability of aid agencies and the government to provide services.

"Dadaab is overcrowded and under-resourced - its population has risen by about 150,000 in the last year, while funding has reduced by about half," Mark Yarnell, Horn of Africa advocate for RI, told IRIN. "Insecurity remains a major issue in Dadaab, and some refugees are actually returning to Somalia for this reason."

Officials in Dadaab say they have not yet seen a significant rise in refugee arrivals from urban areas, but fear they would struggle to cope if they did.

"The number of refugees arriving from Nairobi appears small. For the time being, it does not have any impact on service delivery or life in the camp. This can, of course, change if more refugees arrive," said Mans Nyberg, senior external relations officer in Dadaab for the UN Refugee Agency (UNHCR).

"We encourage all new arrivals to reactivate their refugee cards so that they will get the benefits they are entitled to as refugees," he added.

Refugees remaining in Eastleigh and other urban centres have expressed relief that the directive will not take place immediately, but said they continue to live in fear of police harassment.

"For now, we are happy from what we have heard and that the government is not implementing their directives soon... We can't go back to camps because even refugees residing in the camps have their problems. Food, water, health and even space to settle is a problem due to the number of refugee in Dadaab," said Ubah Hussein, who lives in Eastleigh. "We would like to go back to our country, but still there is no firm security and peace in most places."

"Here is where our children call home... The government has put us in a condition of fear, and we can't even move out of our houses. We are lacking freedom of movement. We don't open our businesses," said Abdi Mohamed, an elderly businessman in Eastleigh. "Some of my neighbours have left for Mogadishu, and others are on course if the government directives persist."

Temporary homes at Dagehaley camp, one of three camps that make up the Dadaab refugee camp in north eastern Kenya 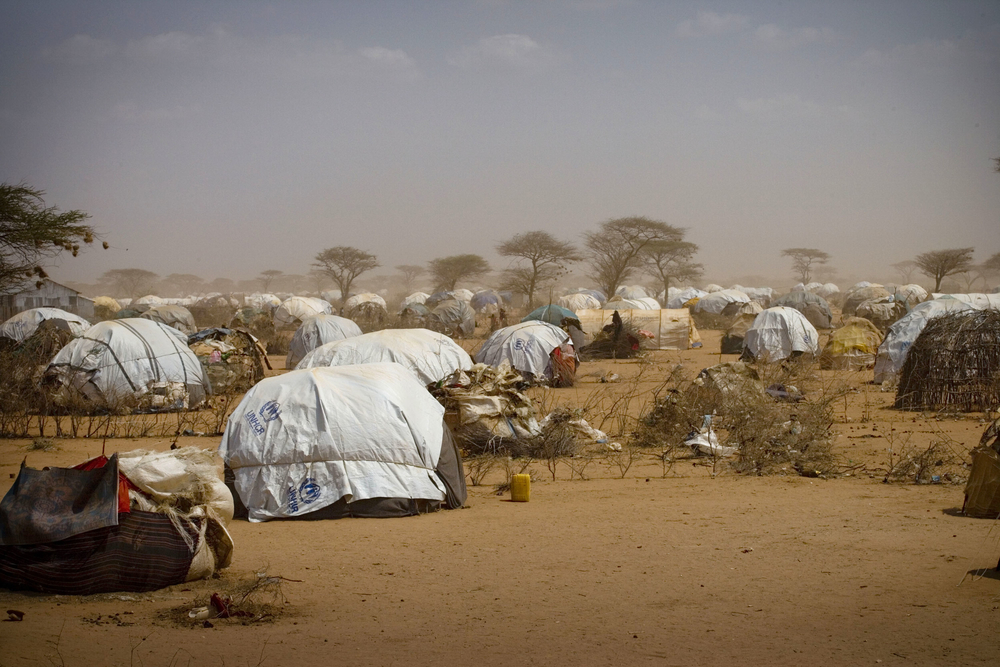 RI's Yarnell said he had met with community leaders in Nairobi who had expressed fear of police harassment and feelings of helplessness.

Eric Kirathe, Kenya's police spokesman, told IRIN that extortion by police officers would not be tolerated and advised refugees to report any such incidents. "Cases of harassment and extortion are very unfortunate. There are channels for reporting - from the Kenya Anti-Corruption Commission to police headquarters to the Independent Police Oversight Authority... Reporting to the media or talking about it in an ad hoc way won't get results," he said.

Rights groups say the harassment of refugees - and Somalis in particular - is not limited to security forces, but also exists within wider Kenyan society. Rufus Karanja, a programme officer with the Refugee Consortium of Kenya, said there was growing concern about the safety of refugees in the run-up to the country's 4 March general election.

"In 2007, many refugees were victims of general xenophobia and insecurity, and many were displaced. We are trying to come up with contingency plans for them ahead of the coming election," he told IRIN. "Much of the xenophobia is fuelled by the media, who keep linking the attacks to Somali refugees... There is a need for media sensitization on broad aspects of refugee protection."

A number of civil society groups, under the umbrella of the Urban Refugee Protection Network, on 22 January called on the Kenyan government to end the abuse of refugees that had escalated following the 18 December directive.

"We will continue to pursue, through the courts, reports of extortion, arbitrary arrest and unlawful detention of refugees by security forces," Karanja said.