Indonesian health officials have downplayed concerns over a fresh outbreak of avian influenza which has killed some 160,000 reared ducks since September 2012.

“So far no Indonesians have been infected by the new clade [virus group] of the H5N1 virus,” Tjandra Yoga Aditama, the director of disease control and public health at the Health Ministry, told IRIN.

“The outbreak has only affected ducks. There have been no known cases in humans,” said Muhammad Azhar, coordinator of the Avian Influenza Disease Control Unit. "We have taken necessary measures to control the outbreak."

More than a dozen subsets of the H5N1 virus have been identified - with numerous variants within each clade. Although new to Indonesia, clade 2.3.2 H5N1 has been circulating across Asia for several years, say experts.

Most poultry kept by Indonesians are chickens; only a small minority keep ducks.

“The origin of the infection was apparently uncertified imported ducks,” said Emil Agustiono, head of the National Commission on Zoonosis. “But luckily we have discovered the vaccine [for poultry] and will start production in February. For now we’re using the old vaccine and it’s still effective.”

The government needs at least another 25 million doses of the H5N1 clade 2.3.2 vaccine, and will compensate farmers affected by the outbreak, though the amount of compensation has not been decided, he added.

The Health Ministry’s Aditama said many countries had reported the presence of clade 2.3 and there had been eight known bird flu cases in humans caused by the strain - three in Bangladesh and five in China.

“So far Indonesia has not seen infection from ducks to humans or bird flu cases in humans caused by clade 2.3, but I expect that generally the medium of infection is similar to that of clade 2.1,” he said.

Health officials have advised that control activities in humans had not changed with the new clade, he said.

“Data on antiviral sensitivity is limited from the human cases, but there is no reason to expect a change.”

In response to the outbreak, Agustiono said the government was strengthening surveillance and tightening the movement of poultry between provinces to stem the outbreak.

A poultry worker disposes of a dead chicken in Dhaka, the Bangladeshi capital. The country has witnessed an increased incidence of the deadly bird flu virus thoughout the country. 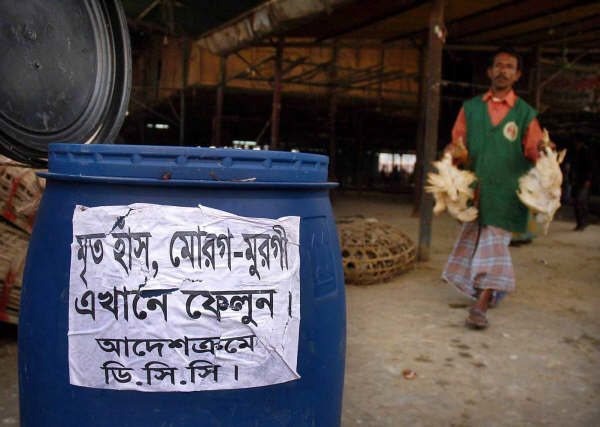 “The spread of the virus is epidemiologically controllable and we’re doing what we can to stop it,” he said, adding: “This outbreak has disrupted the animal husbandry sector and more importantly, is a public health issue.”

Indonesia stopped importing poultry from Australia in December following a bird flu outbreak there, he said. However, there has been no ban on imports of certified ducks from other countries.

About 60 million Indonesians keep poultry, including ducks, in their homesteads. Indonesia’s animal husbandry sector is worth US$2 billion, government statistics show.

Agriculture Minister Suswono, who like many Indonesians goes by only one name, said the outbreak was not yet an emergency.

“According to our data, 160,000 ducks have died and compared to the population of 50 million reared ducks that’s a small number,” he told reporters.

Humans in Indonesia have been more affected by avian influenza than in any other country: Of the 189 confirmed bird flu cases since 2005, 157 were fatal.

On 20 December, the World Health Organization (WHO) said sporadic human cases reported that month in countries with known H5N1 virus activity in poultry were within the expected range.

“No onward sustained human-to-human transmission was reported,” it said.

Since the H5N1 virus first appeared in 2003, there have been 610 laboratory-confirmed human cases globally - 363 of them fatal – with Indonesia seeing the largest number of deaths, according to WHO.

Globally, H5N1 has killed or forced the culling of more than 400 million domestic chickens and ducks, and caused an estimated $20 billion of economic damage. It was eliminated from most of the 63 countries infected at its peak in 2006, the UN Food and Agriculture Organization reports.