Almost a week into its current crisis, humanitarian attention in Kenya began this weekend to focus on people living in slums, especially those in the capital, Nairobi.

The majority of the city’s inhabitants live in its sprawling slums and it is this impoverished population, together with tens of thousands of displaced people in western Kenya, that has borne the brunt of the violence and disruption unleashed in the wake of the 27 December presidential and parliamentary elections.

On 5 January, numerous UN agencies, NGOs and church groups met to plan how best to tackle the humanitarian problems in these slums, where, even at the best of times, most residents live from day to day, surviving thanks to casual labour or the smallest of retail businesses.

“More than two million people live in slums in Nairobi. All have been affected in one way or another,” Ingrid Munro, the managing trustee of JamiiBora Trust, a microfinance organisation with 175,000 members across Kenya, told IRIN on the fringes of the meeting.

“The most immediate need is food. Even those with money can’t buy it because all the stalls are closed or burnt,” she added.

The 30 December declaration - under circumstances that led the opposition to cry fraud and the international community to express grave concern about vote-count irregularities - that incumbent Mwai Kibaki had been re-elected ignited long-standing ethnic tensions and led to the targetting of specific ethnic groups.

There have been widespread physical attacks and even killings, and countless cases of arson and looting. Gangs of young men roam the slums and their peripheries demanding to see people’s identity papers so as to identify their ethnicity.

“There have been serious losses in small businesses. Also taking into account this holiday season, many poor families have had no business for two weeks. That is a huge loss. It’s a loss of daily livelihood,” said Munro.

“It’s heartbreaking to see businesspeople turned into beggars. What they have spent years building up has been wiped out in a week,” she added.

Internally displaced people seek shelter at Jamhuri Park, Kenya. January 2008. Majority of people have been displaced following the post election violence that has been rampant in most parts of Kenya. 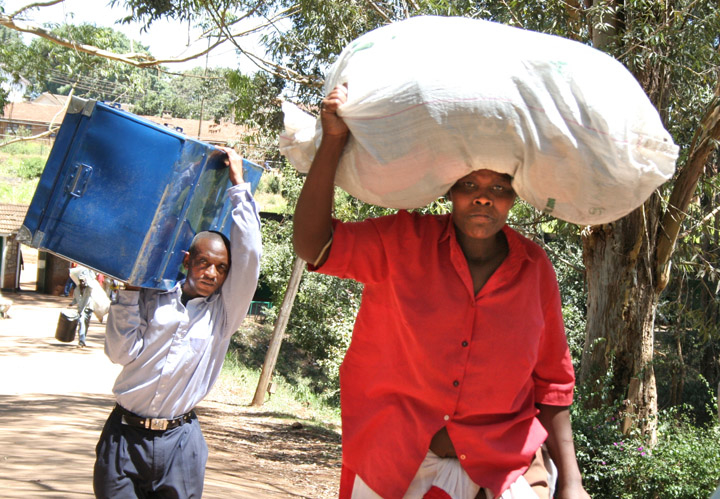 Another aid worker with many years’ experience in Kenya who asked not to be named, estimated the number of “desperate” slum-dwellers in Nairobi at hundreds of thousands. “It’s not only food they need, but also shelter and clothes.” Before this crisis, “they got by thanks to casual work and social programmes. These are not operating now,” he said, warning that unless food was supplied very soon, a major law and order problem would arise. “When people get desperate, they’ll do anything. There are plenty of people ready to sell weapons,” he said.

The World Food Programme has considerable supplies in Kenya because it serves as hub for humanitarian operations in other countries in the region and for refugees from these countries living in camps in Kenya. The challenge is getting it to where it’s needed.

There was consensus, aid workers said, that simply delivering large quantities of food in the middle of slums such as Kibera, Mathare, Kangemi or Karangware was not an option. Access remains problematic because of insecurity. UN personnel are required to comply with security procedures which complicate and in some cases prevent their entering the slums.

And with so many people hungry in so many different parts of the city, taking a truckload of food into, say, Kibera, would very likely cause a riot.

According to Michael Morrison, emergency relief coordinator and programme manager with Feed the Children (FTC), at the level of the individual beneficiary, only small quantities of food should be provided. “You can’t give people two months’ worth of food in such places. They will have nowhere to store it and it’s likely to get looted,” he told IRIN. He added that it was important to exert impartiality in food distribution, since problems would arise if certain groups felt they were being ignored in favour of others. Before the current crisis, FTC fed some 120,000 children through schools, a programme that is now suspended.

Amid the looting and violence, most health centres in the slums are closed. As well as offering primary health care, such centres also distribute antiretroviral (ARV) treatment for people living with HIV as well as medication for those with tuberculosis.

If health centres remain closed for much longer, some of these patients may default, or interrupt their treatment. Even if clinics reopen soon, there is concern for those who are displaced or belong to an ethnic group whose members are afraid to be seen moving around.

The Kenya Red cross team carries one of the casualties of the post election violence that has been on going in various parts of Kenya, Mathare slums, Nairobi, Kenya. 3 January 2008. 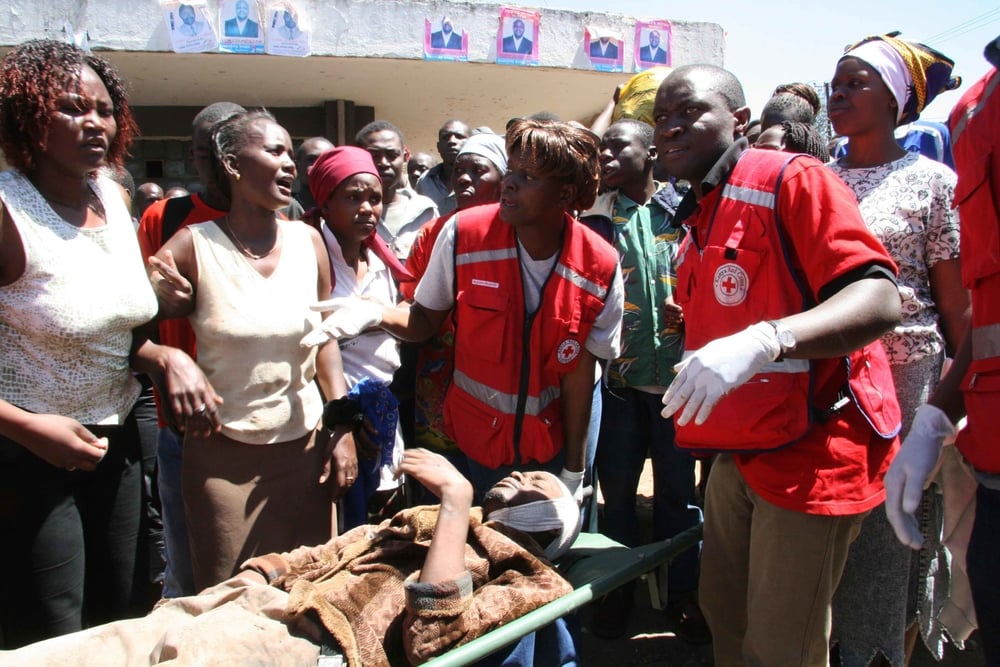 Julius Mwelu/IRIN
The Kenya Red cross team carries one of the casualties of the post election violence that has been on going in various parts of Kenya, Mathare slums, Nairobi, Kenya. 3 January 2008.

Ian Van Engelgem, medical coordinator for MSF-Belgium, told IRIN that halting ARV treatment for a week was less worrying than defaulting on TB medication. “That’s much more dangerous. It can lead to increased resistance of the bacillus, reinfection and the infection of other people.”

Health facilities for slum-dwellers have also been compromised because many of the doctors working in Nairobi’s main hospitals who left the city for Christmas holidays have been unable to return to the capital.

While the majority of slum-dwellers have stayed put, for want of anywhere else to go, fear of moving into uncertain territory or desire to protect their property, thousands have made their way to makeshift camps around the capital. Around three thousand residents of Kibera, half of them children, are now staying in the neighbouring Jamhuri Show Grounds, the venue for Nairobi’s annual international trade fair.

But she added “we don’t want a massive influx of food in Jamhuri because it will just serve as a magnet.

“Yesterday houses were being burnt. Our documents were burnt. Now how do we get jobs? We don’t know where to run to,” one of the displaced, Lillian Khayere, told IRIN.