Not long ago hailed for its exemplary efforts to reduce hunger, Brazil is seeing a marked deterioration in its food security indicators as the economic fallout of COVID-19 deepens and a growing number of people struggle to afford a nutritional diet amid government aid cuts.

Considered an upper middle income country, Brazil was removed in 2014 from the World Food Programme’s Hunger Map after a decade of progress in reducing hunger. But less than seven years later, more than half its 212 million population is grappling with some level of food insecurity – and almost one in 10 with serious hunger.

“With more than 19 million people facing serious food insecurity, the ‘yellow [warning] light’ has been turned on,” Daniel Balaban – director of the Center of Excellence against Hunger, and the WFP’s representative in Brazil – told The New Humanitarian.

To be placed on the WFP’s Hunger Map, a country must have at least five percent of its population facing serious food insecurity. With nine percent of Brazil’s population now in that category, “we can say that the country is effectively back on the map”, said Balaban. Because Brazil's IBGE census bureau hasn’t officially released the latest data – there is no scheduled date for that release – the map can’t yet be updated to reflect this, he explained.

For Eliana Macedo, the economic effects of the pandemic struck when the families whose houses she cleaned suspended her services, afraid of letting outsiders into their homes.

After receiving four months of emergency financial aid from the government in 2020, the 44-year-old single mother of two – who lives in a poor community in Salvador, the capital of Brazil’s northeastern state of Bahia – now gets by on charity food aid.

“Hunger is blind; it's ugly, and it hurts,” she told The New Humanitarian. “You wake up in the morning, look for a piece of bread to give to your child, and you don’t have any. It’s already noon and he's crying from hunger, and you don't have anything to give him. It's very bad.”

Like many hungry families across Brazil, Macedo receives support from the Unified Center of Favelas, or CUFA, a grassroots organisation created by young slum dwellers to promote development.

In response to growing needs due to the economic impacts of COVID-19, CUFA launched a campaign to raise funds to purchase food for those in need: It now operates in over 5,000 slum communities around the country, helping over six million people in all 27 Brazilian states.

Brazil received plaudits in 2014 when the global hunger report compiled by the UN’s Food and Agriculture Organization (FAO) revealed that the number of undernourished Brazilians had fallen by more than 80 percent in 10 years. The Brazilian government was praised for its “Zero Hunger” campaign, which made eradicating extreme poverty and hunger a cornerstone of its social and economic policies.

But between 2014 and 2019, food insecurity grew faster in Latin America and the Caribbean than anywhere else in the world – surging from 22.9 percent to 31.7 percent “due to a sharp rise in South America”, according to the FAO.

The FAO’s 2021 report indicates that although Brazil still has better indicators than the Latin American average, its situation has deteriorated in the last four years, and more sharply still since COVID-19 arrived last year. A March 2021 study on the effects of the pandemic – conducted by Brazilian research NGO PENSSAN – showed that about 116 million Brazilians, or 54 percent of the population, faced some level of food insecurity in 2020.

Fátima Cassanti, general coordinator from 2004-2008 of the Promotion of Food and Nutrition Programs – a key part of implementing the Zero Hunger policy – said the government used to provide emergency food packages, constructed community water cisterns, partnered with restaurants to offer meals for R$1.00 ($ 0.20), and created community kitchens in the favelas. 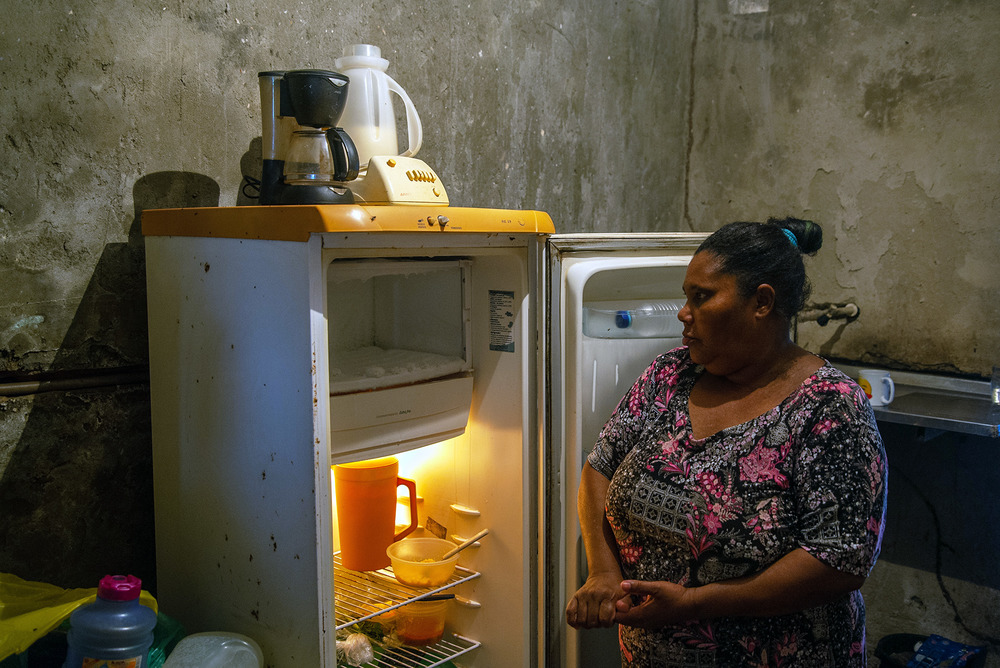 Felipe Iruatã/TNH
Flordenice Souza, 54, lives in the Sussuarana neighbourhood in Salvador. Since the pandemic began, she has struggled to buy food for her family and relies on the donations she receives from CUFA.

"At the time, there was a strong political desire that every Brazilian have access to three meals a day,” Cassanti told The New Humanitarian. “Whenever there is a political will, things start to happen.”

During its first year, according to Cassanti, R$100 million ($19.24 million) was earmarked for the programme and disbursed in 2004. According to federal budget data, the government set aside over R$1 billion ($192.4 million) for Zero Hunger between 2004 and 2007. In parallel, the government increased the minimum wage and created the Bolsa Familia programme, offering support to families to keep their children in school.

But in 2015, aid groups working on food insecurity in the country began to see an increase in the number of Brazilians going hungry. Amid the political crisis of President Dilma Rousseff's second term and the arrival of a global mini-recession in 2015, the federal government failed to adopt a series of key social protection policies, said Denise Oliveira e Silva, a researcher at Fiocruz, one of Brazil’s main public research institutions. Those social safety nets were further weakened in subsequent years – during the administration of Michel Temer and, more recently, under President Jair Bolsonaro, who took office in January 2019.

“What are the first measures that Bolsonaro takes? To remove the National Council for Food and Nutrition Security (CONSEA) and other social protection policies,” said Oliveira e Silva.

Those changes led to an increase in both severe and moderate food insecurity, according to Rosana Salles-Costa, a professor of nutrition at the Federal University of Rio de Janeiro (UFRJ), and also a researcher at PENSSAN. Severe food insecurity is characterised by the inability to eat for a whole day; while moderate food insecurity means that a person is concerned or uncertain about future access to food, or the quality of food they can access is compromised.

“For the past few years, we have seen the deterioration of [both] the indexes,” said Salles-Costa. “But the pandemic has aggravated the scenario even further.”

Asked about the decline by The New Humanitarian, Brazil's government insisted that these earlier programmes were wrapped into other larger ones, and that new “safety net” initiatives had been created.

“[Zero Hunger’s] actions were incorporated into programmes such as Bolsa Família (PBF), an initiative that contributes to the fight against poverty and inequality in Brazil, serving families living in poverty and extreme poverty," said the ministry of citizenship in an emailed response.

The ministry did not provide a breakdown of funds allocated specifically for hunger relief, but said that since April 2020 a total of more than R$365 billion has been invested in social assistance policies, including nearly two million food baskets distributed throughout Brazil to more than 850,000 families this year alone.

But researchers say the situation on the ground demonstrates that any efforts to bundle the programmes together have fallen way short of the mark.

A survey conducted by CUFA and the research company Locomotiva this year of residents in 76 Brazilian favelas reveals that the majority of families eat fewer than two meals a day.

Another survey – by Food for Justice from Freie Universität Berlin in Germany, in partnership with researchers from the Federal University of Minas Gerais and the University of Brasília – found that 59 percent of households interviewed in November and December 2020 had reduced their daily food consumption.

A growing foreign market for commodities like soy and other grains – and a recent spike in fuel prices – have also hindered food security for Brazilians.

With rising export demands from foreign buyers, especially China, Brazilian farmers are opting to sell their crops abroad for more money, leaving the domestic market unattended. The country is also facing its worst drought in over 90 years, and a poor harvest could see a steep decline in production in the coming months, increasing prices even further.

“Here at Fiocruz, we regret this government's negligence in relation to food security in Brazil,” said Oliveira e Silva. “There is no dialogue between the federal government and sectors of society that could help [with the food insecurity crisis]. There is no statement from any minister in the Bolsonaro government regarding hunger; it is a taboo.”

The Citizenship Ministry responded to this criticism by stating that it has also worked to continuously strengthen the Food Acquisition Program, whereby the government buys food produced by family farmers and allocates it to those going hungry. According to officials, in 2020 alone, more than R$247.6 million was transferred through the programme to more than 54,000 families. In 2021, meanwhile, the government launched the Brazil Fraternal Initiative – to acquire and distribute food baskets to those who most need it.

But with 116 million Brazilians facing food shortages, experts say these newer measures still fall far short of what is needed, and they expect a further rise in hunger, food insecurity, and poverty unless more drastic action is taken. 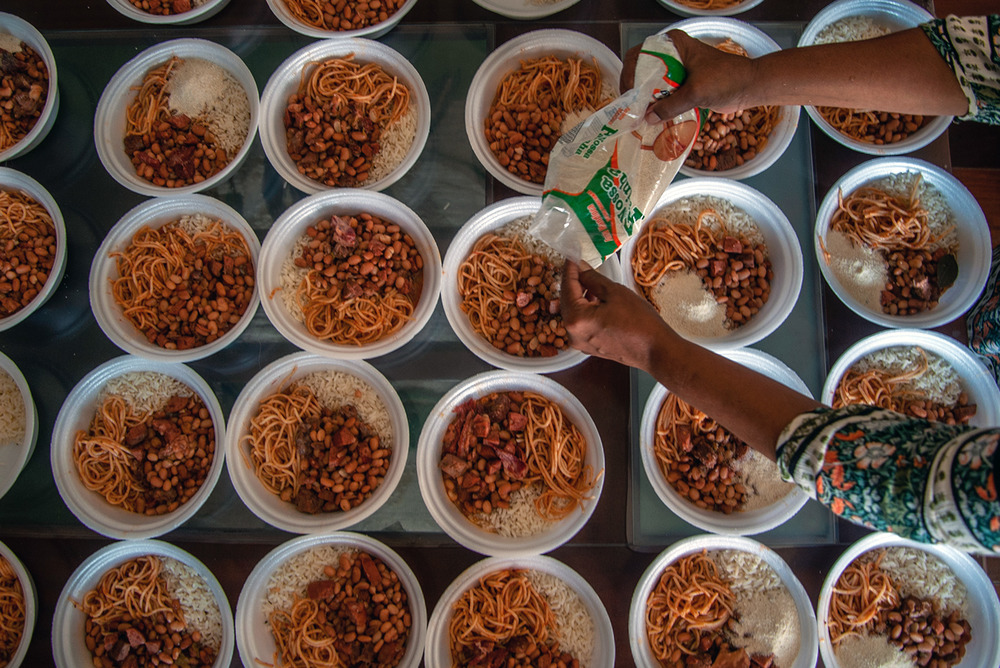 Felipe Iruatã/TNH
Meals are prepared by an informal community aid group in Salvador.

“We do not think that the solution to hunger is to distribute food baskets or take leftovers from restaurants or food donations from people to distribute to the population,” said Daniel Souza, a spokesperson for Brazilian NGO Citizenship Action, which says it was forced to resume emergency food aid deliveries in 2017 after a 10-year pause. “We don't want to do that,” said Souza. “We want the government to assume its role again.”

Unless the innovative government policies of the early 2000s are revived, experts say even the end of the pandemic won’t make the situation better.

“Either the social policies in combating hunger and poverty that were adopted in 2003 to 2004 to reduce this hunger scenario in Brazil are brought back, or we are just going to keep reproducing the increase in hunger, the increase in serious food insecurity,” said PENSSAN’s Salles-Costa.

For five months during 2020, the government handed out emergency aid of R$600 ($121) each month to nearly 70 million people who lost their income due to the pandemic. This, said WFP’s Balaban, led to smaller numbers going hungry. But in 2021, the government has significantly slashed this aid, providing an average of R$275 ($55) for three months to 35 million people.

“Without a robust return to government social spending, there will be little chance of stopping hunger,” said Balaban. “The cost of hunger is much greater than the investment needed to avoid it. We used to be an example of public policies to fight hunger. We helped other countries to create public policies adopted here in Brazil. Everyone came here to see our programmes. They are now doing great with these policies, and we’ve backtracked.”