This story was reported from the Ethiopian capital, Addis Ababa, by a journalist whose name is being withheld for security reasons.
ADDIS ABABA

Ethiopian federal forces captured the Tigrayan capital of Mekelle at the weekend, but a vow by the rebel regional government to fight on means there’s no end in sight to the unfolding humanitarian crisis.

Among those most at risk are 96,000 Eritrean refugees sheltering in four camps in Tigray, cut off from desperately needed relief supplies.

“We are surrounded by war, and we can't move,” one Eritrean refugee told The New Humanitarian from Mai-Aini camp.

Unlike most places in the region – where communications have been blacked out by the Ethiopian government – Mai-Aini, located in southern Tigray, has at least some mobile phone coverage.

The refugee told TNH there was little food or fuel to run the camp’s water pumps, and added that fleeing further away from the conflict zone had become even harder due to vehicles being banned on the roads and the banks being shut.

“Even if our families send us money, we cannot get it as the banks are closed,” said a second Eritrean refugee, again speaking from Mai-Aini by phone. 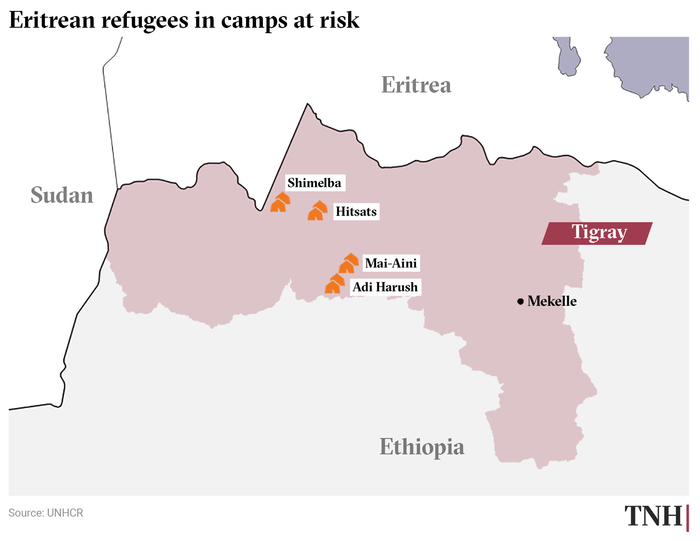 The conflict, which pits the region’s powerful ruling party, the Tigray People’s Liberation Front (TPLF), against a federal government determined to halt a defiant rebellion, has cut humanitarian access to both refugees and war-affected Tigrayans. It has also forced close to 45,000 people – mostly Ethiopian Tigrayans – to flee into neighbouring Sudan.

Ethiopia has been a longstanding home to around 178,000 Eritrean refugees fleeing political persecution, economic hardship, and compulsory military service at home.

An added threat to the refugees in Tigray is the direct involvement in the conflict of neighbouring Eritrea – the TPLF’s arch-enemy – on the side of Prime Minister Abiy Ahmed and the federal government.

The refugees are regarded as “traitors” by the hardline government of Eritrean President Isaias Afwerki, and there have been accounts of refugees being abducted by the Eritrean army and taken back across the border.

“We have heard the same worrying reports, but the difficulty of communication with the region means it’s very hard to verify any information,” Babar Baloch, a spokesperson for the UN’s refugee agency, UNHCR, told TNH.

Rockets fired from Tigray hit the Eritrean capital, Asmara, on Sunday. It was the third recent rocket attack, but the TPLF only claimed responsibility for the first strike two weeks ago.

The TPLF has also allowed Eritrean opposition groups to operate from its territory. In March, armed Eritrean dissidents and “uniformed Tigrayans” reportedly entered the Hitsats camp in Tigray and coerced Eritrean refugees to chant: “Down with Isaias! Down with Abiy!”

Getting aid to the region is still extremely difficult due to the ongoing fighting. UNHCR delivered two months of rations to the camps in Tigray in October, but expects those supplies to be exhausted in the next few days.

“Food stocks for refugees are critically low,” UNHCR’s representative in Ethiopia, Ann Encontre, told TNH. “Other services such as water and health will be heavily affected if staff cannot access the camps.”

The International Committee of the Red Cross (ICRC) said in a statement on Sunday that some 1,000 Eritrean refugees had arrived in Mekelle looking for food and help – but relief supplies are extremely limited even in the regional capital.

“It is hard for us to meet these needs now after weeks of disrupted supply chains into Mekelle,” ICRC spokesperson Crystal Wells told TNH.

Abiy has said he intends to open a humanitarian corridor to distribute basic supplies to those in need in Tigray, but it is unclear if the pipeline will extend as far north as the refugee camps – and whether it will be free of political control.

“The humanitarian community has been asking for unhindered access to the refugees in the four camps, and also others displaced,” UNHCR’s Baloch said. “The call still stands.”

One group of Eritrean refugees who had arrived in the Ethiopian capital, Addis Ababa, told TNH last week of their harrowing escape from Adi Harush – another camp in Tigray – to Adi Arkay, the nearest town in the neighbouring Amhara region.

“We saw dead bodies, and we were really scared,” said Darwit, describing his seven-hour journey on foot, and asking that his full name not be used for security reasons. “We met TPLF soldiers on the way, and they forced us to give them everything we had, including our money.”

Last week, after Darwit’s group had left Adi Harush, at least two refugees were killed and four injured when Amhara militia, allied to the Ethiopian government, overran TPLF soldiers based there.

Long before the current crisis, the camps in Tigray’s arid north were overcrowded and short of food and water – even though there are a significant number of unaccompanied minors among the refugees.

Then, as the fighting got underway in early November, all aid workers were pulled out.

“All the United Nations staff [were] withdrawn and many underaged refugees were alone without knowing what to do,” said a young man from Darwit’s group, now sheltering in a cramped flat in the Mebrat Hail suburb of Addis Ababa.

Eritrean refugee arrivals spiked in 2018 following a peace agreement between both countries that restored relations after a border war from 1998 to 2000, and which earned Abiy a Nobel Peace Prize.

But the border crossings that opened with fanfare have since shut, and Eritreans are no longer granted automatic prima facie refugee status.

For Eritrean refugees living in Addis Ababa, life is becoming increasingly uncertain as a result of the alliance between Abiy and Afwerki.

Speaking the same Tigrinya language as people from Tigray, some of whom have been purged from the civil service and the military as a fallout of the conflict, means the Eritreans often encounter an added layer of suspicion.

“There are checkpoints asking for ID, and in the last three days it has been very difficult to get money from banks,” said another Eritrean refugee, who asked not to be named.

“I don’t have a refugee ID, only a fake Tigrinyan ID card, and I’m afraid,” he added.

Eritrean dissidents, who for the past decade have been involved in opposition politics from Addis Ababa, now fear arrest and deportation.

“If the war continues, no one will be safe,” said one activist, who told TNH he was now limiting his movements around the city to avoid the police.

“For a lot of refugees in Addis Ababa, the only way to survive is to go to Kenya, Uganda, or Juba [South Sudan],” he added.

Additional reporting by Sara Creta in Palermo, Italy, and by Obi Anyadike in Nairobi, Kenya.