President Daniel Ortega is making life increasingly hard for aid and human rights groups in Nicaragua even as poverty, malnutrition, and emigration due to political strife are on the rise, and as he is criticised for a dismissive and reckless response to the coronavirus outbreak.

“In Nicaragua, simply existing as a person carries a risk,” Ana Quirós, director of the Center for Information and Advisory Services in Health, or CISAS, told The New Humanitarian. “You do not need a particular reason to become a victim of violence, of repression, kidnapping or assassination. It is a general risk.”

Quirós was deported and stripped of citizenship in November 2018 after the government accused CISAS, which had been working on health education and HIV prevention in Nicaragua with the support of several international aid groups and actors – including Medico International, Medicus Mundi, and the EU – of “participating in destabilising activities”.

Quirós said individuals still working with aid and civic groups in the country are under great threat, and that several people who had been working with CISAS in Nicaragua since it was banned had been forced to flee the Central American country.

“It has been during this pandemic that the absence of the NGOs has been most strongly felt, especially for us working in health,” the CISAS director said. “The government hasn’t made any efforts regarding communication, training, education in health, and with regard to the other basic human rights of the population,” Quirós said. “The population is very unprotected, and is hungry for information and real knowledge about the risks and measures that one needs to take to prevent illnesses.”

The Citizen’s COVID-19 Observatory, an independent group monitoring the coronavirus in Nicaragua reports, as of 2 September, 9,998 suspected cases, nearly three times the official count of 3,659 cases, as well as 2,680 deaths, way above the government’s figure of 137.

Forty years after Ortega led a socialist revolution to uproot the dictatorship of Anastasio Somoza, Nicaragua continues to be burdened by a host of humanitarian concerns, albeit as it isolates itself from international aid institutions.

Under the government leadership of Ortega and his influential wife, Vice-President Rosario Murillo, the country remains one of the poorest in Latin America, while the violent repression of political opponents since April 2018 has generated a migration crisis proportionately comparable to that of Venezuela.

After Ortega’s re-election in 2006, Nicaragua’s poverty rate fell, following a similar trend throughout Latin America, but an independent report published at the end of 2019 estimates that it has since soared, and that roughly a third of the population, or more than two million people, now live on less than $1.76 per day.

According to the World Food Programme, 17 percent of children under five suffer from chronic malnutrition, with the rate at nearly 30 percent – similar to humanitarian crisis settings such as Somalia – in Nicaragua’s northern provinces, which form part of Central America’s dry corridor. In 2019, WFP provided assistance to 45,000 people in Nicaragua affected by the seasonal climate change-linked emergency.

“In Nicaragua, simply existing as a person carries a risk.”

Like in other Central American countries, most families in Nicaragua have at least one member who has migrated in search of better opportunities. But while much of the migration from Nicaragua’s neighbours – in the so-called Northern Triangle countries of El Salvador, Guatemala, and Honduras – is driven by gang violence, many Nicaraguans have, since 2018, fled due to political repression.

The Armed Conflict Location and Event Data Project (ACLED), an NGO studying conflict scenarios – which recently published a report on civil society protests in Nicaragua – says the humanitarian situation in the country could be even worse than the aid sector thinks.

“Due to severe restrictions on free assembly and expression, it is probable that protection and humanitarian needs are under-reported in Nicaragua,” ACLED wrote in an email to TNH. “It is clear from current political violence and demonstration trends in Nicaragua – particularly amid the pandemic – that the situation requires urgent attention from international humanitarian actors.”

Demonstrations initially flared in April 2018 against a social security reform, which has since been scrapped. They later morphed into broader political unrest as the government responded with heavy-handed measures against student protesters, and as dissatisfaction grew at government corruption and the Ortegas’ increasingly autocratic rule.

The ensuing government crackdown led to the deaths of hundreds of people – the government set the number at 197, while human rights groups say it was at least 325 – and drove more than 103,000 people to seek asylum abroad. Most fled to neighbouring Costa Rica, where at least 400,000 Nicaraguans had already been living.

In July, Michelle Bachelet, the UN High Commissioner for Human Rights, condemned the ongoing repression in the country two years after the initial protests, listing a litany of government offences between March and June, including arbitrary arrests, house searches without warrants, and detentions, threats, and intimidation. 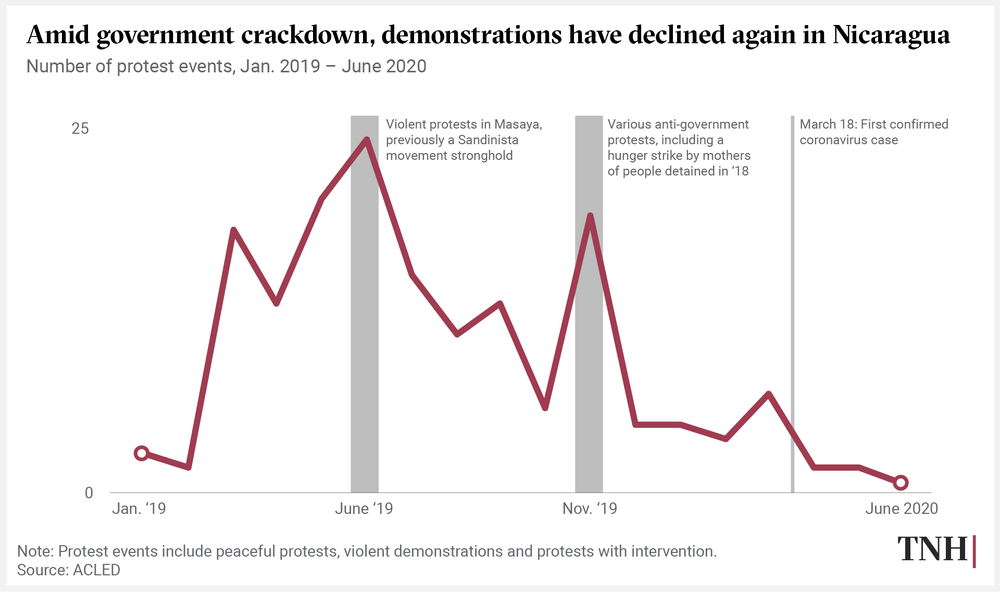 “Human rights violations continue to be documented against those who the government perceives as opponents, including human rights defenders, journalists, social leaders, and former political detainees,” Bachelet reported.

The crushing of the opposition included, in 2019, the revocation of the legal status of a number of civil society groups and local NGOs – the Nicaragua Centre for Human Rights (CENIDH) and CISAS among them.

“Here, one cannot organise trade unions or teachers. One cannot organise any group that is not under the auspice of the regime,” Monica Baltodano, director of the Popol Na Foundation, another of the banned groups, told the independent news site Confidencial last December.

“One cannot organise any group that is not under the auspice of the regime.”

Groups say the timing has now made matters worse, with Nicaragua the only country in the region not to have taken stringent measures to prevent the spread of COVID-19.

Instead, the government has promoted mass gatherings, including a march called “Love in the time of COVID-19”, which included a parade, beauty pageants, and food fairs. Vice-President Murillo told Nicaraguans that the country was under divine protection, while officials ordered medical staff not to wear personal protective equipment (PPE) in order not to scare patients.

In July, 25 doctors were fired for signing a letter critical of the government’s handling of the pandemic. It asked simply that health workers should not be persecuted and that they be allowed to use PPE.

After the United States and the EU imposed financial sanctions on Nicaraguan officials last year, 65 of the 148 officially recognised political prisoners were released from prison in December. Further sanctions have been imposed since, including on a second son of the presidential couple.

But international political pressure has routinely been countered by the message that Nicaragua will manage on its own.

International aid groups and agencies have also experienced government pressure as it attempts to influence and define their roles. Ever since Ortega resumed the presidency in 2007, the organisations have had to operate with increasing care, former aid workers familiar with the country told TNH.

In 2015, the United Nations Development Programme was told by the government that it was no longer needed as an intermediary between donors and those executing development projects. Without providing further details, the authorities said the agency and its country chief were accused of “political meddling”, and of maintaining a “hidden agenda”.

UNDP told TNH at the end of July that its operations in Nicaragua were now “limited” and that it did not have a resident representative or a deputy representative. The UN agency did not respond to requests for further comment on the situation in the country.

In 2018, the government expelled a UN human rights team after the Office of the UN High Commissioner for Human Rights requested an immediate end to the persecution of political opponents and called for the disarming of masked civilians responsible for a string of killings and detentions. Soon after, two missions of the Inter-American Commission on Human Rights (IACHR) investigating violence during the anti-government protests were also thrown out.

PAHO continues to await authorisation to send a team of experts to evaluate the situation. Since the beginning of the outbreak, it has donated PPE to the health ministry, while repeatedly stating that the official COVID-19 data provided is incomplete.

In spite of donations from various international sources, doctors have argued that distribution of masks and other PPE items remains inadequate. As of 26 August, Citizen’s COVID-19 Observatory estimated that 107 health workers in Nicaragua had died from the coronavirus.

The US government’s international aid department, USAID, has excluded Nicaragua from $274 million in funds dedicated to help poorer countries fight COVID-19 despite the fact that the 2018 NICA Act – which prohibits loans to the country until free elections are held – states that this does not apply to assistance intended for “humanitarian needs”.

Meanwhile, the International Committee of the Red Cross, one of the few international aid groups with a presence in Nicaragua, has offered its support to help with the release of what human rights groups estimate – following the protest crackdown – to be more than 6,000 political prisoners.

In a written statement to TNH, the organisation said: “The ICRC returned permanently to Nicaragua in 2018. We have been visiting detention sites since 2019, and in November 2019 renewed our host country agreement. We can develop our humanitarian action with openness, in dialogue with the authorities and civil society, according to our humanitarian principles and working methods.”