Without money to plant, Lebanon’s farmers were already in deep trouble before last week’s explosion. Far from being the solution to the country’s food shortages, the agricultural sector that is a lifeline to many Syrian refugees now risks falling into full-blown crisis.

The 4 August blast, which appears to have been caused by a large quantity of ammonium nitrate that had been stored at the port for years, killed more than 200 people and injured thousands more.

But it also destroyed 15,000 metric tonnes of wheat as well as Lebanon’s main grain silos, meaning ships bringing in the estimated 65 to 80 percent of the country’s food that comes from abroad may – at least for a while – have to dock at other ports, like the northern city of Tripoli. This will likely contribute to already rising prices.

The damage from the explosion will “significantly exacerbate the already grim economic and food security outlook in the country”, the World Food Programme said in a 6 August statement.

Analysts have been warning for years that Lebanon’s heavy reliance on imports is dangerous for its food security, a situation that has been thrown into sharp relief since last September, as the value of the Lebanese lira fell from its official rate of 1,500 to the US dollar to more than 8,000. Subsidies for wheat and other staples have been brought in to stem the economic crisis as remittances from abroad have dropped and banks have set limits on withdrawals of badly needed US dollars.

Since the explosion, Lebanon has seen widespread protests, the resignation of its entire government, and promises of international aid. Some of the latter will go towards fixing the port and the monthly rations WFP says it will hand out to 50,000 additional people across Lebanon for the next six months. This is on top of 270,000 Lebanese it already planned to assist in the country this month, part of a scale-up to help the country cope with the economic crisis. The agency is also reportedly going to send 50,000 tonnes of wheat to Lebanon.

But that won’t solve the problems of farmers like Mohammad Abdallah, a Syrian from Aleppo who works a plot of land in Lebanon’s northern region of Akkar.

Late last month, Abdallah and a few other farm workers took refuge from the glare of the sun and the stuffiness of the tents where they live on a small tree-shaded blank overlooking an empty row of plastic-covered greenhouses.

This year, many farmers did not have enough dollars to buy imported supplies to plant during the short summer growing season. Some of them will not plant in the fall either.

While many of Lebanon’s 1.5 million Syrian refugees work as day labourers, Abdallah and seven other Syrian families live together in a small camp and have an arrangement with a Lebanese landowner: The owner buys the supplies needed to plant the land; the Syrians plant and work the land, and keep a quarter of the proceeds after they bring the products to market.

This arrangement, and Lebanon’s agricultural sector as a whole, are now in jeopardy.

“If the dollar doesn’t go down, we won’t plant,” said Abdallah.

“Look around at the projects; they are all empty. No one is able to plant anything,” said a Lebanese farmer, Samir Khodor, who owns a small plot of land nearby. “I can’t plant anymore. I can’t [afford to] buy the chemicals. I can’t buy the seeds.”

The lack of purchasing power has impacted everyone in Lebanon, including farmers like Abdallah and Khodor.

At the same time as their money is worth less, prices have increased. According to the WFP, between September and May Lebanon saw a 109 percent increase in the monthly average price of the basket of foods considered to be the minimum needed for survival.

The price increases have been largely driven by the increasing costs of imports, worsened by the COVID-19 pandemic and the attendant barriers to transporting goods.

Most farmers buy seeds, fertiliser, and other imported supplies on credit – in dollars – and pay back the loans with the proceeds of the season once they have harvested their crops. With dollars now in short supply, farmers have been struggling to pay back their creditors, and companies are unwilling to give out new credit for the coming growing season.

“The purchasing power of the farmer is going to be so low that we are afraid that the next [agricultural season], which starts in September 2020... may not start,” warned Riad Fouad Saade, president of the Center for Research and Lebanese Agricultural Studies (Centre de Recherche et d'Etudes Agricole Libanais, or CREAL), a research centre tracking the agriculture industry in Lebanon.

“Farmers don’t have the ability to plant, no one will give them credit.”

Speaking to The New Humanitarian before the blast, Saade predicted that the worsening currency crisis would likely mean a 60 to 70 percent drop in agricultural production. Now, he says the outlook is even worse: Saade says the loss of the grain silos and other port infrastructures are surmountable challenges, but the ensuing chaos and the government’s resignation en masse will exacerbate existing issues in Lebanon’s food production system.

“As long as we had a system, even a bad one, a structure, even a bad one… it was okay. We could position ourselves.” But now, Saade said, “I don’t see the state operating nowadays. I see real chaos.”

Ibrahim Tarchichi, president of the Syndicate of Farmers and Peasants in the Bekaa Valley, and the general manager of a farmers’ cooperative in the eastern region, has similar concerns.

“Farmers don’t have the ability to plant, no one will give them credit,” he said in late July. Now, Tarchichi says farmers have to worry about port damage disrupting the access they had to export markets outside Lebanon, which had previously brought in some dollars.

“Of course this crisis and this disaster will affect all the productive sectors in Lebanon, and especially the agriculture sector,” he said, adding that agricultural exports had been sent out of the Beirut port, which is, for the time-being, partially out of commission.

Musa Freiji, head of the Lebanese Poultry Syndicate, told TNH that in addition to the wheat that was lost, the blast destroyed about 24,000 tonnes of corn in silos and 7,000 tonnes of soy on an incoming ship, leading a – possibly temporary – hike in feed prices for poultry farmers. 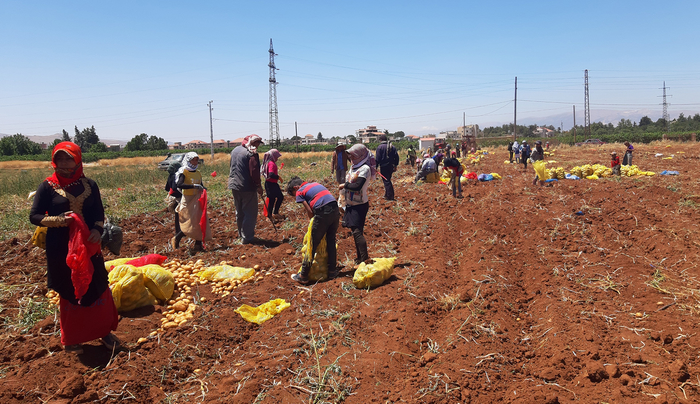 Alarm bells have been ringing about Lebanon’s reliance on imported food for years.

A May report by the Beirut-based think tank Triangle Research highlighted the growing food insecurity, arguing that the “ongoing currency shortage has made imports much more expensive, exposing the critical limitations of overwhelming import dependency – a disappointing legacy for a region which pioneered domesticated wheat some 9,000 years ago.”

Sami Halabi, director of policy at Triangle, told TNH late last month that “foreign reserves are dwindling,” and noted that, while Lebanon’s government had asked for, but not inked, a deal for $10 billion from the International Monetary Fund, “the situation will deteriorate in terms of food security.”

Speaking before the blast, WFP Country Director Abdallah Alwardat told TNH: “Food is coming, but at a high price. I’m afraid if there is no solution, all we would see is a (further) increase of food prices.”

In the absence of a government safety net, Halabi predicted that Lebanon is likely to turn to international aid to stop hunger, which at the time he said was still “a drop in the ocean… if we continue down the path we are on right now.”

In the aftermath of the explosion, this comment now appears prophetic, as a Sunday conference led by France saw pledges of $300 million in emergency aid, and the WFP announced it was looking to boost assistance in Lebanon.

It’s not clear what all this means for planned efforts to help farmers. The UN’s Food and Agriculture Organization had already been preparing to launch an intervention that should help at least some of the most vulnerable farmers through the coming season. The pilot programme will provide $200 vouchers (in USD) to 1,000 small farmers in the Akkar and Baalbek-Hermel regions to buy supplies from participating suppliers.

FAO Country Representative Maurice Saade said, speaking before the blast, that if the programme works as intended, he hopes to find more funding to scale it up.

The money currently provided will not cover the full cost of supplies, “but at least it would cover the essential costs so that we do not miss the planting season,” he said, adding: “It’s a way also to help the suppliers stand on their feet because many are near bankruptcy.”

There may be some silver lining for Lebanon’s farmers, FAO’s Saade said.

“The devaluation of the Lebanese pound will ultimately help agriculture,” he said. “It will make agriculture more competitive in the medium term. Farmers will be able to sell more, whether for export or for the domestic market – but to do so, they need to be able to plant. The emergency approach right now is to allow farmers to survive the coming season.”

But right now farmers and farmworkers are still trying to figure out what the changed circumstances will mean for them, and how to adjust.

“Before, the situation was all right… if you had work, you were able to save a bit. Now you can’t save [anything].”

Before the blast, Khodor said he had lost about 1.5 million Lebanese lira (the equivalent of $1,000 at the official rate or $187 at the street rate) on three greenhouses of cucumbers that he planted last season.

“I didn’t even get back the price of the seeds,” he said.

The losses have left his family and many others in a precarious situation. Khodor’s eight-year-old son has a condition that required him to have open-heart surgery. Doctors want him to undergo another procedure to put a valve in his heart, but his father doesn’t have the money to cover even a percentage of the costs.

“I’m not able to do the operation this year,” he said.

The contraction of the farming industry has an outsized impact on refugees. The UN estimates that agriculture is the main source of income for around 17 percent of refugees. In some areas, like Akkar where Khodor and Abdallah live, it is as high as 35 percent.

Abdallah’s family gets what used to be worth $27 a month per person from a UN agency. Due to the currency crisis and restrictions on taking out dollars, they have been receiving this aid in Lebanese lira – 70,000 a month, which buys considerably less than it once did.

“Before, the situation was all right… if you had work, you were able to save a bit,” Abdallah said. “Now you can’t save [anything].”

His family has cut back on food purchases, giving up meat entirely and rationing other items.

No one in the family has worked in three months, Abdallah said, and now they are facing the prospect that there may be no work in the fall season.

“If there’s no planting, there’s a big problem,” he said. “We don’t know what will happen. It’s a really big problem.”

With local reporting support from an individual whose asked not to be named.