Saidi Mburi’s shop sales are a good barometer of the economic health of Kibera, Nairobi’s largest informal settlement, and they have been terrible.

His cramped one-man store has always offered credit to regular customers, but now “people can’t pay, and it’s affecting me as well.” There are gaps on the shelves because he’s stocking just the basics: bread, sugar, milk, and maize meal – anything else is a “luxury” people can no longer afford.

More than 90 percent of Kenyans have seen their incomes fall as a result of COVID-19, and nearly three quarters of families have had to dip into savings – typically money set aside for school fees – according to Financial Sector Deepening Kenya (FSD Kenya), a trust that promotes financial inclusion.

Everyone is hurting in Gatwekera, one of the 13 hardscrabble neighbourhoods that make up Kibera. But there is a distinction in the suffering between those employed in Kenya’s formal and informal economy – and that could have significance for the country’s path to recovery.

It’s wage earners in Gatwekera like William Wajenge, a mason laid off last month, who have been most affected by the lockdown and slowing economy. Since March, almost a third of low-income workers have seen their jobs disappear, according to the research firm Trends and Insights for Africa.

Wajenge was employed on the construction of a new office block in Nairobi’s wealthy Westlands district. His dusty bag of tools still sits beside his bed, as if he expects to be off to work in the morning as usual.

Without his wage packet, his family of six are now down to two meals a day, “and sometimes it’s just lunch”, he said. His wife helps out by washing clothes, “but that’s rare”: Kibera is a COVID-19 hotspot, and people hesitate to hire domestic workers from here. 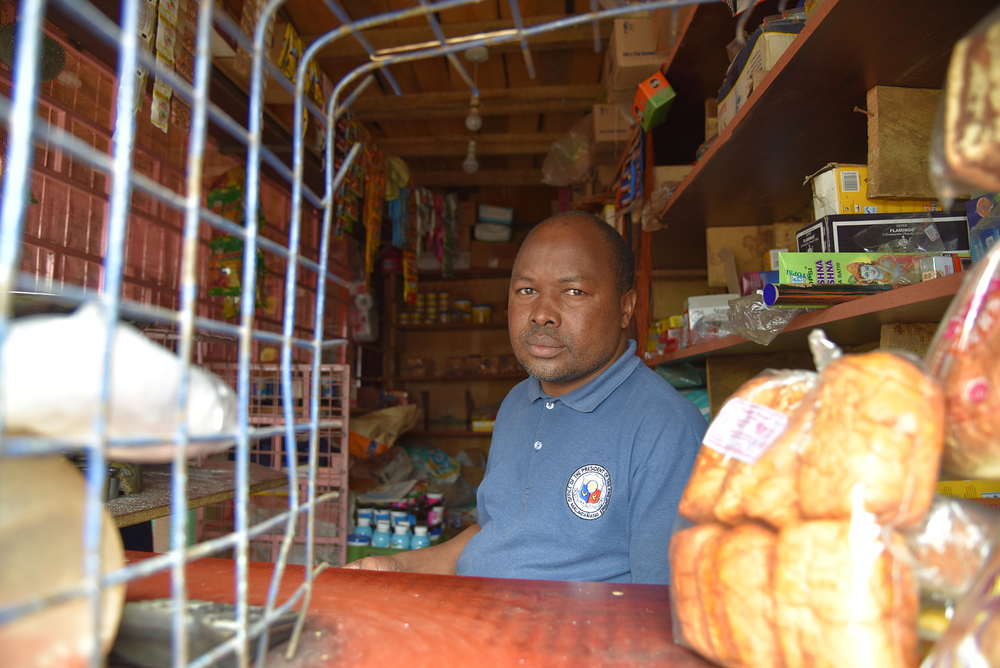 Nairobi’s skyline is impressive, but Kenya is still an overwhelmingly informal economy. Rather than the multinational companies the government tries to attract, it’s the teeming roadside workshops, dealers, and traders that employ more than 80 percent of Kenyans.

And in the age of COVID, the flexibility and resilience of that informality has – to an extent – tempered the economic hit of the coronavirus.

All along the narrow mud lanes of Gatwekera, traders are tightening their belts. Irene Achieng owns a small food kiosk serving chips, coffee, and tea to the mainly motorbike taxi riders waiting outside for customers. She used to go through “three big buckets of potatoes” in a day – now it’s just one.

Mburi and Achieng are clearly struggling, just like everyone else – but they haven’t folded. They have cut stock, reduced personal expenditure, and are likely juggling two or three chamas – informal savings and finance clubs – to see them through this period.

There has been a groundswell of calls for a more interventionist approach by the government to support this sector. It generates a third of Kenya’s GDP but historically has been denied access to formal financial services, stunting its growth, now further reduced by the coronavirus.

The idea would be to inject cash into both the roadside businesses and the pockets of their customers – similar to the stimulus measures adopted by other countries.

“What is driving our country is the informal sector: 80 percent of the economy is the ‘mama mbogas’ [roadside vendors] selling tomatoes and living in the slums,” said Kennedy Odede, founder of the grassroots movement Shining Hope for Communities (SHOFCO), active in 14 of Kenya’s informal settlements.

“What is driving our country is the informal sector: 80 percent of the economy is the ‘mama mbogas’ selling tomatoes and living in the slums.”

Researcher Niti Bhan sees this “indigenous economy” as the key to Kenya’s economic recovery. She points to the daily flow of fresh vegetables into Nairobi, controlled by local traders, as an example of its adaptability.

The value chain stretches from the rural farms to the mama mbogas in Kibera, with wholesalers the critical cog, able to absorb the additional costs of doing business in COVID times – from transport delays to the extra bribes paid to traffic cops.

Power to the mama mbogas

Women traders – and it’s overwhelmingly women – in Nairobi’s Marikiti wholesale market have shrunk their businesses and are absorbing a roughly 65 percent cut to their pre-COVID cash flow, said Bhan.

“Rather than frittering away working capital, they’re holding on to cash and waiting for [customer] purchasing power to look up, and that’s when they’ll invest again,” she told TNH. “They’re stretched to the limit, but nobody is talking about pivoting to [alternative jobs].”

She believes that with an investment plan, the informal sector can rebuild far faster than mainstream bricks-and-mortar businesses, dependent as those are on global financial health.

But the government has taken a more modest approach. It introduced a package of tax cuts and credit guarantees in March to ease the financial impact of the lockdown, primarily aimed at the smaller, formal side of the economy.

It also announced a $400 million social protection plan, including cash transfers, food relief, and a public works scheme, but its reach – and transparency – has been limited. Government grants have benefited less than two percent of Kenyans surveyed by FSD Kenya.

There has also been controversy. The public works initiative aims to provide 270,000 young people with a daily wage of $4.50 for 10 days of labour – but there have been protests over non-payment, and accusations of favouritism over who gets on the register.

Wajenge is not a beneficiary of any government programme, and is cynical. At election time, he gets text messages appealing for his vote: “They know us then, so why can’t they M-Pesa [mobile money transfer] me now? It’s the same phone number.”

One in five Kenyans live in slums devoid of basic public services – from water to sanitation – as a result of systemic neglect.

One in five Kenyans live in slums devoid of basic public services – from water to sanitation – as a result of systemic neglect. In Gatwekera, even the police hesitate to enter. Curfew is announced each evening by a volley of tear gas fired from where the tarmac ends on Olympic Road, only for it to be ignored.

Kenya’s private sector has stepped in to try to help fill the gap between the government’s limited response, and those in need.

A COVID-19 Emergency Response Fund Board, led by the CEOs of the biggest companies, is working with a consortium of NGOs to disburse $5 million in donated money via M-Pesa – with the goal of providing $10 a week for a month to the most vulnerable.

Odede’s SHOFCO Urban Network has 500,000 people on its books, but the fund’s first round will only reach roughly 40,000 Kenyans – although every penny is welcome in the informal settlements. 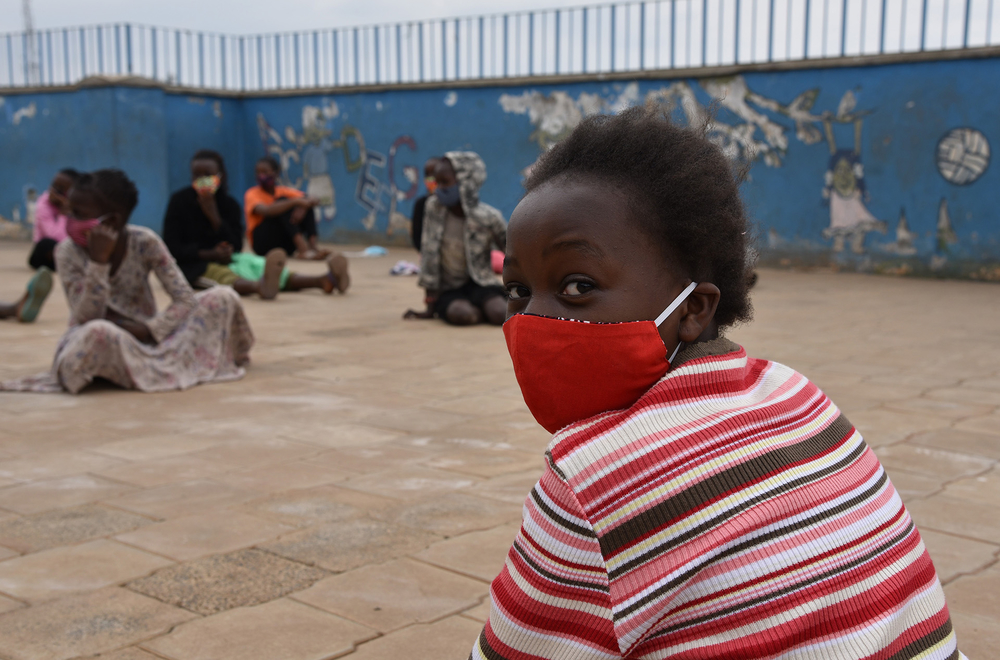 Time for something different

FSD Kenya, however, sees the current crisis as an opportunity to do something far more impactful.

“If you view cash transfers only as a humanitarian effort, then you're missing the point,” said Amrik Heyer, senior research adviser at FSD Kenya. “Cash transfers can play an important role as an economic stimulus to reboot consumption.”

Kenya’s best-known economist David Ndii has called for an ambitious $500 million to $1 billion “lifeline fund” to provide soft loans to informal businesses and the workers they employ, financed through internal budgetary savings and a moratorium on foreign debt servicing.

Some analysts have gone bigger, suggesting a universal basic income grant of $20 per month to every adult for three months at a rough cost of $1.8 billion – around two percent of GDP.

“It may take something of the magnitude of COVID to shift ideas – to force more attention on different economic models that are more inclusive and sustainable,” Heyer told TNH.

But there is little evidence the government is considering such a policy U-turn. It is weighed down by debt, and President Uhuru Kenyatta is facing what has been described as a “triple headache”: a distracting political succession battle; a struggling economy; plus the pandemic.

“It may take something of the magnitude of COVID to shift the ideas of the people in power – to force more attention on different economic models that are more inclusive and sustainable.”

Easing the lockdown in July led to a surge in COVID-19 cases – up from 7,800 reported infections at the beginning of the month to almost 24,000 now. Hospitalisation rates are relatively low, but contact tracing has all but collapsed.

“The only way to keep Kenyans alive as we work our way through the second and third wave is unconditional cash transfers,” said anti-poverty campaigner, Jerotich Sei. “You don’t need to waste time doing assessments – you know anyone living in Kibera needs to get an M-Pesa.”

Odede at SHOFCO has faith that “the government’s eyes have been opened by COVID”.

It’s partly self-interest – further economic pain could lead to unrest. But, he said, it’s also a moral issue: People in informal settlements “pay rent, pay taxes, and serve the country economically”, and they should be the focus of a “broader-based” growth strategy.