Hanover Park, a depressing neighbourhood of drab buildings and unemployed young men, is one island in a violent gangland archipelago that stretches across South Africa’s coastal city of Cape Town, where even the deployment of the army has failed to stop the shootings.

Gangsters as young as 12 operate within a contested jigsaw of fiefdoms in the historically “coloured” township just a 15-minute drive from well-heeled central Cape Town, South Africa’s legislative capital.

Mary Bruce points to identical three-storey flats 30 metres from her Donegal Court home in Hanover Park. “That’s the Ghetto Kids. Over there is the Dollars, and this side is the Americans: they fight everyone.” A couple of hundred metres towards the taxi rank the “turf” yields to two more gangs – the Mongrels and Laughing Boys.

Up to 500 youths in Hanover Park could be classed as “child soldiers”, according to Brian Williams, a visiting professor for peace, mediation, and reconciliation at the University of the Sacred Heart Gulu, in Uganda.

He sees the gangs as “non-state armed actors” controlling territory and resources, from Tik – the local euphemism for methamphetamine – through to the trade in abalone, a valuable shellfish, and various protection rackets.

Victims are the community

Nearly 7,000 people in Hanover Park are thought to be active within the myriad street gangs that have their roots in a prison gang culture on the Western Cape that stretches back more than 100 years.

It’s a multi-tiered system that incorporates gunmen – known as shooters – through to narcotic merchants, robbers, and enforcers, adhering to complex codes of conduct that are amplified during time spent in jail.

The victims are civilian members of the community routinely maimed and killed in the crossfire of rival gangs.

When The New Humanitarian first met Bruce, she was cleaning and dressing a gunshot wound sustained on a July Sunday morning while doing household chores.

The first round skipped off the road separating her backyard from the Summer Primary School perimeter fence she uses for a washing line. The next hollow-point bullet shattered her lower right leg. 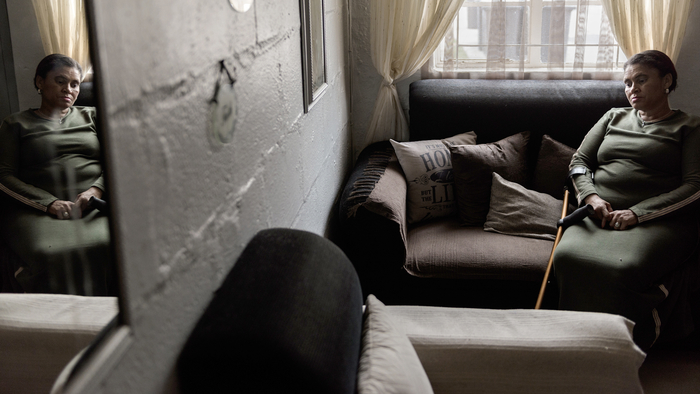 Guy Oliver/TNH
Mary Bruce was born in her Hanover Park flat 48 years ago, after her parents were forcibly removed from their District 6 home in Cape Town during South Africa’s apartheid era.

The 48-year-old mother crawled behind a car during the 10-minute exchange of gunfire. She was found by a little boy a few minutes after the shooting subsided. “He froze when he saw me and the blood,” said Bruce. “He turned and screamed.”

Two people were killed in Hanover Park that weekend. Across the whole of Cape Town metro the toll was 16, a relatively low-key few days. Weekend shootings can number in the forties – often related to gang and drug-related crime.

That level of homicide makes Cape Town the 11th most violent city in the world.

In response to the public clamour for action, an army infantry battalion was dispatched in June for an initial three-month deployment to support police in the city’s ganglands, a deployment that has since been extended to the end of March 2020.

The troops support the operations of the much-maligned police in the township suburbs of Manenberg, Delft, and Hanover Park – areas that still retain their apartheid-era levels of disadvantage.

But the soldiers are seen as heavy-handed: unable to distinguish gangsters from civilians, they tend to treat every young man as a suspect.

“The army is just a show of force. They are transgressing rights to make [a political] impact,” said Community Policing Forum chair Ibrahim Abrahams, whose NGO was initially in support of the army deployment.

Gang culture has deep roots in the Cape Flats – the dumping ground for a mass eviction programme that 50 years ago drove anyone not white from the city centre under the apartheid Group Areas Act.

Don Pinnock, a criminologist at the University of Cape Town, wrote in an article for The Conversation how extended “networks of kin, friendship, neighbourhood and work were destroyed”, and in the new depersonalised housing schemes “social control over the youth was lost”, leading to a rise of far more violent gangs. 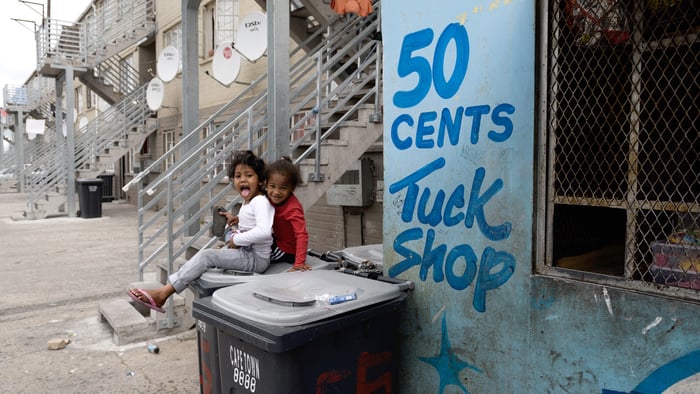 Guy Oliver/TNH
Children playing in Hanover Park. The Cape Town suburb is a hot spot for city gangs, and residents are routinely maimed and killed by crossfire between rival gangs.

Wesley, 40, was driven to the gangs by thoughts of revenge against his older step-brother, who would routinely beat him on returning from the bars at night. At the age of 12, he joined the Ghetto Kids, and with the gang’s protection bashed his step-brother with a steel pipe.

He rose to become the “right-hand man” of the gang's leader. During his 18 years as a gangster, he says as many as 30 of his friends were killed.

Part of the gang’s rationale for membership, he told TNH, is that they “protect the community”. If that was once the case, the relationship has since unravelled.

“Communities, which may have been more tolerant of youth gangs in the past, have become increasingly frustrated as gangs have transgressed long-held codes that limited gang violence and victimisation,” noted analyst Christopher Morris in the progressive journal AIDC.

The response in Hanover Park is both a fear of the gangsters, but also disdain. It is the courage to leave a gang that now wins admiration.

“The community knows your story and knows your past and respects you only when you have turned around,” said Wesley. “They do not judge you anymore.”

There are local initiatives that aim not only to stop the violence, but also to help the gangsters to quit.

Ceasefire, an NGO that borrows from a US model of community-based “violence interrupters”, has been operating in Cape Town since 2013.

Founded by Pastor Craven Engel, it draws from the ranks of reformed gangsters to nip trouble in the bud before it gets out of hand.

The focus, Engel explains, is to remove the “transporters of violence” – the gunmen – using a demobilisation and reintegration playbook more commonly adopted for more conventional conflicts.

The 17 interrupters operating in Hanover Park were selected for their skill-sets and experience. “They have to be credible in the community; they must have changed their lives,” said Engel. “They must understand prison culture, gang culture, and the gangs must respect them.” 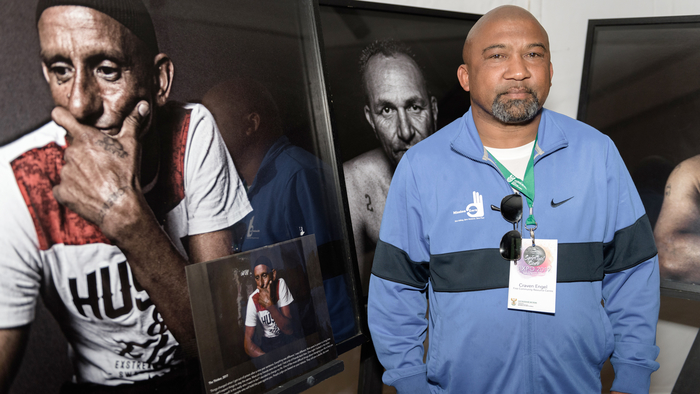 Guy Oliver/TNH
Pastor Craven Engel stands next to portraits of “interrupters”. He uses former gangsters as mediators and negotiators to reduce gang violence in Hanover Park.

But Ceasefire has been hobbled by a funding cut by the city. It continues only on a voluntary basis, its conflict negotiators unpaid, balancing making ends meet for their families with their street work.

Samuel, 47, is an interrupter who quit the gangs after a 35-year span with the Americans and the prison gangs. He knows others looking to escape the codes and rituals.

“You can see gangsters who want to get out,”  Samuel told TNH. “You can see it on their bodies. They are tired of the life.”

Engels claims the programme has rehabilitated 168 “high-risk” gangsters, but that success is disputed by other community leaders.

“If Ceasefire is so good, why did it end?” noted Abrahams of the Community Policing Forum. “Everyone is in their own silo trying to fight gangsterism. There must be a collective approach.”

Reform of the judicial system has also been urged – both in terms of sentencing and policing.

Delano Cole van der Linde, a lecturer at North-West University, argues that the sentencing for gang-related crimes is weak – usually between three to six years with an option of a fine, with low sentences typically handed down to gang leaders.

They are “ineffectual in deterring gang members and are also too short to disrupt the organisational structure of the gangs”, he wrote in The Conversation in July last year.

The additional problem is poor policing. The Western Cape’s standing committee on community safety reported in 2018 that the province had the country’s lowest police-to-population ratio, with 85 percent of its 150 police stations understaffed.

Moreover, the police are widely viewed by the gangsters as corrupt accomplices.

Lamb notes in his 2018 report that a police investigation found that between 2010 and 2016, illegally supplied police weapons were responsible for some “1,066 murders, of which 231 were child victims”.

A Cape Town gang lord, speaking on condition of anonymity, told TNH it has been a longstanding practice – since apartheid days – for police to seize drugs and then sell the narcotics to a rival gang.

But Samuel remains optimistic that change can happen.

“People always encourage and support you not to go back. You know why?,” he said. “I was a nightmare in my community. You become a dream for people, and they don’t want the dream to go away. As this is what our children [in gangs] can become.”