This article is part of our in-depth coverage. Read more like this...
BULE HORA, Ethiopia

In a hotel dining room in the southern Ethiopian town of Bule Hora, a group of young Ethiopians pin drawings of trees to the wall. Each tree, they explain, represents one of them – some of them ethnic Gedeos, the rest Guji Oromos – and together they make up a forest, symbolising their multi-ethnic society.

The group call themselves “peace ambassadors”, and they are leading the way in putting a fractured and traumatised society back together again.

“The forest represents our unity,” says one, a murmur of assent rippling through the room.

But fostering reconciliation and rebuilding peace, when memories of violence remain so fresh, will take more than well-meaning workshops.

It is now more than a year since, according to official estimates, up to one million Gujis and Gedeos were left homeless after ethnic violence broke out. Reconciliation, despite the deep blood and cultural ties between the two communities, is proving a long and fraught process.

Whole families, the majority of them Gedeo, were chased from their lands by armed gangs who torched farms, looted properties, and beat, raped, and murdered civilians.

It was the largest single displacement in a year in which nearly three million people nationwide were forced from their homes, as ethnic and land-fuelled conflicts exploded across the country following the softening of the ruling party’s authoritarianism when Prime Minister Abiy Ahmed came to power last April.

Six months ago, the Ethiopian government sent almost all of these internally displaced persons (IDPs) back to their old villages, despite fears for their safety, as part of a massive campaign to reduce the IDP caseload. Today, it claims that less than 100,000 remain throughout Ethiopia – though aid workers have questioned those figures.

In Kercha, the West Guji district where the bulk of the violence occurred, the conflict’s scars are still visible. Makeshift shelters with tarpaulin roofs mark the spots where, according to the government, at least 21,000 houses were burnt or torn down. 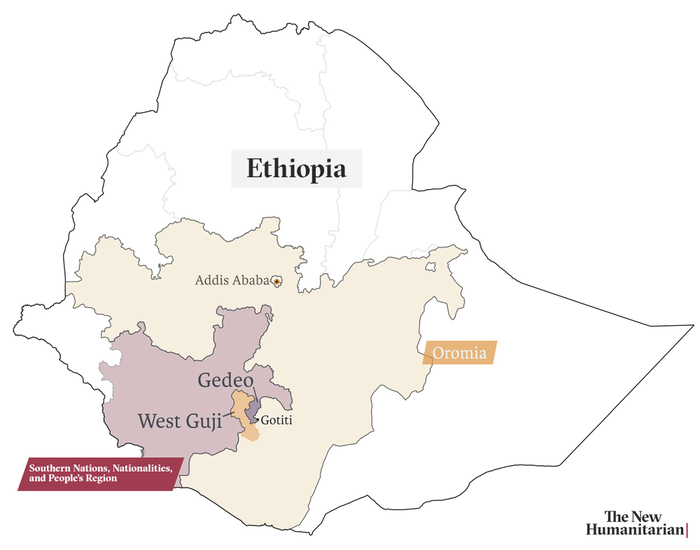 West Guji, part of Oromia, is a spit of land extending into the Gedeo Zone in the Southern Nations, Nationalities, and Peoples' Region. Violence between Oromos and Gedeos last year forced one million mostly ethnic Gedeos to flee West Guji.

A heavy presence of local militia and special police patrol the streets, and many locals, as well as returnees, still rely on food handouts as much of last year’s harvest was abandoned or destroyed.

‘Everyone is regretting what they did’

But there are welcome signs of progress, too.

About 130 peace ambassadors are now dotted across 13 districts along the border between Gedeo and Oromia’s West Guji. These young men and women, all volunteers, hold meetings and workshops in their villages, hoping to restore trust between the two communities.

“I teach them the values of living together, values which were degraded or lost during the conflict,” said Dubi Lema, who works at the Environment, Climate Change, and Forest Authority in Kercha Town, and in his free time helps reconcile his neighbours.

“Now relations are so good – everyone is regretting what they did,” she told The New Humanitarian. “It’s very peaceful.” 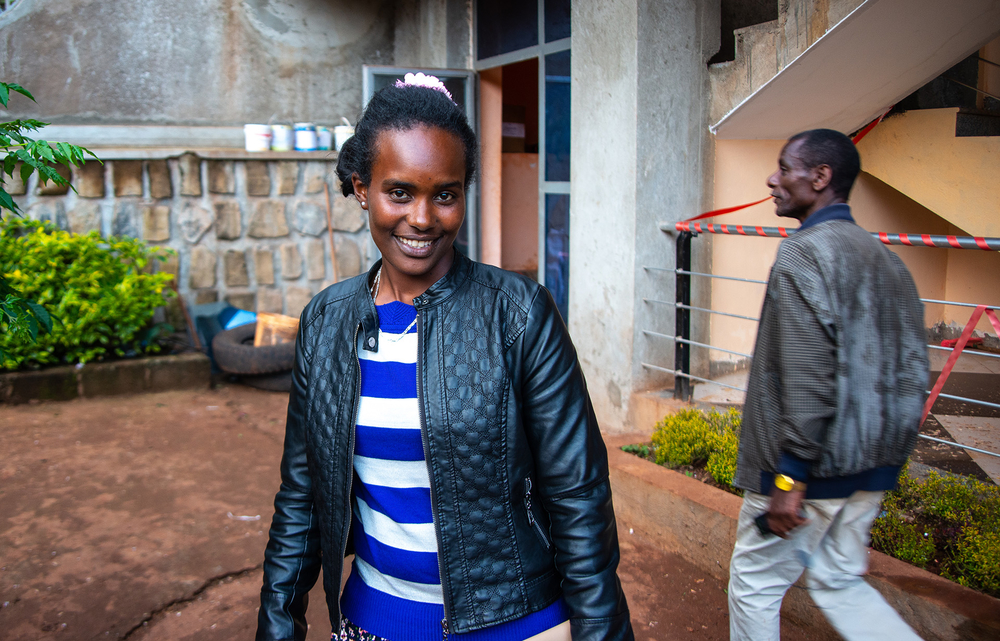 Ambassadors like Dubi and Imnet are helping to support the work of local officials, who for the last few months have been organising regular peace meetings between the two ethnic groups.

They are supported and trained by the Catholic Relief Services, an international NGO, which, like other aid groups, was prohibited from engaging in reconciliation work until after Abiy took office last year.

“In our zone, there is no peace problem now,” said Abera Buno, the top official in West Guji. “The IDPs have come home, and they are rebuilding their lives.”

He told TNH that the local government is planning to build a “peace training centre” on land at the border between Gedeo and West Guji.

Meanwhile, local elders known as Abba Gadas are setting up “peace committees” in each kebele or village district. Some of the young ambassadors are organising football teams or church choirs of mixed ethnicities, and Dembela Muleta, head of the disaster risk management office in Bule Hore, said the government is introducing “peace clubs” in schools.

Almost all those interviewed by TNH on both sides of the Gedeo-Guji border, in districts which have long been multiethnic, said children were back to attending the same schools and people were once again socialising with neighbours from the other ethnic group, drinking coffee and eating meals together as they had done in the past.

The approach to peace and reconciliation is notable for its emphasis on traditional institutions common to both groups, such as the Abba Gadas, and on forgiveness before accountability.

“Now we have peace, there is no need to revisit the past – we advise people to move forward and to forgive whatever happened before,” said Takele Sereka, an Abba Gada in Kercha Town. 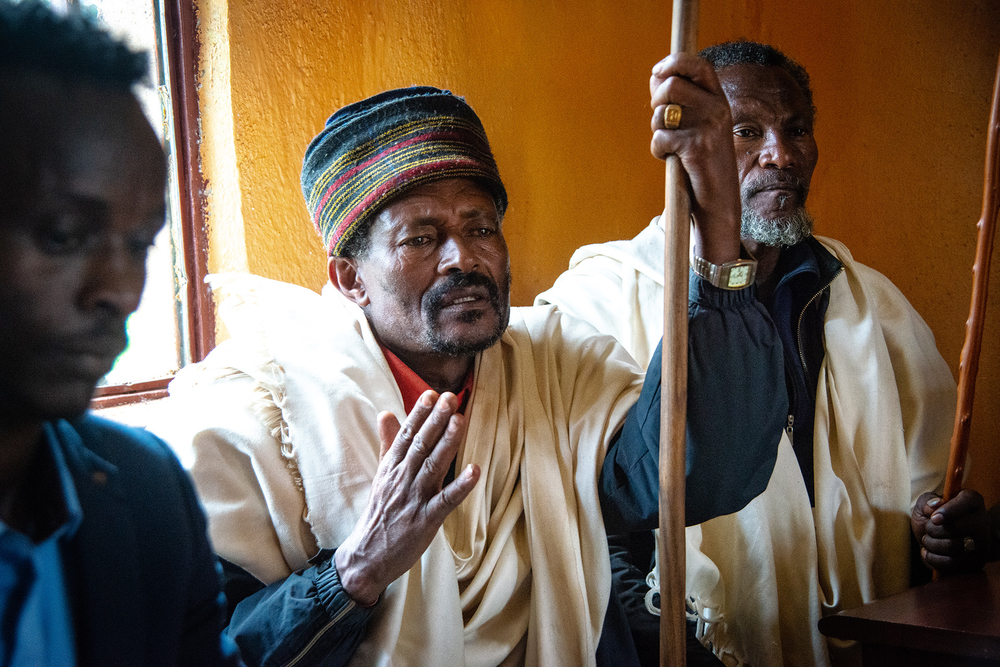 Publicly, the government says it is holding people to account for the violence. In April, Abiy said 300 people had been arrested for their suspected involvement. Around the same time, the West Guji police chief said 89 people had been given prison sentences for instigating killings and evictions.

But, on the ground, the reality seems different.

Buno, the top West Guji official, said those arrested had not yet been sentenced.

The head of the local militia in Magala village, Ebisa Elema, said nobody in his badly affected district had been arrested for involvement in ethnic violence, and none of the returnees interviewed by TNH said they were aware of any arrests or prosecutions in their neighborhoods, either.

“The government advised us to excuse everybody and to forget about the past,” said Atnafu Bali, a Gedeo returnee near Kercha town.

Some believe this approach is sensible in a society where formal state institutions are not widely trusted, and where violence is often politically motivated as well as simply criminal.

“Court litigation is a kind of win-lose approach,” said Gelchu Jarso of Bule Hora University, who is helping lead the peace process. “Reconciliation through indigenous institutions is much better.” 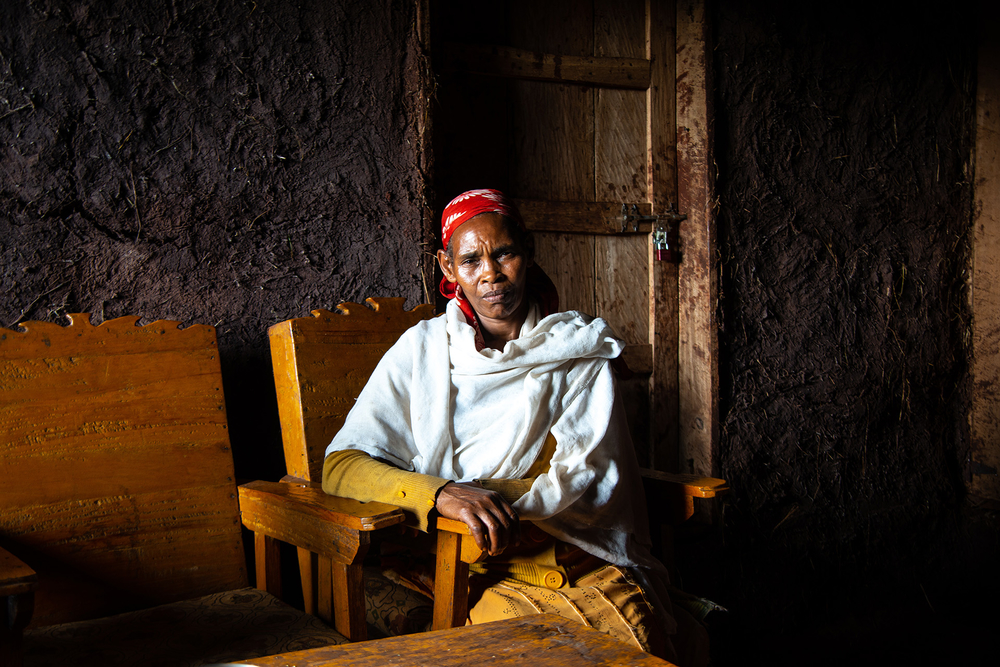 Tom Gardner/TNH
Mari Lole, a mother of nine, and Gedeo returnee, in her rebuilt home in Magala village, West Guji.

But relying on traditional institutions, such as the Abbas Gadas, has not always proven effective.

In the months after the conflict first broke out in 2018, the government organised several high-level peace meetings led by Abbas Gadas. Violence resumed shortly afterwards.

“These days, the youth do not listen to the elderly people,” said Dagne Shibru, an expert on Gedeo-Guji relations at nearby Hawassa University.

He also noted that reconciliation customs shared by the two communities in times of conflict have been weakened in recent years by the rapid spread of Pentecostal churches, and that the Gada system had itself been undermined by perceptions that it was “politicised”.

Takele, the Abba Gada in Kercha, admitted that once the conflict started the Guji youth simply stopped obeying their elders. “They said to us: ‘No, we cannot tolerate this again’.”

There are other signs that, beneath the surface, the peace here is a fragile one.

One is ongoing land disputes, the root cause of the conflict.

“It is known that the Gedeos are claiming land,” said Gedecha Wako, another Abba Gada in Kercha, before his colleague Takele asked him to drop the subject. “The issue started with Gedeos claiming the area – they said the land belongs to their region.”

As violence escalated, many land certificates were either lost or destroyed as houses were burnt. And, for some returnees, proving ownership can be difficult since many lacked documentation in the first place, including personal identification cards.

The local government has set up legal aid clinics and a working group to support people who do not have documentation, which it said had dealt with roughly 10 percent of more than 500 cases so far.

But in some villages officials demanded high fees for reissuance of documents. In one it was reported by returnees that their land had been sold by local authorities without their knowledge.

Daniel Robe in Magala village told TNH privately over the phone – after first being interviewed in front of some neighbours – that he had returned to find his land occupied. He took his neighbour to court but still not all of it has been returned to him.

Italem Demsew, a 25-year-old peace ambassador from Gedeo zone, said that when some of her relatives returned to West Guji they were told they had to pay their neighbours, who had been living in their home, a “protection” fee to have it back again.

Incidents like these were relatively common, according to humanitarian organisations working in the area.

“I don’t think anything has changed in terms of how the two perceive each other,” said an aid worker with international NGO, who asked to remain anonymous. “Remember: they lived together for decades and then this happened overnight.”

Another concern among aid workers is that in most districts on the West Guji side, Gedeos are no longer represented in local kebele governments or militias.

But Gelgelo Genene, a peace ambassador, was – like all his colleagues – guardedly optimistic about prospects for lasting peace between the two communities.

He pointed out that his father has three wives – two Gedeos and one Guji – and 30 children.

“We can’t separate even if we wanted to,” he said.