Read about what we achieved.
NAKE/Cameroon

On the eve of Cameroon’s presidential elections, the country is divided. But not simply because of the vote on Sunday.

What began in 2016 with activists from the anglophone minority stepping up their campaign for autonomy led last year to the government violently clamping down on separatist protests in the majority-anglophone Northwest and Southwest regions.

The crisis has since escalated, with hundreds of villages now largely destroyed, and tens of thousands of people forcibly displaced from their homes, many of them now living in makeshift tents in the jungle with no healthcare and little food.

The UN estimates that more than 246,000 people in the Southwest region have been internally displaced, while at least 25,000 have fled to Nigeria.

With no homes or livelihoods to go back to in their conflict-torn rural regions, many displaced people are heading for the cities, only to end up begging on the streets with no place to stay.

“Why is the government and the world treating anglophones this way? Were we born to suffer, to be killed like animals?” asks Daniel Teke, who has fled for the city like many friends and relatives but is barely getting by in Cameroon’s economic capital of Douala.

The francophone government has promised Sunday’s vote will be calm, but the conflict, now a full-on armed rebellion, casts a long shadow over the poll.

In the face of the deepening humanitarian crisis and rising international pressure, the government argues that it is quelling a vicious insurgency and denies allegations of systematic human rights violations by its security forces. It says it is open to dialogue, but this has not happened yet.

Paul Biya – the 85-year-old president who has ruled the country for 36 years – is standing for re-election again. Opposition candidate Joshua Osih, who hails from the anglophone west of the country, recently blamed Biya for the bloody separatist crisis. “He is solely responsible,” Osih said.

Biya’s government insists the unity of Cameroon is “non-negotiable”.

Amid reports that displaced Cameroonians, including those who fled into neighbouring Nigeria, will be unable to vote, the International Crisis Group has also warned about the higher risk of violence, with tensions increasing as election day approaches.

“There is nothing there, and bullets will kill us."

Enow Abrams Egbe, chairman of Elections Cameroon, the main election body, on Wednesday called on displaced people to return home and participate in the elections, emphasising that arrangements would be made to ensure voting takes place in the anglophone regions.

However, voters here will struggle to reach ballot boxes as many IDPs live in makeshift shelters in remote areas and armed separatist groups have vowed to stop the election and threatened those who would participate.

“We cannot go back”

Lodged in her temporary safe-haven in the jungle, Mary Etom isn't far from the remains of her village, Nake, in Southwest region – it’s a 30-minute trek down twisting roads. But for more than eight months she has been unable to return.

In the panic, she gathered their two daughters and dashed for the safety of the forest, with more than 100 other families. For two days they slept in the open air without food and water, finally setting up shelters of wood and grass. 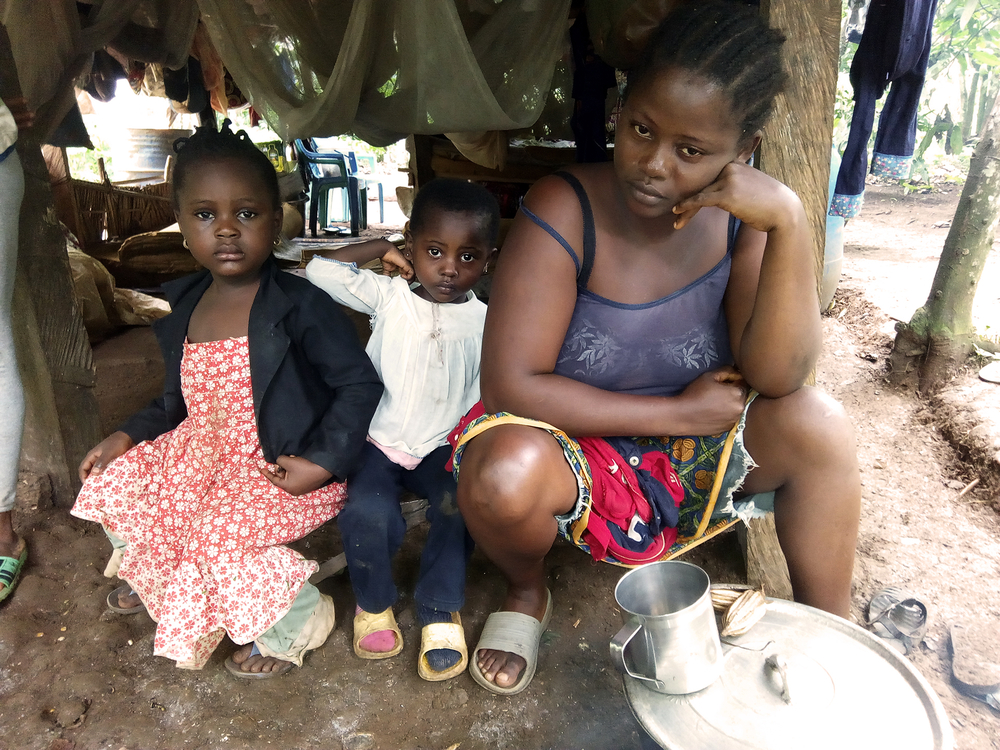 Arison Tamfu/IRIN
Mary and her two daughters, Ruth and Righteous.

"We cannot go back to the village now,” Etom says, twisting the ring on her finger. “There is nothing there, and bullets will kill us." Her daughters, Righteous, five, and Ruth, two, sit beside her with solmen gazes. “They don’t even know their father is dead,” Etom adds.

She shares the shelter with four other families, 24 people in total. Her neighbour Esther Kundu shares hers with 70 others. At night 14 children squeeze onto one messy mattress, while others sleep on the cold floor.

No hospital for the sick

In the forest near Kwakwa, a neighbouring village to Nake, Enyong Thomas perches on a bamboo lawn chair. “A lot of people are dying,” he says.

A middle-aged man standing behind him interrupts. “Children are falling sick in the bush,” the man says. “There is no medicine to give them. Three days ago, we buried 11 people who died in the bush.”

Overall toll statistics are unreliable, but NGOs say at least 400 civilians have lost their lives since the conflict began. Additionally, clashes between security forces and the separatists have left 170 soldiers dead, but no data exists on the number of separatists killed. The villagers in this part of Southwest region estimate they alone have lost at least 60 people since fleeing their homes.

“Many people die because they cannot go to the hospital,” says Pascal Esona, who limps and uses crutches. He says he was shot in the leg by a stray bullet on the day the villages were raided. 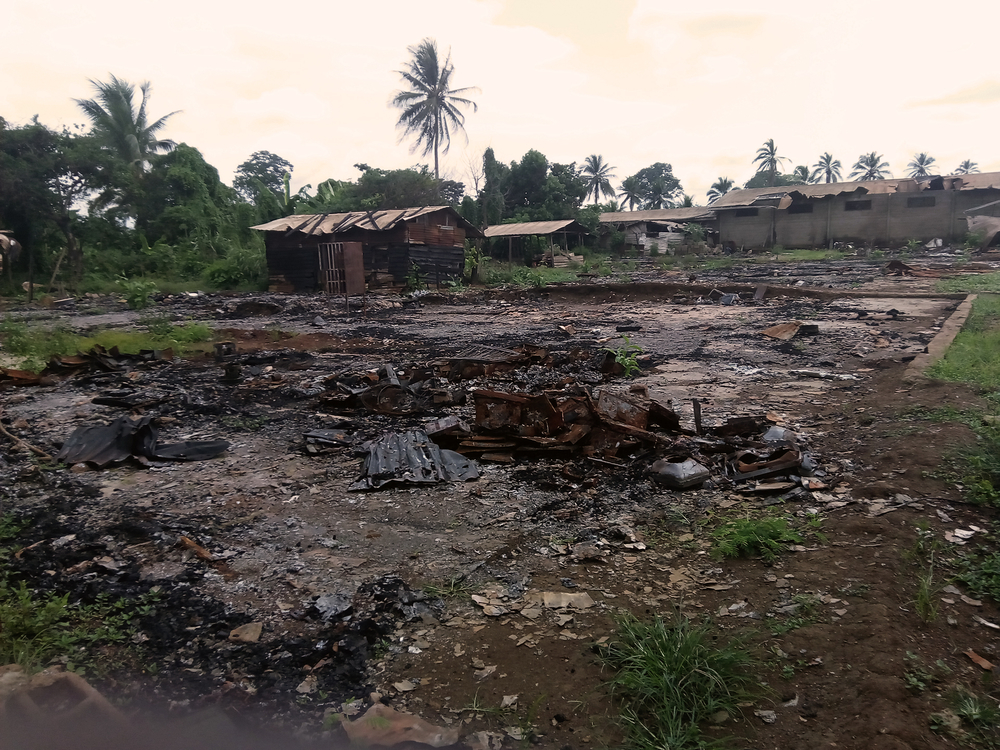 “I have not been to the hospital since I came here because I am afraid,” Esona says. “Many people have been shot in the hospital simply because they went to treat themselves.” Several villagers told IRIN they had witnessed these shootings, but they could not be independently confirmed.

Together with international partners, a small women- and youth-focused NGO called Reach Out Cameroon conducted research and found the IDPs suffering from severe untreated injuries, rashes, diarrhoea, and typhoid; children with malnutrition; women with post-natal complications; and malaria rife.

“Eighty percent of displaced persons are not getting the healthcare they require,” says Omam Esther, executive director of the organisation, which is based in Buea, the capital of the Southwest region.

Esther says continuing violence and displacement has prevented the government’s regional health delegation from carrying out even basic operations – including immunisation, antiretroviral drug dispensation and distribution of malaria nets – in 15 of the 18 districts of the Southwest region.

And humanitarian groups have also had difficulty gaining access to the restive regions. “Many have not been able to secure administrative clearance to operate in the Southwest,” she says, adding that Reach Out Cameroon has only been able to assist about three percent of people in need of aid.

“The needs are far greater than the resources we have,” she says.

This lack of access to healthcare is especially worrisome for nursing mothers and pregnant women. Sakwe Margaret breastfeeds her two babies in a shelter near Etom’s. On 6 January, when the security forces swooped into her village, she was heavily pregnant. She recalls struggling in pain to escape the bullets and reach the bush. The following day, she gave birth to triplets.

“[A] few days after delivery, one of the children died due to starvation and lack of medical care,” she says, putting the babies down on a filthy mattress. “I fear to go to the hospital.”

“A solution is needed urgently”

In June this year, the government launched the distribution phase of a 19-million-euro humanitarian assistance plan for displaced people in the anglophone regions. Interior Minister Paul Atanga Nji recently supervised the arrival of a consignment of food and other basic commodities destined for the IDPs.

However, many of the displaced people IRIN spoke to, especially those living in the jungle, say they are not ready to accept anything from the government.

“They are killing us and want to give us food?”

“They are killing us and want to give us food?” asks Magdalene Ageawu, who lives with her three children in a makeshift camp. “We can’t accept their gifts. They want us to go back to where? Our houses were burned by the military.”

The government has been urging IDPs to return home.

Speaking recently at a meeting to discuss the anglophone crisis in Buea, Governor Bernard Okalia Bilai of the Southwest region said: “We are inviting the elites, traditional rulers to come back and continue to work and sensitise their children, especially those who have been misguided and are now in the bush, for them to return home.”

Many of the displaced have shown little interest in returning, however. “More than 80 percent of the IDPs do not want to go back home because of what they have experienced,” says Ebenezer Nkegoah, from the Foundation for Inclusive Education, which recently conducted a census among IDPs in the city. “A [political] solution is needed urgently, not gifts,” he adds, referring to the government’s aid efforts.

There is often little to go back to and livelihoods are hard to come by in the rural regions. Reach Out Cameroon estimates that hundreds of villages have been destroyed by the warring factions or abandoned due to the conflict.

“This world is wicked,” says Mukete Samuel, a traditional council leader for Nake village. “Where is the United Nations and the rest? So we will all die here in the bush before they look for a solution?”