Standing on the second floor of his ruined home, Salah AbuBaker gazes out from blown-out walls across the sparkling Mediterranean Sea.

A year and a half since so-called Islamic State was ousted from Sirte, his property is half rubble, his mother’s downstairs bedroom piled high with sand and soil where the militants dug underground tunnels.

Once the Libyan “capital” of IS, this city became infamous in February 2015 when the group filmed an execution of 21 people on a nearby beach. In AbuBaker’s house, walls of rooms emptied of furnishings are covered with graffiti, first from IS fighters, then over-scored with victorious scrawls by Libyan soldiers. 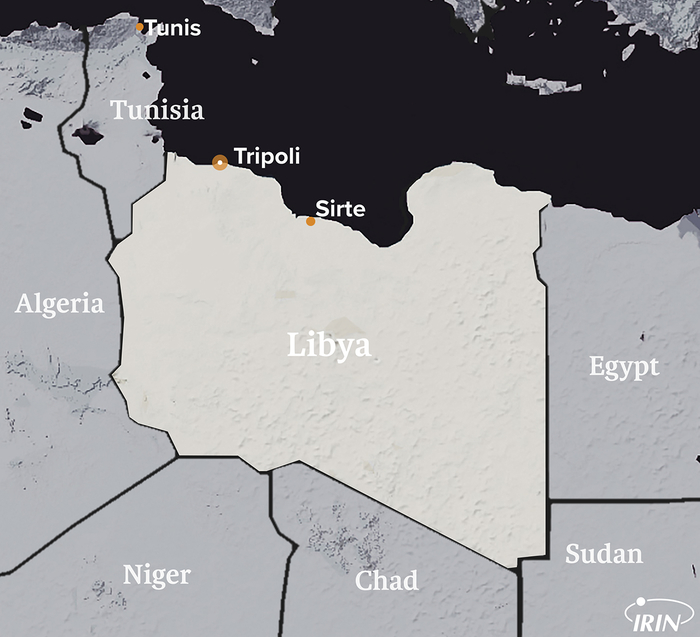 Behind his house, the streets are lined with more crumpled houses and bullet-ridden shipping containers turned into barricades. The once densely populated centre of Sirte, which used to have an overall population of 150,000, was so fiercely defended by IS that it took Libyan forces three months to liberate it, leaving behind utter destruction.

There are still skeletons amongst the rubble, mines and unexploded ordnance have not been cleared, and 3,000 people are registered with local authorities as homeless.

Most of the people displaced from the city centre, like AbuBaker, are living in rented homes elsewhere in the city, unable to return home. According to the UN, 20,000 people are displaced in the city as a whole, and more than half of Sirte’s residents are still shuttling between temporary residences and their homes, while they rebuild. The three central districts of Campo (where AbuBaker’s house is), Giza, and Sirte 3 remain empty.

Sirte has struggled to rebuild before, after extensive fighting in the 2011 uprising against Muammar Gaddafi, who was born nearby and killed here. This time around, the destruction is worse. Yet locals say they’ve had even less help from Libya’s competing governments and the international community.

After 2011, “the Americans came… and said they wanted to compensate us and help with the reconstruction,” says AbuBaker. Although some money was then disbursed to Sirte residents, he believes Libya’s first post-2011 interim government blocked help, and he says only a few people received compensation for their ruined homes.

AbuBaker wonders why the world, now, is even less interested: “We want to know why the international community wanted to help us back in 2011, but not after 2016." 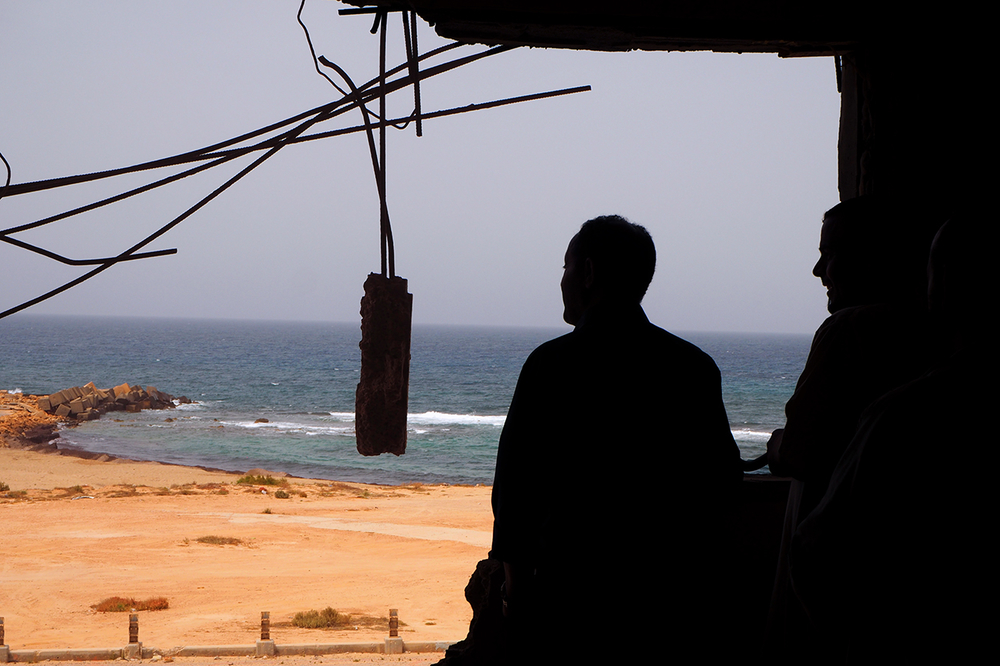 Tom Westcott/IRIN
IS made Sirte's Mediterranean beaches infamous with when they filmed an execution on a beach near AbuBaker's house.

Starting from zero with little help

Successive faltering Libyan governments saw Sirte as a Gaddafi stronghold, and neglected to intervene as security deteriorated after 2011. Even before IS declared full control of Sirte in early 2015, residents had limited access to aid because of the extremist elements the city attracted.

A local tribal elder, speaking on condition of anonymity, says Ansar al-Sharia, the Libyan al-Qaeda affiliate, came to prominence in 2012, and aid organisations that had been working in the area moved their offices elsewhere.

“Most help and support stopped being sent from late 2012 and early 2013 because people were scared,” the elder says – a situation made worse after 2014, when Michael Greub, an aid worker from the the International Committee of the Red Cross (ICRC), was killed in Sirte.

The UN and other major aid agencies are still active in Libya – often through local partners – and the UN’s refugee agency, UNHCR, said in a recent report that in the past few months it had given streetlights, waste management items, and supplies to schools and clinics in Sirte.

Working with the UN-backed Government of National Accord (GNA), the UN Development Programme has allocated $7.6 million to Sirte for 2016-2018 to rebuild critical infrastructure. As of the last publicly available update in June 2017, UNDP said it had provided ambulances to hospitals and rehabilitated one school (although eight total are planned).

Despite this help, many in Sirte say they are disappointed. After years under Ansar al-Sharia and then IS, residents had high hopes 18 months ago. Now, they feel a creeping and, they say, familiar, sense of neglect. 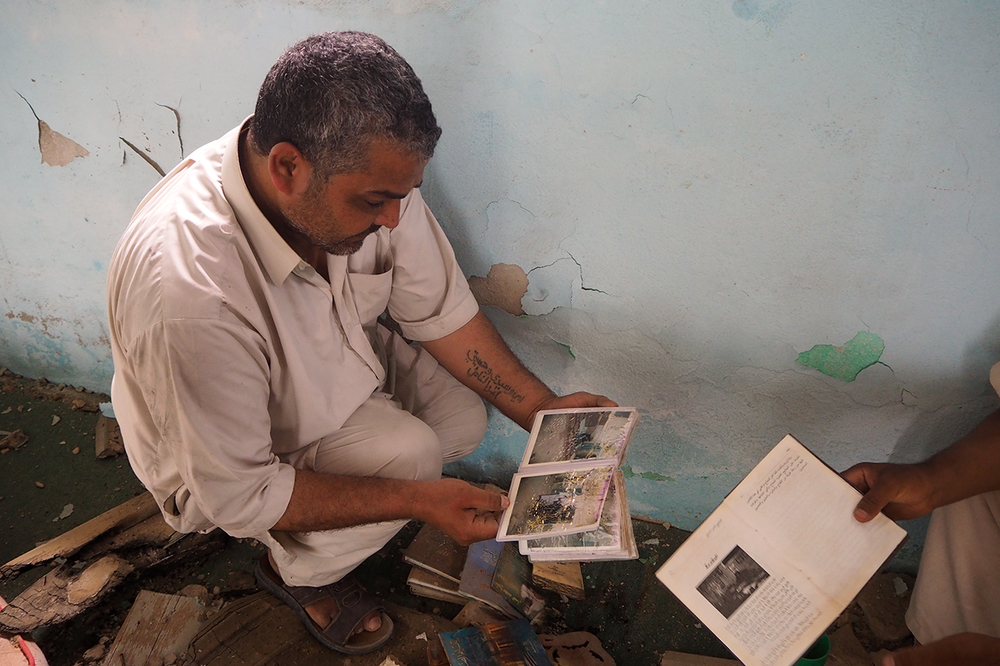 Tom Westcott/IRIN
Bashir Bonaiss finds a ruined album of family snapshots in one of the two rooms that are still standing in his Sirte villa.

Locals like Bashir Bonnaiss take pictures of their homes, hoping if they document the destruction they’ll eventually receive compensation from someone.

Stepping through grass that has sprung up amidst the rubble of his villa in Campo, where only one small room and a toilet still stand, Bonnaiss says he and his neighbours “come back [from their temporary accommodation elsewhere in Sirte] to look, take photos, and make reports about our situation for the government and international organisations, although we’ve not had help from anyone so far.”

He picks through all that is left of his former life – a charred copy of the Quran, a handful of books, a child’s bag, and an album of mottled family photographs.

As Bonnaiss emerges from the rubble, a passing man shouts that unexploded rockets are in the garden, now hidden by the grass.

Sirte police officer Bashir al-Gaid, whose extended family lost all three of their homes, says no Sirte resident has yet received compensation or financial support for rental costs or rebuilding from the government in Tripoli under whom the Libyan forces fought IS in Sirte.

“We’ve had nothing from anyone,” he says. “A committee [from the GNA] came here and took photos and made promises, but that was a year ago and we’ve still received nothing.”

Earning 500LYD (around $360 per month), al-Gaid is one of the more fortunate in Sirte. But his salary barely covers the rent. “Whenever I’m not at work, I go fishing in the sea, to feed my family,” he says. 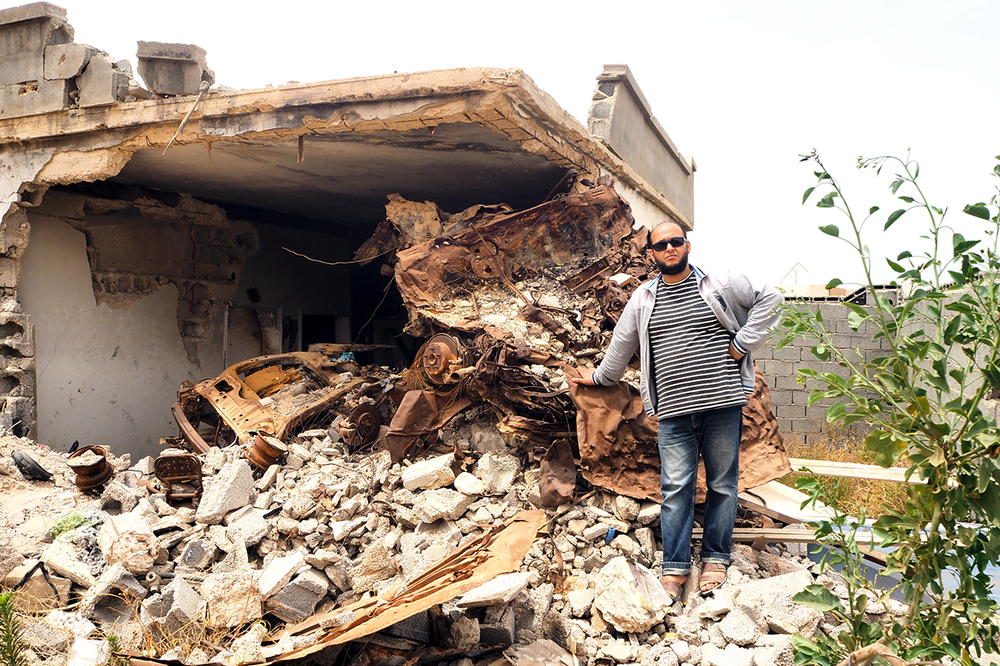 Tom Westcott/IRIN
With his Sirte home in ruins, Issa Arhuma and his family now sleep in a shack built for animals.

Former resident Issa Arhuma, 39, struggles to pay the rent on the corrugated iron-roofed shack built for animals where he now lives with his wife and three children in a Sirte suburb.

He estimates that more than 1,200 houses were destroyed by fighting in Sirte’s three central districts: Campo, Giza, and Sirte 3 (a senior local official told IRIN that 3,000 Sirte residents are still missing and remain unaccounted for).

Gesturing hopelessly towards his yard in Giza, towards charred sticks that were once trees, Arhuma says: “I built this house myself, and the garden was full of trees and animals and now look at it: it’s finished and everything’s dead.

“We were so happy to come home after liberation [in December 2016], thinking about our future, our house, and thinking we’d have a good life; so we were very shocked to find everything destroyed.”

The destruction is so severe that most residents assume central Sirte will have to be razed and rebuilt. But there’s more work to be done before that process can begin, including clearing the skeletons of IS fighters that still lie in the open, lodged on broken staircases or beneath collapsed roofs. 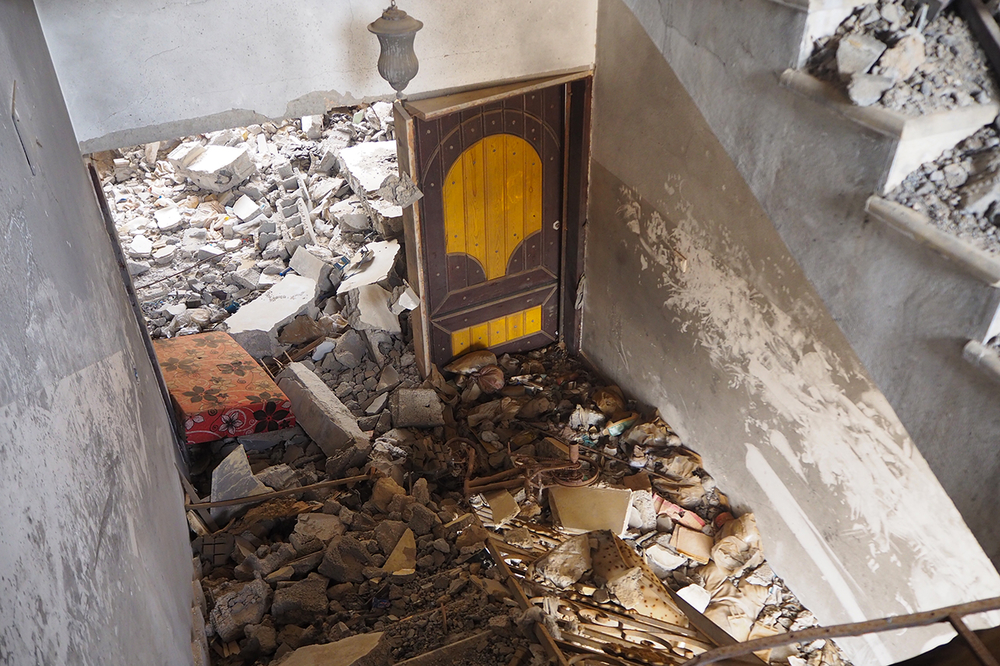 Tom Westcott/IRIN
A damaged stairwell in central Sirte, at the top of which are the skeletons of two IS fighters (not pictured).

The Misrata Red Crescent, which was tasked with removing corpses from Sirte, says they have completely cleared the town. But IRIN saw several corpses, including one in military fatigues.

Residents aren’t sure who is responsible for taking the bodies away. Bonnaiss says an organisation claiming to be the Red Cross had taken DNA samples from all the IS bodies. “But they didn’t take away the corpses,” he says, adding: “No one has.” The International Committee of the Red Cross says it isn’t currently conducting any forensics work in Libya, but is supporting Libya’s capacity to do this work.

It’s not only bodies of IS fighters that were left behind after the Sirte battle. Bonaiss shows IRIN a mound of earth where he and other returning residents buried 17 young men in a mass grave. They appeared to have been lined up and executed in the garden, and he speculates that they were killed for refusing to fight alongside IS.

Al-Gaid, the policeman, found the corpses of a women and three children in one house. He says that for the first year after liberation the smell of the corpses was almost unbearable. The smell has diminished over time, but he says returning residents are still distressed to find skeletons in their homes. Al-Gaid says some swear they’ll never return again, believing their homes to be haunted.

The bodies are distressing, but remnants of war are an even greater barrier to returning home. IS relied heavily on IEDs and landmines, and the three central districts are littered with unexploded ordnance.

“This area is very dangerous because it still hasn’t been de-mined, and we urgently need engineers here,” says al-Gaid in Sirte 3, picking up an unexploded grenade before casting it carelessly aside. 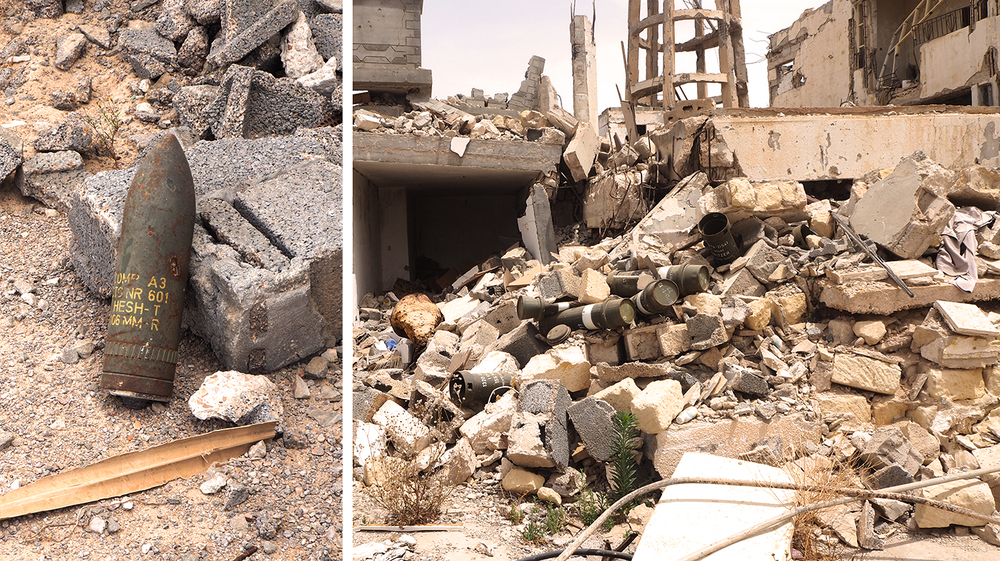 Tom Westcott/IRIN
Unexploded ordnance litters homes and roads in the three Sirte districts worst damaged during the 2016 battle against IS.

Al-Gaid says Libya’s overstretched de-mining organisations, which lost many engineers in the 2016 conflict, only had the resources to clear the residential areas civilians are actually returning to, and have been unable to undertake the huge task of clearing Campo, Giza, and Sirte 3.

The UN Mine Action Service, UNMAS, says it is assisting the Libyan authorities and other partners with IED clearance in Sirte and says there is an “emerging and expanding threat from IEDs in Libya”.

In October 2017, then-British Foreign Secretary Boris Johnson mentioned a group of private UK investors with “a brilliant vision to turn Sirte into the next Dubai. The only thing they have got to do is clear the dead bodies away.”

These remarks both offended and concerned locals who worried that they might never get their homes back (although the British Foreign and Commonwealth Office told IRIN that Johnson's comments referred to a proposal by an independent management consultancy to create a free zone in Sirte, not to any British government plans).

For Arhuma in his rented animal shack, or for AbuBaker who has IS tunnels under his wrecked home, this vision of Sirte as some kind of new Dubai can’t seem further away from reality.

“There was nothing, not one single stick of furniture we could recover from our house, and we had to start from zero,” Arhuma says, speaking from the tin-roofed structure that  is now home to his family. “We have to beg local charities for milk and nappies. There’s nothing left. We are finished.”