Days after President Nicolás Maduro’s election victory on Sunday, most Venezuelans continue to face what has become their new normal: shortages of food and medicine, infants dying of malnutrition, rising crime, and collapsing infrastructure. Experts warn that Maduro’s new six-year term could bring the country – which boasts the largest proven oil reserves in the world – greater international isolation and economic mayhem, including fresh US sanctions, debt defaults, worse hyperinflation, and political violence.

For countries elsewhere in Latin America, especially Brazil and Colombia, that means feeling the reverberations of Venezuela’s economic meltdown even more strongly as thousands more families are displaced throughout the region by hunger and scarcity.

“President Maduro did not offer any credible plan for restoring economic growth during the campaign,” says Harold Trinkunas, Latin America expert at Stanford University. “The displacement crisis is likely to accelerate and humanitarian needs, both in Venezuela and in countries receiving displaced Venezuelans, will increase.”

According to the International Organization for Migration, one million Venezuelans fled the country from 2015 to 2017. Hundreds of thousands more left in the first three months of this year. Between 3,000 and 5,000 are still leaving every day, according to UN estimates. Some have been fleeing south to Boa Vista in Brazil, down more than 200 kilometres of road dubbed the “Hunger Highway”, but the majority take the shorter route out, to Colombia.

On the Simón Bolívar International Bridge that straddles the border to the Colombian town of Cúcuta, the enormous scale of Venezuela’s dysfunction is clear. Each day, an estimated 50,000 Venezuelans enter across the bridge, while others come in illegally through clandestine tunnels.

Many are day-trippers, sourcing supplies or viable currency to take home, but others are displaced families hauling bundles of luggage, looking for new lives. Some have money saved and travel on towards Colombian cities, towns, and villages, hunting work and stability. But others cross with nothing but the clothes on their backs, forced to live precariously, hustling an existence on the humid streets of Cúcuta. 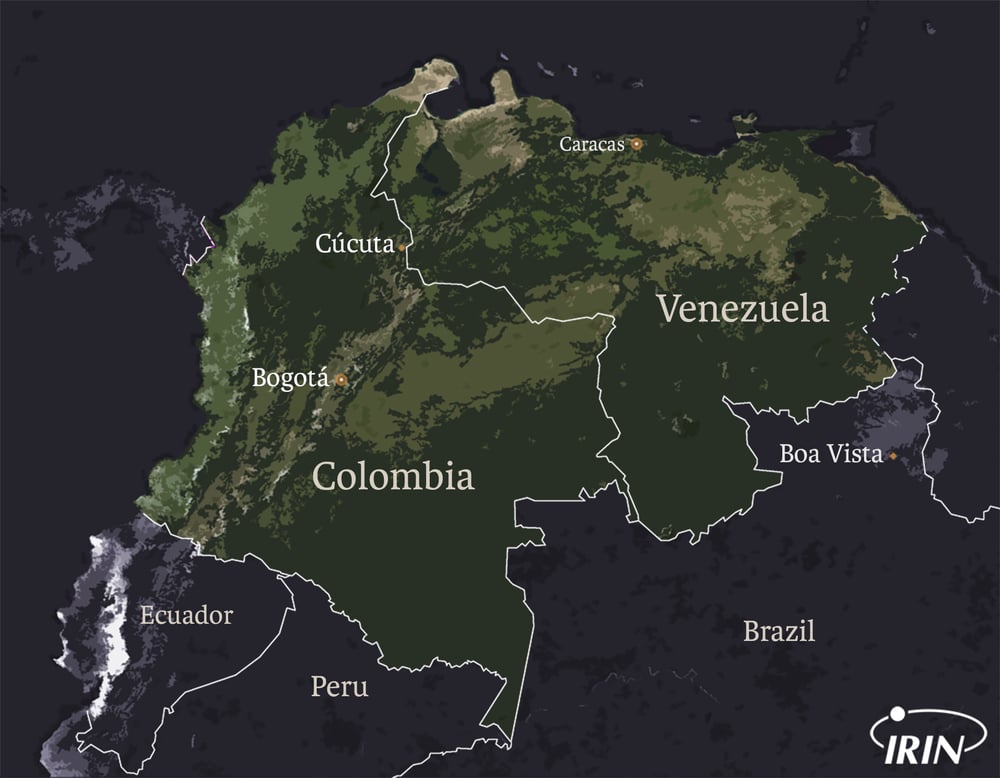 The Colombian government has been criticised for toughening its response, particularly for tightening immigration checks instead of easing legal restrictions on migrants seeking work. Humanitarian agencies and non-governmental organisations have stepped into the void, but their efforts have met challenges too.

On 4 May, after only one week of operations, the World Food Programme indefinitely suspended a food coupon system intended to help migrants in Cúcuta. The needs of the Venezuelans had been far outpacing WFP capacity and the initiative was stoking frayed local tensions as the local Colombian population was demanding to be included as well.

“We’ve always depended on commerce with Venezuela. With less commerce with Venezuela, our unemployment rate reached 15.8 percent last year. This caused strife against Venezuelans by Colombians who feel they’re having jobs taken from them,” he says. “Bogotá (the Colombian government) has promised to help handle this crisis and should start delivering on that. But the only viable, lasting solution lies in Venezuela.”

Cesar’s condition is assessed at the Erasmo Meoz Hospital in Cúcuta. The abscess and malaria eating away at his health frighten his wife, Methsabe, who refuses to leave his side.

Methsabe Medina willed herself across Venezuela to Cúcuta to save her husband Cesar’s life. He stumbled over the bridge, barely conscious, clinging to his wife. Cesar needed treatment for malaria (rising infection rates are one of the most visible signs of the collapse of Venezuela’s healthcare system) and a gnawing abscess on his thigh, left to fester due to the lack of medical supplies in their hometown of Maracay, in north-central Venezuela.

Instead of looking for help in Venezuela, the Medinas headed for Cúcuta’s Erasmo Meoz Hospital. Even though it was some 740 kilometres away and in another country, it was the nearest place they knew of that could save Cesar’s leg.

At the hospital, nurses run back-to-back shifts to meet surging demand. Doctor Andres Eloy Galvis, head of the emergency department, concedes that the Venezuelan situation has already reached critical mass. “We’re doing a lot, but we need help, from Bogotá or elsewhere,” he says. “Otherwise, within a year, we’ll have to ask patients to bring medical supplies themselves, just like in Venezuela.”

Official figures shared by the hospital’s administration show that 30 percent of patients are Venezuelan. Of the 1,533 women who went into labour in 2018’s first trimester, 635 had come from Venezuela specifically to give birth.

The impact their presence has on the heavily indebted hospital, now $5.6 million in the red, isn’t lost on the hundreds of migrant patients, many of whom are exhausted and suffering from malnutrition after days of travelling with dwindling supplies.

The overwhelming feeling is one of gratitude. 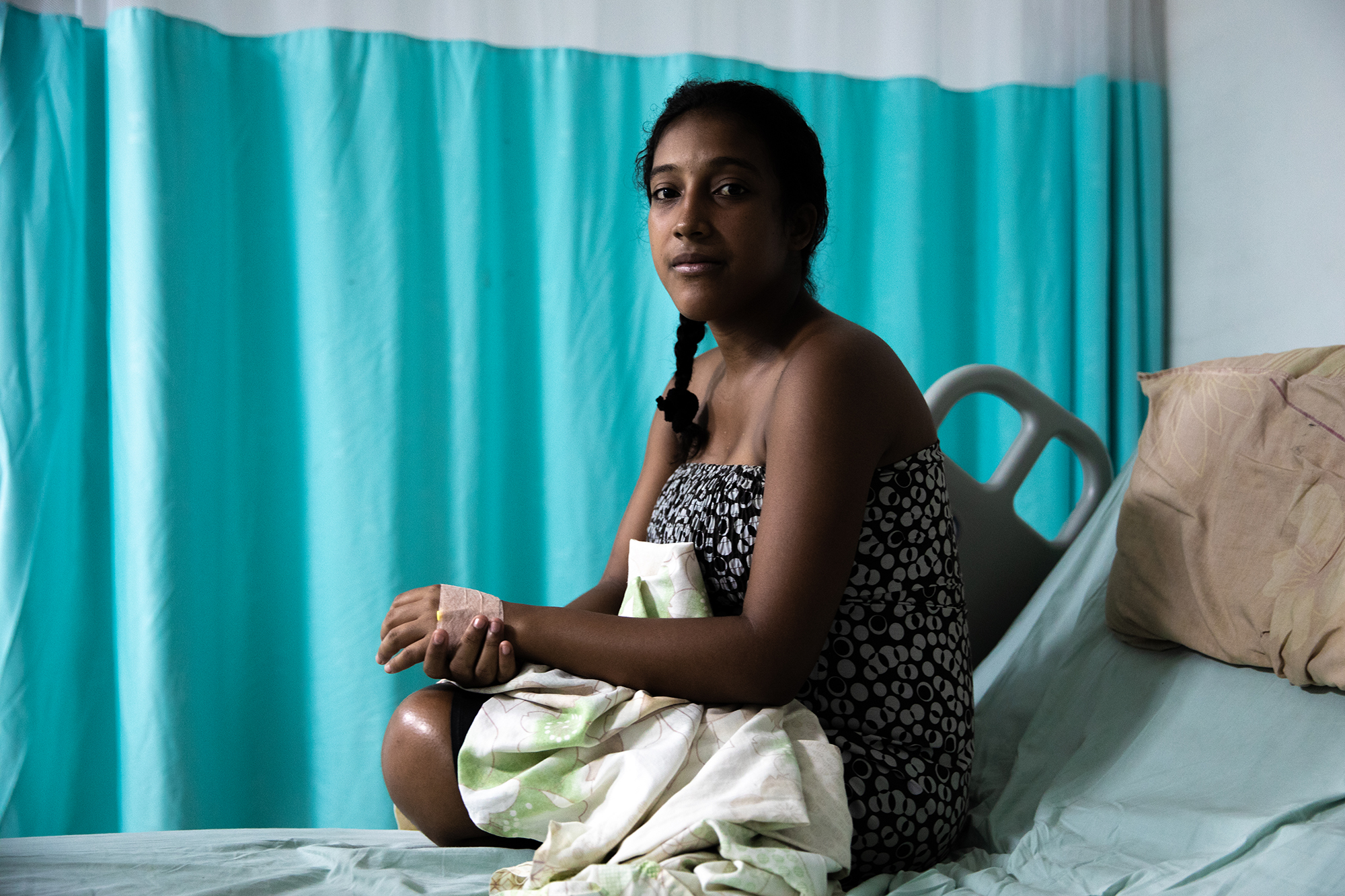 Tomás Ayuso/IRIN
Tomás Ayuso/IRIN
At the maternity ward is Odalys Martinez. Like many Venezuelans, Odalys came to Colombia because work dried up in Venezuela. Once she gives birth to her son, she plans to go on to Bogotá to find a job and start her life again.

In the maternity ward, 19-year-old Odalys Martinez is waiting to give birth. She says she would have lost her baby if it wasn’t for Colombia. Martinez is from the relatively prosperous state of Portuguesa. It was once Venezuela’s breadbasket, but, even there, farmers are now struggling. Legally, Martinez’s child will not have the benefits of citizenship, but she still sees the family’s future in Colombia rather than Venezuela. “I can’t raise my son back home, and I can’t do it in Cúcuta. There isn’t much work in either place. So, once my baby’s ready to travel, we’ll go to Bogotá and start our lives there.”

Outside the vaulted office windows of the mayor’s office in Cúcuta, lines of people queue up at financial institutions waiting for wire transfers from the Venezuelan diaspora. Cousins, aunts, friends, even former neighbours – now living around the region and further afield – pitch in to help. When the money is secured, the migrant Venezuelans invest in sweets to sell at stop lights and parks, hoping to make enough money to secure a roof for the night, some food, or, in many cases, a bus ticket towards a less crowded city.

Across Cúcuta, the Venezuelans – and some of the Colombians – are growing increasingly impatient and frustrated.

At a migrant shelter run by Scalabrinian priests, a Catholic order that provides support for migrants, is 58-year-old widowed father of two Luis Delgado. He left Maracay after he lost his wife to an aggressive cervical cancer. Delgado looked for treatment for his wife all over Venezuela, but was unable to afford the never-stocked medicines or even receive any kind of medical care from the collapsed clinics.

Luis Delgado attends a mass presided over by Father Francesco Bortignon at the Scalabrinian shelter in Cúcuta. Delgado lost his wife after they were unable to find treatment in Venezuela for her cervical cancer. The widower now raises his two children at the shelter and plans to work as a seasonal coffee picker, once he can raise enough money to travel to the farms.

Delgado feels trapped in Cúcuta but says he has a plan to get to Toledo, about 80 kilometres south of Cúcuta, and work as a coffee or cacao harvester. As eight-year-old Oscar and Luisana, seven, pull on his worn hands, he adds: “They’re the only reason I haven’t given up yet.”

He’s shooting for Toledo, not because of a tip or privileged information, but on a faint memory of a family vacation he took in the 1980s. He remembers seeing the throngs of coffee pickers taking to the fields, and hearing the promise of work. But Delgado’s dream of a new life in Toledo has stalled: the one-way bus fare for all three of them is six dollars, too steep to cover.

According to experts, the election of Maduro and the downward trajectory of the economic crisis mean things will get worse before they get better.

“Venezuela’s GDP has shrunk over 40 percent since 2013, hyperinflation has taken hold, and oil production, the mainstay export for the country, has declined to below 1.5 million barrels a day, the lowest level since 1950,” says Trinkunas. “With no prospect for change or better governance, more and more Venezuelans will give up hope and flee abroad, and those behind will become increasingly immiserated and in need of humanitarian aid.”

The Ordaz family outside their unfinished, for-rent, one-room home on the outskirts of Cúcuta. The parents worry about the children’s schooling and where their next meal will come from. The children share a ration of apples before their mother, Daniela, heads off to work.

At the very edge of Cúcuta, where Venezuela’s mountains loom over rolling storm clouds, Carlos Ordaz, a beneficiary of the suspended WFP programme, isn’t sure how he’ll feed his six children once the 667,000 pesos ($235) from the UN agency runs out.

Ordaz, a phone technician from El Tigre in eastern Venezuela, has been unable to get a legal job and blames Colombian “xenophobia”. His wife, Daniela, works as a live-in domestic help. She spends precious few hours with her children in between the seven-day shifts and earns 600,000 pesos ($211) a month, which just about keeps the family afloat.

The family of eight, which sold everything to finance the journey across Venezuela and was forced for a while to live off just wild yucca leaves, shares two mattresses in an unfinished, for-rent, single-room house. It isn’t much, but it’s safe, says Ordaz, and for that he feels grateful.

“Sometimes, I get homesick, but we can’t go back,” says Daniela. “Not now.”

Their two girls draw stick figures of their mom, dad, brothers, and sisters under the word FAMILY on a piece of paper they give Daniela before she leaves for work. Their four boys eat and share three apples cut into wedges and bought with the WFP coupons.

With the suspension of the WFP programme, Ordaz says they’re back at square one. They’ll start rationing supplies, just like they did every day back home since 2015. “If this mess taught us anything, it was how to survive,” says Carlos, keeping only one bite of apple for himself.

(TOP PHOTO: Migrants wait outside the Scalabrinian shelter in Cúcuta. Many Venezuelans are forced to sleep on the streets as lodging is in short supply. CREDIT: Tomás Ayuso/IRIN)