Mustapha Sallah knows all about taking the “back way”, the Gambian expression for migrating to Europe, a journey that for many citizens comes to a brutal halt in a Libyan jail.

Having experienced detention first-hand, 26-year-old Sallah and the group he set up last year, Youths Against Irregular Migration, are now using the airwaves in his home country, as well as social media and roadshows, to try to deter others from following in his footsteps.

“The phone-in discussion was on the consequences of migration – good or bad,” Sallah told IRIN after his recent weekly half-hour segment on Capital FM radio. “One guy called in and said, ‘Italy is already full. There are many things you can do here [in The Gambia].’” 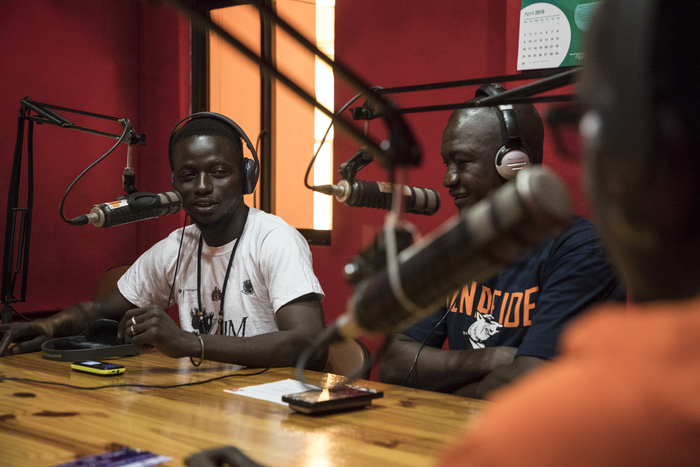 Jason Florio/IRIN
Mustapha Sallah and Jacob Ndow on the air.

According to the World Bank, Gambians make up Europe’s second largest diaspora as a share of home-country population (in their case 1.9 million).

“The Gambia has never had a group of returnees trying to discourage youths from travelling irregularly,” Sallah said. “We went there [Libya] and saw and experienced everything, so when we talk [here] we use our own stories on their level. When people see us, they say ‘this is what we needed, you are really supporting society’.”

The Gambia is emerging as a test case for international efforts to reverse irregular migration across the Mediterranean. Sallah was among 2,674 Gambians flown home from Libya by the UN’s International Organization for Migration between January 2017 and June 2018.

These operations only became feasible with the fall of president Yahya Jammeh’s dictatorial regime to a democratic coalition government in January 2017.

Concerns remain over the capacity to assist large numbers of returnees, but the strategy appears to be working: recent IOM data shows that The Gambia has dropped out of the top 10 league of migrant nationalities arriving in Italy for the first time since the Mediterranean crisis began in 2014-2015.

Anecdotally, there is consensus that fewer people appear to be leaving, but there is no hard data to support this assumption.

As well as highlighting the perils of migration, YAIM seeks to draw attention to the potential benefits of staying in The Gambia.

YAIM member Saihou Tunkara, a 22-year-old who returned from Libya with Sallah, told Capital FM listeners about enrolling in a hairdressing course sponsored by the anti-trafficking campaign “I’m Not for Sale”.

“If I had had that support before, I would not have gone the ‘back way’,” he said after the radio show. “Gambia is a place where people don’t support you at the grassroots level. If you are on the journey [to Europe] then they support you, they start sending money, but that is not the right solution.”

The belief that you can only make it in Europe is so entrenched among most Gambians that many families would still rather bet their last dalasi on the hope their youngsters will succeed on the dangerous journey than support them in developing livelihoods at home. 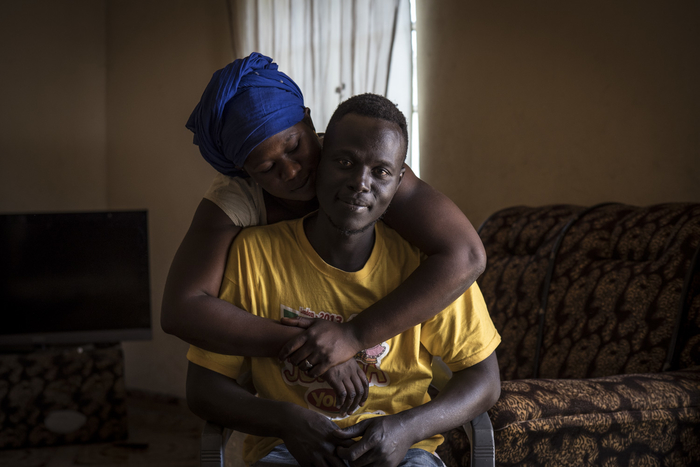 “Changing the minds of the sponsors [relatives and friends] of this irregular migration is the most difficult thing. They lack confidence in the youths and this country,” Sallah told IRIN. Sitting in his crowded family compound with friend and co-founder Jacob Ndow, they explain the organisation’s genesis and why they think their message really hits home.

“Youths Against Irregular Migration was created by migrants in the [Libyan] prison. We were there for each other against the hardship. Everybody was saying I wouldn’t even want my enemy to take this journey,” said Sallah, who spent four months in detention.

“We were treated like slaves; we didn’t take a bath for months, so we tried to escape and they beat us seriously,” added Ndow. “That’s when I met Mustapha. He was also punished and he couldn’t stand. That’s when we decided that we must make people aware that the ‘back way’ is a bad road.”

YAIM has just completed the second of its “youth caravans”, with funding from the German Embassy in Banjul. They travelled to communities in two regions particularly affected by irregular migration, sharing their experiences in market squares and meeting places.

A female member of YAIM, who asked to remain anonymous, explained how on the tours she recounts her experiences of being kidnapped and sold. “The ‘back way’ is a dangerous journey, especially for women. We face too much maltreatment,” she said.

Such tales are softened by performances. Ndow is one of the star acts, singing the song he made up in prison. Upon his return he recorded his single, “The back way isn’t an easy road”, which gets regular airplay.

“Even the kids and elders are singing that song, and it will change their concept of travelling because they will know it’s not an easy road,” he said.

Coming home is not an easy option either, and another returnee group is trying to establish its own reintegration project to overcome the stigma of being a so-called “failed migrant” and to lead by example.

“Libya was full of ugly experiences: slave labour, torture. It became a living hell. But how you are looked upon as a returnee is really stressful,” said Pa Modou Jatta, a member of Returnees From The Backway (RFTB), which was also founded in a Libyan detention centre.

“You feel that you have betrayed yourself and your family because you had aims of becoming someone great.” 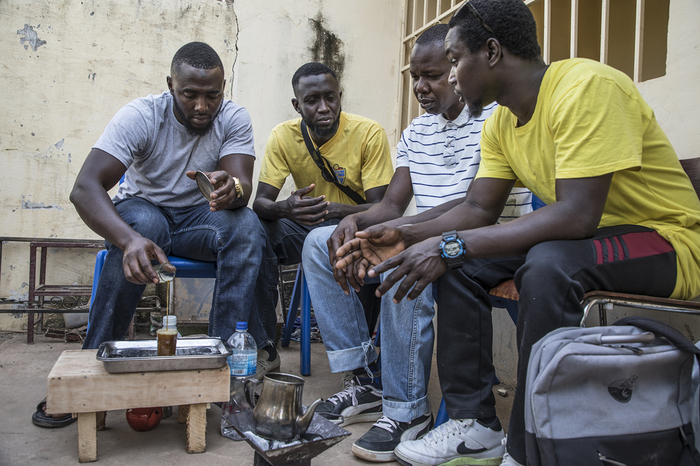 Jason Florio/IRIN
Tea with the Returnees From The Backway association.

Gambians are great tea-drinkers, and often make an elaborate ritual of it, called attaya, which is especially popular among young men. So RFTB uses attaya sessions to spread its message, often after football training sessions.

RFTB has been given farmland in the Kerewan Local Government Area by village elders inspired by their cause. The grand plan is to establish a farming cooperative with other returnees and become role models for local youths, then spread the scheme across other regions.

None of RFTB’s members are farmers, so they have persuaded IOM to fund their agricultural training. “You have to seize opportunities to do well in life,” said the group’s chairperson Alhagie Camara.

This optimistic spirit appears to be part of a bigger shift following decades of economic stagnation under the previous regime, which controlled most of the country’s meagre industries.

New government programmes to tackle high levels of youth unemployment and under-employment are being hastily implemented, bankrolled by the EU’s Trust Fund for Africa, which was controversially launched in 2015 to stem the flow of irregular migrants to Europe.

EUTF’s 11-million-euro Youth Empowerment Project is generating an “entrepreneurial awakening”, according to Raimund Moser, a YEP project manager from the International Trade Center, which runs the market-led skills and job creation scheme on behalf of the government. “For those who have the skills and determination this is a better time,” he added.

But YEP schemes are aimed at the general youth population, and the programme has drawn criticism over an onerous requirement to fill in a three-page business plan.

Migrants from The Gambia were the least likely to have completed formal education and were most likely to be unemployed at time of departure, according to IOM’s survey of the top five migrant nationalities in 2017.

More EUTF funding is going into developing short-term practical programmes for low-skilled migrants and they will be linked through a referral system to the IOM-EU’s Migrant Protection and Reintegration Programme that launched in November. IOM Gambia expects to provide tailor-made reintegration packages to 3,000 migrants within 12 months.

Its chief of mission, Fumiko Nagano, said: “It is building on the ‘you can make it in The Gambia’ motto. We believe that’s what will ease the whole return process.”

But The Gambia is a long way from being ready to absorb the reintegration of tens of thousands of migrants stranded in Europe. A 2017 report on migration governance under the new government highlighted concerns over instability if returns were ramped up too quickly.

“Many things are getting better, but the job market for youths will take time. Nobody has pressed a switch and The Gambia is suddenly a paradise for jobs,” added Moser.

The current economic reality doesn’t stop Alhagie Camara from dreaming big. About to start his agricultural training with fellow RFTB members, he said: “We are impatient to begin.”