Three years after earthquakes levelled parts of Nepal’s remote Dolakha District, Sun Maya Tamang is left on her own in a bamboo shack perched high above the nearest village while her neighbours below rebuild their homes.

The 25 April 2015 earthquake and its aftershocks killed 9,000 people nationwide and left an estimated 3.5 million homeless. Reconstruction has generally been slow everywhere in Nepal, but advocates for survivors like 70-year-old Tamang say the homes of widowed and elderly women have largely been overlooked in the rebuilding process.

Renu Rajbhandari, chairperson of the Women’s Rehabilitation Centre, an NGO that works on women’s rights, said authorities haven’t accounted for how disasters impact women and men differently. “Those responsible are not showing enough will to address the issues and prioritise the most vulnerable populations,” she said.

Authorities acknowledge that people like Tamang have suffered, with reconstruction efforts more focused on helping households finish building rather than on ensuring that some of the most vulnerable people can move forward with their lives.

“We have to work step by step to ensure that no one is left out in the rebuilding process,” said Netra Prasad Subedi, an official with Nepal’s National Reconstruction Authority, the government agency responsible for overseeing the rebuild.

Deadlines, but not enough help

In an attempt to speed up reconstruction, the government has set a July deadline for Nepalis to apply for additional funding to rebuild their destroyed homes.

But setting a deadline likely won’t help women in rural areas who have limited support to navigate the process of applying for funds. They often lack the skills needed to rebuild on their own in areas where construction labour is scarce. Rights advocates add that pervasive discrimination makes it even harder for women to recover.

“At a time when the male-headed households are unable to rebuild houses on time, the situation of single women, who have very limited or no support at all in rebuilding, is even worse.”

“Life is challenging every day inside this hut,” Tamang said recently as the April rains spattered on the corrugated zinc roof overhead. After her husband’s death last year, she now lives alone in what was intended to be a temporary structure next to their destroyed home. At night, a chilling wind passes through the thatched bamboo walls, which are blackened by the wood fire she uses for cooking and heating. With a heavy rain, streams of water flow inside.

This month, authorities asked donors and aid agencies to help fast-track reconstruction for some 18,000 of the most vulnerable people – the elderly, people with disabilities, and widowed or single women older than 65.

But advocates say much more needs to be done. And with Nepal’s annual monsoon coming in June, Tamang and others like her will endure a fourth rainy season without a proper roof over their heads.

The damage from the earthquake and its powerful aftershocks was most acute in remote areas like the mountainous Dolakha District, the epicentre of a major aftershock that rattled Nepal again on 12 May 2015, weeks after the initial earthquake, and destroyed Tamang’s former home.

“At a time when the male-headed households are unable to rebuild houses on time, the situation of single women, who have very limited or no support at all in rebuilding, is even worse,” said Sumeera Shrestha, executive director at Women for Human Rights, a Kathmandu-based non-governmental organisation that advocates for the rights of women after the earthquake.

Roughly 26 percent of homes destroyed or damaged by the earthquake are headed by women, according to government data. UN-led surveys of earthquake-hit communities in Nepal found women were less likely than men to have started or completed reconstruction, less likely to be equipped with the skills to rebuild, and less likely to say they understand the complicated funding process, which requires government-approved housing designs and inspections before additional funding can be released. 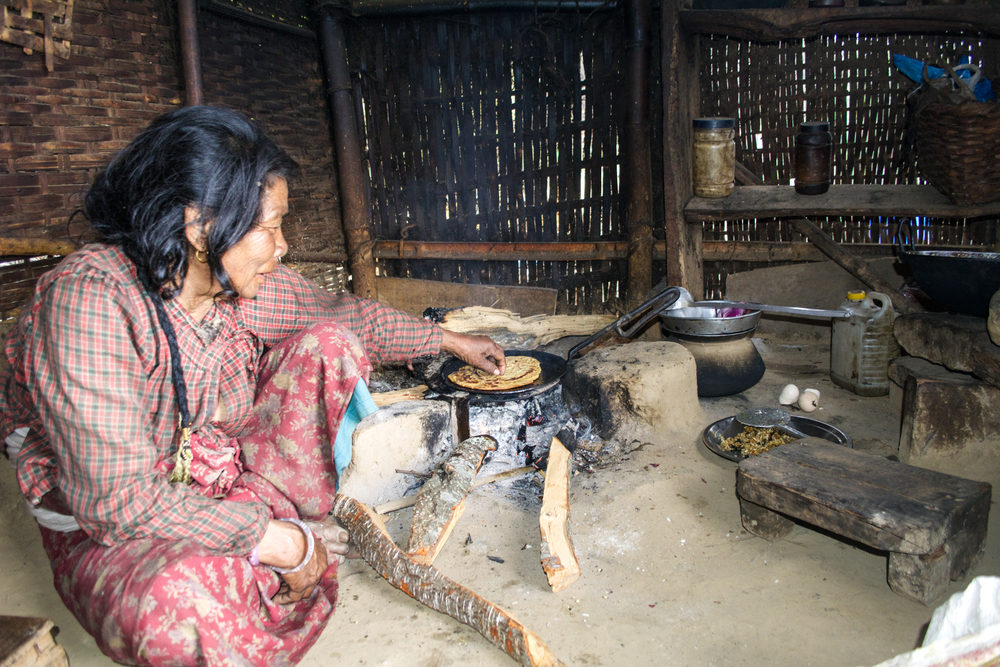 Pragati Shahi/IRIN
Sun Maya Tamang, 70, cooks a meal in her thatched bamboo hut in Nepal’s Dolakha District. Tamang says she has received about $500 in government aid, but it’s not enough to start rebuilding.

Signs of rebuilding are everywhere in Dolakha: masons piece together half-finished homes with bricks and mortar, concrete foundations are replacing piles of rubble, and iron rods are rising as new structures take shape.

Homes like Tamang’s are also a common sight, though. They are ramshackle shelters patched together from relief supplies distributed after the earthquake. Tamang said the government gave her the first of three rebuilding installments, 50,000 rupees – less than $500. But she doesn’t have the skills to do the work herself, and there is no one to help her.

Rebuilding after Nepal’s costly earthquake has been beset by long delays and criticism. As of late March, only 15 percent of some 767,000 households eligible for government reconstruction funds have been completely rebuilt, according to data from the National Reconstruction Authority.

To begin, much less complete, a rebuilding project, some homeowners need training and other support, while many rural women need help just navigating the bureaucracy of accessing funds, rights groups and aid agencies say.

"For women, to run errands at the government offices to submit their grievances and access information about grants is challenging," said Cecilia Keizer, the country director for Oxfam in Nepal.

Basic issues like land ownership and a lack of vital documents such as citizenship and marriage certificates still cause roadblocks: In Nepal, female ownership of land or property stood at 20 percent as of the last census in 2011, and many women have struggled to access official funding without these vital documents.

Mohna Ansari, a member of Nepal’s National Human Rights Commission, said the government fails to grasp why vulnerable women and other groups haven’t been able to rebuild their homes.

“The concerned authorities never tried to know why, even after receiving the first installment, they are unable to rebuild their houses,” Ansari said, adding that local governments must do more to identify and help people who have missed out on reconstruction aid.

Sagar Acharya, who leads the National Reconstruction Authority in Dolakha District, said authorities have concentrated on finishing houses already under construction – the government has set a target of 450,000 homes to be rebuilt by the end of July. This, he said, has left some of the most vulnerable people behind.

“Their voices remain unheard,” he said.

For now, Tamang is waiting out the approaching rainy season in her makeshift hut, a steep 10-minute climb above her neighbours’ new houses.

Her own fragile home was meant to be temporary.

“Soon, the monsoon will arrive,” she said. “I fear that heavy rains this time could wash this hut away, leaving me homeless once again.”