Beatrice Adyero* woke up one July morning in 2002 to news that completely shattered her life. Her husband, four sons, and a daughter-in-law were among 56 civilians abducted and killed by the Lord’s Resistance Army rebel group. Her youngest granddaughter, only two-years-old, wasn’t spared either.

Nearly 16 years after the slaughter of her family, Adyero still struggles to talk about her feelings.

The conflict in northern Uganda lasted for almost 20 years until a ceasefire in 2006. It displaced some 1.8 million people and saw the abduction of an estimated 66,000 children and youth, used as soldiers, sex slaves, or porters by the LRA.

A study the year the war ended found that northern Uganda had the highest rate of post-traumatic stress (54 percent) and depression (67 percent) ever recorded among displaced and conflict-affected populations anywhere in the world. It found that women were twice as likely to show symptoms of PTSD and four times as likely to have symptoms of depression.

The impact of those long years of violence and hardship still resonates among the survivors. The lack of awareness in Uganda around mental health issues – and an enduring stigma related to them – means most people are unlikely to recognise the symptoms and seek treatment.

And the abuse didn’t end with the war. The lives of LRA victims and former abductees, like those of other rural women, are affected by a range of stress factors that include domestic violence and alcohol abuse – all of which are exacerbated by trauma.

Ninety out of 97 women – all of them survivors of conflict-related sexual- and gender-based violence – said in a 2014 study that they still faced the same level of sexual violence as in the past at the hands of partners, relatives, or neighbours.

In spite of evidence of very high levels of mental illness, especially among women, Uganda spends less than one percent of its budget on mental health and employs few psychiatrists (around 30) for its population of almost 45 million. The World Health Organisation estimates that around 90 percent of mentally ill people in Uganda never get treatment.

The only dedicated mental health unit in Uganda’s northern Acholi region, where much of the war was fought, is in the Gulu regional referral hospital. Kateregga Canaan is its overburdened psychiatric clinical officer.

The unit has a trauma centre which provides a group counselling service, but its catchment area covers eight districts.

“It is a vast area. Not everyone can afford transport from their homes to this facility,” said Canaan. “We must have outreach programmes so we can meet people where they are in the community. We must understand their surroundings, the challenges they go through.”

Private initiatives and NGOs like the Transcultural Psychosocial Organisation (TPO) have stepped in to try to fill the gap. At a cognitive behavioural therapy session run by the non-profit under the shade of a tree in her village, Adyero is shown a sheet of paper with a sad face at 0 and a happy one at 10 and asked how she feels.

She scores herself a two out of 10 on the mood scale.

Wearing a red floral shirt and grey skirt, she sits on the ground and absent-mindedly separates leaves from cowpea stems.

Breaking into silent tears after a few minutes, she can’t speak anymore.

Adyero lives with her two surviving grandsons, aged 18 and 20. They support the family of three by farming. Neighbours tells IRIN she often seems unwell, drinks too much, and weeps incessantly. 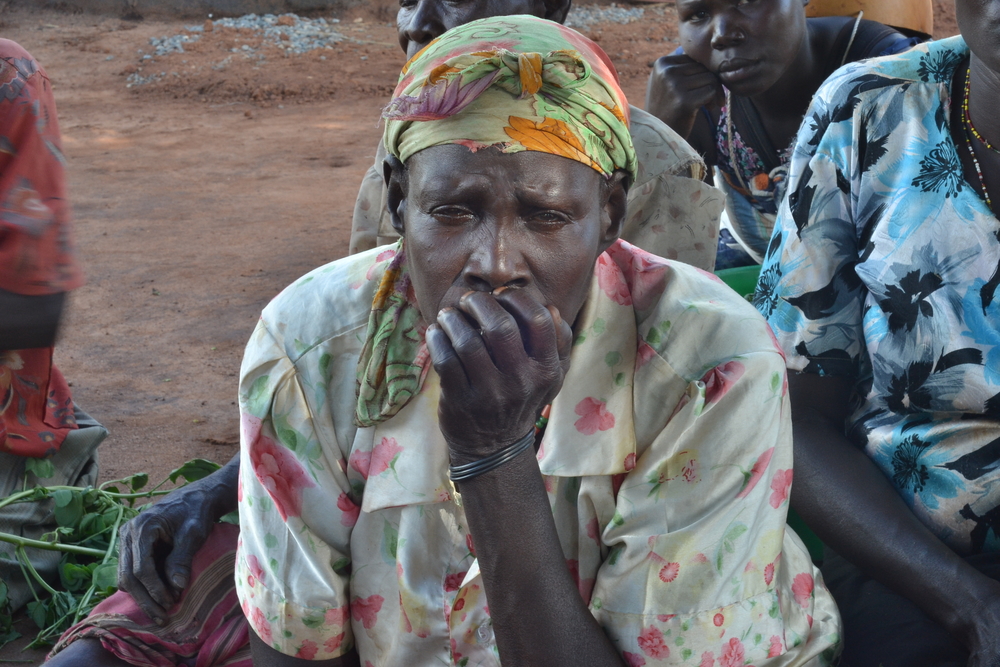 The group therapy session Adyero is attending is run by TPO as part of a three-year project to provide support to survivors of the war.

Adyero and 14 other members of her group were identified with the help of community leaders, and then assessed for depression and PTSD before being taken through eight to 10 counselling sessions.

When LRA rebels abducted Suzanne Acan* and her husband, they first killed him and then ordered her to kill their 18-month old child, who she was holding protectively in her arms.

Acan was traumatised by the incident, but 16 years later during her therapy sessions, she makes no mention of it.

“My main worry today is poverty,” she explains. “I raised my children alone and don’t have enough to provide for them.”

Her daughters, though just 15 and 17 years old, are both already married. Her two sons, who went to school until a few years ago, have dropped out due to the lack of money to pay their school fees.

Under the TPO initiative, women like Acan are encouraged to join income-generating initiatives and form savings and loan associations that can help them financially. So far, groups have pooled their resources to engage in activities like poultry farming and beekeeping.

“I can’t continue thinking about what has happened and what I cannot change. I have to take care of myself while I am still alive" - Beatrice Adyero

In the northern region, among the poorest in the country, 30 percent of the population lives below the poverty line, with single mothers and widows especially vulnerable.

“We are focused on mental health, but we have taken the economic approach because we have seen that it can really help women stabilise and recover,” said Jude Okeria, project coordinator with TPO.

The conflict and its aftermath has worked to increase existing gender inequalities in the patriarchal society of northern Uganda.

More than half the women interviewed in the 2014 study said they experienced psychological effects as a result of this “revictimisation” – from feelings of hopelessness and shame to thoughts of suicide.

Eunice Nancy Atoke, a counsellor with Vivo International, another non-profit outpatient initiative in northern Uganda, told IRIN that every woman she had counselled over the last year was suicidal and had attempted suicide at some point in her life – usually because of her experience of gender-based violence.

Canaan, the clinical officer at Gulu hospital, said trauma related to domestic abuse has become more common in the years since the war.

“When a man is not sure of his source of income, he drinks, and when he comes back home, he also beats the wife,” he said.

In these scenarios, mental health professionals are limited in their capacity to help: there are no safe houses that women can access, and the option of leaving the husband and returning to their parents’ home is a remote one.

“[When treating the women], we often have to deal with the past, the trauma and the sexual abuse [that they faced when abducted], and then also with ongoing domestic violence,” said Anett Pfeiffer, who leads Vivo’s mental health initiative in the region.

Most women are dealing with so much, all at once, that it sometimes makes treating trauma feel like “the easy part”, she added.

Tackling the complex post-conflict scenario in northern Uganda will require a long-term holistic approach, and the ability to reach out to the many communities beyond Gulu.

In the meanwhile, Adyero says she has reduced her drinking by a lot and tries to spend more time with her therapy group, talking to them whenever she feels low.

“I can’t continue thinking about what has happened and what I cannot change,” she said. “I have to take care of myself while I am still alive.”

(*Not their real names)