The UN officials running Syrian relief efforts failed to implement the key recommendations of a 2017 review of its operating principles despite being criticised for allowing the government of Bashar al-Assad to dictate where and when aid is delivered, IRIN has found.

The UN, which plays the dominant role in providing assistance to more than 13 million Syrians in need, can operate only with the permission of al-Assad’s government and under the protection of its security assurances. In practice, the Syrian government prevents the majority of the aid convoys the UN requests permission for from entering rebel-held areas.

Humanitarian access, rather than being kept separate from the war, as prescribed by the Geneva Conventions, has been one of the most highly politicised aspects of the Syrian conflict.

Some level of cooperation with al-Assad’s government is a necessity, not only for helping those civilians who live in the areas it controls but also for negotiating access to those in the areas it does not. The sprawling UN system has long struggled internally to agree how it should balance this need to work with the Syrian government with the humanitarian principles that are meant to guide all aid work: humanity, neutrality, impartiality, and independence.

The gap between what the UN wants to do and what it manages has been brought into sharp focus of late. Precious few aid deliveries have made it to civilians trapped in besieged or “hard-to-reach” areas, including the Damascus suburb of Eastern Ghouta. The area is currently under severe bombardment, with food and medical supplies reportedly running desperately low for the nearly 400,000 people under seige there.

In scenes reminiscent of the fall of the final enclaves of eastern Aleppo in December 2016, more than 500 people were reportedly killed in airstrikes and shelling last week in Eastern Ghouta, despite increasingly desperate pleas from the international community for a humanitarian pause. After two days of delays and frantic diplomatic discussions to reach agreement on the wording, the UN Security Council passed a 30-day ceasefire resolution on Saturday to allow for aid access and medical evacuations. Despite this, Syrian military forces began a ground offensive in Eastern Ghouta the next day, with the aim of taking back control of the area.

“The attrition of civilian welfare is a war objective of the Syrian government,” Mathieu Rouquette, a representative of the forum that represents international NGOs working in Syria, told IRIN.

The UN came under growing pressure to take a stand against the Syrian government’s manipulation of the relief effort throughout 2016, as sieges intensified on rebel-held villages like Madaya and Zabadani. Pressure mounted after the revelation that al-Assad’s government had been allowed to edit the UN’s aid plan to remove words it saw as contentious, including “siege” and “besieged”.

In September 2016, to protest the government’s “significant and substantial” influence over aid, 73 Syrian NGOs withdrew from the “Whole of Syria” approach, the umbrella framework coordinating aid to rebel- and government-held territories.

In 2017, the UN’s emergency aid coordination office, OCHA, asked veteran negotiator Martin Griffiths to undertake a review of its work in Syria and make recommendations regarding “matters of principle” in its humanitarian operations.

A summary of his report, released internally last May but obtained exclusively by IRIN, notes “competing narratives”, concerns about “principles and practice”, unclear impacts of relief operations, and an uncomfortable relationship between aid delivery and political negotiations.

Griffiths recommended a workshop in Cyprus to thrash out differences. He also proposed installing an ombudsman to deal with complaints and ethical dilemmas for at least a year. Sources told IRIN this function was to have been performed by Griffiths himself, with the aim of tackling “issues of core principles and values” from an independent perspective.

In the wake of demands by the Syrian NGOs for a transparent investigation into UN operations in Syria, Griffiths’ recommendations initially seemed headed for a decent hearing, according to sources involved in the aid response.

One worker with a Syrian NGO described the perception of a new willingness among the “higher-ups” in the UN response to listen to the concerns of smaller organisations because of a 2016 review of the “Whole of Syria” approach they had participated in. IRIN has seen a draft of this internal report.

The NGOs were encouraged to direct their concerns into that OCHA-commissioned review process. Despite initial hesitation, they felt that their concerns were addressed once the findings began to be implemented and decided to rejoin the coordination mechanism.

“Things changed a lot; they were listening a lot,” said the Syrian NGO worker, who like many people interviewed by IRIN asked to remain anonymous due to the ongoing sensitivity of these issues. “We did feel an improvement.”

“Things were getting better, right until Kevin left,” an aid worker involved in the Syria response told IRIN. This source accused al-Za’atari of conducting a “power grab” after Kennedy’s departure and of trying to reverse a raft of proposed reforms to the aid effort.

To the dismay of several people involved with the Syria aid response that IRIN spoke to, Griffiths’ watchdog recommendations were soon ignored: the Cyprus meeting never happened, no ombudsman was put in place.

Sources said that al-Za’atari acted unilaterally, angering UN departments and NGOs alike. One told IRIN: “his defiance has put us back years behind. He hasn't understood that the humanitarian system has moved forward [with regards to the Syrian response].”

OCHA insists the Griffiths’ report was not abandoned. A spokesperson told IRIN: “These recommendations are being factored into ongoing discussions on how to improve the response, led by the humanitarian leadership working on the Syria crisis, in the context of the Whole of Syria framework.”

Al-Za’atari’s organisation, the UNDP, declined to comment on these issues. Griffiths confirmed to IRIN last year that his work on Syria had been “paused”, without elaborating further.

The UN’s operating principles in Syria remain a bone of contention, with al-Assad’s government still accused by critics of trying to manipulate the aid response and of using starvation as a weapon of war.

Even before the latest uptick in violence, the UN failed to deliver much in the way of help to hundreds of thousands of people under siege in Eastern Ghouta.

On 14 February, a convoy by the UN and the Syrian Arab Red Crescent brought aid to just 7,200 people, the first access to the area in 78 days. Activists in the rebel enclave posted videos online criticising the small operation as part of the government’s “starve-and-die” strategy.

One Syrian aid worker originally from the area described the convoy as “fake aid” and said it was insufficient to make a difference, serving only to reinforce the message that Damascus has total control over the area.

Even by the UN’s own account, what it brought in was negligible compared to the needs of the 275,000 trapped people aid agencies say need help (out of a total 393,000 besieged). “Much-needed water and sanitation, education materials and non-food items, such as kitchen sets, blankets and plastic sheets” were not allowed on the convoy, according to the UN.

OCHA said of the Eastern Ghouta operation: “Access is fluid and linked to military developments, shifting front lines, active hostilities and so on, as well as to bureaucratic obstacles including at local levels. The UN has continuously, and forcefully, advocated for increased humanitarian access to all people in need, wherever they are, on behalf of all humanitarian partners in Syria.”

Analysts say the increasing pressure on Eastern Ghouta comes as the Syrian state tastes victory and repeats the tactics it used in retaking Aleppo and Homs.

Russian Foreign Minister Sergei Lavrov recently suggested that Moscow and its allies in Syria could “deploy our experience of freeing Aleppo... in the Eastern Ghouta situation”.

In such operations, where overwhelming military superiority struggles to snuff out small pockets of armed rebellion, many argue that restricting aid access has become a deliberate policy. 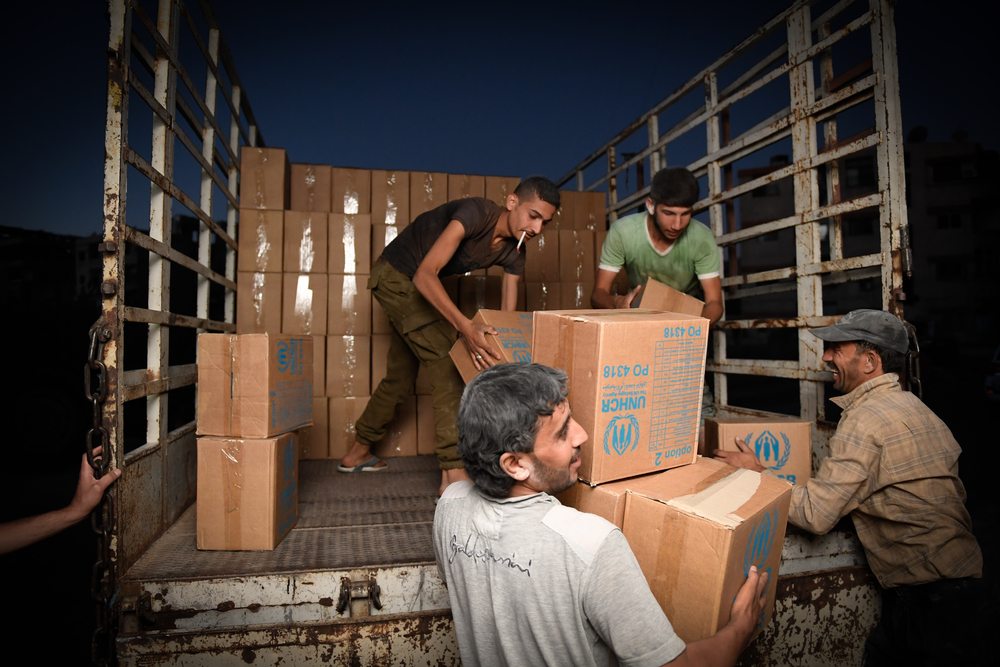 Humanitarian access is overtly used to send signals and win concessions as part of the political agenda in talks in Geneva and elsewhere, noted Rouquette, the representative of the forum that represents international NGOs working in Syria.

The dispatch of convoys of supplies has become one of the metrics of the freedom of humanitarian access, and the data is grim: through 2017, approval was granted for only around 25 percent of requested UN convoys to besieged and hard-to-reach areas. When they did go ahead, tonnes of items were often removed, typically medical supplies, with only one convoy from 55 being allowed without supplies being removed in 2017.

“Access has become a metric, not a means to an end,” said Rouquette. “Access is only a transaction.”

The recent Eastern Ghouta convoy – allowed only after repeated requests to the Syrian government for access – is the latest in a long series of compromises that have left the UN open to criticism, and that the Griffiths review was meant to address.

Other aid groups, it must be noted, including the Red Cross and Red Crescent Movement, have fared little better in negotiating independent humanitarian access with Damascus.

The concerns that prompted the Griffiths review appear to remain unresolved within the UN, and they hang over the response as aid agencies begin to shift towards post-war reconstruction and development, even as the fighting continues.

An October 2017 memo that was finalised last month entitled “Parameters and Principles of UN Assistance in Syria” seems to be the latest attempt to put the UN’s house in order under one policy, with a focus on what comes after emergency aid.

First reported by London-based newspaper Asharq al-Awsat, but also obtained by IRIN, the document states that the policy “shall apply to all UN actors operating in Syria” and will be monitored by a task force reporting to UN Secretary-General António Guterres.

It declares that the UN’s support for post-war reconstruction – a process that is in part likely to fall to al-Za’atari’s UNDP – will be conditional on progress in political talks. It also says the UN will not promote the return of refugees or internally displaced people but will support those who return voluntarily.

It cautions against “development” programmes being included in its Humanitarian Response Plan, which it says ought to focus only on the most critical needs. Signalling support for continued cross-border aid operations, the memo recommends using “the most direct routes”.

The memo goes on to promise human rights-based programming, prioritising needs rather than government priorities, and fair, equitable, and non-discriminatory assistance.

The memo then states that assistance “must not assist parties who have allegedly committed war crimes or crimes against humanity”. It goes on to note that “UN assistance shall be determined consciously and explicitly without prejudice to the goals of accountability for serious human rights violations, and the goals of legitimate, equitable, and sustainable political settlement.”

And it reiterates, in a bold font, that the humanitarian principles of “neutrality, impartiality and independence apply”.