I will support your work.
Part of an in-depth series looking at the enormous scale and range of food crises around the globe heading into 2018
AWEIL

With South Sudan’s harvest season coming to an end and the dry season fast approaching, she is exhausted and hungry, taking longer rests in the shade of a nearby tree where she chews on a few raw peanuts to fill her empty stomach.

She earns less than half a dollar for a day’s work labouring for her cousin, who is a local farmer in Aweil, close to the northern border with Sudan.

She has few other options: her village’s harvest was ruined by rains earlier this year and her family crossed the border in search of food.

Weak and sick with a constantly bleeding lump in her breast, she was left behind, so came here – a four-day walk – to try to eke out a living. She hopes that one day her children, who left to find work in neighbouring Sudan, will come back to take care of her.

Moukiir has seen many harvests over the years, but this has been one of the worst, in a region that has historically struggled with food insecurity.

“I either work in the fields or collect garbage in exchange for a piece of bread and some tea,” she told IRIN. “I’m exhausted and hungry and it’s hard to survive, but I can’t give up.” 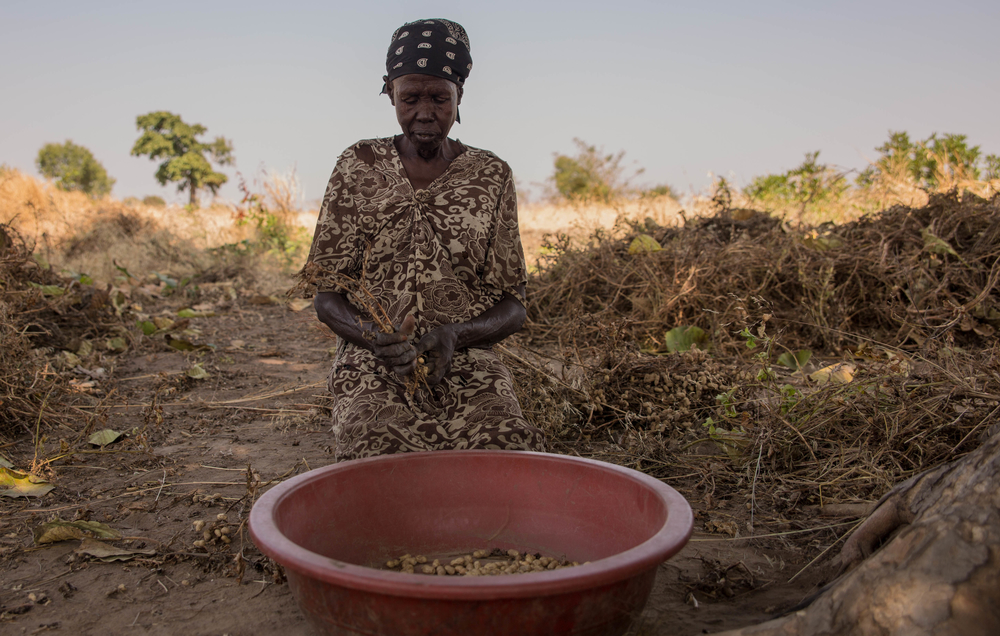 Stefanie Gilinski/IRIN
Abuk Moukiir sits in the shade of a tree while harvesting peanuts. She’s sick and weak but survives hunger by finding different day jobs

Despite its current harvest, South Sudan is facing an extreme food crisis.

Its four-year civil war, with its mass displacement and terrifying violence, has wrecked food production and undermined rural markets.

Almost half of the population – 4.8 million people – are currently severely food insecure. That’s 1.4 million more than the same time a year ago.

It’s projected to get even worse in 2018, with an estimated 5.1 million people expected to go hungry.

Many of Aweil’s men have left in search of work to try to support their families.

Others have joined President Salva Kiir’s forces in the battle against rebel militia, or have stayed loyal to the previously powerful former army chief Paul Malong, who is from the area but was sacked earlier in 2017.

Climatically, nearly everything went wrong this past year. Floods inundated Aweil’s lowlands while drought afflicted its highlands, spreading desertification further north towards Sudan. Experts are increasingly blaming this deadly combination on the effects of climate change.

Like Moukiir, 1.4 million people in Greater Aweil are trying to cope with failed harvests, crop pests, hunger, disease, and exhaustion.

They have managed to survive the crisis so far, but the hunger gap – the period between when households run out of stored food and the next harvest – is fast approaching, threatening malnutrition and even death.

The lean period usually starts in February in the middle of the dry season and can last until July, when the rains yield a new harvest.

This is a region where it took a massive humanitarian response to avert famine earlier this year. Much of the food currently available in the local market has been smuggled in from Sudan, but few people can afford it. 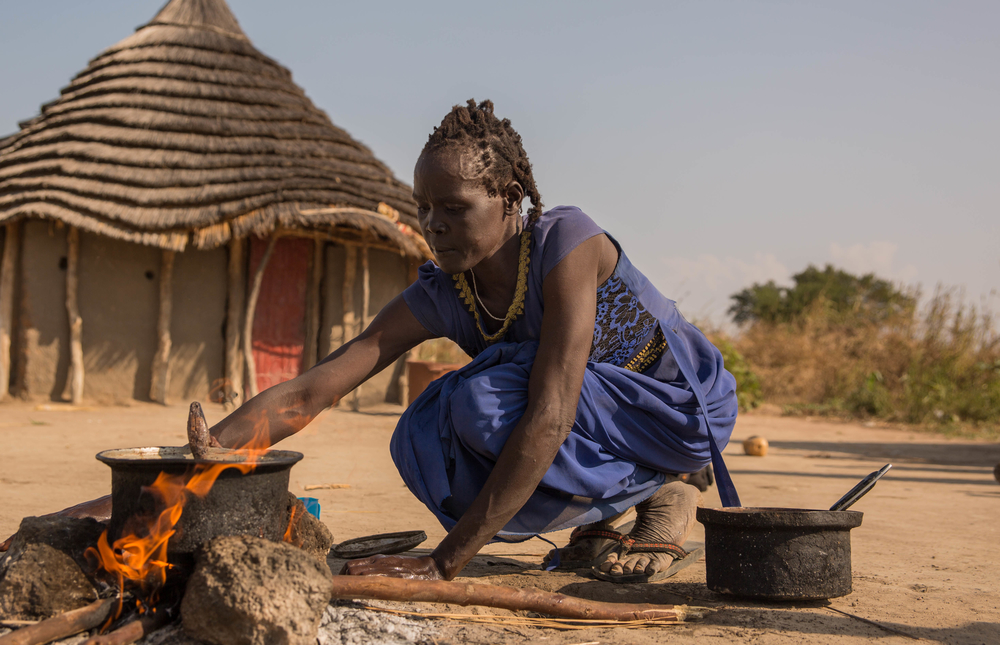 Much of her crop was destroyed by striga, a parasitic plant that regularly infests sorghum. Some of the sorghum was saved, but not enough to last through the hunger gap.

The family had only returned to the country three years ago, having initially fled north to the Sudanese capital, Khartoum, at the start of the civil war in 2013. They had hoped for a better homecoming.

“I wanted to give my children the chance to grow up here, but it hasn’t been easy since my husband’s death,” said Hiieu.

“Providing food for my family and taking care of them at the same time is almost impossible,” she explained, as she stirred a thin vegetable broth over an open fire.

The exhausted mother took a gamble, which she hopes will pay off.

“I joined a women’s farming group and it was a big success,” she told IRIN. “We were given tools and were taught how to grow vegetables. All produce was shared between the group’s members.”

She had to spend several weeks in training, with no choice but to leave her children at home under the supervision of her nine-year-old daughter.

“Awel took care of the younger ones and I would cook dinner as soon as I returned home,” said Hiieu.

Awel, with her ripped t-shirt and beaded bracelet, looks way too young to be able to take responsibility for a whole household of children.

“It was sometimes scary, but I knew that if something had happened, I had neighbours close by to call for help,” she explained. “I knew that mum would bring home vegetables for us to eat.”

The family currently survives on two meals of sorghum and dried okra a day. But this will likely fall to one with the progression of the dry season, and there is no money to buy food in the market.

“During the lean season – or hunger gap – [many] cases of malnutrition are observed,” said UN Food and Agriculture Organization nutrition specialist Nicholas Kerandi. “[In] places where food is extremely scarce and disease common, deaths of children often occur.”

The agency runs resilience programmes for farmers in Greater Aweil, including the women’s groups that Hiieu joined, where she receives seeds, tools, and training.

Adut Adak is only in her mid-twenties and has five children. The family eats little more than a plate of cooked sorghum each day, and she makes sure not a single grain goes to waste.

But as every nutritionist knows, a sorghum-only intake is not sustainable. It may fill the stomach, but it’s not a balanced diet.

“When proteins, vitamins, and minerals are lacking, the immune system will generally tend to weaken and individuals will be susceptible to disease,” FAO’s Kerandi explained. “Most children in sorghum-only areas are malnourished and their diet often affects their growth and can lead to stunting.” 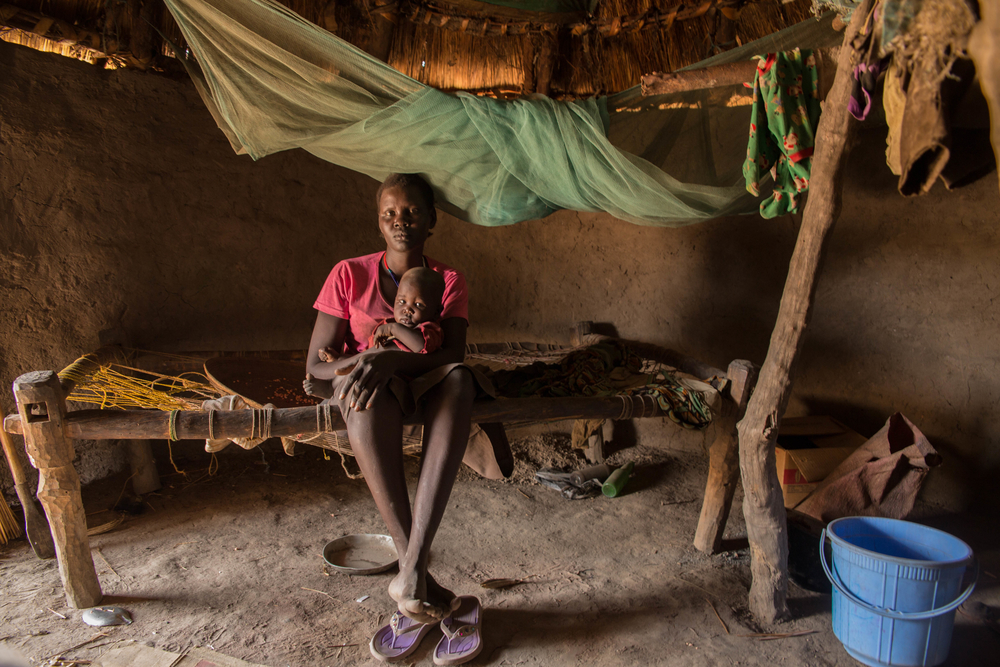 Stefanie Gilinski/IRIN
Adut Adak sits in her small mud hut. She young mother wasn’t able to harvest this year, but compensates by collecting and selling firewood and by making grass fences

But Adak has little else. Food is boiling over an open fire in her mud hut, wrapping the small room in thick smoke that slowly escapes through the cracks in the thatched roof.

Holding her youngest daughter, Amiir, on her lap, Adak sits on a wooden bed with an old mosquito net hanging over it.

“I’d like for my five children to go to school, but if we ever have money, it will be spent on food,” the young mother explained.

Things were so bad last year she was unable to plant sorghum and has nothing in store. Her husband left a few months ago to live with relatives in Sudan who feed him. She is on her own.

“I spend my mornings collecting firewood to sell in the market and my afternoons making fences out of dried grass. If I don’t sell any of it, my family goes hungry. That’s why I work as hard as I can,” she said quietly.

On a good day, they eat two portions of boiled sorghum, and sometimes Adak finds wild forest fruits, although they also have limited nutritional value.

But giving up is not in the nature of South Sudanese.

“My family might be hungry some days, but next year I will plant sorghum so that I can feed them,” Adak said. “Until then, I will work hard to make sure we have enough to survive.”