Noor Mohammed groans in pain as doctors push a needle into his withered vein.

He lies exhausted on a metal bed that has a cut-out hole in the middle of it and a plastic bucket underneath. His frail body is weakened by severe, constant diarrhoea.

Noor says he is the sole survivor of a family brutally killed by soldiers in Myanmar. When he fell ill, neighbours in Bangladesh’s swelling refugee camps carried him to a doctor. But now he’s alone.

Just a week earlier, the bustling 20-bed dysentery clinic he is recovering in was an empty warehouse. But relief efforts have to move fast in the Rohingya camps, where aid agencies are scrambling to construct a healthcare system in record time for the world’s fastest-growing refugee crisis.

While new health posts are sprouting up in the camps, the needs are immense. Vast distances and still-growing refugee numbers make delivering life-saving aid a monumental challenge.

More than 600,000 refugees have flocked into southern Bangladesh since 25 August, after a Rohingya militant group’s attacks in Myanmar’s Rakhine State triggered a brutal military crackdown. Refugees say they have survived killings and forced expulsions from their villages. Many are malnourished; most require some form of health assistance.

Many have set up tents in the existing Kutupalong camp, which has hosted previous waves of Rohingya refugees since the 1990s. But new settlements are mushrooming throughout Cox’s Bazar district. Clean water and sanitation are largely unavailable in many of the new sites, making the camps breeding grounds for dangerous infectious diseases. 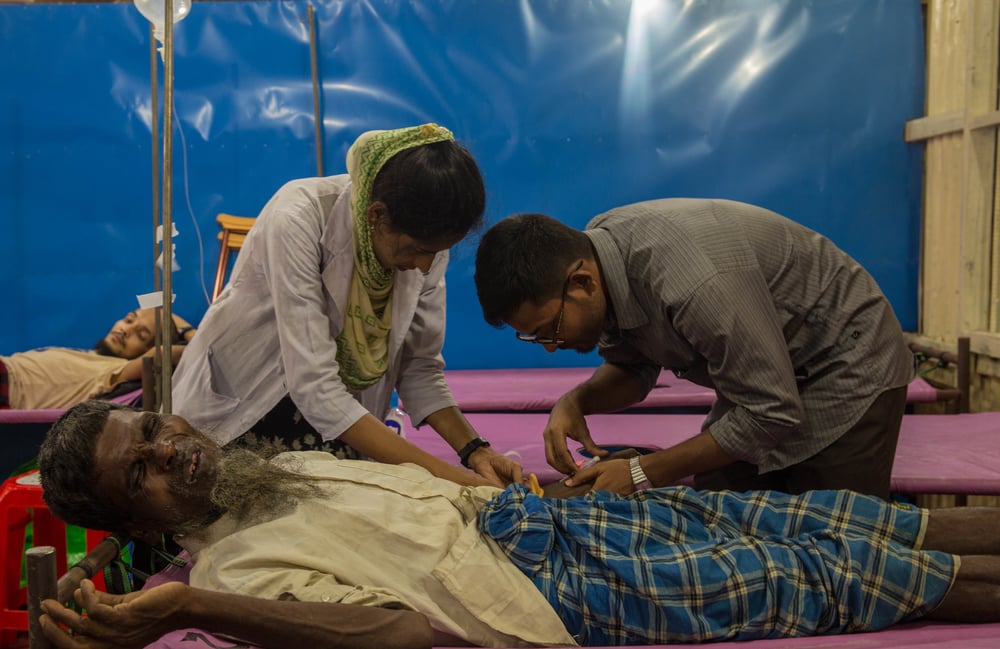 The magnitude of the sudden influx has made it impossible to reach all of the refugees. Aid groups in Cox’s Bazar estimate that about 300,000 people have received health services – half the number of new arrivals.

The government has set aside a large swathe of land to house most of the newly arrived refugees. Authorities and aid groups have earmarked one health post for every 14,000 camp residents. But while many refugees have already moved in, most of the health facilities have not.

“The Rohingya arrived quickly and before structures were put in place. The humanitarian community responded immediately to the crisis, but at this point many people had already settled,” said Frank Tyler of Medical Teams International, whose team runs the dysentery clinic where elderly Noor is being treated.

The in-patient facility was the first dysentery clinic to be set up in the camp; its 20 beds are somehow supposed to serve 50,000 refugees.

With such large numbers living in close quarters and with little access to proper sanitation, health officials fear the risk of disease outbreaks like measles and cholera. The World Health Organisation has warned of a “very highly likely” chance that small clusters of cholera will emerge. 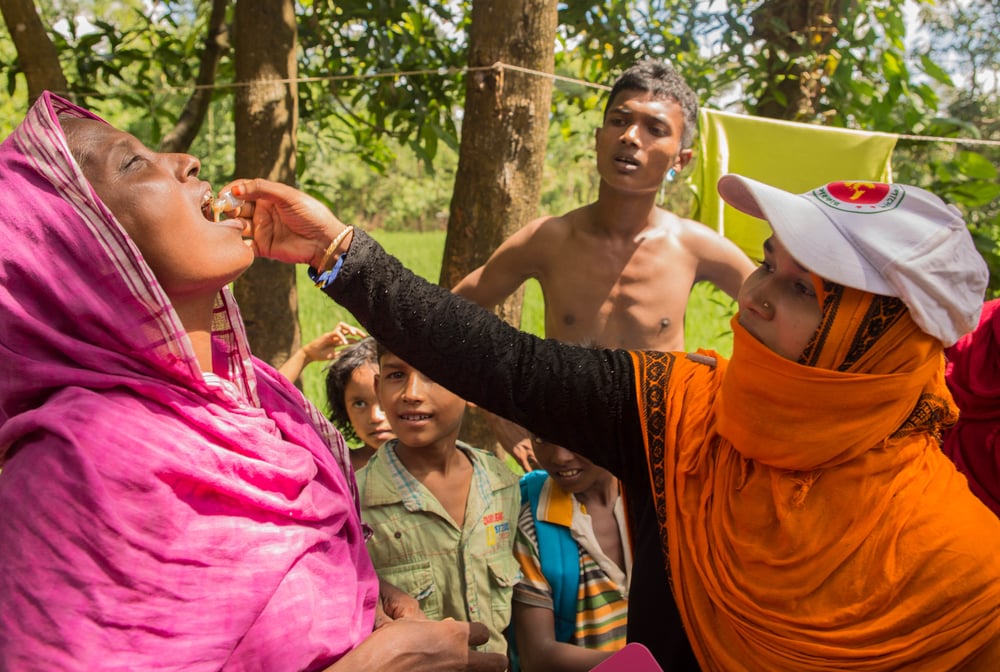 Stefanie Glinski/IRIN
Volunteers administer cholera vaccines to people in Rohingya refugee camps. Many of the volunteer teams walk hours into the camps to distribute the vaccine.

The teams who distribute the vaccines have to be hardy. Equipped with 500 doses in small glass containers, they hike deep into the muddy camps, walking for kilometres in the scorching sun to reach the most remote communities.

“The camp is a logistical challenge. We adjust our plans daily and remain flexible,” said Maya Vandenent, chief of health at UNICEF Bangladesh, which is coordinating the campaign with the WHO and Bangladesh’s Ministry of Health.

The rapidly evolving emergency has made it essential for the plethora of aid organisations in Cox’s Bazar to work together. Aid groups and UN agencies, which occasionally have overlapping mandates or competing priorities, are partnering across sectors to coordinate aid alongside the government. International groups are working with local organisations, while Bangladesh’s army has taken on a key role constructing parts of the new camp area.

“The situation in the camps has been catastrophic, and during the rainy season much of it wasn’t accessible by road at all,” said Rashed Hasan, a lieutenant colonel in the army.

Hasan stands outside an army tent where soldiers are screening patients and passing out medication. Behind him is another, seemingly nondescript white tent. Hasan is not allowed to enter it.

“It’s the maternity ward,” he said.

Inside the tent, Monura Begum sits on a bed with her newborn baby boy. He’s less than a day old and doesn’t have a name yet. Monura doesn’t comprehend how the local army can work with aid agencies to help people.

“The Burmese soldiers tortured us. I saw them raping many women in my village when I fled,” she said, holding her baby’s feet softly. “It’s very different here.” 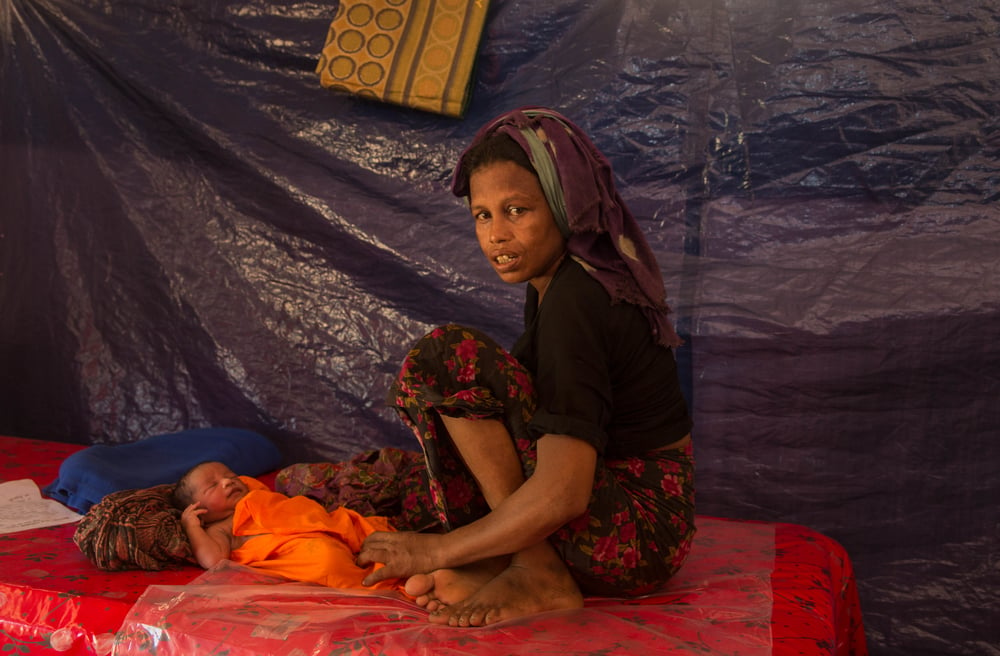 Stefanie Glinski/IRIN
Monura Begum recovers from giving birth to her son at a maternity ward in a refugee settlement in Bangladesh. The health facility is jointly run by Bangladesh’s army and BRAC, a locally based NGO.

The small maternity centre was planned and set up in less than two weeks.

“We have a delivery room and a resting area and at least five women give birth here every day,” said Laila Begum, a Rohingya refugee who was hired as a birth attendant by BRAC, a Bangladesh-based NGO that has partnered with the army to run the facility.

The camp’s biggest hospital, run by the International Federation of Red Cross and Red Crescent Societies, opened last week just down the road in Kutupalong.

The 60-bed clinic’s white tents sit in the shade of leafy rubber trees. The facility includes an operating theatre, a maternity ward, an out-patient department, as well as an isolation unit.

On its first day, the hospital had a stillbirth in the delivery room and a life-saving surgery in the operating theatre.

Eight-month-old Mohammed’s left lung had collapsed when his mother brought him in from a smaller clinic. But within hours he was recovering in the hospital’s paediatric ward, his mother sitting by his side in disbelief.

“My son was ill for many weeks. I know that he would have died. The doctors here have saved him,” Halima Khartoom said, watching fresh oxygen being pumped into her son’s now functioning lungs.

For healthcare providers, one basic challenge is just finding enough room to set up.

“Every piece of land is used by people already, so it was tough to find space and to ensure there is proper drainage,” said the IFRC’s Caroline Holt.

But while the hospital has already saved lives, the rapid refugee surge into Bangladesh will continue to test aid providers.

“The health sector is certainly overwhelmed by the big influx,” Holt said. “Even a 60-bed hospital in a scenario of almost 600,000 people can only do so much.”

Aid groups have turned to local communities – and refugees themselves – to help respond. A growing number of local Bangladeshis work as rickshaw ambulance drivers, employed by aid agencies to transport patients.

More than 1,000 Rohingya in the camps have been trained up as community health workers on the front lines of disease prevention. Equipped with gumboots and backpacks full of diarrhoea treatment and soap, they visit homes throughout the camps to spot diseases and refer severe cases to hospitals.

But vital health services have not reached everyone. 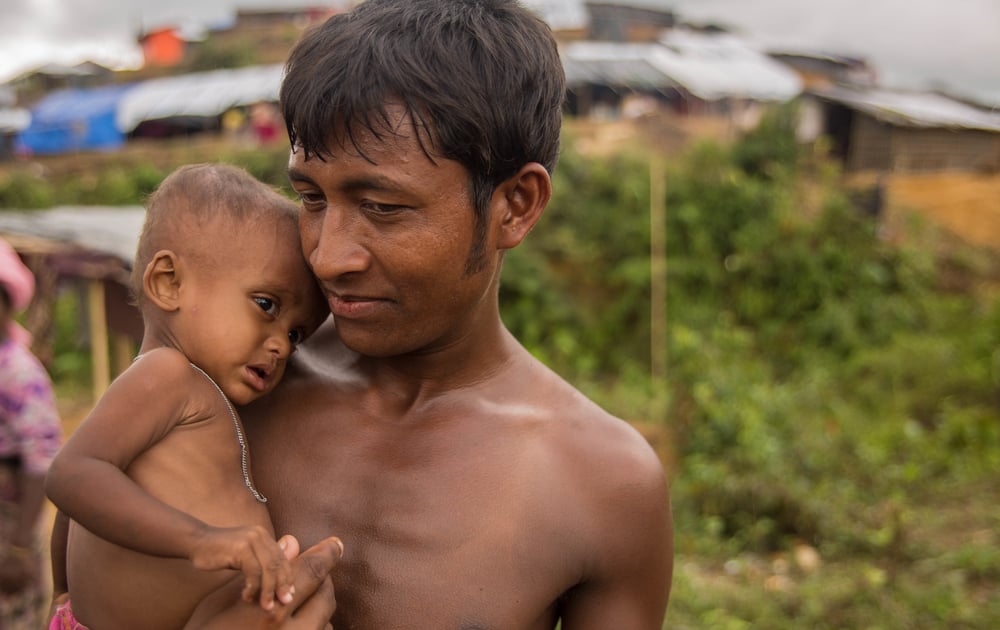 Stefanie Glinski/IRIN
Three-year-old Rohingya refugee Mohammed Nuan is malnourished, yet he and his father, Abdul, live far away from medical facilities in Bangladesh’s refugee camps.

Mohammed Nuan lives a several-hour walk away from the camp’s entrance, deep in Kutupalong’s muddy hills. His home is a simple plastic sheet, propped up with bamboo sticks.

He’s almost three years old, but severely malnourished. Hunger is widespread among the Rohingya and one in five children under five is likely malnourished, according to UNICEF.

“His mother was killed in Myanmar and I am now alone with my son,” explained Abdul, the toddler’s father, holding his frail son in his arms.

“I don’t know where to go for medical help. I’ve lost everything in Myanmar. Having my son alive with me is my hope.”