Kalobeyei was supposed to be different. Refugees here would be self-reliant. They would be integrated with the local community in a mutually beneficial arrangement of shared services and bustling markets. And it would all cost a lot less for Western aid donors.

But it hasn’t quite worked as planned.

Kalobeyei, in Kenya’s remote northwest, was built to decongest nearby Kakuma camp and attract the more entrepreneurially-minded refugees who could take advantage of the tiny plots of land on offer and trade with the local community.

The World Food Programme provides a $14 monthly cash allowance to each refugee*, which it says is enough to cover 80 percent of minimum needs. The 40,000 refugees are expected to supplement that stipend.

The problem is that Kalobeyei was established just as South Sudan’s civil war intensified. With Kakuma full, people have been arriving in Kalobeyei with little more than the clothes on their backs – and without the resources to make a go of it.

Jean-Marie Shamalima, who fled Burundi’s brutal civil war last year, is the kind of refugee Kalobeyei was designed to accommodate.

Beside his shack, constructed out of tarpaulin and corrugated iron, are rows of okra, beans, and spinach growing in a small sunken bed. It’s an incongruous sight in the middle of the arid Turkana region.

He arrived when the settlement opened, and his seeds were among the few possessions he brought with him.

Kalobeyei, built by the UN refugee agency, UNHCR, in conjunction with the local Turkana county government is an “integrated settlement”. That means it aims to provide economic benefits and services to host and refugee communities alike, including schools, hospitals, and marketplaces where Shamalima can sell his produce.

"It was difficult when we first arrived. There wasn't a lot of water available. But now things are improving and I'm growing lots of different vegetables," Shamalima said, gesturing proudly to his five-by-six-metre plot.

“I sell my spinach and okra in the market place,” he explained. “It provides me with an extra income so that I can buy clothes and seeds to grow more crops to sell.”

But even he struggles to make ends meet.

For other refugees it’s harder still. A 20-kilo bag of just maize flour, the staple carbohydrate – enough to last a family of five for a month – costs around $9 and one litre of oil is $2.50. Then there's all the other ingredients that go into a meal, plus the charcoal to cook the food, and the WFP allowance becomes increasingly stretched.

“I buy maize, beans, onions and oil with the money I get and it's barely enough for us to eat," South Sudanese refugee Mary Naduru, a mother of four, told IRIN.

Kalobeyei is a new model for Kenya. It is an acknowledgment that Kakuma, and the larger Dadaab camp in the northeast, are outmoded. They are in effect refugee islands sucking up dwindling donor aid.

Although the new looser settlement model doesn’t go as far as neighbouring Uganda, where refugees have free movement, the right to work, and access social services anywhere in the county, Kalobeyei offers a part-solution in a country where the politics of asylum is highly charged.

"The ultimate aim is to make Kalobeyei a self-serving, self-reliant settlement,” Neville Agoro of the Danish Refugee Council told IRIN. “The idea wasn't to make people rely on humanitarian agencies from the start.”

But there is a large wrinkle. “So long as we keep on bringing people who've just arrived from South Sudan, bringing them to Kalobeyei and trying to [introduce] self-reliance is not possible,” he added.

New arrivals get a patch of ground to grow food on, and that’s it – not even seeds and tools or training.

“They just tell us 'this is your house, this is your garden', and then just leave us to get on with it," said Mary Naduru, who fled South Sudan two months ago. 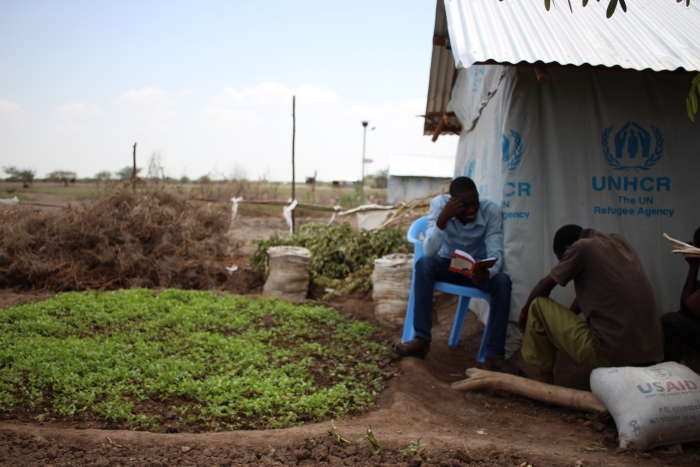 "I would like to plant vegetables here, but I don't have the money or the resources to buy seeds or tools,” said Mary Tioko, from drought-hit northern Uganda. “I really look forward to doing that, but it’s not an option for me at the moment.”

With no source of income other than WFP’s monthly cash transfer, Tioko often goes hungry, counting the days until the month is over.

"The money we get isn't enough to stretch across the family,” she told IRIN. “Food prices are expensive here, which makes things difficult for us. There's no food for us right now.”

And that’s not all. Turkana is dry, inhospitable land. Additional boreholes drilled to cope with the settlement’s expanding population have failed, coming up with saline water unfit for human consumption.

Land allocated to build the settlement was agreed by the local county government, community committee groups, and UNHCR, but is becoming an increasingly sore point between the local Turkana community and new refugee arrivals.

“I pray that I'm given more land so that I can grow more crops,” he told IRIN. “I'd like to try and grow other varieties of spinach as well as growing aubergines, but the land I have isn’t big enough.”

The politics of land distribution in Kenya is already a highly contentious issue, so it's unlikely that local politicians will allow refugees to own land outside designated areas like Kalobeyei.

The pastoralist Turkana have been historically marginalised, their region under-developed by successive governments in distant Nairobi. The Kalobeyei settlement has generated large expectations within the local community, who have seen their pastures and earnings shrink as a result of erratic rains.

“The project was supposed to be on a 50:50 basis,” said Rukia Lotinga, a village elder involved in community negotiations over the settlement. “The agreements were that anything the refugees got, the host community will have to benefit in the same, equal manner.”

That, she said, “is why we gave away our grazing land to the UN.”

But, she insisted, that the promise has not been honoured. “So far what’s been delivered is not enough. Refugees are getting development, but the host community hasn’t seen much.”

It’s a powerful perception of injustice, built up over the years of neglect by the authorities.

Though Turkana trade firewood, charcoal and animals with the refugees, they also worry about the long-term impact on the already resource-stretched environment around them.

“We won't stop cutting the trees because we need [money] to sustain our livelihoods,” said Lotinga. “[But] If the forest dies, so do our livestock, and we'll be finished ourselves unless we see support from aid agencies."

Despite her concerns, Lotinga believes that ultimately the Kalobeyei project can benefit both communities.

"We still want to benefit from having refugees around – that's not the issue,” she said. “If refugees were to leave Turkana, our people would really suffer."

* CORRECTION: An earlier version of this story incorrectly said that the WFP allowance was paid per household. The $14 allowance is paid per refugee.