The Catholic cathedral in Wau, South Sudan’s second largest city, is now a sanctuary for more than 10,000 people who have fled the country’s vicious civil war, but with insecurity rife and markets collapsed, help is scarce and food in short supply.

Saint Mary’s Cathedral, a solid red-brick building, soars above the many crowded makeshift shelters, pitched on whatever available ground can be found. Space is at such a premium that some people even sleep next to the church’s altar.

The official UN camp on the other side of the city is the most congested protection of civilians site in the country – almost 40,000 people shelter on 200,000 square metres of land (roughly the area of 25 football/soccer pitches).

Maria is disabled and elderly. Saint Mary’s, the largest church in South Sudan, has been home to her for longer than a year.

Shot in the hip during a cattle raid when she was six years old, her family was able to care for her until last year, when all were killed in an attack on their village. Maria was the sole survivor.

"Soldiers burned our houses, took our cattle, and almost murdered my whole village,” she told IRIN. “I don't know why I was spared, but I was left alone and helpless.”

Wau, in the country’s northwest, had initially been spared the violence when civil war broke out in 2013 between forces loyal to President Salva Kiir and rebels led by his former deputy, Riek Machar.

That is no longer the case.

In April this year, at least 16 civilians were killed by rampaging government soldiers in the city following an ambush that killed two of their commanders, allegedly committed by rebels belonging to the region’s Fertit ethnic group.

Wau was again purged in June by the army and allied militia in terrible scenes of violence. As many as 400 people may have been killed.

"Those who flee believe that even rebels still fear God and would not slaughter civilians in the backyard of a church," said the priest at Saint Mary’s, Moses Peter. "Many other churches have also taken in hundreds of people.” 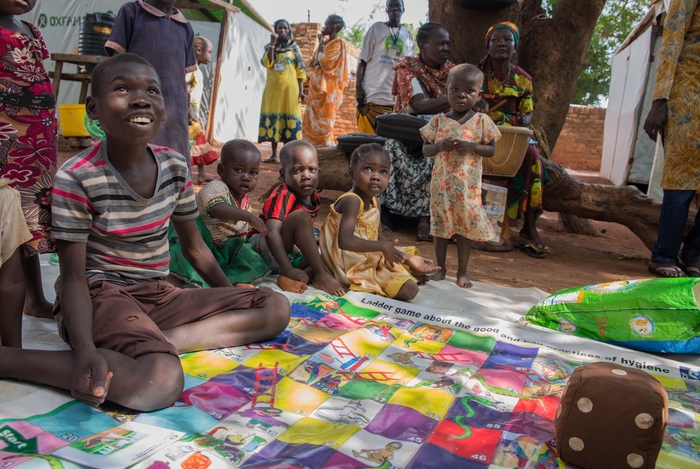 Saint Mary’s feels like a proper IDP camp, albeit with Christian murals on its walls.

International aid agencies have installed water pumps and latrines. There are classrooms, health facilities, even small shops and businesses in the compound.

What is lacking, though, is food aid.

“Collaboration between aid agencies, the church, and the local government works well here, but IDPs have become increasingly frustrated,” said Oxfam's Christina Corbett. “They receive non-food items such as soap and blankets, but they keep asking for food.”

It has been four months since the last food distribution by the World Food Programme. Deliveries were suspended after the death of three WFP porters in the April violence in the city, although rations are provided at the UN site.

Security at Saint Mary's is almost non-existent. There is a simple metal gate and a lone police officer for its protection.

"With the government’s full assurance of safety for our staff, we will ensure that people will receive food again," WFP's George Fominyen told IRIN.

Father Peter referenced a climate of growing tensions that has seen increased threats to relief workers.

"This puts an extra level of stress on aid staff and makes their work increasingly difficult – and unsafe," he said. "Between hunger and insecurity, people face a lot of pressure here.” 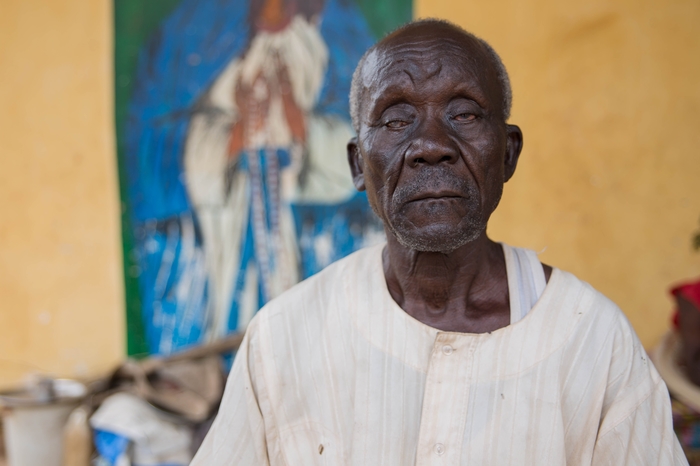 Stefanie Glinski/IRIN
Juda has gone blind over the past year

The frontline in the civil war is close – less than 30 kilometres from the city's outskirts. And given that some six million people in the countryside are also in need of food aid, nobody at Saint Mary’s will be going home anytime soon.

Hasan is a Sudanese trader who grew up in Wau. He said the food shortages were also a result of the collapse of the local economy, in what should be a highly fertile region.

"A lot of food is brought in from Sudan and there could be enough for all," he told IRIN, standing in his small shop, which was filled with more laundry detergent than food items.

"Inflation and conflict are the real issues,” Hasan said. “If people had money, food would be available to them. But with the ongoing war and most people having fled lootings, they are left with nothing."

In the meantime, the 61-year-old cathedral provides what succour it can.

Juda, an elderly man sitting in front of murals of African saints, has gone blind over the past year.

"I have nothing to return to, so I will wait here in the church,” he told IRIN. “I'm confident that food will come again soon, but I'm not confident about peace. If it doesn't come, I don't know if I'll ever have a place to call home again besides this church."