Yobieli is 12 years old. He sits on a small leather stool and fumbles with his hands, interlocking his fingers and pulling them apart. There’s a dark shadow of soft peach fuzz on his upper lip, and his cheeks are childishly smooth. But, his eyes look older. They take in the world around him with the measured calculation of an adult, not the innocent wonder of a child.

“I didn’t discuss leaving with my family. I only talked about it with my friends,” he tells me. “Because of the difficulties I was facing in my house, I decided to go alone.”

Yobieli is Eritrean. In August 2016 he fled his home, crossing borders and the desert on foot, unaccompanied by any adult relative or caretaker, only to arrive here: a neon-lit apartment in the rundown outskirts of Cairo, Egypt.

He is one of thousands of children to have undertaken similar journeys in recent years as part of what the UN has called the largest refugee crisis in history. Last year alone, 25,000 unaccompanied children arrived in Italy.

Eritreans were the single largest nationality. But only the ones who make it are counted. An untold number of others disappear and die along the way or, like Yobieli, end up stuck somewhere they never intended to stay. Young, alone and vulnerable, they have been exploited and abused and continue to face a dangerous and uncertain future.

“The main reason I left was poverty,” Yobieli says. But in Eritrea, poverty and politics are deeply intertwined. “My family was poor because my father was a soldier. He was taken to the army.”

Like all Eritrean adults, Yobieli’s father was conscripted into the country’s national service. On paper, conscription is supposed to last for 18 months. In reality, it stretches on indefinitely, essentially acting as a system of forced labour for recruits who receive next-to-no pay.

"I wanted to go anywhere I could feel safe"

National service is the primary reason why nearly 400,000 people – almost nine percent of Eritrea’s population – have fled in recent years, including a large number of unaccompanied children.

With Yobieli’s father gone, his mother was forced to work as a maid in other people’s homes. But the money was never enough. “I stopped going to school in grade four because of the difficulties with my family,” Yobieli says. Instead of attending classes, he tried to find work to help support his family as their situation continued to deteriorate.

But even at such a young age, he knew that not all children faced the same struggles. “I saw young people like me on TV going to school and having a good life, enjoying life. So I asked myself and my friends, ‘Why don’t we have the same life? Why are we living these difficulties?’” Yobieli says.

“We deserve to also have a good life like them. We want to go to school. We want to have a normal life… The only solution was to take a decision [to leave].” 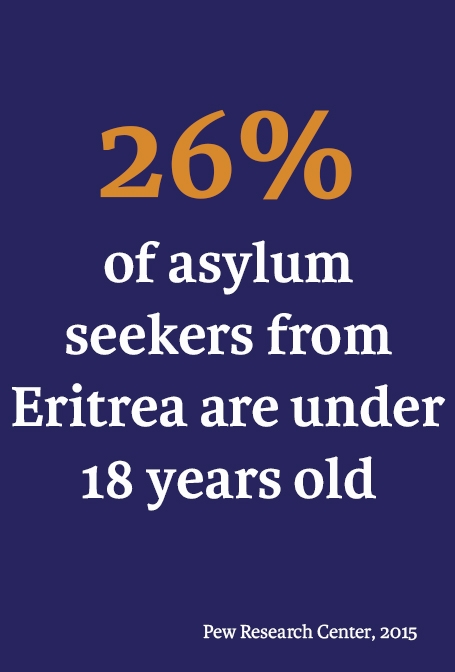 Once the decision was made, the first step was fairly easy. Yobieli’s village is close to Eritrea’s border with Sudan, and he was able to sneak across without the help of a smuggler. On the other side he faced a choice. Most migrants and refugees go to Libya where the chaos of civil war has allowed clandestine migration to flourish. But Libya is also notoriously dangerous. Extortion, kidnapping, rapes, beatings, and detention of migrants and refugees are all commonplace. Last year, more and more Eritreans were opting to come to Egypt to avoid these abuses.

“I heard that the situation in Libya is very difficult because of IS [so-called Islamic State] and the other armed groups and gangs,” says Yobieli. “For the sake of my safety, I decided to come to Egypt.”

The trip across the Sahara requires a smuggler and costs somewhere between $500 and $900. “I didn’t have any money,” Yobieli says. But, he was able to tag along with a group headed to Egypt. Some of the people he was travelling with convinced the smuggler to let him come for free because of his age.

“The trip was difficult,” Yobieli says. “We were hungry and thirsty… The situation was very bad. They used to threaten us with knives. They also beat some of us.” Yobieli was lucky. He wasn’t beaten and even says the smuggler treated him kindly.

Abel, a 17-year-old Eritrean also living alone in Cairo, wasn’t so fortunate. He fled Eritrea when he was 13, after receiving a draft notice for national service. “I didn’t have any other option other than to leave,” he says. After staying in a refugee camp in Ethiopia for almost three years without going to school, he decided to try to make it Europe.

Like Yobieli, he didn’t have enough money to pay for the journey from Sudan to Egypt. “In the middle of the trip the smugglers threatened me with a knife,” Abel says. “They said if I don’t pay them money they will kill me.”

Other Eritreans who Abel was travelling with called their relatives in Europe. They were able to gather enough money to pay the smuggler. Abel, who was 16 at the time, was able to complete the trip.

Zebib, a 16-year-old girl, broke down when I asked her about the journey from Sudan to Egypt. She left Eritrea in November last year, also to avoid national service. When I meet her in Cairo, she’s wearing a pink shirt with small, white hearts on it, the red nail polish on her fingers is chipped and her curly hair is tied in a messy bun.

She has a smooth, pretty face, but her eyes are burning and her voice is choked with anger. “I wanted to go anywhere I could feel safe,” she says, her voice rising and straining with emotion. “If you can help us, I will tell you everything. If you can’t help us…” She trails off as tears start pouring down her cheeks and she buries her face in her hands.

It’s impossible to know what Zebib experienced that made her break down because she won’t talk about it. But rape and sexual abuse are so common along the people smuggling routes from Sudan to Egypt and Libya that women often take injectable contraceptives before starting the journey, according to Swedish-Eritrean migration activist Meron Estefanos.

“A woman knows she will be raped at least three times before she reaches Europe,” Estefanos says. Young girls travelling alone are particularly vulnerable.

Cairo is no safe haven. “We are being treated very badly. When we go out to buy something, we are attacked and beaten,” Zebib says. A group of Egyptian men broke into the apartment where she stays with other Eritreans her age. “They fought with the boys and tried to rape and harass us,” Zebib says. Her lip quivers and she stops talking.

Yobieli also faces problems. “When I go to the shop, they don’t give me change. They beat me in the street,” he says, referring to Egyptians in the neighbourhood where he lives. “They’ve spat on my face. I’ve had money taken from me.” 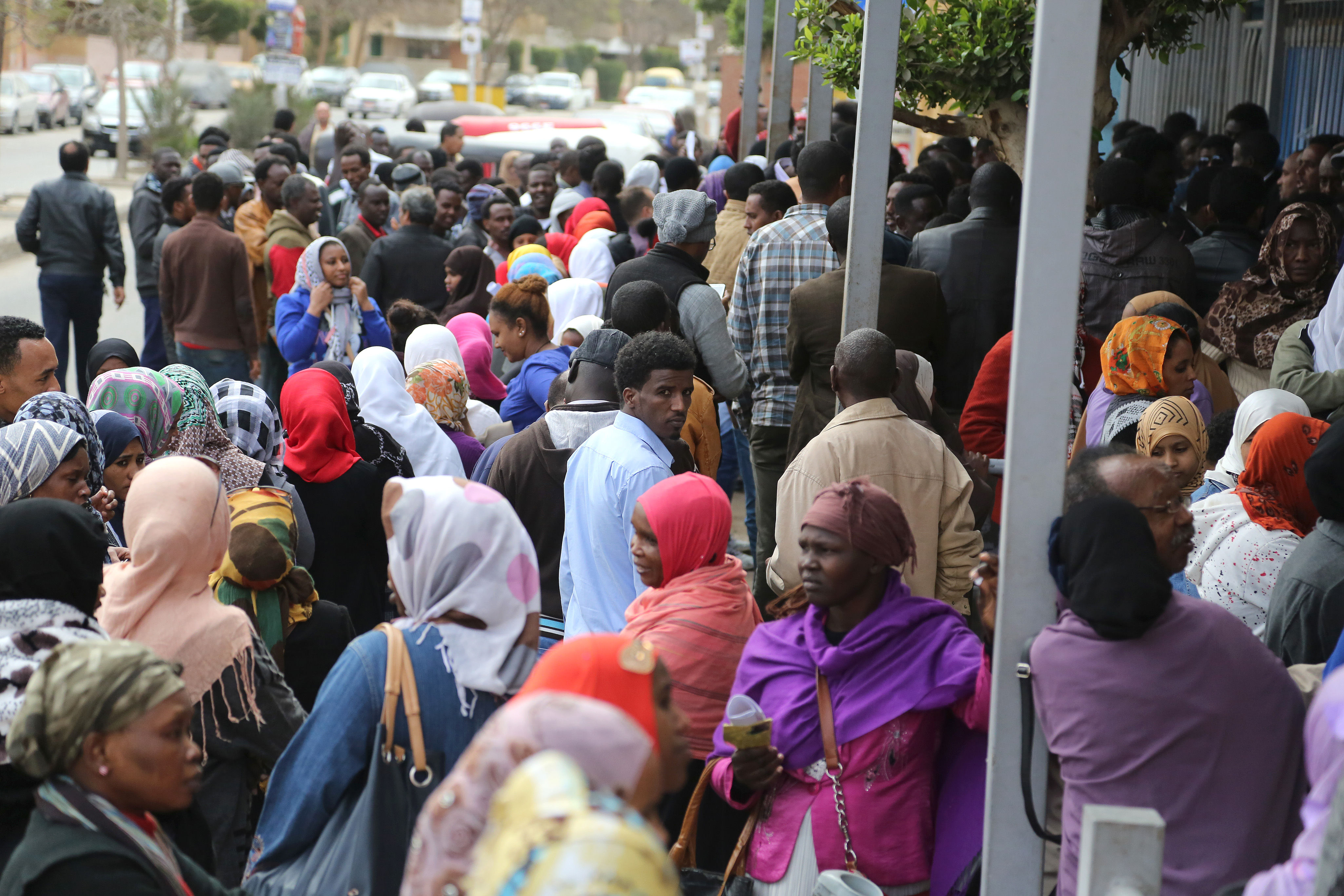 The living conditions are particularly difficult to tolerate because Yobieli, Zebib, and Abel never intended to stay here. What was supposed to be a brief stop on their way to Europe has now become their reality for the foreseeable future.

After more than 10,000 people arrived in Italy from Egypt last year, Egyptian authorities cracked down on clandestine migration. Now, there is no way for the roughly 8,000 Eritreans who are stuck here to leave without going through Libya, which they were trying to avoid in the first place.

“The way to Europe is blocked,” Yobieli says. “The way to Libya is very risky with IS and the armed groups. Also, living here in Egypt is very difficult… I’m hoping for the UNHCR (UN refugee agency) process.”

But UNHCR’s resettlement programme is slow, and the number of people being sent to third countries is small compared to those in need. Last year, 7,000 people were approved for resettlement from Egypt out of a refugee population of more than 260,000.

Children like Yobieli, Zebib, and Abel are faced with an impossible choice: Endure the harassment and abuse in Egypt while waiting on the slim chances of resettlement, or go to Libya where the situation is even worse but where they might be able to cross the sea.

More and more people are taking the second option, according to Estefanos, the migration activist. “Now, everyone is leaving,” she says. “They wasted nine months in Egypt.”

Zebib is desperate to leave. “We want to go from this country. We want protection,” she says. But she doesn’t have enough money to pay for a smuggler. “I’m dependent on others… I can’t do anything.”

While Yobieli is waiting on UNHCR’s resettlement process, he is attending classes offered by an NGO. “I want to finish school and to become a professor or an engineer or a doctor,” he says. “My plan was to reach Europe in order to improve my life and help my family.”

Sitting in the apartment on the outskirts of Cairo, that possibility seems far, far away. Yobieli’s two older siblings left Eritrea before him with the same ambitions. “My older brother is missing in Libya,” he says. “And my sister drowned in the sea.”