Hilal al-Asri brought his wife to a hospital in Yemen’s capital, Sana’a, nearly two weeks ago, expecting her cholera would be cleared up quickly and they’d be on their way.

Today, three of his five children share a bed next to hers, all of them hooked up to fluid drips in a makeshift ward hastily assembled to deal with an outbreak that has killed 206 and is suspected to have infected more than 17,200 since 27 April, according to the Ministry of Health’s latest count.

A nurse sits in a narrow corridor taking blood samples from new arrivals, all of them women and children in what is, in more ordinary times, a maternity hospital. Some patients lie on the floor. Children scream in pain, many of them shockingly thin. 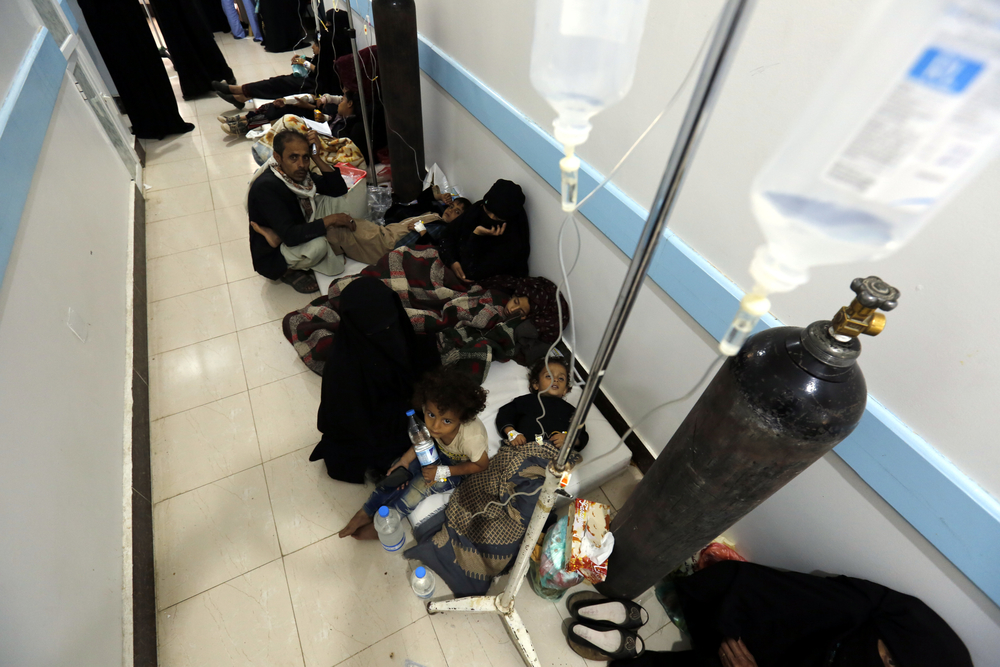 It’s “a disaster”, 35-year old al-Asri says, watching Yemen’s epidemic take hold of his family and home city at a speed that is deeply worrisome – Melissa McRae, medical coordinator at Médecins Sans Frontières, which alone has treated 1,670 patients, told IRIN she is “very concerned that the disease will continue to spread and become out of control”.

Those controlling the capital – an uneasy alliance of Houthi rebels and forces loyal to former president Ali Abdullah Saleh – have this week declared a “state of emergency” in the city, which alone has 4,000 cases of cholera.

Cholera should be an easy disease to treat and control – it takes rehydration, sometimes antibiotics, and containment. But after two years of war, the country and its capital are worn down, infrastructure is destroyed, and the outbreak is vividly and alarmingly exposing the dysfunction, decay, and desperation that have long been just beneath the surface.

A Saudi Arabia-led regional coalition began airstrikes in a bid to restore President Abd Rabbu Mansour Hadi to power in March 2015 – some 5,000 civilians fatalities have been counted, although the actual toll is thought to be far higher.

Sana’a, controlled by the Houthi-Saleh alliance since September 2014, has borne the brunt of the sustained aerial bombardment. But aside from the deaths, the bombs have left an indelible mark on the city in terms of infrastructure destroyed, hospitals no longer operational.

Some examples of the city’s degradation – the sort that have allowed cholera to take hold – are immediately evident. Garbage lies in piles on the streets, even in areas that are still relatively wealthy. Collectors have been on strike, protesting wages unpaid by the Houthi alliance. 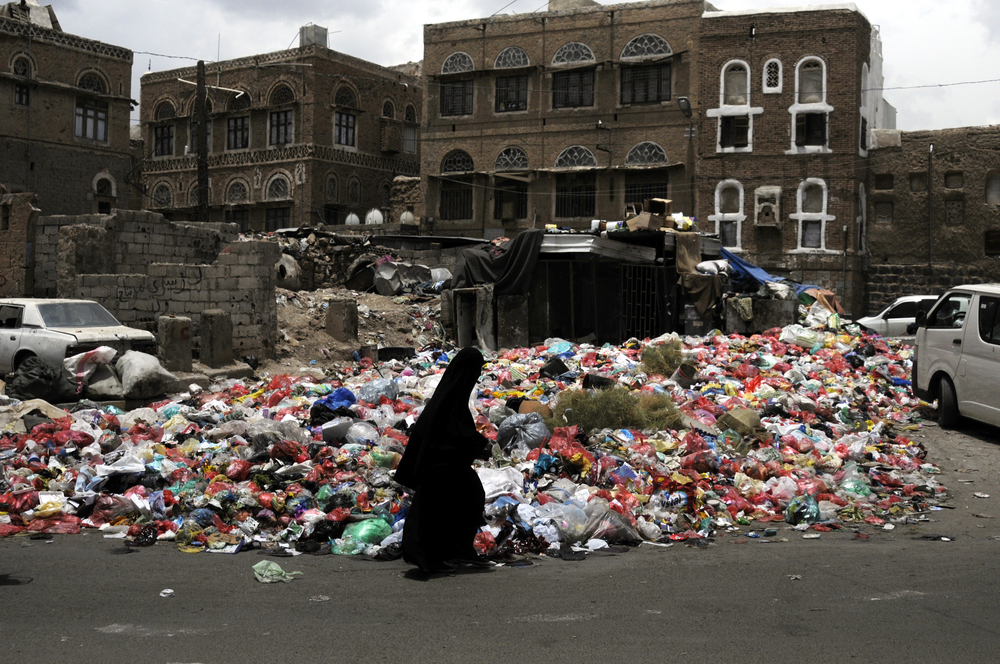 Other impacts of the war are less visible. The city has suffered less from the extreme hunger – nearing famine – that has gripped other parts of Yemen. People here are still extremely poor. Since Hadi’s government moved the Central Bank to its nominal power base in the southern city of Aden eight months ago, most of the country’s 1.2 million public sector workers – including doctors, teachers, and soldiers – have gone unpaid. But in Sana’a, at least, there have still been ways for an enterprising populace to hustle some kind of existence. The cholera epidemic is threatening to change that.

Al-Asri is worried that he won’t be able to afford his family’s treatment at al-Sabeen Hospital. It's a public facility and free, but patients must pay for medications not in stock. "It causes one so much anxiety,” he says.

Poor families are hosting displaced relatives (the war has driven an estimated two million Yemenis from their homes) and some are resorting to what aid agencies call “negative coping mechanisms”, of the kind that can foster cholera, in particular, according to UNICEF spokesman Mohammed al-Asaadi, “using water from untreated water sources”.

Al-Asaadi told IRIN that local sanitation systems are “struggling to operate and maintain liquid waste treatment and safe disposal systems”. And “in rural areas, open defecation is still the norm.”

Dominik Stillhart, director of operations for the International Committee of the Red Cross, told IRIN he had seen hospitals overflowing with potential patients, some facilities so overworked that patients were sitting with IV drips in courtyards, one man even taking his fluids in a car.

The cholera outbreak in Sana’a, and elsewhere is, Stillhart said, “very clearly a sign of how the conflict has brought the country to its knees.”

“In a protracted conflict, you have direct impact,” he said, referring to violent deaths and injuries: “these are the visible things that everybody focuses on.”

“But what we see less is the fact that because of the economich downturn, lack of credit line for traders, absence of payment for government workers… all of this is taking a very heavy toll. Every single Yemeni family is now affected by the conflict, and the [collapse] of the health system really epitomises this.”

For a country already fighting off famine, uncontrolled cholera could be the last straw.

“There is a big gap in the resources needed to respond to the crisis,” said UNICEF’s al-Asaadi, explaining that aid agencies are having to fill all the gaps as the Ministry of Health is virtually broke. UNICEF has helped al-Sabeen Hospital, for example, move patients out of hallways and into temporary wards.

Al-Asaadi, and other humanitarians, cited “big delays in bringing in supplies to Yemen… caused by the long clearance process on all sorts of imported medical supplies.” The protracted process involves clearance from both the UN and, depending on the point of entry, the Saudi-led coalition. This can take several weeks, if not months.

Ali Haidar, an assistant doctor in the cholera ward where al-Asri's family is being cared for, told IRIN the hospital was overstretched even before the outbreak and was now having to turn away patients who had developed kidney failure from severe untreated cholera. “Medical solutions [for IV etc.] are barely available,” he said. “And if we have them today, there won’t be any tomorrow.” 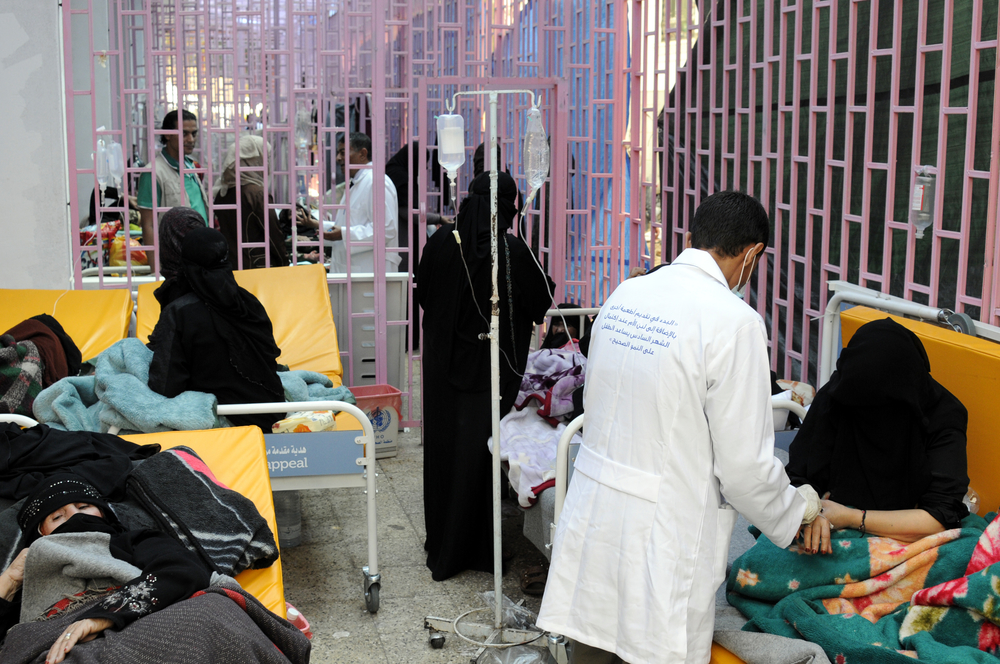 Some stopgaps are in place – aid agencies are handing out chlorine tablets quickly to stop the use of contaminated water (and may soon be stepping in to fill a gap that isn’t in their normal remit: garbage collection) – but this is a country woefully underprepared for a significant escalation in the cholera outbreak and badly struggling already.

In one unseen part of society – the country’s prisons – containment action needs to be taken quickly.

Stillhart mentioned Sana’a Central Prison, which he estimates holds 3,000 people in crowded conditions and where the ICC has counted six cholera cases already. This could be an ideal place for quick spread of the disease, he said, adding that the ICRC has already upped its work in detention centres like this to improve hygiene fast.

In a separate statement, Stillhart highlighted how thousands of families had no contact with relatives detained in connection with the conflict. "Enforced disappearances and allegations of ill-treatment and deteriorating conditions further add to the plight of detainees and to families' anxiety," he said. The potential of cholera festering in prisons is unlikely to ease their worries. Last year, the ICRC said it visited more than 11,000 detainees in Yemen and 250 Yemeni detainees in Saudi Arabia, but many still remain off-limits.

Rare in a conflict that has often been called forgotten, Stillhart pointed out that there has been a fair bit of media attention paid to the cholera epidemic. “That’s good news,” he said, explaining how the authorities were now facilitating the movement of intravenous fluids and rehydration salts – important in a country where the movement of aid workers has been extremely limited and in some places impossible.

The need to help Yemen prepare for the worst is made more urgent by the fact that the wet season, usually in July and August, is fast approaching.

“Without a rapid, coordinated, and decentralised response across the country, there is a risk of further spread, especially with ongoing heavy rains,” said MSF’s McRae .

But it’s not just the rain that threatens to get in the way of efforts to contain the cholera outbreak. Aid agencies have been warning for weeks that a predicted battle in the port city of Hodeida could be disastrous. Although many medications come through on UN flights, the vast majority of Yemen’s food and other supplies come in through Hodeida, where they already battle serious delays due to diminished capacity and sluggish screening.

Stillhart agreed: “It goes without saying that should the conflict intensify even further, especially along the Red Sea coast [where Hodeida is located], this is definitely going to make things worse, first and foremost for the people who are directly affected on the coast, but potentially also for imports of drugs … food staples.”

It’s a scenario no one wants to even imagine. 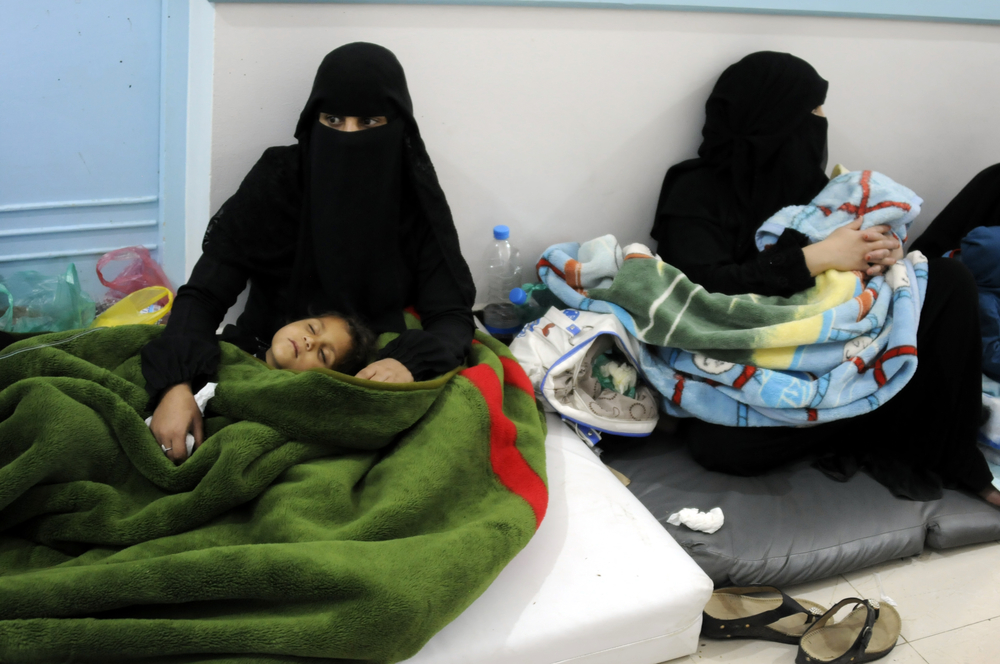 Mohammed Hamoud/IRIN
However, the battle could, at least in the minds of the Saudi-led coalition, bring them ever closer to Sana’a. There, even in the midst of the epidemic, is evidence of both grim political humour and conspiracy theory as Donald Trump prepares to fly to Riyadh on Friday on the first stop of his first overseas trip. On a drainage wall, a piece of graffiti reads: “Cholera is Trump’s gift to al-Saud ahead of his visit”. But Trump brings other gifts too. His administration is set to complete a deal worth more than $100 billion in weapons sales to Saudi Arabia.

(TOP PHOTO: A doctor tends to a young patient at al-Sabeen Hospital in Sana'a on 13 May 2017. Mohammed Hamoud/IRIN)