Ali and Abdelarahmen, 15-year-old cousins from Syria, pause on one of their regular weekend walks through central Hamburg to take a selfie together in front of the Alster canal – one of their favourite spots in the German city.

These walks are part of new routines they’ve built for themselves since arriving here as 12-year-olds in September 2014. Their selfies are not just acts of teenage expression. Ali and Abdelarahmen are among tens of thousands of unaccompanied child refugees in Europe who rely on pictures, messaging apps, and video calls to bridge the distance that separates them from their families.

Such separations are becoming longer as many EU states, including Germany, take an increasingly restrictive approach to the right of refugees, guaranteed by international and EU law, to be reunited with their immediate family. The impacts of such policies are being keenly felt both by the refugees urged to integrate without the support of their loved ones and by family members left behind struggling to adapt to prolonged separations from children and spouses.

Ali and Abdelarahmen and their families fled the violence in their Syrian hometown of Deraa for Jordan in 2012. But after two years in the northern Jordanian city of Irbid, their lives felt increasingly hopeless. Abdelarahmen’s father, Mohammad, worked illegally in a parking garage to supplement the family’s monthly aid allowance. His 10-year-old sister, Sara, the eldest of three girls bookended by two boys, was starting to fall behind in school. She needed extra tuition – something the family couldn’t afford.

Europe offered the hope of a brighter future for the children, but the costs and risks of the journey ruled out the possibility of travelling as a family. The two cousins knew of other boys who had set out as envoys for their families, making lives in Europe and then sending for parents, brothers, and sisters to join them later. As the eldest son and a standout student, Abdelarahmen was a natural choice to go ahead. He, Ali, and two other cousins set out from Jordan with a group of other Syrians in August 2014. They flew to Algeria and were driven to Tunis by a smuggler, who later abandoned them. Mohammad had to sell his wife Amal’s jewellery to finance the remainder of the boys’ journey to Libya and then across the Mediterranean. The trip cost $2,500 per boy: an eye-watering sum for a family living on a little over $250 a month.

Nearly three years later, Abdelarahmen is fluent in German and a big Justin Bieber fan. Living up to his academic promise, he recently started attending a German secondary school. His more reserved cousin, Ali, is passionate about football.

However, the prospect of seeing their parents again is no closer. If 2015 was the year of Willkommenskultur in Germany, 2016 was the year of a hardening policy stance towards refugees. The Federal Office for Migration and Refugees (BAMF) began issuing subsidiary protection rather than full refugee status to many asylum seekers. Subsidiary protection comes with a one-year residence permit instead of the three years granted to those with refugee status and, starting in March 2016, no right to family reunification for two years.

Germany is not alone in this shift.

“There is a general trend across EU member states to make family reunification more difficult, by lowering the level of rights given to subsidiary protection holders in comparison to those with refugee status,” explained Minos Mouzourakis of the Brussels-based European Council on Refugees and Exiles. “As subsidiary protection is less regulated than refugee status under EU law, states have more leeway to restrict rights attached to it.”

Sweden, Denmark, and Finland are among other countries that have applied similar measures. In the UK, unaccompanied minors with refugee status have no right to apply for family members to join them, and the government has rejected calls by campaigners to change that rule, arguing that it would create “perverse incentives” for more unaccompanied children to come to the country. Mouzourakis noted that in the case of Germany, changes in rights to family reunification have been accompanied by a steep increase in the use of subsidiary protection that has affected Syrians in particular. Less than one percent of Syrians were given subsidiary protection in 2015, compared to 42 percent the following year.

Ali and Abdelarahmen cut through the legal jargon in explaining their situation. Ali received a letter five months ago saying he could stay for a year (subsidiary protection). Abdelarahmen is still waiting for a decision on his status. Complex changes to Germany’s asylum system boil down to one thing for them: more uncertainty over when they will see their families. 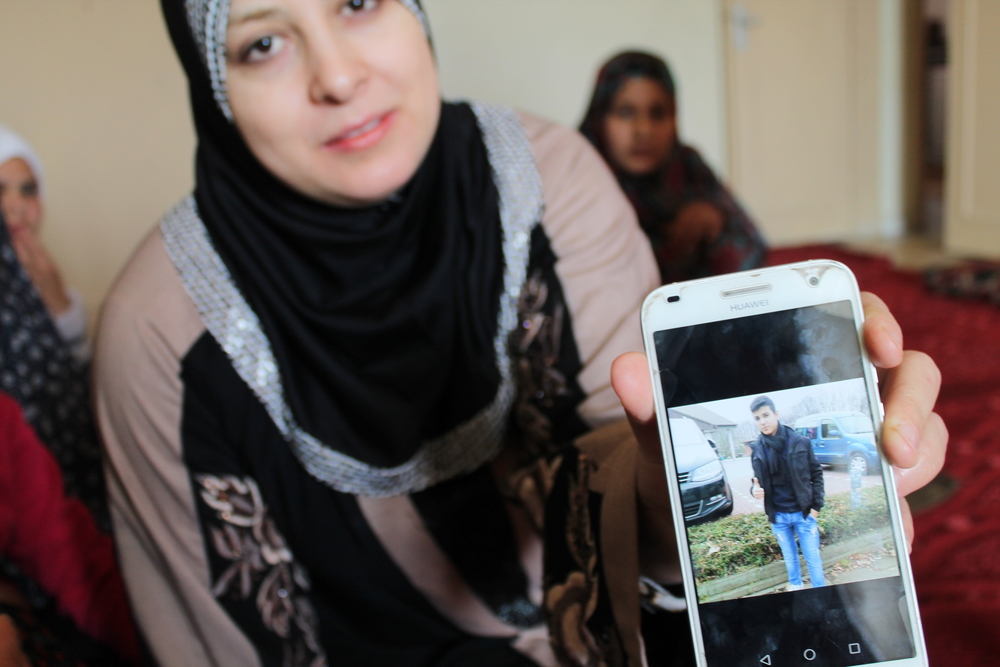 Sara Elizabeth Williams/IRIN
Ali's mother, Rahaf, shows a picture of her son in Germany on her phone

“After three years of waiting and hoping to reunify with our son, we found out that there is no reunification now,” said Ali’s mother, 34-year-old Rahaf, who lives with the rest of the family in Howwarah, a flat, featureless suburb of Irbid. “We are still hoping that next time our son will get a better residency that will allow for reunification.”

Abdelarahmen’s father Mohammad, brother to Rahaf’s husband, is more resigned to the possibility that they will never be able to join the boys in Germany and that their sons will grow up without them. “We don’t have a country now, so we want our son to have a good country,” he said.

Devout Sunni Muslims from conservative backgrounds, Mohammad and his wife, Amal, have little knowledge of the different culture their son is being exposed to at such a formative time in his life.

“No one will push my son to change his religion or change his culture,” said Amal. “My son has given me an idea of what life is like in Germany. He says life is nice, that everyone encourages education – this is all I want to know.”

Amal’s dream for Abdelarahmen is for him to study hard and become a doctor, but she worries that with no one to supervise him, he will lose his academic focus and drop out of school. 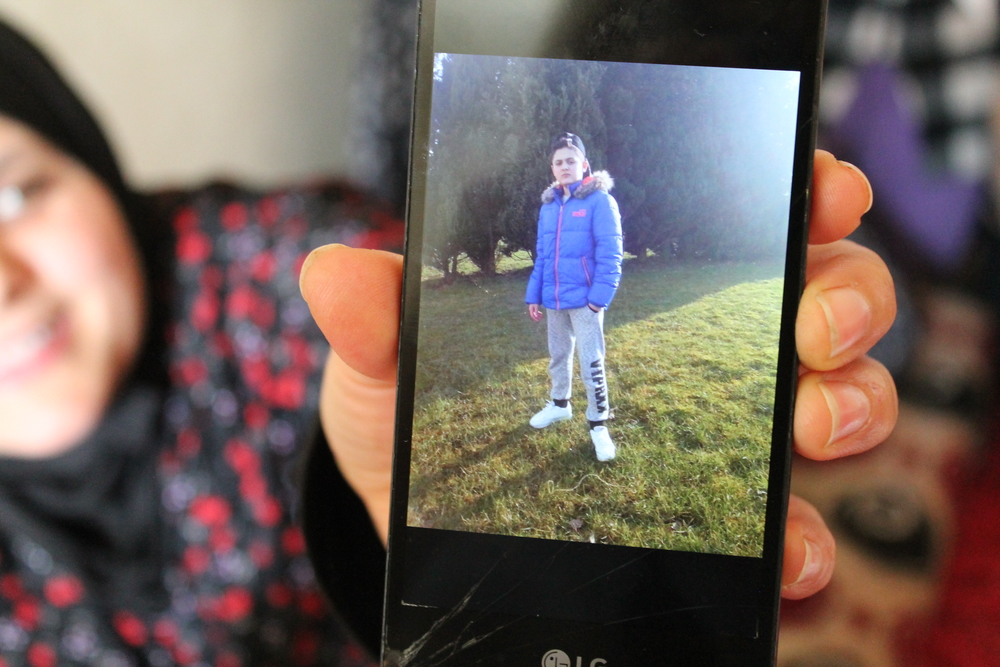 For his part, Abdelarahmen seems to recognise that education is his key to unlocking future opportunities in Germany. “In Daraa, it was too dangerous to go to school, and in Jordan we couldn’t afford it,” he told IRIN. “Here, there is no blood, no war. I get to walk in freedom and learn about things in biology like how an eye works.”

Outside school hours, the evenings and weekends can get lonely. The boys live separately, in shared homes run by social services for young people, mostly unaccompanied minors. They miss the simple intimacies of the family home: a kitchen that doesn’t get locked overnight, getting their mother’s help with homework.

“It is very hard when you don’t have your mother with you,” said Abdelarahmen. “Sometimes when I am alone, I feel so empty.”

Refugee organisations argue that being separated from their families affects the ability of refugees, especially vulnerable unaccompanied minors, to integrate in their host countries. “The family reunification issue speaks to the paradox of the refugee situation,” commented Mouzourakis. “On the one hand, you have moves to make it as difficult as possible to enter Europe, and on the other hand, integration is a buzzword across the continent. We are trying to square a circle. How are unaccompanied minors meant to integrate when their parents and siblings are back home?”

A new report, Separated Families: who stays, who goes, and why?, finds that families make the decision to send a family member ahead to Europe using irregular migration routes as a coping strategy and a last resort. They often under-estimate the amount of time refugee status determination and family reunion will take, especially as EU states implement ever more restrictive policies.

“We found that people's awareness of policies affecting migration – such as who is eligible for family reunification – was relatively high, but that their understanding of how these policies worked in practice was much lower,” said researcher Megan Passey, one of the authors of the report, which was conducted by REACH on behalf of the Mixed Migration Platform, a joint-NGO initiative.

The study, which surveyed 90 Syrian, Afghan, and Iraqi families left behind in five countries, found that in situations where the main earner went ahead to Europe, or where assets had been sold off to fund a journey, family members left behind often experienced financial hardships in addition to the psychological effects of prolonged separation from loved ones.

“Lengthy status determination and reunification processes have placed lives on hold, both in countries of arrival and back home,” write the authors.

Both Ali’s and Abdelarahmen’s parents seem completely unaware they would be forced to make such a choice should one of their sons become eligible for family reunion.

“I have the feeling we will be in Germany soon,” said Amal.