“I am very happy to be home,” said 18-year-old Mohammed Nyabally, sitting on the steps of his uncle’s house in Serekunda, a town near The Gambia’s coast.

Just two weeks earlier, he was languishing in a prison near Tripoli; his third spell in detention during the nine months he spent in Libya trying to board a boat to cross the Mediterranean.

Nyabally’s parents sold the family’s land to send him the $5,600 he needed to pay his way out of his first and second stints in detention and the smuggling fee for him and another relative to take a boat to Italy. But after being robbed by a street gang, he landed up back in one of the squalid and brutal detention camps that have sprung up all over lawless Libya and are used to extort ever greater sums from young migrants trying to reach Europe.

“Prison is very difficult,” the shy teenager told IRIN, speaking with a slight stutter. “I was beaten; many people were killed in that prison. I saw my friend shot dead because he tried to escape. Another Gambian boy I knew died too.”

When the International Organization for Migration visited the detention centre where he was being kept and gave him the choice of staying there or going back to Gambia, he opted for freedom.

“I didn’t want to stay in Libya,” he said. “The treatment of black people is very bad. I came back because it was too dangerous.”

Nyabally was one of 140 Gambians aboard IOM’s first chartered flight from Libya to Banjul on 10 March. A second flight from Libya carrying 170 stranded Gambians is due to arrive on 4 April, while another 290 have signed up for IOM’s EU-funded voluntary return programme.

The Gambia is one of Africa’s smallest nations, with a population of just under two million. And yet its citizens have consistently ranked among the top five nationalities taking the Central Mediterranean route from Libya to Italy. Until recently, the potential for convincing Gambians not to risk the “back way” to Europe was limited. That changed in January, when the country’s first democratically elected president Adama Barrow took office and former president Yahya Jammeh was exiled after a six-week political impasse.

Jammeh, who held onto power for 22 years, had viewed migration as unpatriotic and refused to accept that young people were leaving the country to escape poverty and his autocratic rule. Even those migrants who didn’t find what they were looking for in Europe were reluctant to return home.

By contrast, the new coalition government has made tackling irregular migration a priority. It plans to focus on creating jobs and training opportunities to reduce the 40 percent unemployment rate among young people, the main push factor behind The Gambia’s exodus.

“The improved political situation and stability in The Gambia is one of the factors that’s helping migrants to take this decision [to return from Libya],” said Michele Bombassei, IOM regional migrant assistance specialist.

For the government, creating an environment that positively reduces migration is a matter of urgency. According to UNICEF, which analysed Italian immigration data, nearly 0.5 percent of The Gambia’s population migrate every year – the highest rate in Africa.

The Gambia also ranks highest among sub-Saharan African countries in terms of the numbers of its migrants who are unaccompanied minors. In 2016, 13 percent of unaccompanied children arriving in Italy were Gambian, according to UNICEF. In total, nearly 12,000 Gambians arrived in Italy via the Mediterranean in 2016, a 36 percent increase from 2015.

“The back-way trend is only going to be addressed if there are policies to attract the young people to come back and fulfil their dreams,” Employment Minister Isatou Touray told IRIN.

With an estimated inherited debt of more than $1 billion, the new government has been shoring up international donor support to kick-start development stalled for decades by Jammeh’s isolationist policies.

This has included restoring cooperation with the EU. Jammeh expelled the EU’s charge d’affaires in 2015 just as tentative talks were under way to restore aid frozen over human rights concerns.

“It made it impossible to roll out programmes,” explained Attila Lajos, the EU’s ambassador to The Gambia.

“Jammeh’s government ignored the existence of migration… now we have absolute engagement across the government. They are open to exploring avenues on how to address the root causes of migration.”

Brussels has seized the opportunity to work with the new government on reducing the number of Gambians heading for Europe. It has already pledged a total aid package of 225 million euros, some of which will go towards projects aimed at encouraging economic growth and employment opportunities.

Neven Mimica, EU commissioner for international cooperation and development, made his first diplomatic visit to The Gambia in February, and on 16 March President Barrow met Mimica and foreign affairs chief Federica Mogherini in Brussels to discuss the aid package and cooperation on migration.

With 11 million euros in funding from the EU’s Emergency Trust Fund for Africa, a four-year project to deter migration through vocational skills training has already been launched.

While jobs and skills creation programmes may only yield results after many years, Lajos suggested that work on increasing voluntary returns and re-admissions of Gambian migrants stuck in transit could have “an immediate impact on reducing migration to Europe”.

Convincing migrants already en route to Europe to return home will be the focus of a regional project covering 14 countries expected to begin in May, also with funding from the Emergency Trust Fund. It will be the first of its kind run by IOM and will include a 3.9-million-euro programme targeting Gambian migrants.

But, if this approach is to succeed, much more needs to be done to support returnees, said Lamin Darboe, executive director of the National Youth Council.

The NYC runs an IOM-funded livelihoods programme for returnees that focuses on developing livelihoods from selling ocean-caught fish to communities inland where demand is high. But Darboe said, so far at least, its impact has been limited.

Ebrima Sisoho, 35, has been part of the programme since returning from Libya last September, after two failed attempts to reach Europe. He received a start-up grant to buy fish stocks and shares a refrigerated vehicle with nine other returnees. But after divvying up their weekly profits, what he earns amounts to little more than the price of a bag of rice.

“It’s a nice project, but at the moment it’s not really benefitting me,” said Sisoho, whose main living is still selling second-hand clothes from a wheelbarrow. “It’s given me ideas for making a business. If I could, I would buy a motorbike and do this on my own.” 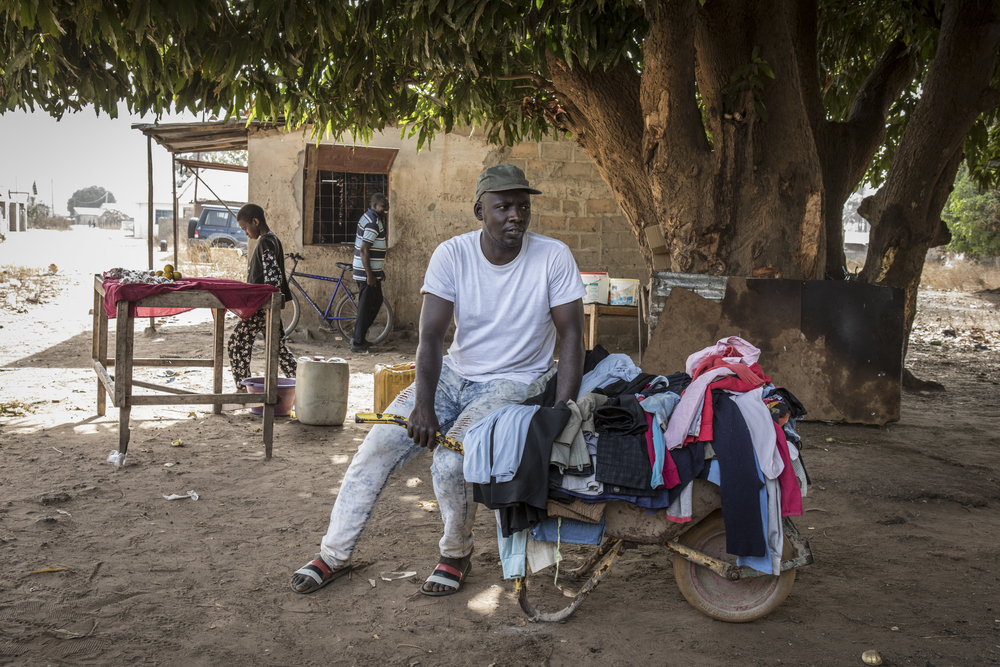 Effective reintegration needs to go deeper than start-up funds, said Darboe. Many returnees face stigma and blame from their communities for coming back empty-handed, often after having sunk their families into debt. Some are also suffering psychological trauma from their experiences in Libya and elsewhere along the route.

“The degree of reintegration support will go a long way in determining whether the returnees will stay here or plan to return,” said Darboe, who noted that past initiatives have merely enabled some returnees to attempt the back way again.

He added that if the harrowing experiences of the recent repatriates from Libya could be shared with their communities, perceptions of the risks that accompany irregular migration might change.

Nyabally’s uncle, Alieu, agreed: “I think experiences like Mohammed’s will discourage others from taking the back way because the rate of failure is much higher than the success.”

Time will tell whether becoming a democracy will reverse Gambia’s back way trend or only temporarily reduce Europe’s appeal.

“There is an overall feeling of ‘let’s stay here and do our bit for Gambia’,” said Bombassei of IOM. “How long this will last will depend on how quickly the economic situation improves.”

(TOP PHOTO: Mohammed Nyabally, 18, is one of 140 Gambians who recently abandoned their dreams of reaching Europe and accepted voluntary return from Libya. Jason Florio/IRIN)